While statues of Nelson Mandela and Gandhi will remain covered during Emmanuel Macron’s visit to London, a team of workers set about removing the protective box around the former Prime Minister today.

The statues were boarded up, along with the Cenotaph, ahead of protests which saw far-right demonstrators clash with police as they took over areas near the Palace of Westminster and Trafalgar Square on Saturday.

In London, the statue of former prime minister Sir Winston was daubed with graffiti accusing him of being a racist, while the monument of the slave trader Edward Colston was toppled in Bristol.

The scenes came amid increasing Black Lives Matter protests across the nation following the death of George Floyd in Minneapolis on May 25. 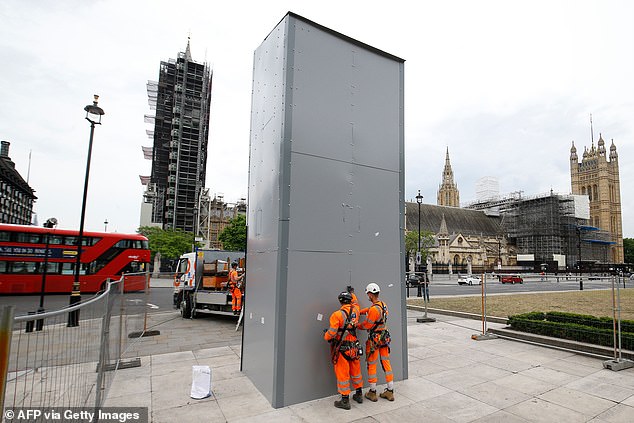 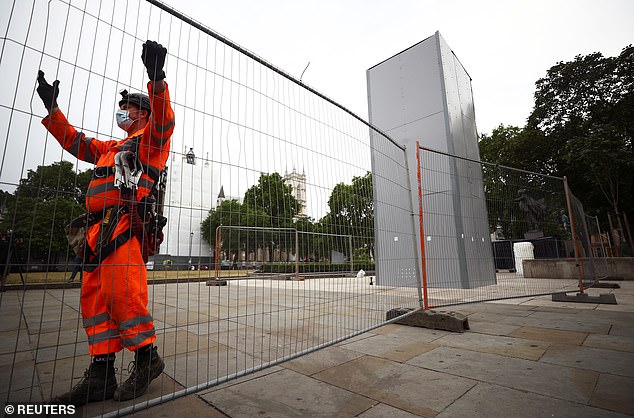 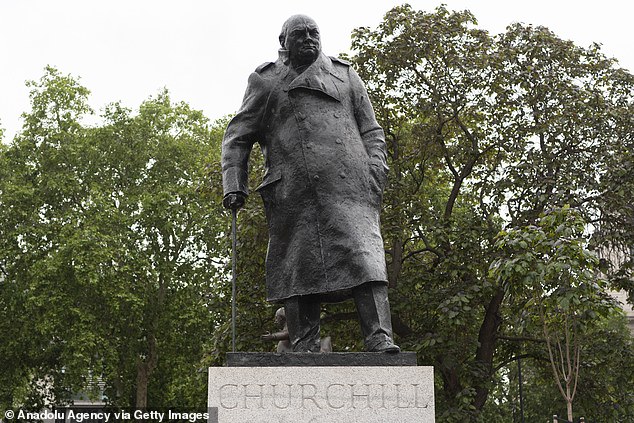 The Mayor’s office today confirmed to MailOnline the boarding would be removed before Mr Macron’s visit, but refused to say at what time this would happen. The boards around the statutes of Gandhi and Mandela will stay pending a ‘review’.

A spokesperson said: ‘The covering around the Winston Churchill statue will be removed for the visit of President Macron to London.

‘But the protective coverings around the statues of Mandela and Gandhi, which the mayor is also responsible for, will stay in place ‘under review’.

English Heritage said the boards around the Cenotaph were taken down on Monday night.

A DBR worker, who went by the name of Winston and who was originally tasked with removing the graffiti from Sir Winston’s statue, fears it could take ‘all night’ to remove the vandalism which is set deep into the rough stone.

The DBR London worker said: ‘I’ve already got the paint out, but the ghosting is still there.

‘It’s rough granite so it’s going to be difficult to get into the actual stone itself. I think it’s going to take all night. I’m not happy honestly, because I’d rather be sleeping.’

He denied feeling time pressure that comes with the President’s arrival, adding: ‘I know Macron is going to look at the stature, but there’s no pressure. It’s a job like any other.’

Winston has cleaned graffiti across London since 2006 and says that his job doesn’t allow him to take political sides.

He said: ‘I’m not allowed to voice political views. It doesn’t matter who put on the graffiti. As I said already, it’s just a job. At the end of the day, it happens all the time.’

The Prime Minister previously said it was ‘absurd and wrong’ to have to cover the statue of a ‘national hero’ to protect it from attack.

On the day it was boarded up, Mr Johnson said: ‘What makes me sad about what’s happening today is that you’ve got a situation in which the statue of Winston Churchill, who is a national hero, has had to be boarded up for fear of violent attack. That to me is both absurd and wrong.’

The French premier’s visit marks the 80th anniversary of General Charles de Gaulle’s appeal to the French population to resist the German occupation of France during the Second World War.

His rallying call was broadcast on the BBC in June 1940, when he said: ‘I call upon all Frenchmen who want to remain free to listen to my voice and follow me.’

Culture Secretary Oliver Dowden said it was ‘important’ for boarding around the Churchill statue to be removed ahead of Mr Macron’s visit. 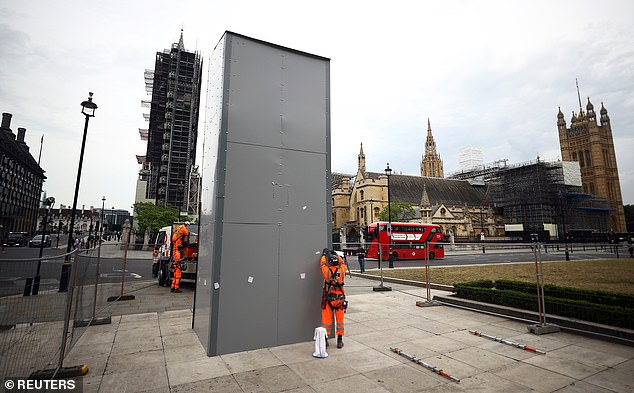 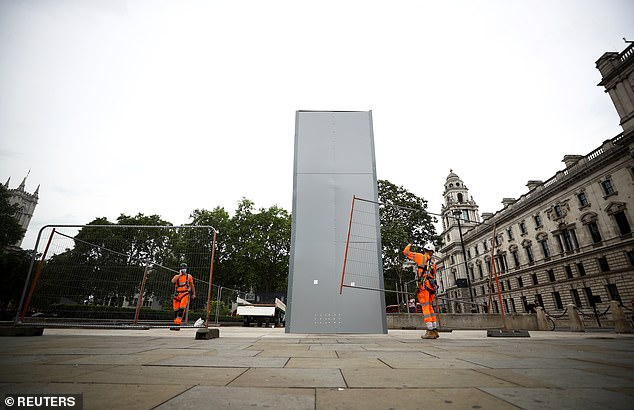 ‘To have Churchill covered up at that point would not be a great look,’ he told the daily Downing Street briefing.

Mr Macron will be welcomed to London with a ceremonial Guard of Honour from The Coldstream Guards at Clarence House and a flypast by the RAF’s Red Arrows alongside their French counterparts, La Patrouille de France.

Mr Khan was forced to defend his decision to cover Churchill’s statue in Parliament Square after criticism from the Home Secretary.

‘We should free Churchill, a hero of our nation, who fought against fascism and racism in this country and Europe.

‘He has given us the freedom to live our lives the way we do today,’ Priti Patel told the Daily Mail.

‘We have seen the desecration of war memorials, which is thoroughly unacceptable.

‘Now we’re seeing a national hero being boarded up.’

And the Prime Minister used an article in the Daily Telegraph to defend the statue and warn against attempts to ‘photoshop’ Britain’s cultural landscape.

He lauded Churchill as ‘one of the country’s greatest ever leaders’, saying it was the ‘height of lunacy’ to accuse him of racism.

‘I will resist with every breath in my body any attempt to remove that statue from Parliament Square, and the sooner his protective shielding comes off the better,’ he wrote.

However, Mr Khan said the decision to protect the statues in Parliament Square was a ‘wise’ precaution, fearing they could become a ‘flashpoint for violence’ involving extreme far-right protesters.

Those attending Saturday’s demonstration claimed to be guarding the statue of Winston Churchill as well as the Cenotaph.

The trip will be Macron’s first outside France since the coronavirus crisis erupted in earnest. The French leader has been criticised in some quarters for his bellicose rhetoric on the virus, declaring that France was ‘at war’ with COVID-19. 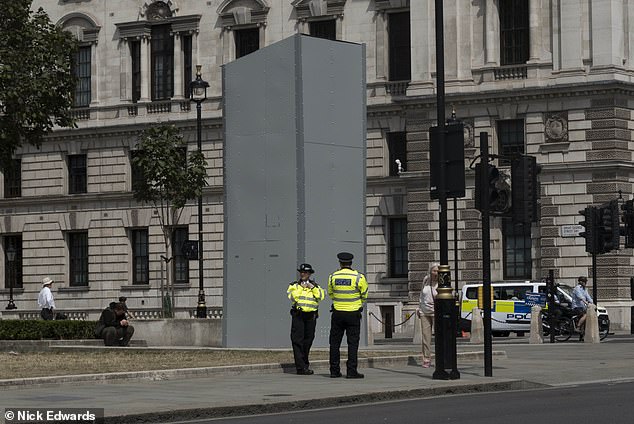 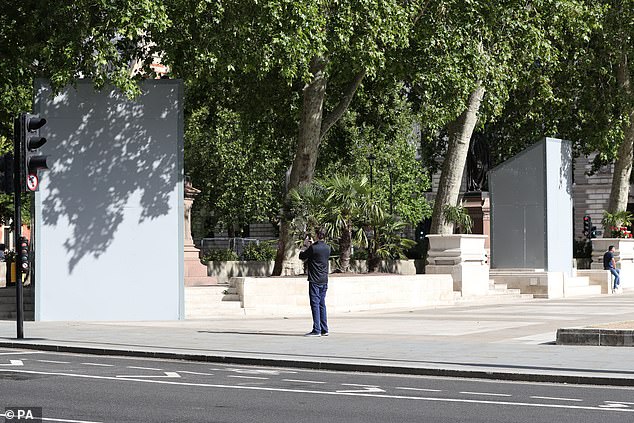 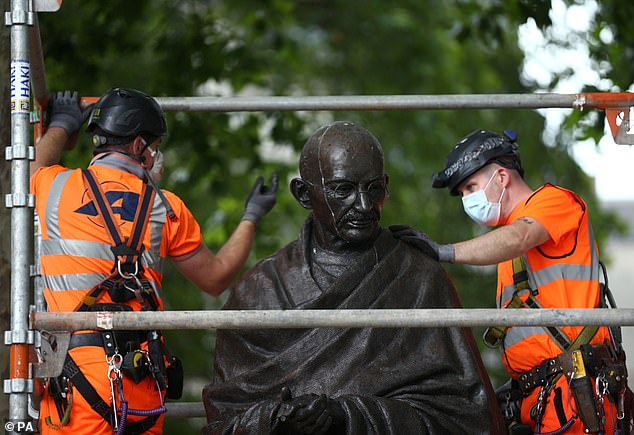 The Gandhi statue before it was boarded up. The Mayor’s office will ‘review’ when it can be revealed

The situation has improved sufficiently for Macron to say that France could claim its ‘first victory’.

Macron, who displays de Gaulle’s war memoirs on his desk in his official photograph, is making much of 2020 as an anniversary year for the French resistance leader who would later become president of post-occupation France.

In May, he paid tribute to de Gaulle at the site of the 1940 Battle of Montcornet, one of few effective counter-attacks by French soldiers against the Nazis and where de Gaulle made his name as a military commander. 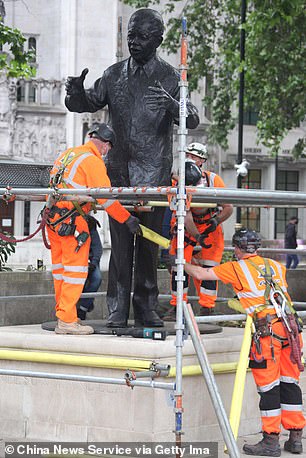 On November 9, Macron is to mark the 50th anniversary of the general’s death by visiting his final resting place in Colombey-les-Deux-Eglises, eastern France.

Before heading to Britain, Macron will take part in the traditional annual ceremony at Mont Valerien outside Paris, a memorial for the French who fought against the Nazis and those who were killed by the occupying forces.

He will then travel to London, where his status as a visiting foreign dignitary will spare him the controversial two-week virus quarantine now demanded by the British authorities of all visitors from abroad, a move that has irritated Paris.

He will award the Legion of Honour to London, making it the seventh city to be decorated with France’s highest order of merit, after Algiers, Belgrade, Brazzaville, Liege, Luxembourg and Volgograd.

Britain, which left the EU in January, is negotiating a trade deal to govern relations after December 31, when it stops abiding by EU rules. Macron has on occasion expressed impatience with the drawn-out Brexit process.

Foreign Minister Jean-Yves Le Drian said in an interview with the French daily La Croix to be published on Wednesday that he still did not rule out a ‘no deal’ scenario.

He said the UK could not have ‘a foot in and a foot out’ of the EU and may not have ‘understood the full magnitude of their withdrawal’. 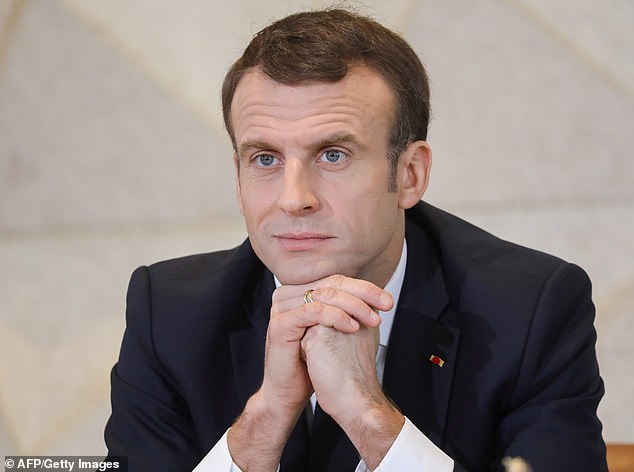 French President Emmanuel Macron in December 2018. Macron will visit London on Thursday, which will be the 80th anniversary of a speech made by Charles de Gaulle after he was exiled from France during WWII 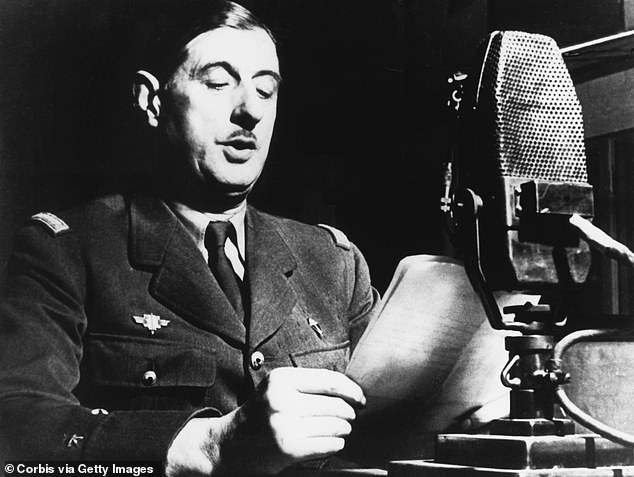 General Charles de Gaulle issues a call to the French people from London, England, June 18, 1940, just after the Nazi occupation of France. De Gaulle led the Free French Forces from London and later from Algiers throughout the occupation, and returned to Paris on its liberation in September 1944

In his radio broadcast from London, de Gaulle urged all those who could to carry on fighting for France, words that laid the foundation of the resistance movement and helped keep alive hope that France would be liberated, as it finally was in 1944.

‘Has the last word been said? Should hope disappear? Is the defeat final? No! Believe me, I… tell you that nothing is lost for France,’ he said.

De Gaulle’s iconic stature and his defiant wartime spirit are being tapped into even more during the unprecedented challenges posed by the epidemic.

In a telling reflection of his status, the vandalisation of a bust of the general in northern France this week was met with a torrent of outrage. The statue in Hautmont was daubed in orange paint and with the slogan ‘slaver’.

‘De Gaulle was neither on the left nor on the right… He was above the parties,’ said French historian Michel Winock, author of a book on de Gaulle.

But he was also simply ‘a legendary hero, the man of June 18, the defiant fighter who embodies an epic, glorious France, an incorruptible man who never mixed up public money and his own account’, Winock said.