A former security guard who narrowly avoided a hail of bullets outside Prahran’s Love Machine nightclub, which claimed the lives of another guard and a patron, has had a WorkCover claim rejected despite suffering debilitating psychological injuries.

The father of two was denied compensation by WorkCover after it determined he was not covered by a valid employment contract because he received cash-in-hand payments from his employer at the time of the deadly shooting in April 2019.

The guard, who has asked to be referred to by his family name of El Houli, is still haunted by the chaotic moments after the shooting when underworld scion Jacob Elliott fired indiscriminately at the nightclub from a stolen Porsche SUV. 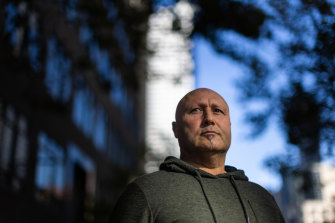 Security guard El Houli, who did not want his first name used, was working at the Love Machine nightclub in Prahran when two people were killed in a drive-by shooting. Credit:Jason South

El Houli has been unable to return to work, after being diagnosed with post-traumatic stress disorder, depression and anxiety. He has now launched civil action against AFIS Security Pty Ltd, which was employed by Love Machine to provide guards for the venue.

The 53-year-old says his psychological injuries were sustained during his employment at Love Machine and that the security company is liable for lost income, medical expenses and damages, according to court documents.

“I was standing at the door, letting people out, so I was facing the club when I heard four shots fired which I thought might have been firecrackers.”

El Houli said he turned and saw the Porsche driving off and several people on the ground.

Fellow security guard Aaron Khalid Osmani was directly behind him and patron Richard Arow about a metre to his left.

Both men had been shot in the head and would later die in hospital. Another patron, who El Houli had been speaking with moments earlier, had been wounded in the arm and was writhing in pain.

“I feel they saved my life. I feel guilty and incredibly sad. I try to be strong, but I find it very hard to talk about. I keep thinking ‘why did these guys get shot, and I’m still alive?’” 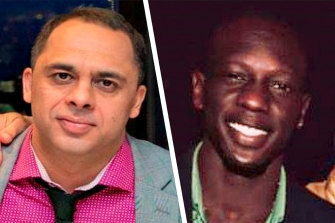 “I still remember the moaning and groaning and screaming … I still can’t stop myself crying when I talk to my psychologist about it,” he said.

“We are astonished that WorkCover has refused to accept our client’s claim given that he was clearly working on the door that night and witnessed the shooting,” Karantzis said.

Elliott, 21, was last week found guilty by a Supreme Court jury of murdering Osmani and Arow and wounding another guard and two patrons outside the club.

The son of slain crime boss Nabil Maghnie, Elliott was found guilty of two charges of murder, two counts of attempted murder and one of intentionally causing serious injury.

His accomplice Allan Fares, 24, was behind the wheel of the stolen Porsche. He was also found guilty of the same charges after prosecutors successfully argued he drove at a slow pace just metres away from people when Elliott fired the shots.

A third man, Moussa Hamka, 28, was found guilty of one charge of assisting an offender over an attempt to conceal the others’ involvement in the shooting.

The trio were remanded in custody and will face a pre-sentence hearing in August.

Cut through the noise of the federal election campaign with news, views and expert analysis from Jacqueline Maley. Sign up to our Australia Votes 2022 newsletter here.