SNP supporter is left red-faced when she demands to know why HMS Queen Elizabeth is allowed to visit Scotland – only to be told it is the aircraft carrier, not the monarch

An SNP supporter has been left red-faced after confusing aircraft carrier HMS Queen Elizabeth with the Queen herself.

After Police Scotland warned people about restrictions in place while the HMS Queen Elizabeth was in the area, Kerry Newton took to Twitter to question why the Queen was allowed into Scotland given current coronavirus lockdown restrictions. 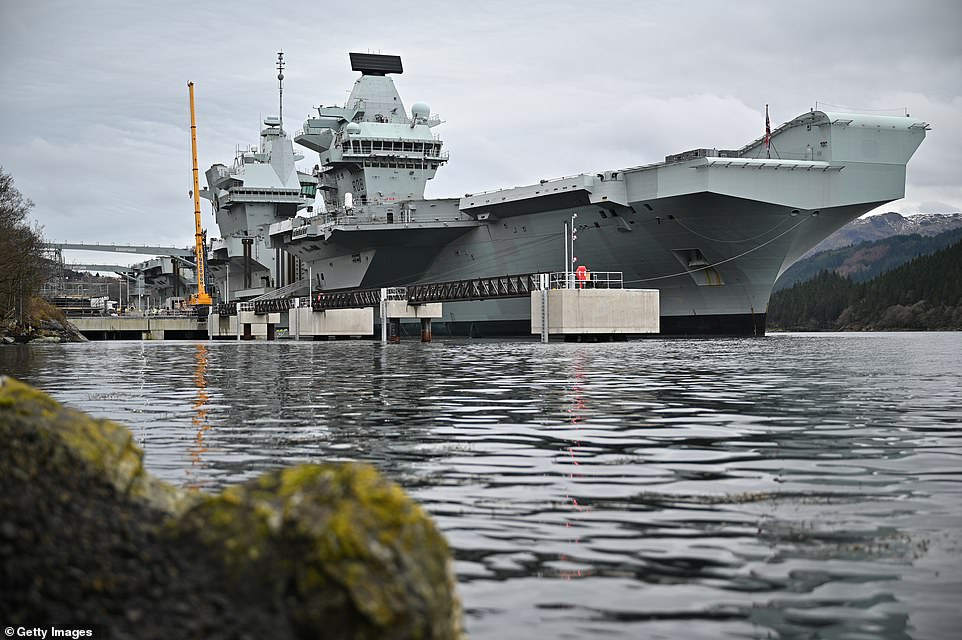 The HMS Queen Elizabeth, an aircraft carrier, was mistaken for the Queen by a confused Twitter user after Police Scotland warned people in the community of Glenmallan that there were restrictions in place while the ship was in the area 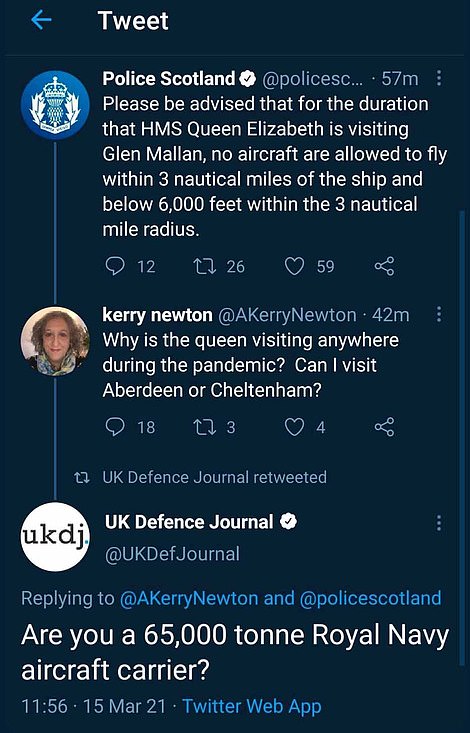 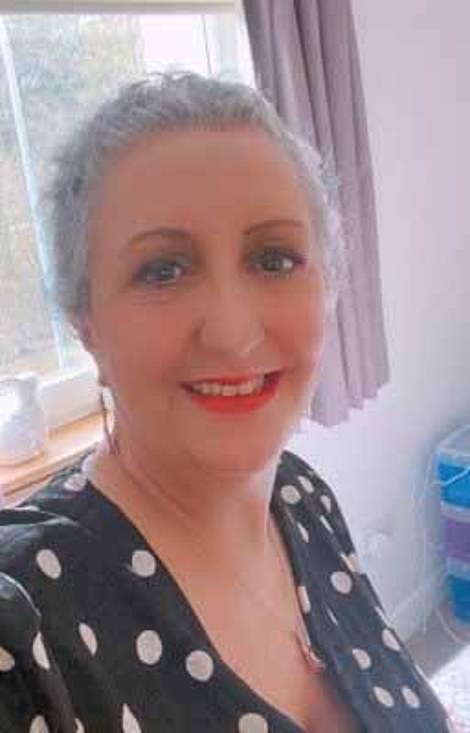 Not content with the news, Kerry responded: ‘Why is the Queen visiting anywhere during the pandemic?

‘Can I visit Aberdeen or Cheltenham?’

Kerry, who says she is applying for Scottish citizenship in her Twitter bio, was not alone in the mistake with a handful others also asking why the Queen was allowed to break lockdown restrictions.

Although the tweet has since been deleted, many were quick to pick up on Kerry’s mistake, with the UK defence journal official account asking: ‘Are you a 65,000 tonne Royal Navy aircraft carrier?’

Another Twitter user pointed out: ‘HMS means Her Majesty’s Ship. As a military vessel it can go where it likes during Lockdown. The only constraints are that the water is deep enough.’ 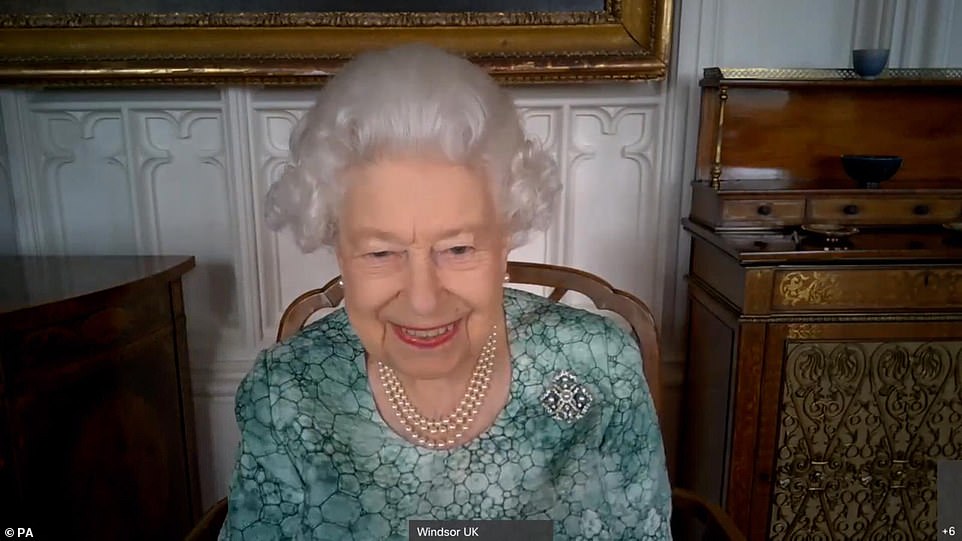 The fleet flagship arrived at the new Northern Ammunition Jetty at Glen Mallan, in Loch Long, on Monday as part of final preparations before her first operational deployment.

The £3 billion vessel, which was assembled at Rosyth in Fife, has spent the last two weeks at sea testing and trialling her latest equipment.

HMS Queen Elizabeth is the first of the Royal Navy’s fleet to visit the new £64 million facility, built at Glen Mallan by the Defence Infrastructure Organisation (DIO).

Captain Angus Essenhigh, HMS Queen Elizabeth Commanding Officer, said: ‘We are very proud of the close connection our ship has with Scotland, especially with our affiliated city of Edinburgh. 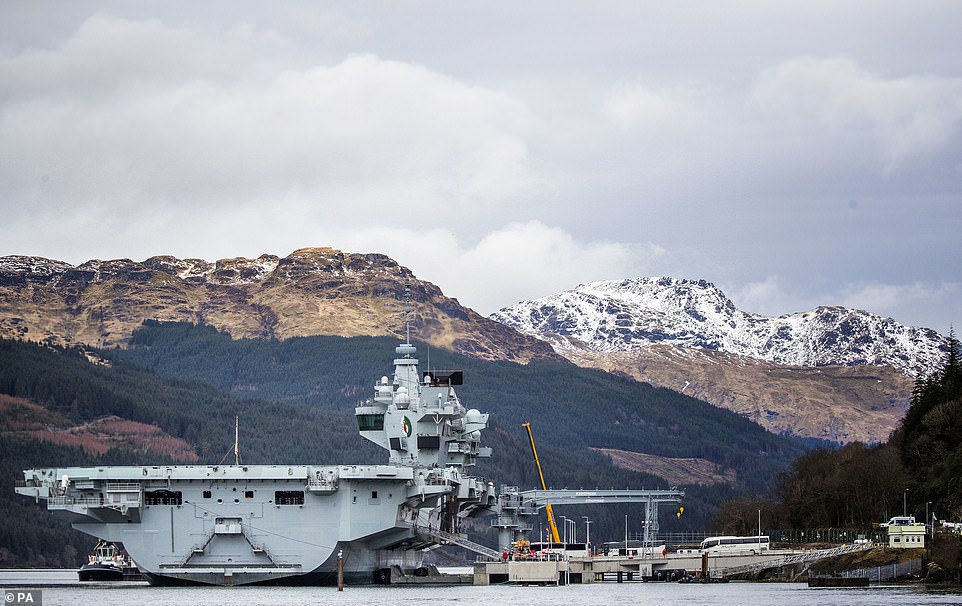 The £3 bn vessel, which was assembled at Rosyth in Fife, has spent the last two weeks at sea testing and trialling equipment

‘HMS Queen Elizabeth embodies the best of British engineering and craftsmanship, including Scottish shipbuilding, and it is a privilege to return to her birthplace of Scotland.’

This is the first time HMS Queen Elizabeth has visited western Scotland, after she became a familiar sight in the Firth of Forth where she was assembled.

She berthed at the jetty for a routine loading of operational stores.

HMS Queen Elizabeth is due to sail for Portsmouth at the end of the month, and will deploy to the Mediterranean, Indian Ocean and East Asia later this year, as part of the UK’s Carrier Strike Group.

The 65,000 tonne carrier is capable of carrying up to 40 aircraft and is primarily used to launch F35 strike aircraft. 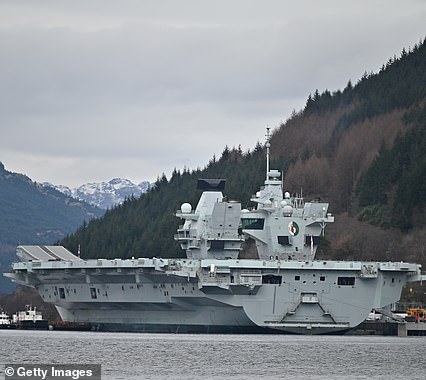 Base of operations: Portsmouth

Can carry up to 40 F35 fighter planes 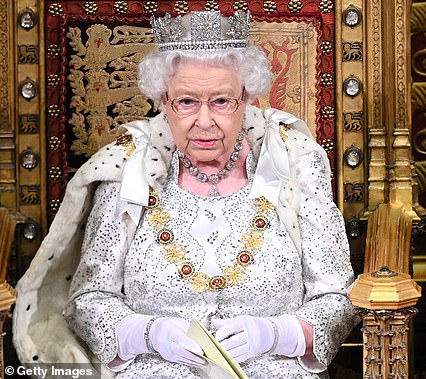 Base of operations: Windsor