Woman, 45, who helped her serial crook boyfriend, 38, escape from court and spend a day on the run said she only opened the door of the dock to ‘let him out for a kiss’

A woman who helped her serial crook boyfriend escape from court and spend a day on the run said she only opened the door of the dock to ‘let him out for a kiss’.

Lee O’Neill decided to make a run for it when told he faced prison yet again for breaching a community order.

The 38-year-old repeatedly asked if he could go to the toilet, before begging an usher to let his partner come into court.

But when Helen Robinson, 45, walked in, O’Neill asked her to open the dock door, which she did, and the couple fled.

The usher shouted ‘no’ before the career criminal pushed past him, causing him to stumble and nearly fall to the floor, the Liverpool Echo reported.

Robinson asked if her boyfriend had been sent down, and when told that he had, shouted back: ‘I’m glad I let him out.’ 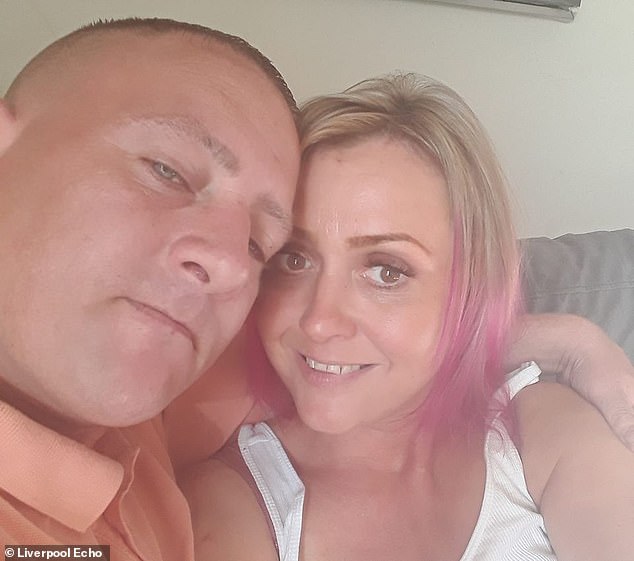 The pair fled Warrington Magistrates’ Court at around 11.30am on August 13 this year and spent just over a day at large.

Police found them hiding at another woman’s house in Warrington – which O’Neill was banned from – at 8.20pm on August 14.

A standoff ensued for 20 minutes, when O’Neill and the two women refused to open the door or comply with officers’ instructions.

O’Neill was jailed for 10 months after he admitted escape from lawful custody, common assault and breaching a restraining order.

The crook, of Folly Lane in Bewsey, Warrington, has 39 previous convictions for 101 offences, including an attack on a pensioner.

Robinson, of Ripley Street, Warrington, denied aiding and abetting her boyfriend’s escape and was set to stand trial next May.

She sobbed and moaned when she appeared in the dock at Liverpool Crown Court, having changed her plea to guilty.

Frances Willmott, prosecuting, said O’Neill was alone in the dock after magistrates had risen to consider their sentence.

Robinson admitted the offence, but only on the basis she didn’t know he would escape when she opened the door.

Judge Thomas Teague, QC, questioned whether this was in fact a denial of the offence.

Gerald Baxter, defending, said O’Neill asked her for a kiss and when she opened the door, that in itself was an escape, but she didn’t know he would run out of the building.

He said she was ‘very much under the influence of O’Neill and your honour will have seen the history of domestic abuse and so on’. 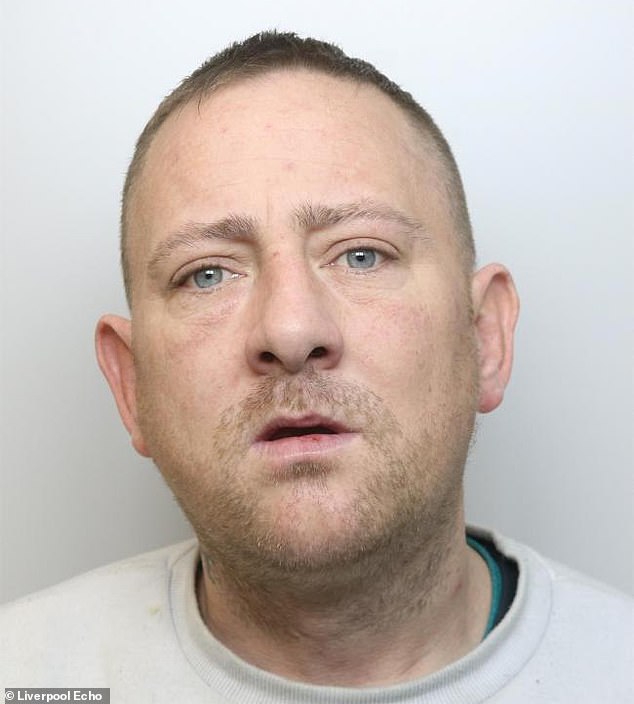 The 38-year-old O’Neill repeatedly asked if he could go to the toilet, before begging an usher to let his partner come into court. But when Helen Robinson, 45, walked in, O’Neill asked her to open the dock door, which she did, and the couple fled

The court heard Robinson hadn’t intended to go to the court and had only been informed of O’Neill’s hearing by a friend.

Mr Baxter said she was outside of the building in a park when the usher called her into the court, at O’Neill’s request.

He said because of the nature of the couple’s relationship, Robinson was ‘almost certain’ to comply with what he asked.

Judge Teague accepted a reworded basis of plea, stating that Robinson knew O’Neill would escape the dock, but not the court.

Mr Baxter said Robinson – who continuously interrupted him throughout the hearing – had a ‘bad record’ and ‘her fair share of troubles in life, but started off with a great deal of promise’.

Mr Baxter said she gained qualifications but went ‘downhill’ thanks to alcohol and drugs, which led to social services intervening in respect of her children.

He said she was now engaging well with the Probation Service on a rehabilitation course, under the requirements of a past community order, and was said to be motivated to change, having made improvements in the absence of O’Neill. 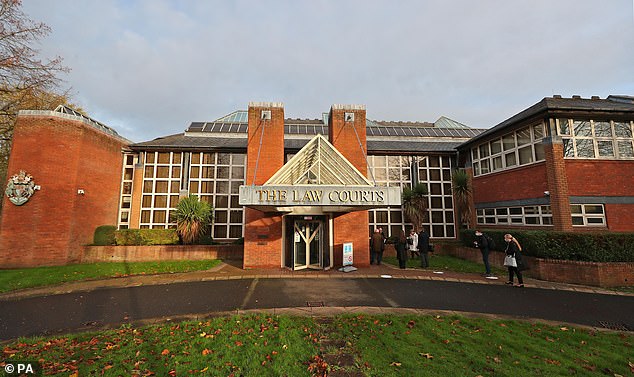 Warrington Magistrates’ Court, Cheshire, where O’Neill escaped from the dock after learning he could face more time behind bars

The lawyer said she had been in custody since September 26 due to a breach of bail, meaning she had served two months – the equivalent of a four-month jail term – on remand.

Judge Teague told Robinson: ‘You must have been under O’Neill’s thumb at the time.

‘He took advantage of the opportunity to flee the building and the pair of you took off.’

He added: ‘I say “sadly” because it could have been so different – you are a woman with a lot of potential.’

Judge Teague said reading a pre-sentence report, ‘it’s clear there has been some recent improvement in your response – no doubt because you’ve been separated from the influence of Mr O’Neill’.

He said Robinson’s culpability was significantly less than O’Neill’s and sentenced her to three months in prison, adding: ‘By my calculations, that should mean you are released immediately.’