Orange skies seen across Britain on Friday were caused by wildfires currently burning 5,000 miles away on the West Coast of America.

Britons awoke to unusually orange skies on Friday, which meteorologists have confirmed were a result of the wildfires that have ripped across California, Oregon and Washington states.

The fires – which have burned through 470,000 acres of dry vegetation – have created large dust plumes, that have now travelled across the North Atlantic ocean.

‘Noticed a bit of a orange glow this morning?’ weather forecasters MetDesk tweeted on Friday.

‘There is some evidence on trajectory models from NOAA [National Oceanic and Atmospheric Administration] for traces of smoke originating from the U.S wildfires causing more of an orange tint to the cirrus clouds here in the UK this morning.’

Later on Friday, he added that there was more crossing the Atlantic at 12 UTC. 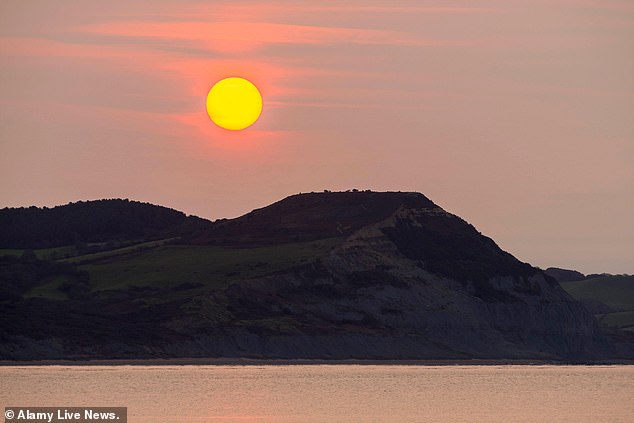 An orange sky is seen in Lyme Regis, Dorset, on Friday. Meteorologists have confirmed that the colour was due to the wildfires currently raging on the West Coast of the US, 5,000 miles away 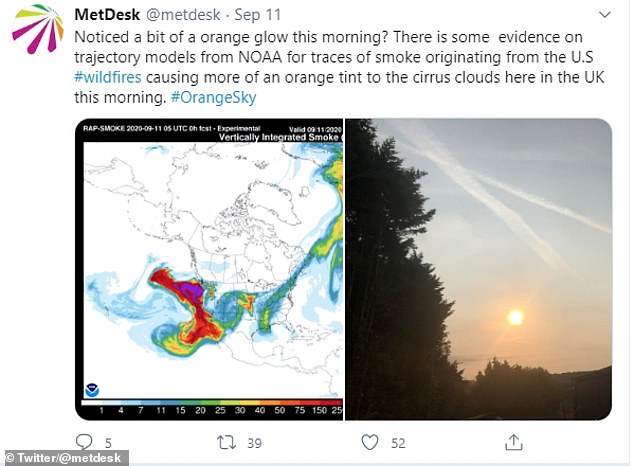 MetDesk tweeted to confirm the cause of the orange skies, showing a map of the trajectory of the smoke from the fires going across the Atlantic Ocean

Hugo Ricketts, an atmospheric physicist, tweeted: ‘There was definitely a slight red tint to the sun over Manchester,’ while meteorologist Paul Knightley said that at midday there was ‘still a rather hazy look to the sky’.

One Twitter user noted that he thought he even smelt ‘burning pine’ on his way to work in the morning, but Simon Lee, a meteorologist at the University of Reading, said this was unlikely, according to The Telegraph.

‘Meteorologically speaking, in the last few days we have seen a very strong and straight, west-east, jet stream, flowing across the North Atlantic from North America to Europe, which has undoubtedly helped rapidly and coherently transport the aerosols from North America.’

He added it was ‘not too unusual for large dust plumes to travel huge distances – for example, Saharan dust often arrives at the US southeast’. 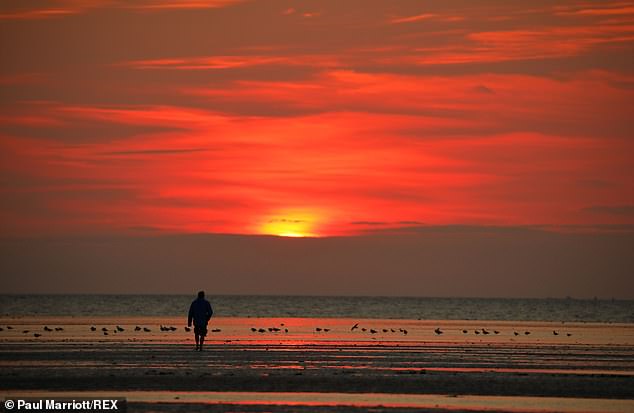 A person walks towards the setting sun, at low tide on a beautiful end to the day at Heacham, Norfolk on Friday. The fires – which have burned through 470,000 acres of dry vegetation – have created large dust plumes, which have now travelled across the North Atlantic ocean

John Griffiths, meteorologist at the Met Office, said the orange glow would have been more obvious at sunrise and sunset because of the angle of the sun.

He also said that Britons may have seen an Orange moon, noting ‘the light coming through from the moon isn’t as strong as the sun, so it’s more likely to get filtered by anything in the atmosphere.’

Due to rising temperatures, however, Griffiths said that further orange skies in the UK would be less likely, with temperatures expected to reach 87 F (31 C).

Oregon’s emergency management director, Andrew Phelps, said officials are ‘preparing for a mass fatality event’ and that thousands of structures have been destroyed. 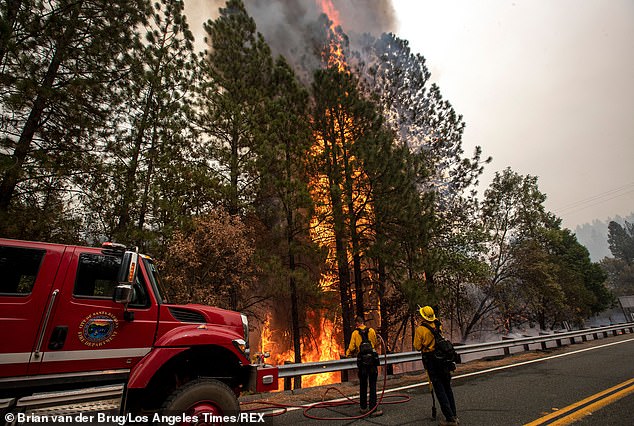 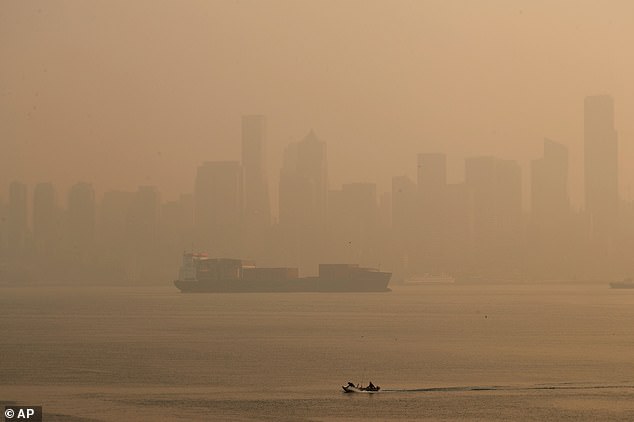 Boaters pass by the Seattle skyline during hazy air conditions on Friday morning as smoke pollution from wildfires raging in California and across the Pacific Northwest worsened in San Francisco, Seattle, and Portland, Oregon 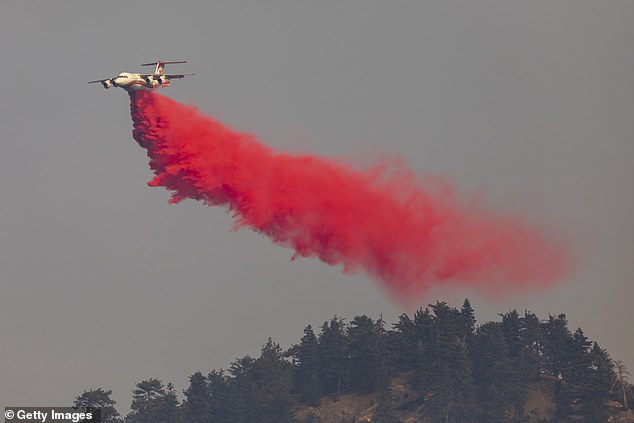 Governor Kate Brown said more than 40,000 Oregonians have been evacuated and about 500,000 are in different levels of evacuation zones, either having been told to leave or to prepare to do so.

Also Friday, authorities announced that a man had been arrested on two counts of arson for allegedly starting a fire in southern Oregon on Tuesday.

The Oregon Convention Center in Portland was among the buildings being transformed into shelters for evacuees.

Portland, shrouded in smoke from the fires, on Friday had the worst air quality of the world’s major cities, according to IQAir.

In California, one of the 28 major fires ravaging the state has officially become the largest blaze in the its history.

The August Complex, which started as more than 30 separate fires in the Mendocino National Forest on August 17, has since burned more than 471,000 acres in and around Tehama County – surpassing the 2018 Mendocino Complex fire.

The complex- which is just 24 percent contained – has destroyed more than 26 structures and killed at least one person. It secured the title of California’s largest-ever fire on Thursday, as the state weathers its worst most destructive year on record. 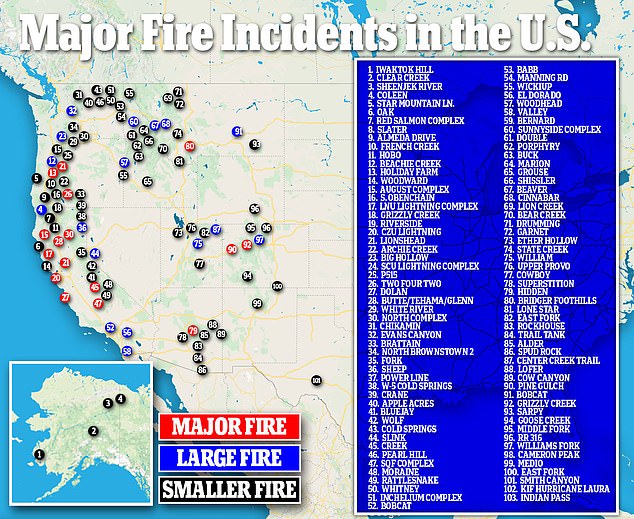 The map above shows 103 fires that have already burned more than 3.4 million acres across the western United States