Home » World News » Who ARE the 'green fanatics' in Lord Frost's sights?

Who ARE the ‘green fanatics’ in Lord Frost’s sights? Speculation ex-Brexit minister’s call for No 10’s ‘pro-woke crowd’ to be sacked was thinly-veiled dig at influence of Carrie and eco-chum Zac Goldsmith

Former Cabinet minister Lord Frost has urged Boris Johnson to axe ‘all the neo-socialists, green fanatics and pro-woke crowd’ in Downing Street to reset his premiership after the Partygate scandal.

The already weakened PM is now on his knees as both the Cabinet Office and the Met Police investigate numerous lockdown gatherings at No10, prompting some senior figures to call for dramatic action to save his government.

Lord Frost, the former Brexit minister, tweeted that ‘whatever conclusions about the leadership Tory MPs may draw from the Gray report and whatever follows, the crucial thing is significant change in policies and in systems & people around the PM’.

Referencing a column written by The Telegraph’s Allister Heath, the peer said: ‘In systems & people – so the levers of government work, and, as Allister says, ‘with all the neo-socialists, green fanatics and pro-woke crowd exiting immediately’.’

His comments yesterday are likely to be seen by some as a jab at Mr Johnson’s wife, Carrie, a passionate environmentalist and animal lover who has been credited with influencing her husband’s often controversial policies in these areas.

But who else could he be referring to? Below, MailOnline runs through the possible candidates.

Given its timing, Lord Frost’s tweet has been widely interpreted as referring, at least in part, to the PM’s wife, Carrie.

The 33-year-old was back in the headlines this week over claims she lobbied her husband to organise an airlift to rescue animal charity boss Pen Farthing and his menagerie of 200 pets from Kabul Airport. The flight generated intense controversy at a time when desperate Afghan translators were struggling to get out.

The PM has described claims he personally intervened to help organise the flight as ‘total rhubarb’ – only to be immediately accused of lying when emails emerged suggesting he did. 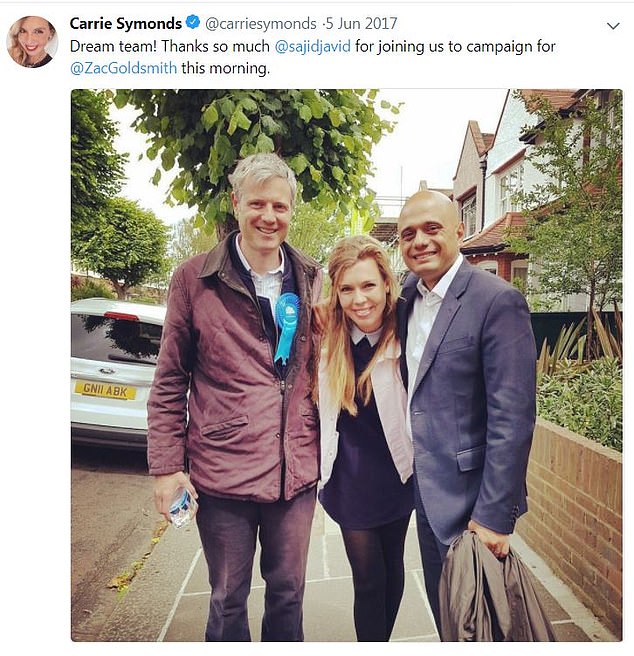 Carrie Johnson with her friend Zac Goldsmith, who have been accused of lobbying Boris Johnson to organise an airlift to rescue animal charity boss Pen Farthing and his menagerie of 200 pets from Kabul Airport. Pictured with them is Health Secretary Sajid Javid

Last year, a Nowzad volunteer claimed to LBC that he had approached her directly for help.

Meanwhile, members of Lord Goldsmith’s private office exchanged several emails about the airlift, including on August 25 in which an aide said ‘the PM has just authorised their staff and animals to be evacuated’.

Mrs Johnson is understood to deny speaking to anyone from Nowzad about a rescue, or lobbying the PM or any minister about it.

Meanwhile, Lord Goldsmith last night insisted he did not discuss rescue efforts with Mr Johnson and appeared to try to apportion blame to senior officials from his team.

While Lord Frost has publicly expressed his scepticism of environmental campaigns such as the drive to net zero, the PM’s wife is a passionate environmentalist, with some seeing her fingerprints on her husband’s desire for a so-called ‘green recovery’ after Covid.

Mrs Johnson currently serves as head of communications at the Aspinall Foundation, an animal charity. 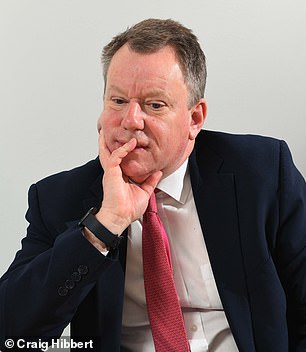 Lord Frost, the former Brexit minister, has called for a purge of ‘woke’ figures from the government

Her influence was noted by many in last year’s Queen’s Speech, which covered a raft of topics close to her heart, including a law to recognise animals’ feelings and tough climate targets.

The Animal Sentience Bill laid out that creatures ‘with a backbone’ can feel happiness and suffer.

Other proposals included banning the keeping of primates as a pet, increasing welfare protections for pets, at zoos and on farms, and cracking down on ‘puppy smuggling’.

Lord Frost is said to have personally opposed the appointment of two of Mrs Johnson’s political allies – Baroness Finn as deputy chief of staff and Henry Newman as her assistant.

Mrs Johnson was believed to have played a major role in helping to force out Dominic Cummings and No10 communications chief Lee Cain last November, while in November 2020 it was reported that the PM made the decision to appoint Allegra Stratton as his new press secretary because otherwise ‘Carrie will go effing crackers’.

Despite numerous reports to the contrary, No10 has previously denied Mrs Johnson has sought to influence government policy or appointments, calling her a ‘private individual’. 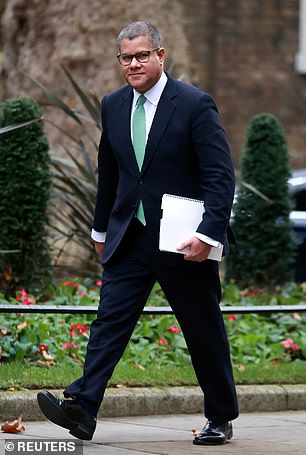 Lord Frost’s concerns over the ‘staggering cost’ of the government’s net zero agenda have been widely reported, and this was believed to be a major factor in his resignation last month.

Mr Sharma, who served as the UK’s president at the COP26 climate conference in Glasgow, has been one the government’s foremost cheerleaders for the policy and Mr Johnson’s wider environmental agenda.

In November, he appeared visibly emotional while telling of his regret at how the summit negotiations concluded with last-minute changes on the wording about coal.

Addressing delegates, he said: ‘May I just say to all delegates I apologise for the way this process has unfolded and I am deeply sorry.’

In an interview in December, he reaffirmed the government’s commitment to the net zero agenda, presenting it as one of its key priorities.

‘What people will judge us on, as they will also judge other governments on, is delivery [on climate goals],’ he told the Guardian. ‘The key issue is to show that countries are delivering on [their Cop26] commitments and they are not wavering.

Grant Shapps: Target for half of urban journeys to be walking or cycling by 2030 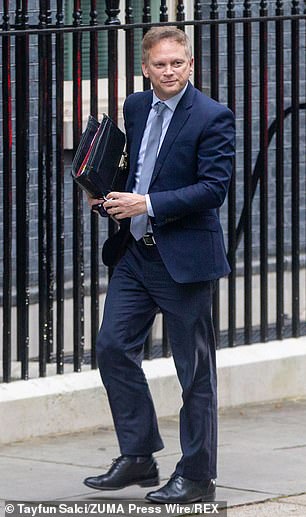 Himself a regular cyclist, Mr Shapps has revealed his ambition to drive a green transport revolution that will see half of all urban trips be walking or cycling by 2030.

Last year, he boasted the government was ‘going further and faster than ever to tackle climate change’, and claimed Britain was ‘leading the world on the switch to electric vehicles’.

He said environmental initiatives would ‘create sustainable economic growth, boost job opportunities and clean up the air in our towns and cities’.

And this week, he told liberal conservative think-tank Bright Blue that it was wrong to blame higher prices on green levies and the drive towards decarbonisation.

‘We need to combat the idea that it costs you money to go green – it doesn’t need to, and in fact, it can actually be good value for money as well,’ he said.

‘There’s a lot of pressure at the moment on energy bills and we know they’re very high.

‘When you shift your tariffs to a zero-carbon tariff, you might think it is going to cost you more. In fact, it’s very easy to find some of the best and cheapest tariffs on the market which happen to be the ones that come from renewables and nuclear, not from fossil fuels.’ 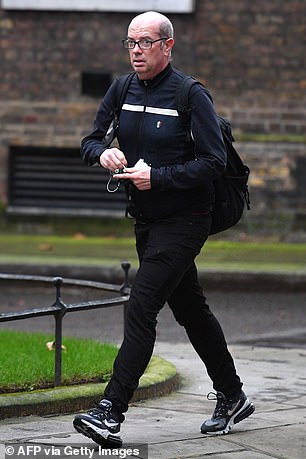 A long-time friend of Mr Johnson, Mr Gilligan has served as the PM’s transport adviser since July 2019 as part of Downing Street’s policy unit.

The former BBC journalist, who in 2003 claimed on the Today programme that the Blair Government had ‘sexed up’ a report to exaggerate Saddam Hussein’s ‘weapons of mass destruction’, is widely viewed as one of the PM’s most influential advisers.

His links with Mr Johnson go back a long way, with the PM having once offered him a job at The Spectator when he was the editor. Mr Johnson appointed Mr Gilligan to be his Cycling Commissioner in 2013 when he was the mayor of London.

He helped to oversee a cycling revolution in London, including the installation of large cycle superhighways and other infrastructure that motorists say causes congestion by taking up too much road space.

The government has further infuriated drivers in recent years through its backing of Low Traffic Neighbourhood schemes, which see cars blocked from certain areas in an effort to improve their air quality.

Senior Tory London Assembly member Andrew Boff has laid much of the blame on Mr Gilligan himself.

‘Gilligan’s the problem,’ he told a meeting attended by local website On London last year. ‘The problem is Gilligan… If you look at all of the issues we have with these transport schemes, the common thread is Gilligan.’