Home » World News » What is a nuclear submarine and why would you want one?

A fast guide to the fast (and stealthy) new subs on the horizon for Australia.

Dominating the seas has been the ambition of countries for centuries and in the modern age (beyond the sails and masts) the nuclear submarine has emerged as a leading choice for distance, speed and stealth. Countries such as the United States, China, the United Kingdom, France, Russia and India already have nuclear fleets. Now the Prime Minister has billed a new plan for Australia to build its own nuclear-powered submarines using US technology as a game-changer. It’s part of a historic new security pact called AUKUS (pronounced AWK-us) between Australia, the US and the UK to step up their response to Chinese aggression in the region.

But it also means Australia has scrapped a $90-billion program to build 12 French-designed diesel-powered subs – and that will cost taxpayers billions in compensation to the company that had already started work on those models. (Not to mention seriously angering the French government.)

So, how do nuclear subs work and why do we need them? 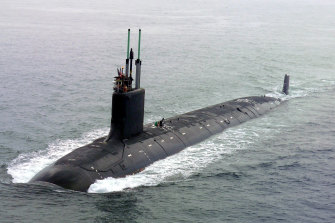 The new submarines based on US tech will not be in operation for years.Credit:General Dynamics

What are nuclear submarines?

When scientists split the atom, they quickly realised it could do more than build bombs. It could be used to generate electricity. These nuclear reactors have been powering homes and industry across the world for the past 70 years. Nuclear submarines work in a similar way – they each have their own miniature nuclear reactor on board, using highly enriched uranium as fuel.

A conventional submarine, meanwhile, uses diesel generators to charge batteries, which then use the electricity stored in them to run a motor. As with any battery, though, they go flat. To recharge, they need to surface and do a thing called “snorkelling” – bringing in air to run their generators. Snorkelling makes them vulnerable: they can be spotted from the sky or by submarine-hunting ships.

“If you think of Indiana Jones hitching a ride on the back of a submarine at the surface, most of the time subs really are up at the top like that,” says nuclear physicist Professor Andrew Stuchbery at the ANU. “But a nuclear sub can sink below the waves and not come up for months and months. They come up, generally, to refresh the crew.”

They can also go faster, hitting say, 60 kilometres an hour, says Hellyer, whereas a conventional sub can be outrun by a ship; its commander could pull the sub into a sprint, but at only about 30 km/hr Hellyer says it has to always be mindful of preserving battery power. “The current generation of US attack submarines is, like, over 8000 tonnes … so they’re moving this massive body through the water at 60km/hr.”

At a glance: How many subs does Australia, the UK, US, China have?

With fewer moving parts than a diesel model, nuclear submarines are also famously quiet,perfect for stealth missions behind enemy lines. The technology has become so silent that in 2009 British and French nuclear subs, carrying ballistic missiles, accidentally ran into each other in the Atlantic Ocean.

Still, as Stuchbery explains, nuclear subs also cannot be switched off the way diesel and electric models can, water must always be flowing through to keep the reactor cool. That means, although they’re not dependent on air, they do discharge used hot water that can be detected as it rises to the surface using good thermal imaging, UNSW defence technology expert Dr Jai Galliott says. (And in battery mode with their generators off, diesel is still quieter).

While the new fleet will allow Australia to patrol more of the Indo-Pacific region for longer periods, some experts say that traditional diesel models are more nimble. Nuclear subs tend to be larger and so harder to navigate through the nooks and crannies near the coast, says Galliot – less useful for defending our shores in combat.

The nuclear reactors powering a sub are actually very small, just a metre across, says Stuchbery, who recalls stepping aboard the world’s first nuclear sub, the USS Nautilus, after it was retired. Nuclear subs still tend to be larger than other models because they need more anti-radiation layers built in, more distance between the crew and the reactor. “And because they can go further and people are staying on them longer, so we make them bigger to keep more people happy and healthy under the sea.”

Galliott, who was formerly in the Australian Navy, thinks that the new nuclear fleet will be a step up from the diesel ones we originally ordered from France. “But this is long overdue for Australia.”

Does it mean they carry nuclear weapons?

No. Weapons are one thing, nuclear power is quite another. The countries that already have nuclear-powered submarines – the US, China, UK, France, Russia and India – all have nukes and sometimes carry warheads on board their fleets. But, while the US-designed subs will come equipped with missile launch tubes, Australia is not one of the 11 nations worldwide to hold nuclear weapons and Scott Morrison has stressed this new submarine deal won’t change that.

Nuclear-powered submarines, as with nuclear weapons, use enriched uranium to work but they will not violate our treaty against nuclear weapons because we are not enriching it ourselves.

Still, given Australia will be in the rare position of running nuclear subs without nuclear weapons, and now under an even louder banner of alliance with the US and the UK, Galliott worries our subs could become easy targets in the event of attack. If war were to break out, “our ships [could] be among the first targets,” he says. “Interrupting our relationship with America and the UK will be a top priority.”

Acquiring the nuclear subs meanwhile will send a very strong message to China, “inevitably aggravating them, but leave us completely beholden to the US and UK”, he says.

Just hours after news of the Australian subs deal broke, Chinese government spokesman Zhao Lijian slammed the plan as intensifying the arms race in the Indo-Pacific. “The US, UK and Australia are engaging in cooperation in nuclear-powered submarines that gravely undermines regional peace and stability, aggravates the arms race and hurts the international non-proliferation efforts,” he said.

While Galliott says Russian nuclear submarines have had their fair share of troubles, there hasn’t been a serious accident involving a US sub. When things go wrong, Stuchbery adds, they tend to be for the reasons any submarine can run into trouble – water depth and pressure or equipment malfunctions. The nuclear risk is well understood and closely managed, he says.

As for handling the radioactive waste that comes out of this fleet, Galliott notes it won’t be a problem for some 30 years. “Australia will likely end up sending waste to the US or UK for disposal via their programs, but we could well build our own waste storage facility. Our geography and desolate central locations are ideal for it.”

Stuchbery agrees, but notes militaries often have different regulatory requirements for nuclear waste than privately owned power stations around the world. “It will be interesting to see how it’s handled.”

Some experts are concerned this move could signal a deeper push into nuclear power for Australia. But Professor Mahananda Dasgupta says it’s time the question of a nuclear industry (and waste disposal) in Australia had more focus. She works with Stuchbery at the ANU’s Heavy Ion Accelerator, which can detect even the finest traces of the radioactive isotopes used in nuclear reactors. “It’s so sensitive, if it was searching an MCG filled with salt, it’d find the two grains of sugar,” she says. “We know how to monitor for radiation from these kinds of reactors, just testing ocean water is enough.”

Is the new alliance all about submarines?

No, there’s a lot more to it. The historic “trilateral security partnership” will also involve co-operation on missile capabilities, cyber, artificial intelligence, quantum development and industrial supply chains. “That broader aspect has sort of gotten overlooked a little in all of the excitement about nuclear submarines,” says Hellyer.

With the new submarines not expected to be up and running until at least 2036, “I suspect we’ll be able to do a lot of really interesting things with the US on cyber and artificial intelligence,” he says, “and all the different applications of emerging quantum technology, well before you ever see one of those future submarines.”