An actress has accused the Metropolitan Police of ‘ghosting her’ after officers failed to track down a suspect who harassed her as she walked home alone.

Corrine Priest, who starred in Les Misérables in the West End, claims she was followed and harassed by a man after she complained about people not wearing face masks on the Tube.

Video footage shows the man calling her a ‘posh c***’ and a ‘sl**’ as she walked home from Hendon Tube Station in London last November.

Ms Priest says she gave officers the suspect’s name and telephone number, and footage of his appearance on a television dating show.

But four months on from the incident, she says Scotland Yard ignored her and fail to ‘take this kind of thing seriously.’

Her comments come amid fury over the force’s handling of a vigil held on Saturday evening for Sarah Everard on Clapham Common. 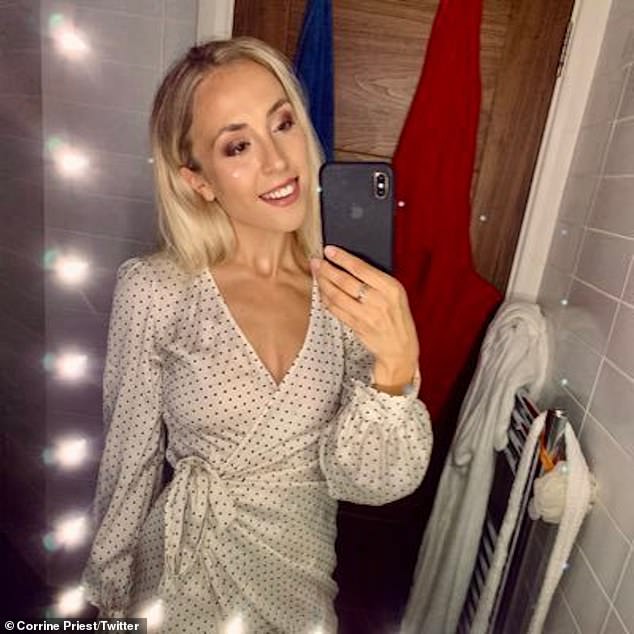 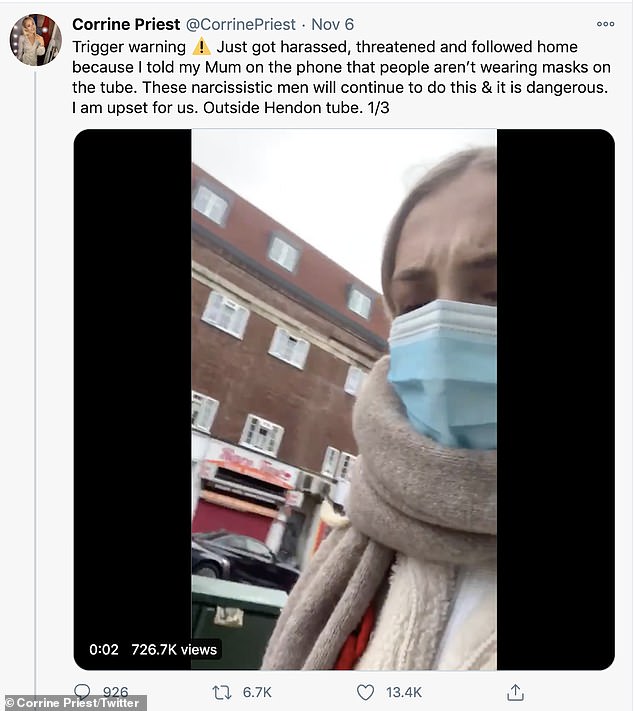 A shaken Corrine posted the videos to Twitter shortly after the altercation, saying: ‘Trigger warning. Just got harassed, threatened and followed home because I told my mum on the phone that people aren’t wearing masks on the tube’ 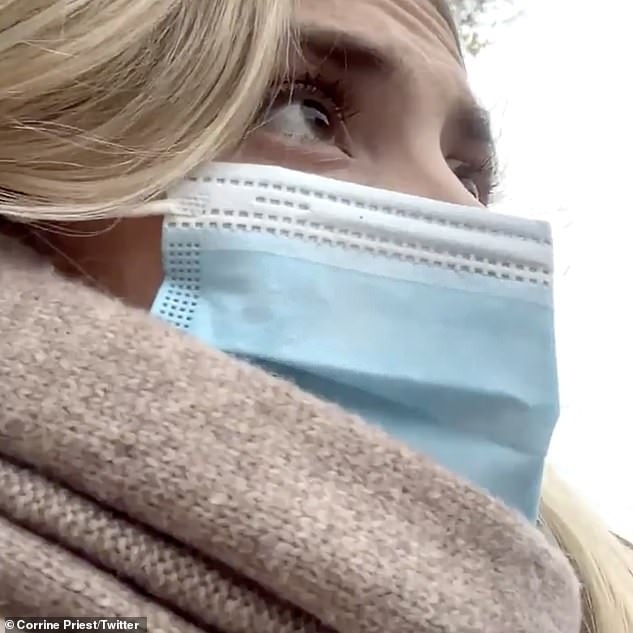 Ms Priest (pictured) says she was called a ‘posh c***’ and a ‘sl**’ by the man as she walked home from Hendon Tube Station in London, and filmed the incident

The exchange apparently began after the man overheard Ms Priest on the phone to her mother talking about people not wearing face coverings on the Tube.

Ms Priest told The Telegraph: ‘What can women do if the police won’t stand up for us?

‘I honestly did everything I could but the Metropolitan Police just don’t seem to take this kind of thing seriously.’

As the video begins, Ms Priest is seen filming herself as she is pursued by the man, who tells her: ‘You’re a dirty little f****** life.’

Speaking to the camera, she says: ‘Someone is filming me, he is following me. I don’t know what to do.’

But the man shouts: ‘Apologise now’, as Ms Priest replies that she is sorry.

Still following her, he continues: ‘You said some guy wearing a mask, did you say it or not? You didn’t directly do it to me no?’

Ms Priest retorts: ‘No I did not, not to you, no I promise I don’t want any trouble.’

The man says: ‘I ain’t threatening you yeah, but I’ve got people yeah if you want to mouth off like some rude girl.’

Ms Priest responds: ‘I was speaking to my mum on the phone, it’s not okay and now you’re following me I’d really appreciate if you don’t because it is quite intimidating.’ 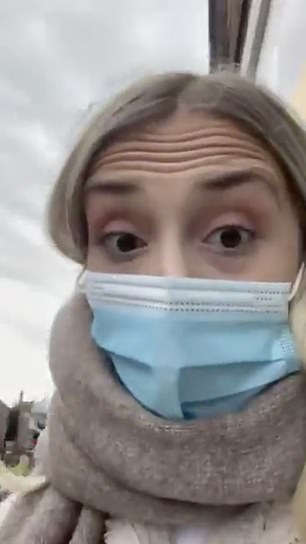 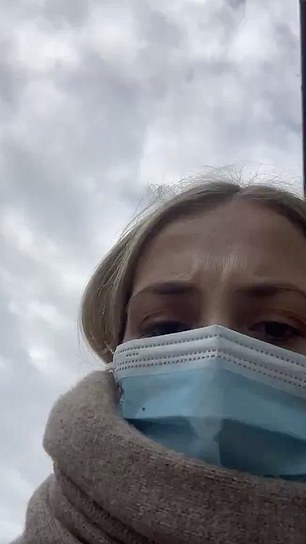 Speaking to the camera, she says: ‘Someone is filming me, he is following me. I don’t know what to do’

Ms Priest, still filming, responds: ‘And you called me a posh sl** and a c*** that’s unacceptable.’

The man responds: ‘Yeah well that’s exactly what you are behaving like.’

The pair continue to have a back and forth on whether Ms Priest’s comments were directed at the man for not wearing a mask, as she repeatedly tells him they were not.

The man tells Ms Priest to apologise for a second time, despite her already doing so.

She responds: ‘But also at the same time don’t come and threaten me to say that you’re going to beat me up and follow me home.’

The man adds: ‘I’ve got two other sisters. I would never touch a girl, but it doesn’t mean I can’t f**** say what’s on my mind. Watch yourself yeah and don’t behave like that.’

The argument continues as Ms Priest retorts: ‘You and your friend coming to beat me up?’ The man responds: ‘We can easily do that right now.’

Ms Priest posted the videos to Twitter shortly after the altercation last November, writing: ‘Trigger warning. Just got harassed, threatened and followed home because I told my mum on the phone that people aren’t wearing masks on the tube.

‘These narcissistic men will continue to do this and it is dangerous. I am upset for us. I hate how scared I was. I had to be submissive for my safety.

‘It is not ok that this s*** happens. It happened because I am a woman and I was alone. He walked away thinking he taught me a lesson and without apologising. He is reported.

‘I feel it’s my responsibility to share. I don’t know, just stay safe everyone, there are some odd people out there.’

A Met Police spokesman said: ‘Police received an online report on 6 November 2020. A woman aged in her 20s reported that she had been harassed and threatened by a man near Hendon tube station at around 13:50hrs that afternoon. There have been no arrests. Enquiries continue.’ 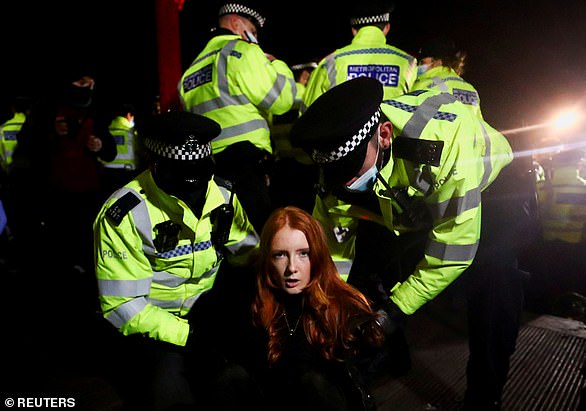 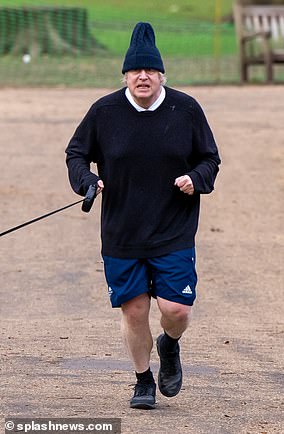 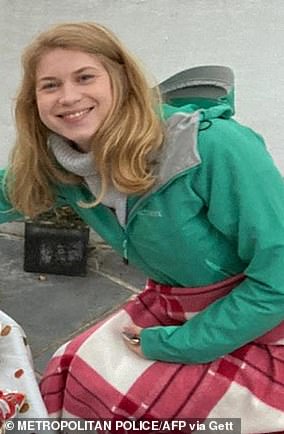 Dame Cressida has said the tragedy makes her ‘utterly determined’ to hold onto her job as the force’s first female leader, and she spoke to Boris Johnson on the phone yesterday, who alongside Home Secretary Priti Patel are believed to support her. The PM is pictured out jogging with his dog, Dilyn today (left). Pictured right is Sarah Everard

The Prime Minister will today chair a meeting of the Government’s Crime and Justice Taskforce following clashes at Saturday night’s vigil for Sarah Everard.

Dame Cressida Dick will be among the attendees.

In ugly scenes on Saturday, officers clashed with crowds gathered on Clapham Common to remember the 33-year-old marketing executive who went missing while walking home from a friend’s flat on March 3.

Mr Johnson said he was ‘deeply concerned’ about the footage from the event, some of which showed police officers grabbing women and leading them away in handcuffs.

He added: ‘I have spoken with the Metropolitan Police Commissioner who has committed to reviewing how this was handled, and the Home Secretary has also commissioned HM Inspectorate of Constabulary to conduct a lessons learned review into the policing of the event.

‘(Today) I will chair a meeting of the Government’s Crime and Justice Taskforce to look at what further action we need to take to protect women and ensure our streets are safe.

‘The death of Sarah Everard must unite us in determination to drive out violence against women and girls and make every part of the criminal justice system work to protect and defend them.’

Shadow home secretary Nick Thomas-Symonds criticised the Government for responding with ‘yet more meetings and another consultation’ at a moment when the country is ‘demanding action to tackle violence against women and girls’. 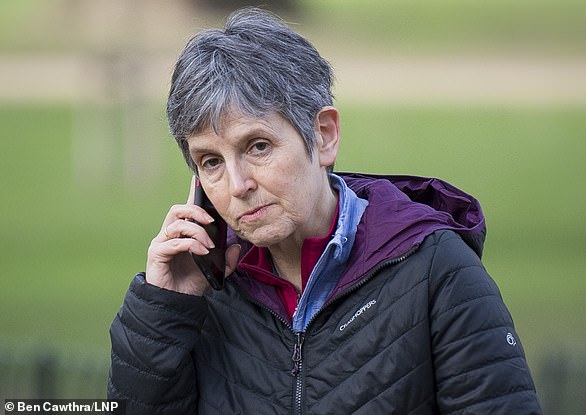 Dame Cressida, 60, (seen walking to New Scotland Yard today) has been fighting for her job after widespread criticism of how her force policed Saturday’s protest

London mayor Sadiq Khan said he would be asking the Inspectorate of Constabulary and the Independent Office for Police Conduct to look into the events.

And Martin Hewitt, chairman of the National Police Chiefs’ Council, said he would bring together police chiefs on Monday to discuss ‘what more we can do to better protect women’.

In a video from Saturday’s vigil, a woman could be seen being shoved forcefully in the back by two officers after being lifted from her knees.

Reclaim These Streets had organised the vigil before being forced to cancel following consultation with the Metropolitan Police, which said it would be in breach of coronavirus rules.

Nimco Ali, who is advising the Government on tackling violence against women and girls, compared the force’s behaviour with an abuser.

She told Times Radio: ‘It does come from a handbook of abusive men, where the fact that you’re constantly blaming the victim for your act of violence. So rather than actually taking accountability, it was more like ‘women shouldn’t have turned up’.’

Three of them, a man and two women, were arrested on suspicion of breaching the Health Protection Regulation and have been reported for consideration of a fixed-penalty notice.

A fourth person, a woman in her teens, was arrested on suspicion of a public order offence and has been released under police investigation.

There were fresh protests on Sunday outside Scotland Yard and at Parliament Square, with police seen standing guard outside Met Police’s headquarters, while other officers stood around a statue of Sir Winston Churchill, after it was vandalised during protests last year. 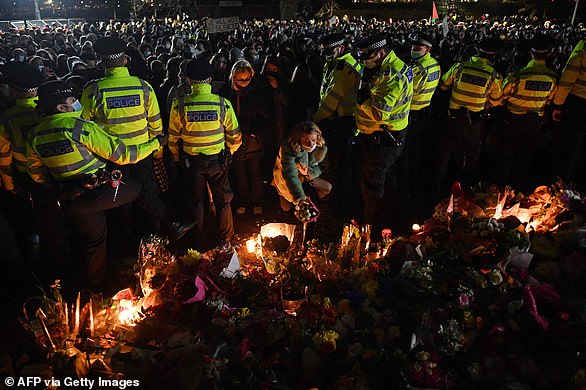 A well-wisher places a tribute to the growing pile from a gap in a police cordon at the bandstand on Clapham Common, south London, on Saturday