Home » World News » Welcome to Denmark, where all COVID restrictions have been ditched

Copenhagen: Welcome to Denmark, where COVID-19 is over – again. On Wednesday AEDT, the Scandinavian nation became the first country in Europe to put an end to all coronavirus-related laws. In the eyes of the Danish government and, crucially, the vast majority of its 5.8 million citizens, the virus is no longer deemed a “critical threat to society”.

Cases remain high – very high – but the Danes have moved on. 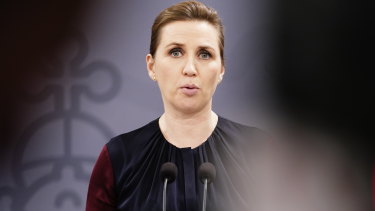 Even if you test positive, there is no longer a legal obligation to self-isolate.

In the capital, Copenhagen, there was an atmosphere of cautious relief as people crammed into the Metro, on to commuter trains and buses, and shops without face masks for the first time since November.

Even the new, more transmissible BA.2 Omicron variant that dominates infections in Denmark could not put people off.

Tyra Grove Krause, director of infection preparedness at the infectious diseases agency SSI, said there was nothing for it but to let the new wave “run through the population”. 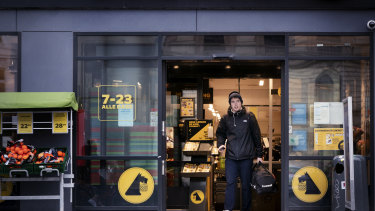 Life goes on: a customer exits a supermarket in Copenhagen, Denmark. Credit:AP

“With Omicron, it is impossible to stop the spread of infection, even with severe restrictions,” said Grove Krause, before predicting that natural immunity would now combine with Denmark’s high vaccination rates to send the latest wave into decline by the middle of this month.

As far as community health is concerned, COVID-19 is now on a par with the common cold.

“It’s fantastic and I’m happy that I can go out and be young again, that we can go out and do all the things we used to do,” Stine Thrane Andreasson, a student, told Sweden’s Sydsvenskan newspaper.

“I didn’t think that restrictions were going to be taken away so soon. It feels like you’re doing something illegal when you go into a shop without a face mask.” 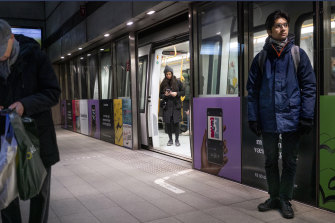 Of course, Denmark has been here before. In September 2021, it did almost exactly the same thing, only to U-turn in early November when Omicron hit. Museums, cinemas, theatres and concert venues closed over Christmas and masks and vaccine passports were required for almost everything else.

In the face of uncertainty about the new variant, the country did not want to chance its health system being overwhelmed.

“Throughout the pandemic, our data shows that the key worry of Danes is not their own health, but overwhelmed hospitals,” says Michael Bang Petersen, a professor of political science and government adviser, who led the country’s largest behavioural project during the crisis.

Jens Flinck Bertelsen, an architect arriving for work in Copenhagen, noted there was an “ambivalent feeling”, given the high infection rates, and the fact that restrictions had been lifted before.

Just as Tuesdays’s opening passed without angst or controversy, the same was true of November’s shutdown. Unlike in Sweden, or indeed much of the rest of the world, epidemiology in Denmark has not been politicised. Only the killing of up to 17 million mink in November 2020 generated real political heat.

Instead, social consensus and trust in government have been Denmark’s hallmarks. They are what many experts believe has made it one of the world’s top pandemic performers.

“If you have a strategy based on trust and solidarity, then you can actually open up with a relatively broad agreement, where the vulnerable and the elderly are accepting of the risks,” says Petersen.

The over-50s – 96 per cent of whom are fully vaccinated – are “taking on a personal responsibility” in order to allow younger groups to live life as normal again.

Instead, he suggests it’s “a trade-off” based on data – something that Denmark, with its world-class genetic sequencing and mass testing, has a lot of.

“What is interesting is that when we are looking at the opinion data that is available, even among the elderly there’s a majority who are supporting the lifting of restrictions,” says Petersen.

A recent listing of 23 OECD countries compiled by The Economist put Denmark top for economic performance over the last two years.

Denmark managed this despite restrictions and while keeping deaths-per-million at the 640 mark, about half the Western European average.

Indeed, if you look at many of the global charts on health performance during the pandemic, you often find Denmark bunched not with its European neighbours, but with Singapore and other east Asian countries.

Some point to Denmark’s infection rates, which were until last week heading up vertically, as evidence the country may be unwinding too soon. But Søren Brostrøm, director of the Danish Health Authority, says with Denmark’s leading rate of vaccination and the relative mildness of the Omicron variant, it no longer makes sense to look at infection rates.

“I’m keeping my sights on the seriously ill, and looking at figures for inpatients in intensive care units – which have just kept falling and falling and are now incredibly low,” he told the broadcaster TV2.

Even if the lifting of restrictions does lead to a final spike in infections, he predicted that rates would drop away soon after. “We have sky-high immunity in the population, partly due to our large vaccine acceptance, but also from the wide spread of Omicron,” said Brostrøm.

So will Denmark’s latest reopening hold – and, if so, what does it mean for the rest of us?

Mette Frederiksen, the Prime Minister, said Wednesday it was too early to know if measures just lifted may have to make a comeback. In contrast to Boris Johnson’s broken promise last spring – that the UK exit roadmap would be “irreversible”, before introducing “Plan B” measures – Frederiksen said: “I dare not say that it is a final goodbye to restrictions. We do not know […] whether there will be a new variant.”

Fredriksen has had a good pandemic. Denmark was the first country in northern Europe to bring in lockdown, on March 11 2020, and quickly established a pattern of moving hard and fast – in either direction – based on what the data and the precautionary principle dictate.

Lone Simonsen, an epidemiologist at Roskilde University, says: “If you asked me to put a crystal ball in front of me, I would say: ‘I think that this is the last sort of lockdown-crazy pandemic wave.’

“Having gone through two, three, four pandemic waves – which is normal for recent historical pandemics – I imagine COVID control will [soon be] similar to that of seasonal flu.”