It's one of New Zealand's spectacular locations, nestled among the mountains in the south-west corner of the South Island.

And 11 months into a pandemic that has up-ended the global economy, shut borders and smashed the tourism industry the world over, tourist-focused businesses in Queenstown have a simple message for Aussies who want to take a holiday across the pond: "we want you back". 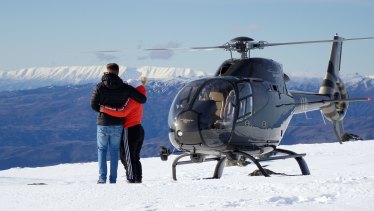 Tourists enjoy one of the spectacular views on offer from one of the mountains surrounding Queenstown, New Zealand.

While the district itself is home to only about 50,000 people, Destination Queenstown chief executive Ann Lockhart says the region — home to wineries, fine dining restaurants, cafes, spectacular ski fields and unspoiled nature — welcomed close to 2 million visitors per year, before the virus.

Of that about 70 per cent come from overseas, and about 60 per cent of those tourists are Australians, who flock to the town year round and make a vital contribution to the local economy.

Lockhart says most businesses in the region have managed to keep their head above water because of wage subsidies and an increase in domestic tourism, but that goes only part of the way to filling the gap.

"We are anxious, I suppose, is the word. Very, very keen to see the Australian bubble open. However, most New Zealanders being as pragmatic as we are, the first and more important thing is we support the welfare and health [of the community]," she said. 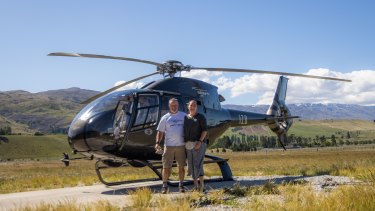 Jolanda Foale and her partner Richard with the helicopter they fly over scenic Queenstown and the surrounding region.

"The general population do not want to see the sacrifices that have been made over the last few months wasted. However, if you look at it from a purely business point of view, we see it as absolutely essential that we get the Australian border open, on the proviso it is safe to do so."

Jolanda Foale and her partner Richard run year-round helicopter tours that take visitors to the top of mountains such as the Remarkables.

Jolanda says that while local tourism has filled the breach, 70 per cent of the couple's Heliview Flights business comes from international tourists and the majority of those are Aussies.

Business for is "fragile", according to Jolanda, and "we are pining for certainty". 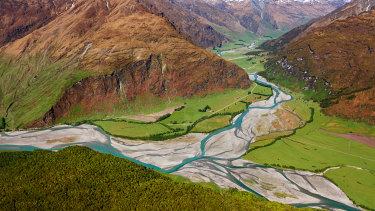 While she's cautious about rushing to open a two-way bubble, Jolanda says "we are hoping it will be as soon as possible".

"A big chunk of our customers are Aussies and they are great customers. They love to explore."

Scott's Base Vineyard and cellar door co-owner Carolyn Murray says that while the country's hard lockdown in March and April was necessary, the effect on business was "dire".

"We closed the vineyard completely when the first shutdown happened, it was really frightening […] but we survived because of the wage subsidy," she says.

"Now, although we don't have international tourists, it is beginning to feel relatively normal."

The other issue for horticulture and viticulture, Murray says, is the shortage of seasonal workers — an issue Australians farmers and growers are also facing.

It's not clear when exactly a two-way travel bubble between Australia and New Zealand will be opened. Kiwis can already travel to Australia without quarantining but NZ Prime Minister Jacinda Ardern has said the bubble will not be in place until Australia records 28 days without community transmission.

But Tourism and Trade Minister Simon Birmingham has said the Australian government wants it in place and operating before Christmas.

What is certain is that when, or if, the two-way bubble is open, Queenstown will welcome back Australians with open arms.

Get our Coronavirus Update newsletter for the day’s crucial developments and the numbers you need to know. Sign up to The Sydney Morning Herald’s newsletter here and The Age’s here.