Home » World News » 'We are all one': Met Police officer takes a knee in London protest

‘At the end of the day we are all one’: London police officer who took the knee outside Downing Street says he did it because ‘my colleagues are not racist’ and it was a ‘nice gesture’

A London police officer who took the knee outside Downing Street today as thousands gathered in the capital’s streets to protest the death of American George Flloyd has revealed he did so to show his colleagues ‘are not racist’.

One of the Met Police officers who took a knee during the Black Lives Matter protest revealed: ‘I did it because at the end of the day we’re all one.’

The officer, who is based in north London, showed his support for the campaign for justice for Mr Floyd and followed the lead set by officers in the US where the 46-year-old died.

Scotland Yard had earlier released a statement empathising with those angered by Mr Floyd’s death after his neck was pinned down by a Minneaplois officer for more than eight minutes.

Police are generally advised by their senior officers to refrain from any behaviour that might bring their impartiality into question.

But the officer said: ‘I know I’m not racist and I know that my colleagues are not racist, so why not? 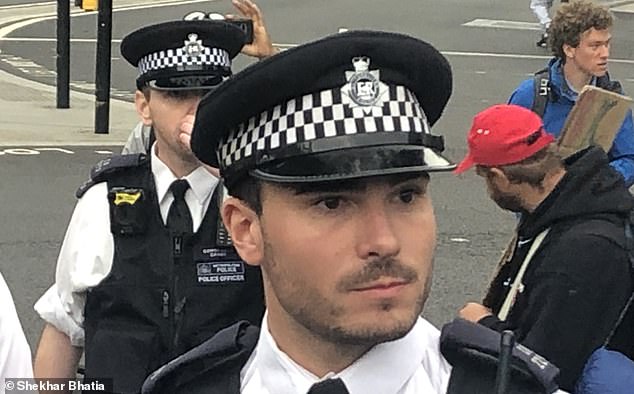 One of the Met Police officers (pictured) who took a knee during the Black Lives Matter protest revealed: ‘I did it because at the end of the day we’re all one.’ 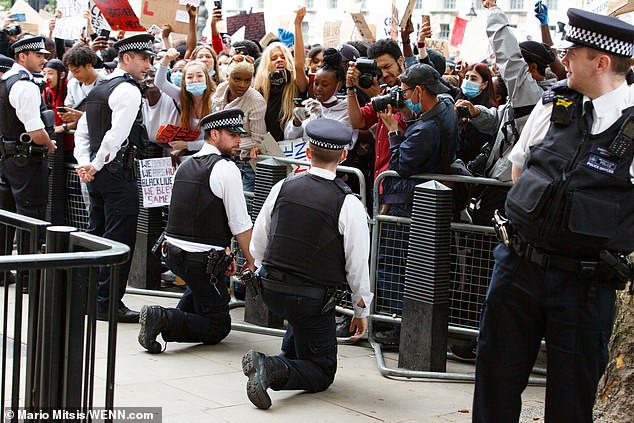 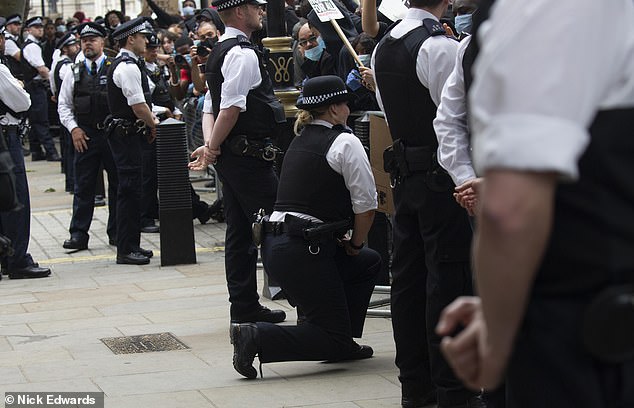 The officer, who is based in north London, showed his support for the campaign for justice for Mr Floyd and followed the lead set by officers in the US where the 46-year-old died 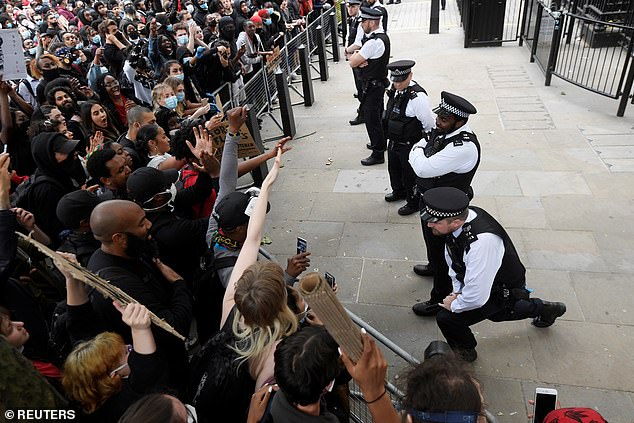 ‘I came into the job to help people and it was a nice gesture. A few of us decided to do it.’

‘We are are appalled and horrified’: Full statement from UK chief constables on George Floyd protests

‘We stand alongside all those across the globe who are appalled and horrified by the way George Floyd lost his life. Justice and accountability should follow.

‘We are also appalled to see the violence and damage that has happened in so many US cities since then. Our hearts go out to all those affected by these terrible events and hope that peace and order will soon be restored.

‘In the UK we have a long established tradition of policing by consent, working in communities to prevent crime and solve problems. Officers are trained to use force proportionately, lawfully and only when absolutely necessary. We strive to continuously learn and improve. We will tackle bias, racism or discrimination wherever we find it.

‘Policing is complex and challenging and sometimes we fall short. When we do, we are not afraid to shine a light on injustices or to be held to account.

‘The relationship between the police and the public in the UK is strong but there is always more to do. Every day, up and down the country, officers and staff are working to strengthen those relationships and address concerns. Only by working closely with our communities do we build trust and help keep people safe.

‘We know people want to make their voices heard. The right to lawful protest is key part of any democracy, which UK police uphold and facilitate. But coronavirus remains a deadly disease and there are still restrictions in place to prevent its spread, which include not gathering outside in groups of more than six people. So for whatever reason people want to come together, we ask that people continue to work with officers at this challenging time.’

A statement from Scotland Yard on the officers and their response is expected tonight.

At least 15,000 Black Lives Matter protesters including actor John Boyega and singer Liam Payne gathered in London, ignoring social distancing guidelines, as a show of anger against the death of Mr Floyd in the US.

And at least 2,000 of those demonstrated in front of Downing Street, shouting ‘take a knee’ at Metropolitan Police officers guarding security gates.

Four officers obliged, to the approval of the crowds, who urged other officers to follow the example of their colleagues.

The ‘take a knee’ movement started in the US with NFL star Colin Kaepernick and has become a symbol of anger and solidarity against racism across the world.

In the US, officers recently started taking a knee in support of protesters following days of unrest after Mr Floyd’s killing at the hands of police.

There were pockets of anger among the crowd, however, with protesters chanting ‘f** Boris’ and ‘f** Trump’.

At least three missiles were thrown at police lines, with one officer punched and at least one demonstrator arrested.

A cameraman was struck by a glass bottle and was pictured having his wound tended to by police.

However, the abuse was sporadic, with the crowd largely shouting down the culprits during the demonstration outside Downing Street.

Huge crowds had gathered in Hyde Park this afternoon as many campaigners wore face coverings and held signs with messages such as ‘Please, I can’t breathe’, ‘BLM’ and ‘Colour ≠ Crime’.

The rally comes as global demonstrations gather pace following the death of 46-year-old black man Mr Floyd who died after white police officer Derek Chauvin put his knee on his neck for nine minutes in Minneapolis on May 25.

It came after Prime Minister Boris Johnson today as he insisted ‘black lives matter’ and condemned the ‘sickening’ death of Mr Floyd.

Police were generally keeping in the background of the protest while their helicopters circled above. Banners included ‘Enough is Enough’, ‘Remember Smiley Culture’, ‘Remember Cherry Groce’, and ‘UK is not innocent’.

After leaving Hyde Park, the protesters clambered onto traffic lights as they marched down Park Lane towards Victoria. 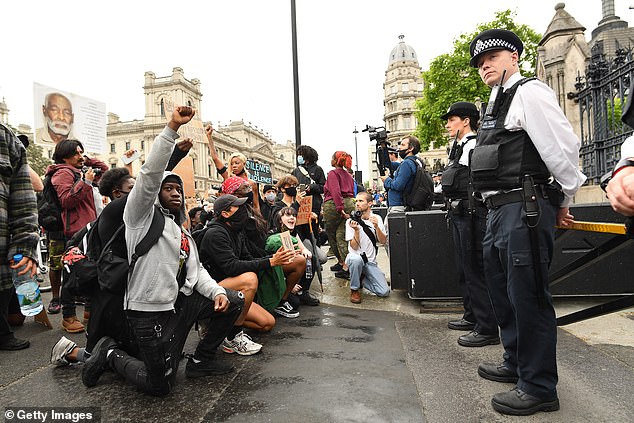 The ‘take a knee’ movement started in the US with NFL star Colin Kaepernick. Pictured: Protesters kneel in front of police during a Black Lives Matter protest in Hyde Park 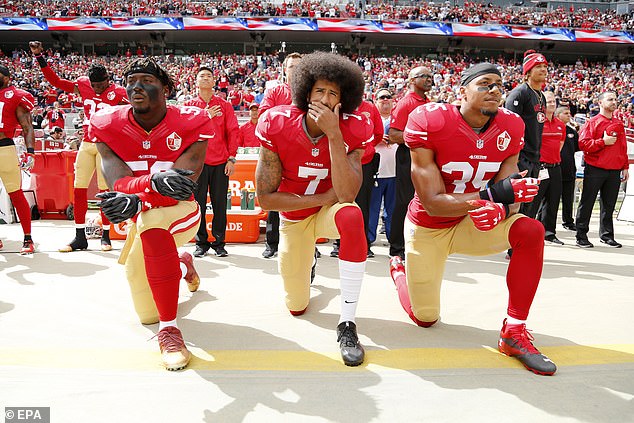 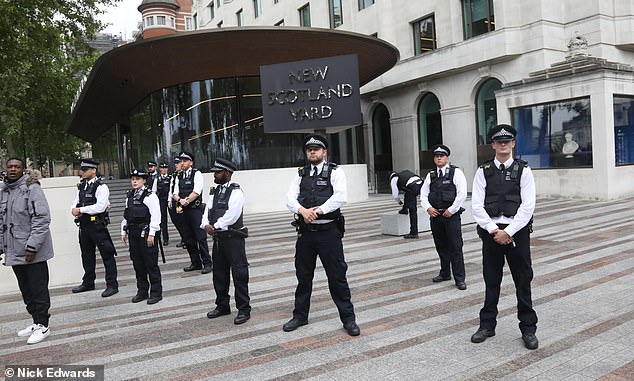 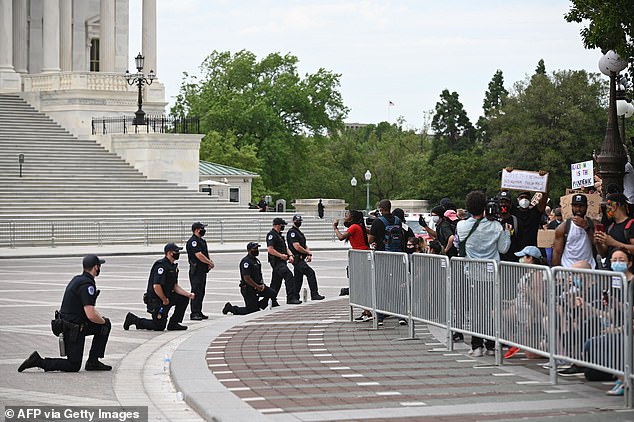 US Capitol police kneel as demonstrator protest the death of George Floyd at the US Capitol today. Police officers have been ‘taking a knee’ to show solidarity 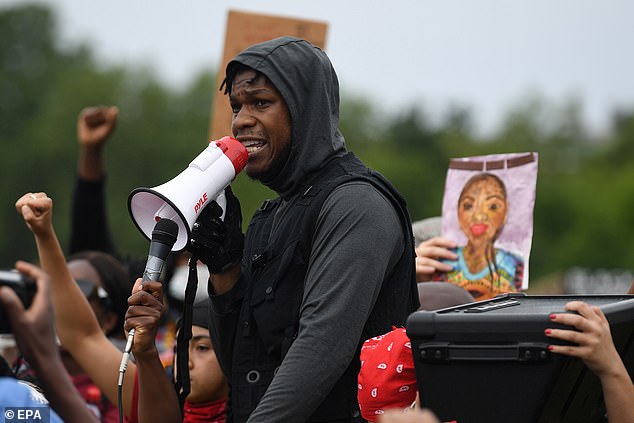 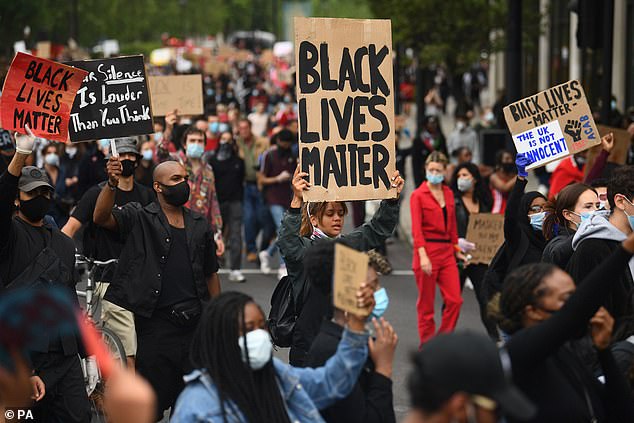 They then rallied in Parliament Square in the heart of Westminster where some of the demonstrators climbed up a statue of wartime prime minister Winston Churchill.

Bob Marley’s Three Little Birds blared out on a loudspeaker. One protester wore a Colin Kaepernick shirt after the black American footballer who started the knee protest in the US. Thousands of demonstrators at times went down on one knee chanting ‘George Floyd, George Floyd.’

It comes after UK chief constables joined forces to say they were ‘appalled and horrified’ by the death and called for ‘justice and accountability’, while warning those attending protests to do so while maintaining a safe distance.

Separately, anti-racism campaign group Stand Up to Racism urged Britons to ‘take the knee’ on their doorsteps at 6pm tonight for a protest against discrimination which is also backing the Black Lives Matter movement.

The protest in London, which come after days of intense protests and riots in America, took place as it was announced that all four of the officers involved in Mr Floyd’s death have now been charged and face 40 years behind bars.

Thomas Lane, J.A. Kueng and Tou Thao were all present when Derek Chauvin knelt on Floyd’s neck in Minneapolis on Monday for eight minutes and 46 seconds.

On Wednesday afternoon, the Minnesota AG charged the trio with aiding and abetting second degree murder which carries a maximum sentence of 40 years.

The new charge also alleges that he intentionally killed Floyd, without premeditation, whereas the old charge suggested it was unintentional.

The charges come after a week of global outrage and civil unrest across America during which millions called for the officers to be brought to justice.

Minnesota Attorney General Keith Ellison said at a press conference on Wednesday afternoon: ‘I strongly believe these developments are in the interest of justice for Mr Floyd, his family, this community and this state.’

The Floyd family called the charges a ‘bittersweet moment’.

Mr Johnson added his voice to condemnation as he was asked about the wave of furious protests across the US, which have spread around the world.

Footage has emerged of a police officer kneeling on Mr Floyd’s neck while he pleaded that he could not breathe.

At least 15,000 Black Lives Matter protesters including actor John Boyega and singer Liam Payne gathered in London, ignoring social distancing guidelines, as a show of anger against the death of Mr Floyd in the US. 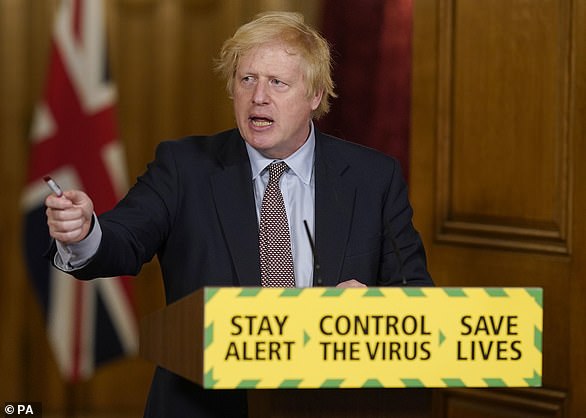 Mr Johnson added his voice to condemnation as he was asked about the wave of furious protests across the US, which have spread around the world

And at least 2,000 of those demonstrated in front of Downing Street, shouting ‘take a knee’ at Metropolitan Police officers guarding security gates.

Speaking just yards away at the daily Downing Street briefing this evening, Mr Johnson said: ‘We mourn George Floyd and I was appalled and sickened to see what happened to him.

‘And my message to President Trump, to everybody in the United States from the UK is that I don’t think racism – it’s an opinion I’m sure is shared by the overwhelming majority of people around the world – racism, racist violence has no place in our society.’

He said people had the right to protest but ‘I would urge people to protest peacefully, and in accordance with the rules on social distancing’.

Earlier, Mr Johnson dodged questions over the US President’s crackdown and warning that ‘looting means shooting’.

Pressed by Labour’s Keir Starmer over whether he would pass on to Mr Trump the ‘UK’s abhorrence about his response to the events’, Mr Johnson said: ‘I think what happened in the United States was appalling, it was inexcusable.

‘We all saw it on our screens and I perfectly understand people’s right to protest what took place. Though obviously I also believe that protest should take place in a lawful and reasonable way.’