Victorian fertility operators should be forced to get written consent from patients before providing unproven and expensive “add-on” treatments that are sold to boost a woman’s chances of conceiving through IVF without clear evidence they work.

The recommendation is one a suite of changes being called for by the state’s Health Complaints Commissioner, Karen Cusack, who is pushing for rogue fertility providers to be held to account following an investigation last year into the unethical practices of some IVF providers. 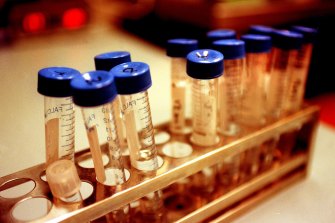 One in 20 Victorian children are born through assisted reproductive treatment.Credit:Louise Kennerley

More than 121 public submissions detailing concerning experiences with IVF were submitted. In her finding, Ms Cusack said the information provided to would-be parents varied between fertility providers and their chances of conceiving were not well explained.

She also called for more supportive counselling for those seeking in-vitro fertilisation, finding many operators saw it as a “tick box” exercise.

“There needs to be a minimum, consistent approach to the information provided,” Ms Cusack wrote in her findings. “Over all, communication by many providers – including fertility specialists, nurses and administrative staff – is either poorly delivered or is ineffective.”

Ms Cusack also noted it was difficult for consumers to obtain transparency around success rates with promotional information often confusing and misleading.

The chances of taking home a baby are still largely dependent on a woman’s age and the IVF clinics treating them. Individual clinic success rates range between 7 per cent and 31 per cent of cycles.

One in 20 Victorian children is born through assisted reproductive treatment, and the industry generates annually an estimated $550 million nationally, according to the Victorian Assisted Reproductive Treatment Authority.

In late 2019, a consortium of international fertility experts, including researchers from Melbourne’s Monash University, argued that some IVF add-on procedures, which ramp up the already steep out-of-pocket costs for aspiring parents, can even reduce the likelihood of conceiving.

The lawsuit follows a landmark review of assisted reproductive services led by lawyer Michael Gorton, which looked at whether there are enough safeguards to protect people using, or intending to use, such treatments.

The inquiry found some would-be parents had fallen victim to rogue operators, including one doctor who allegedly knowingly transferred an unviable embryo into a patient.

In another case, clinicians allegedly failed to disclose equipment failures and instead led patients to believe their embryos had succumbed naturally.

About 13,000 Victorians were treated at fertility clinics in the last financial year with an average IVF cycle costing as much as $15,000. Only about one in every three women who receives IVF has a child as a result of the treatment.