Complaints from furious residents about ‘horrendous potholes’ have fallen on deaf ears, after their local council announced there were ‘no defects’ in the road.

Neighbours in Churchdown, Gloucestershire, were left dismayed after complaining to the county council about their ‘dangerous’ cul-de-sac.

Residents have previously told officials about Kent Road’s poor surface – which has damaged cars and caused people to trip.

Despite inspectors declaring there were ‘no defects’, pictures show potholes littered throughout Kent Road in the village.

John Armstrong, 70, is worried for older neighbours on the street. 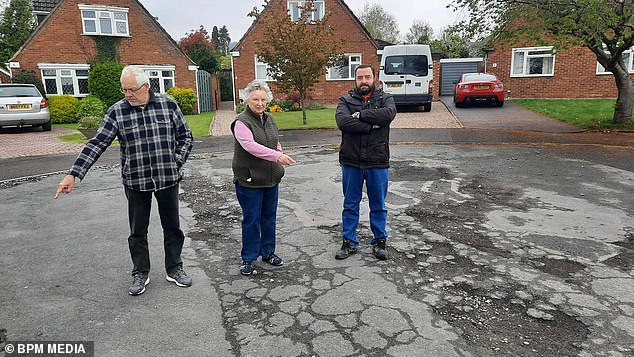 ‘There are some horrendous potholes,’ he said.

‘The road is absolutely full of chipping and stones.

‘Some of the holes are quite big. It’s not a young street – most people are sort of in their 60s or older. It’s dangerous.

‘I haven’t got a lot of history to go back on, but other neighbours have said this isn’t a new thing.’ 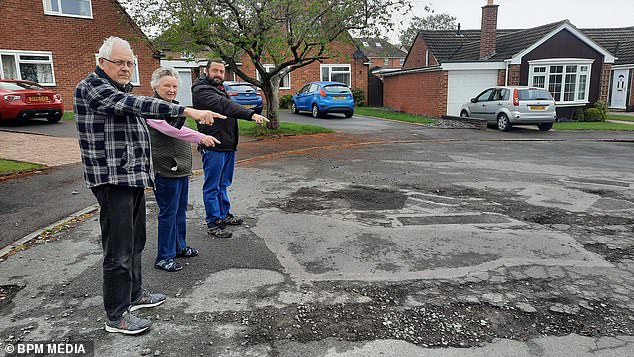 Despite pictures showing the potholes and uneven surface, officials said there were ‘no defects’ in the cul-de-sac 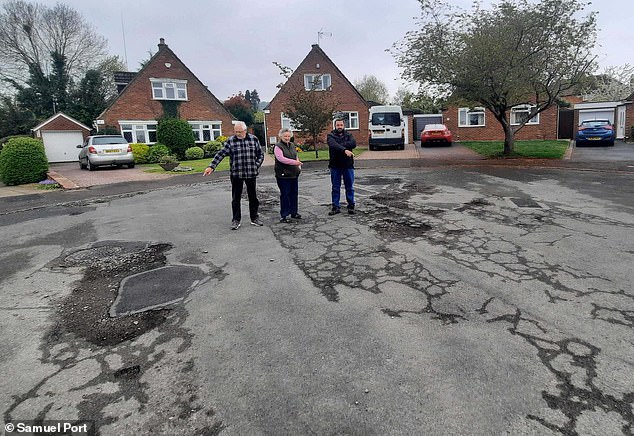 John said the council previously told him the potholes must be of a certain size to warrant action being taken.

Inspectors were sent to inspect the cul-de-sac, after another neighbour, David Murray, 45, sent images to the council highlighting the safety issues with the current state of the street.

But despite the clear potholes and uneven surface, officials said there wasn’t a problem worth fixing.

The road maintenance team responded: ‘An inspection has been carried out and no defect(s), in line with the Gloucestershire County Council Highways Safety Inspection Policy, were identified.’

A furious Mr Murray replied: ‘Most councils are a joke, even their hiked-up council tax they charge for an absolutely limited rubbish service!’

Maxine Squire, who has lived on the road for nearly 60 years said: ‘The road has got worse over the last four or five years.

‘They come every so often and fill in bits and pieces. It’s not so bad my end, but it is far worse at the top.’

A spokesperson for Gloucestershire County Council said: ‘We would like to thank residents for bringing their concerns regarding the current condition of the carriageway in Kent Close, in Churchdown, to our attention.

‘The road is inspected regularly in line with our Safety Inspection policy which follows national guidance, and any potholes that meet intervention level are then programmed for repair.

‘We will undertake further investigations to establish how we can improve the current condition of this section of the carriageway in Kent Close.’