Victoria is still on track to immunise 40,000 people against coronavirus in the first month of the vaccine program with public health experts arguing its “slow and steady” model, which has seen it lag behind other Australian states, was a wise approach.

New data on Australia’s COVID-19 vaccine rollout has revealed performance on a state-by-state basis has varied significantly during the first week of the Pfizer distribution effort.

The news comes as federal Health Minister Greg Hunt on Tuesday announced Australia had received its third shipment of Pfizer bringing the total to 443,000 in addition to 300,000 AstraZeneca doses already received. This means Australia now has a total of 733,000 doses that have arrived from overseas.

Victoria will get another 76,000 vaccine doses in the next 10 days, Mr Hunt said.

While NSW is leading the way nationally, using almost 75 per cent of its more than 14,000 doses in the first week, Victoria and Queensland have fallen behind, using fewer than a third of the doses distributed to them.

Victoria used 3862 of its 12,870 doses in the first seven days. This has now jumped to more than 5000 doses after a Western Health vaccine clinic, being run out of the Royal Melbourne Hospital, opened this week. The clinic has been vaccinating more than 30 Victorian healthcare workers every hour since early Monday morning.

Jane Halton, from the National COVID-19 Co-ordination Commission, said “slow and steady” at the beginning of the vaccine rollout was wise, noting that the numbers of doses used in Victoria had increased at the tail end of last week. 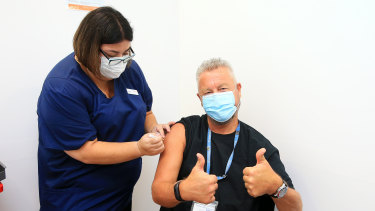 Dr Chris Quinn, who has been working in hotel quarantine, receives one of the first Pfizer COVID-19 vaccines at Austin Health in Melbourne, administered by nurse Jessica Amalfi.Credit:Mark Stewart

“I’m not at all worried about the numbers at this early stage,” she said. “Everyone is still learning how to do this. But if they haven’t sped up in a couple of weeks I will start to worry about it, but certainly, a proven and cautious approach at the beginning is quite sensible.”

Australia Medical Association Victorian president Julian Rait was also unfazed that Victoria was trailing other states in the early stages of the rollout.

“You want to get the inoculators, who are vaccinating people, immunised first and for them to build up some immunity to the virus before you really scale it up,” he said. “You also really want to make sure that you can do it effectively so there is no wastage.”

Professor Stephen Duckett, director of health at the Grattan Institute and former secretary of the Commonwealth Department of Health, remained confident Victoria will reach its target of 40,000 doses in the first four weeks.

“It’s not like the target in Victoria is a million people every week,” he said. “This is a very manageable logistical exercise.”

Professor Duckett was also largely supportive of Victoria’s staggered vaccine rollout of for healthcare workers, which is a slower model for inoculating frontline medical workers than some other states, including NSW. He argued it was sensible that hotel quarantine and border workers be prioritised as they were most at risk of being infected.

In NSW, roughly 1200 people were immunised against COVID-19 on the first day of the vaccine program including hundreds of healthcare workers with hubs opened in three major hospitals in Sydney.

Chair of epidemiology at Deakin University, Professor Catherine Bennett, said Victoria could only go as fast as its public health infrastructure allowed.

“We are building up slowly and steadily,” Professor Bennett said. “The pace you can go all depends on how your health system is set up to begin. This is a partnership with the Australian government, but it is the states who are overseeing the rollout so they will all have slightly different designs.”

Professor Bennett said racing to vaccinate people to reach targets was not safe and could also inadvertently undermine the health response.

“Setting up the first vaccine clinics in Victoria and getting the 1000 people vaccinated at the airport in the first week is a really important start because it shows the public how this all transpires,” Professor Bennett said.

“If you had a situation where there was a bit of chaos, or people were complaining because they had to queue, then that would be the thing that gets publicised and it can put people off.”

The numbers of vaccinations in Victoria are predicted to steadily increase over the next two weeks with healthcare workers from the Royal Women’s Hospital, Peter MacCallum Cancer Centre and the Royal Children’s Hospital all rolling up their sleeves to be vaccinated in the coming days at the Royal Melbourne Hospital hub.

Victorian Health Minister Martin Foley on Monday called on the federal government to be more transparent about its rollout.

His comments came following revelations a handful of resident had been given the wrong dose of the vaccine at an aged care home in Brisbane. In a separate incident in Victoria, a small number of vials of the Pfizer vaccine had to be thrown out after it could not be confirmed they had been stored at the correct temperature.

A Victorian government spokeswoman said the state remained on track to deliver 40,000 vaccines before the end of March.

“We’ve started by ensuring all the systems for this huge logistical undertaking are safely in place and we believe that’s the right approach,” she said.