It was meant to be Jude Rainsford’s dream car: a roomy vehicle that would give her the freedom to visit friends and family with her wheelchair tucked in the back.

But the 58-year-old said the 2005 Kia she purchased from used car dealer AutoMax has turned into a nightmare.

The vehicle broke down two weeks after she purchased it from the company’s Dandenong dealership in late March and has been sitting in her driveway ever since. 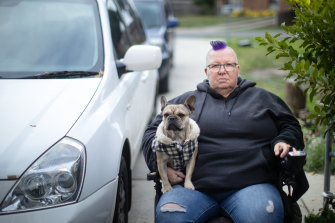 Jude Rainsford said the car she purchased from Automax is undriveable.Credit:Simon Schluter

She said the $11,000 car, which she spent three years saving for on a carer allowance, shakes uncontrollably when she drives, and her mechanic has identified two major oil leaks.

“It was meant to change our lives and now it’s sitting in a driveway and undriveable,” she said.

Since August 2019, the Consumer Action Law Centre has assisted 14 disgruntled consumers who have purchased used cars from AutoMax and it is now representing Ms Rainsford.

Katherine Temple, the centre’s director of policy and campaigns, said some consumers had purchased cars that broke down soon after leaving the dealerships. Others have struggled to resolve issues with their cars.

“The trader appears to be routinely supplying defective cars to people,” she said.

In 2019, in two separate cases not involving the law centre, VCAT found that CMG Automotive, which trades as AutoMax and describes itself as Victoria’s largest independent car dealer, supplied cars to consumers that were not of acceptable quality.

In one case, the tribunal ordered the company to pay applicants $12,900 for the cost of a replacement motor. In the other case, it was ordered to pay a Victorian man $7541 for the repair of a clutch, suspension, alternator and fuel injectors – but he said he hasn’t received the money.

Victorian Automotive Chamber of Commerce chief executive Geoff Gwilym said used car sales had boomed during the pandemic, along with their price tags, and people’s expectations were sometimes unrealistic. He said there was no benefit in a dealership buying cars in a poor condition and then passing them on.

The chamber estimates that used car sales in Victorian have increased by 10 per cent over the pandemic, with commuters shunning public transport and buying an additional 100,000 second-hand vehicles.

Jude Rainsford said she’s spent more than a month trying to get AutoMax to fix her car or refund her. She’s now unable to visit her son, who has a disability and lives in supported accommodation.

“This is not a luxury for me,” she said. “This is essential.” After The Age contacted CMG Automotive on Friday, Ms Rainsford said the company offered to tow her car back to its mechanic, fix it and fill it with petrol.

CMG Automotive did not respond to questions.

Duncan Bayne purchased a car from Automax’s Dandenong dealership last February and is now pursuing the company in VCAT. He is demanding that it repair what he claims is a faulty instrument cluster and transmission.

He said the Land Rover he purchased to transport his three children to school began shuddering “dreadfully” within hours of him leaving the dealership.

“We have been driving it and crossing our fingers,” he said. “We try to minimise the amount of kilometres and steer clear of freeways because if it’s going to fail we don’t want it to happen there. The experience has turned the shine off buying a car.”

A Consumer Affairs Victoria spokeswoman said anyone who purchases a vehicle that doesn’t work as it should is entitled to a refund, replacement, or repair under Australian consumer law.

It received 3106 enquiries and complaints related to used car sales in 2019-20, compared with 3587 the previous year.