Victoria has recorded 11 new cases for the second consecutive day, with less than 10 days remaining to reach the state's targets for easing lockdown restrictions.

The state also recorded another fatality-free day, with the death toll remaining at 809.

The latest cases bring the statewide 14-day average, which is tied to the next stage of easing lockdown, to 9.8 new cases per day.

For Melbourne to move to step three of the state government's road map for easing restrictions on October 19, Victoria's 14-day average for new cases has to be below five.

There also needs to be five or fewer mystery cases between October 4 and October 18 in order for restrictions to ease on schedule.

The current fortnightly tally of mystery cases (between September 23 and October 6) stands at 12.

Deputy Chief Health Officer Allen Cheng said on Thursday that chance would play a big role in whether the state reaches the benchmark for easing calling it a day-by-day proposition.

Premier Daniel Andrews said there was "very little chance" that absolutely no changes to restrictions would happen on October 19, but warned steps could be small if numbers weren't ideal.

"We'll look to make as many changes as we can," he said. "I can't rule out anything at this stage."

It comes amid confusion over contact tracing, with families connected to the Kilmore COVID-19 outbreak receiving conflicting advice from health authorities.

The Kilmore outbreak, which grew from two to four people on Thursday, began after a Melburnian with permission to leave the city stopped illegally to dine at the Oddfellows Cafe on September 30 and infected a waitress who tested positive to COVID-19 on Saturday evening.

The Melbourne man was linked to the state's largest active cluster, of 31 people, which is connected to The Butcher Club at Chadstone shopping centre.

Angela Lawton dined at the Oddfellows Cafe on Thursday, before giving birth to her son Evander in hospital on Friday. She was discharged from hospital on Monday when her friends told her the cafe had been identified as an exposure site. 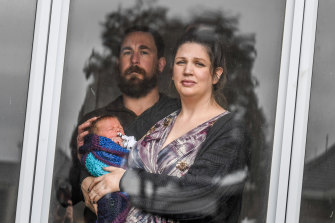 David and Angela Lawton with their new baby, Evander.Credit:Justin McManus

She called the coronavirus hotline on Tuesday morning and says she was advised not to get tested or isolate unless she developed symptoms. Later that night, she was contacted by Goulburn Valley Health advising her that she should in fact get tested.

"In addition to all the other things with a newborn, it was terrifying to think I could’ve been patient zero for a serious outbreak in a maternity ward," Ms Lawton said.