The Victorian government is failing to reach key targets to improve the education of Aboriginal students, with Indigenous children in public high schools missing more than seven weeks of school per year on average.

While completion rates for year 12 are steadily improving on key measures, some Indigenous students appear to be falling further behind on NAPLAN results, with Aboriginal leaders saying these scores are a blunt instrument to assess student progress. 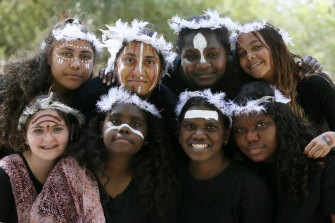 Academically, while non-Aboriginal year 3 students improved their NAPLAN numeracy scores so that 71.8 per cent achieved scores above the bottom three bands last year, the results for many Aboriginal students went the other way, the Victorian budget papers show.

Just 44.2 per cent of Aboriginal year 3 students finished above the bottom three bands, short of the government’s target of 46.7 per cent and down on the previous year’s result of 44.9 per cent.

Similarly for year 3 reading results, the proportion of Aboriginal students above the bottom three bands fell from 56.1 per cent in 2018 to 51.9 per cent last year, significantly below the Victorian government's target of 58.2 per cent.

The NAPLAN test results for Aboriginal students in year 7 improved over the past year with the proportion above the bottom three bands growing from 25.5 per cent in 2018 to 28.9 per cent in the numeracy test. However, this was still short of the government’s target last year of 29.7 per cent. The results for students in year 9 declined year-on-year in numeracy, while improving slightly in literacy. 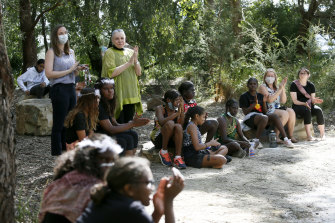 Lois Peeler, principal of Worawa Aboriginal College in Healesville, said she was unsurprised by the NAPLAN results because they were "not a good thing for measuring our Aboriginal cohort".

"The results cannot be an accurate measure," she said. "They do not factor in that many students do not have English as their first language and most of the topics and contexts are highly unfamiliar to many Aboriginal as well as non-Aboriginal students. Commitment to mainstream and Aboriginal society and values is rarely understood."

Dr Peeler, who has family links to the Cummeragunja Aboriginal Reserve on the NSW-Victorian border, said students often arrived at her girls' boarding school in year 7 with a rich knowledge of their first language but limited English language and numeracy skills. Others arrive with highly interrupted schooling.

"Balancing the commitments of two very different cultures is complex and many students have cultural obligations that are vital," Dr Peeler said.

"Aboriginal students are reflected in the curriculum and learning environment at Worawa, but there is a long way to go in mainstream education, including NAPLAN, in this regard.

"We focus a lot on being able to express and be proud of your cultural identity. Pride in your culture is important for anybody's wellbeing, I think. It helps academic results but also in preparing the girls to navigate their way through the mainstream or return to their communities as leaders."

He echoed Dr Peeler's statement that governments should not overemphasise NAPLAN results, and said concerning attendance rates should be viewed as a structural issue in schools, rather than a sole problem of students or families.

"We can ensure our teachers are culturally aware of the diversity in their classrooms, particularly our First Nations kids," Dr Guenther said.

"There are systemic issues – we have to change the language we use, so we don't call Aboriginal children "disadvantaged", which labels them as something other than normal and discourages them from going to school. There's no real rocket science: it's partly about respect, raising awareness and putting structures in place to help students be their best."

Dr Peeler suggested Aboriginal students' poor attendance figures were a result of recurring pressures inside the school gates and at home. 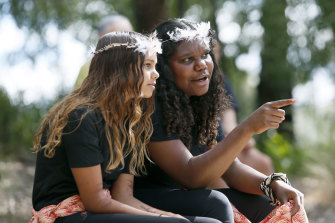 Students at Worawa College come from communities across Australia.Credit:David Callow

"Some of the circumstances that Aboriginal families find themselves in can stem from intergenerational trauma, the socioeconomic position of families. The effect of that on students would have certainly been exacerbated this year as they spent more time at home and more technology was required," she said.

"I have to say that racism continues to play a part in this in schools too, because we [Aboriginal people] are a minority. Our numbers in most cases in mainstream schools are very small, so kids being kids will point out the differences. Your desire to go to school drops when you feel you are targeted or exiled."

Tuesday's $49 billion state budget included a relatively modest investment of $105.7 million this year specifically for Aboriginal initiatives, while a total of $1.2 billion will be plunged into educational improvements such as school upgrades across Victoria.

There are about 15,000 Aboriginal students in Victoria.

"While we have made significant improvements, we know there is a lot more that needs to be done," he said.

"That is why specialised and targeted education supports will be provided throughout 2021 to ensure students that may have fallen behind are supported to catch-up."

Mr Merlino added that figures for Aboriginal students achieving in the top two NAPLAN bands had grown since 2015, though this measure was not included in the budget figures.

The Victorian government's targets for Indigenous education are separate from the national 'Closing the Gap' targets, which were first set in 2008 and just two of them — early childhood education and Year 12 attainment — were achieved by 2019.

The scheme was effectively dumped for a new a new national agreement between Indigenous organisations and governments around Australia. Efforts to meet targets for school attendance, child mortality, employment, life expectancy and literacy and numeracy for Aboriginal and Torres Strait Islander people failed.

Last month, the Productivity Commission found that, despite massive spending to address disadvantage, governments’ evidence of what works to improve outcomes was thin, with many programs developed without adequate consultation with Aboriginal and Torres Strait Islander communities.