The remains of World War II sailors and Marines who died on the USS Oklahoma in Pearl Harbor will be returned for burial in Hawaii today.

The Defense POW/MIA Accounting Agency (DPAA) undertook the incredible task of identifying the remains of individuals who were aboard the USS Oklahoma when it sank during the Dec. 7, 1941, attack on Pearl Harbor. 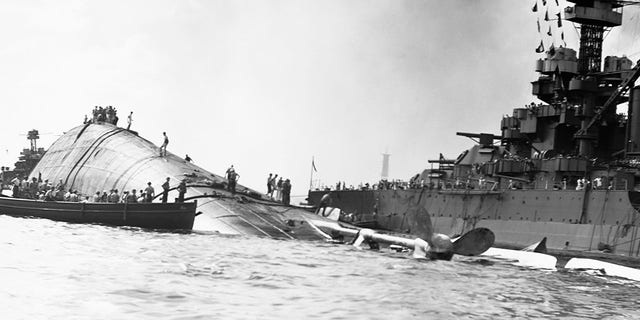 The USS Oklahoma floats capsized near the USS Maryland. The ships were destroyed during the Japanese attack on Pearl Harbor on September 7, 1941. (Photo by © CORBIS/Corbis via Getty Images)

The vessel was moored at Ford Island, Pearl Harbor, when the attack commenced. The USS Oklahoma sustained multiple torpedo hits, causing it to capsize and resulting in the death of 429 crewmen.

The remains were recovered between December 1941 and June 1944 and subsequently interred in the Halawa and Nu’uanu Cemeteries.

An initial effort in 1947 at Schofield Barracks in Honolulu resulted in the identification of 35 men from aboard the USS Oklahoma. A second, more exhaustive effort commenced in the summer of 2015, with DPAA anthropologists at Offutt Air Force Base in Nebraska analyzing over 13,000 bones to identify them as the missing soldiers and Marines.

The DPAA reached out to family members of the officers to obtain DNA testing to assist the process – without it, the project would have not been nearly as successful as it was.

To date, the project has identified 388 individuals, which is 86% of the crew that was aboard the vessel at the time. The DPAA has projected that it will identify 90% of the crew by the end of the project.

The project aimed to return the remains to Hawaii on June 2, but the group was delayed due to “military aircraft mission requirements.” Honorable Carry ceremonies in Hawaii and Nebraska to honor the crewmen were rescheduled as well.

The remains will now be interred at the National Memorial Cemetery of the Pacific on the 80th anniversary of the attack on Pearl Harbor later this year, KHON 2 reported.

The DPAA Director Kelly McKeague praised the project for its success and ability to provide some closure to the families of the deceased.