Ursula von der Leyen – the EU chief being savaged across the continent for the bloc’s shambolic vaccine roll-out – was parachuted into the job in 2019 after an erratic spell in the German cabinet which saw her labelled ‘the government’s weakest minister’.

A trained gynaecologist, keen equestrian and mother of seven who once lived in London under a fake name because of terrorist threats against her father in West Germany, von der Leyen followed him into politics and quickly rose up the ranks.

But there were raised eyebrows in Germany when she was vaulted from Berlin’s defence ministry into Europe’s top job in 2019, with her own coalition partners releasing a dossier accusing her of leaving the German military in a ‘shabby state’.

Now von der Leyen, 62, faces fury across Europe over missing vaccine supplies and a roll-out trailing far behind Britain and the US, as well as a bungled move to impose export controls in Ireland which united London and Dublin in opposition. 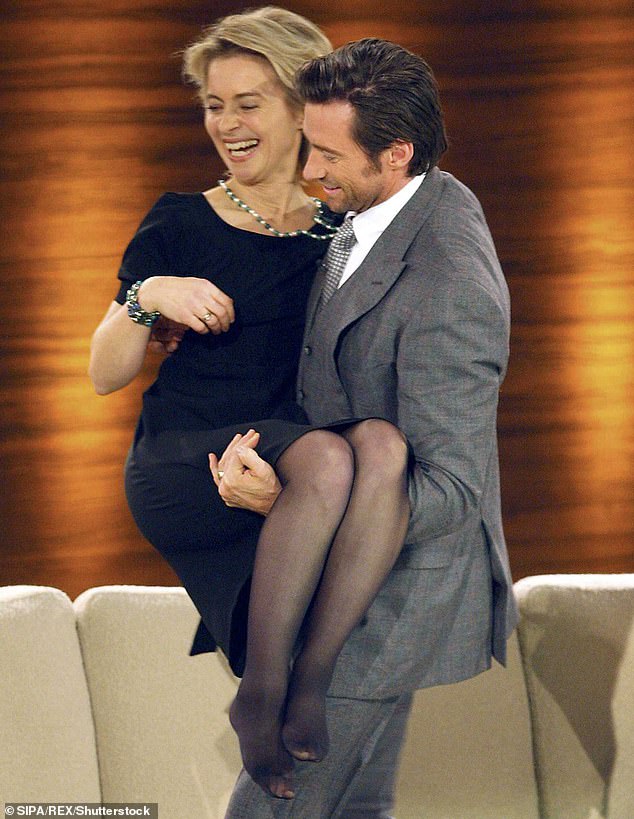 Von der Leyen is carried by Australian actor Hugh Jackman on an episode of a German TV show in December 2008, when she was families minister in Angela Merkel’s first cabinet 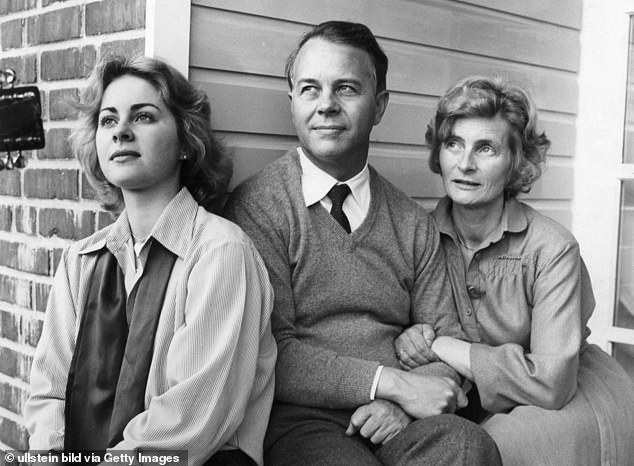 A 19-year-old Ursula Albrecht (left), as she was then known, sits with her father Ernst Albrecht – a politician, Brussels official and chocolate biscuit executive – and his wife Heidi-Adele in 1978 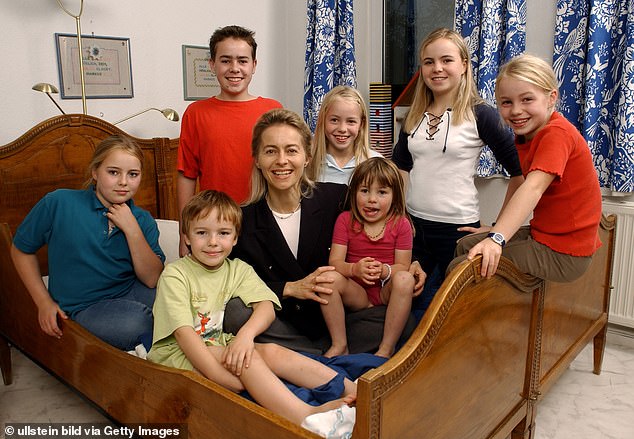 Von der Leyen with her seven children – Donata, Egmont, David, Johanna, Gracia, Sophie and Victoria – in 2003 when she was a state minister in Lower Saxony

Born in 1958, von der Leyen is the daughter of Ernst Albrecht, a Brussels official and chocolate biscuit executive who later became the state premier of Lower Saxony.

As a member of the conservative CDU, he was seen as a potential target for the far-left Baader-Meinhof terrorists who were plaguing West Germany at the time.

Amid fears that the young Ursula would be targeted, she adopted the false name ‘Rose Ladson’ while studying at the London School of Economics in the 1970s.

Having also lived in Belgium and the United States, she eventually moved back to West Germany and trained as a gynaecologist.

She was awarded a PhD from Hanover Medical School – although this later came under scrutiny when a law professor accused her of plagiarism in 2015.

The university eventually cleared her, saying her copied passages were ‘a mistake, not misconduct’ – saving her from the ignominy of being the third Merkel minister in four years to resign because of academic plagiarism.

Her political career began after German reunification as an official in the CDU and subsequently a health minister in Lower Saxony, where her father had been premier.

In 2005, she became Germany’s family affairs minister in Angela Merkel’s first cabinet, a role in which she often discussed her own large family – having had seven children between 1987 and 1999 with her husband Heiko von der Leyen. 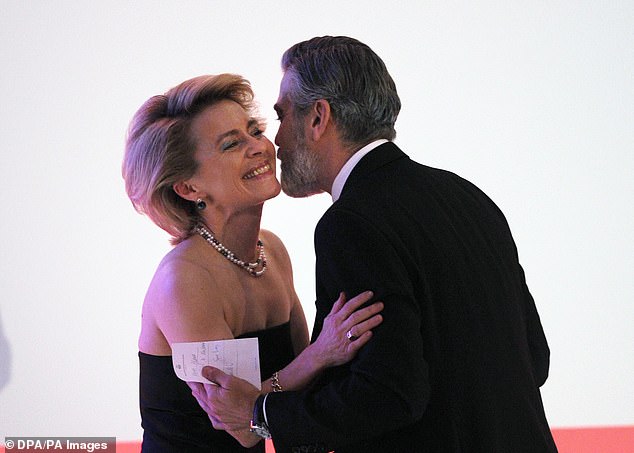 Von der Leyen, then German labour minister, gets a kiss on the cheek from George Clooney after giving him an award for his peace work at a ceremony in 2013 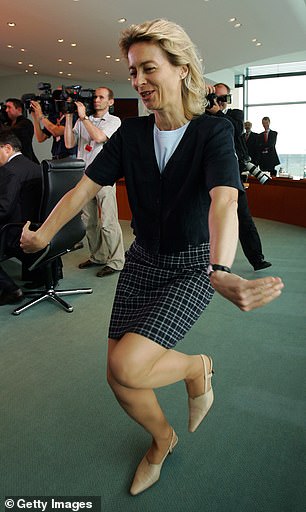 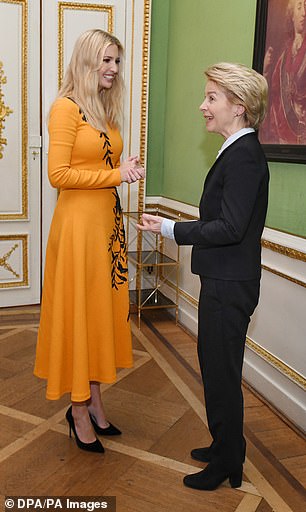 Von der Leyen is pictured left arriving at a cabinet meeting in Berlin in 2007, and left meeting Ivanka Trump at a security conference in Munich in 2019 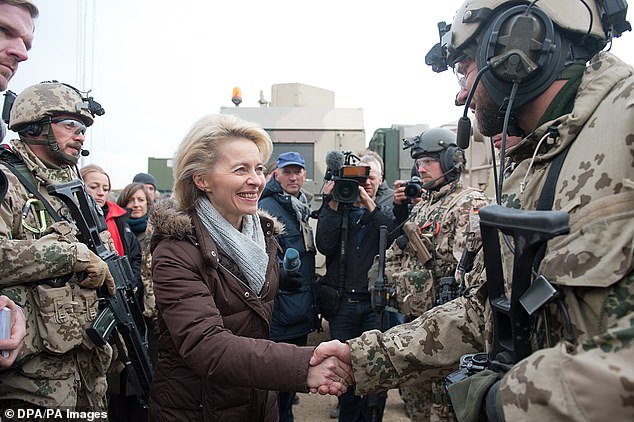 Von der Leyen meets soldiers from Germany’s Bundeswehr in Afghanistan in December 2013, soon after her appointment as the country’s first female defence minister

Seen as a moderate conservative, she openly supported same-sex marriage before Merkel did and supported a minimum wage when she was labour minister.

She was also credited with helping to modernise the image of Merkel’s party, once appearing on a TV show where actor Hugh Jackman hoisted her out of a barrel.

On another occasion she got a kiss from George Clooney after handing him an award for promoting peace.

In 2010, she was in the running to become the first female president of Germany, a mostly ceremonial position chosen by MPs and regional lawmakers.

Although she did not get the job, von der Leyen became a CDU deputy leader later that year and was sometimes talked about as a future successor to Merkel.

But her reputation took a number of setbacks during her tenure as German defence minister, a post she was given in Merkel’s third cabinet in 2013.

The army was engulfed by scandal when an officer was arrested for allegedly plotting to disguise himself as an asylum seeker and stage a militant attack in order to frame Syrian refugees.

It also emerged that German army chiefs had been aware of an extremist thesis he had written in 2014 in which he argued that human rights would lead to the genocide of Western peoples – but he was still allowed to serve as a soldier.

Under pressure for failing to stamp out right-wing extremism in the ranks, von der Leyen lashed out at ‘weak leadership’ in the Bundeswehr. 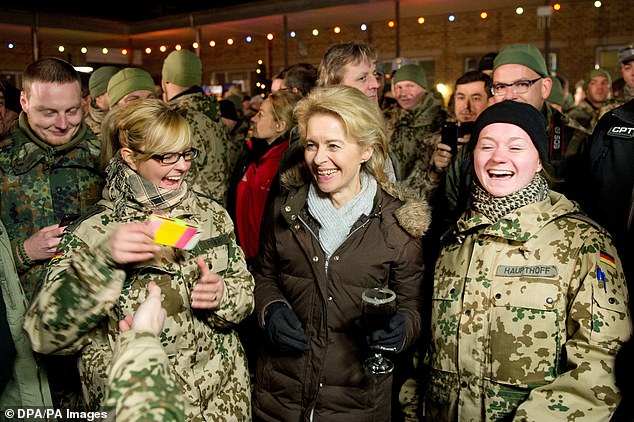 Von der Leyen, pictured with female soldiers at a camp in Afghanistan in 2013, faced heavy criticism over her time as defence secretary under Angela Merkel 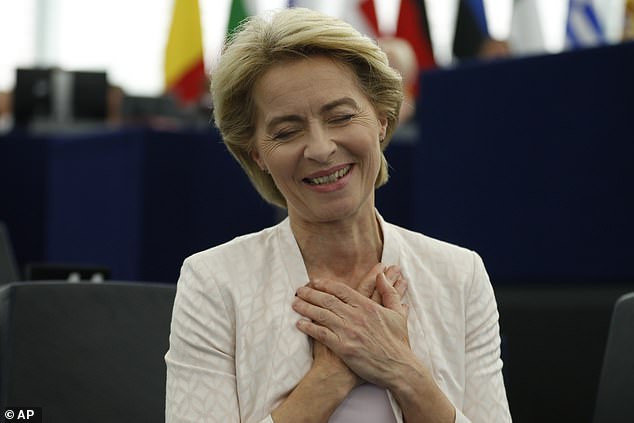 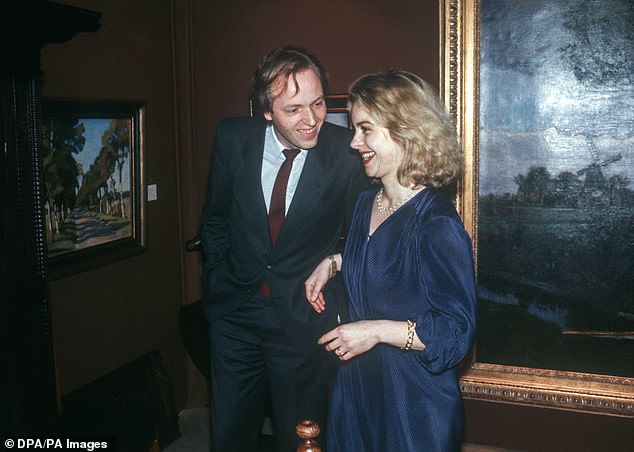 A 27-year-old Ursula Albrecht with her then-fiance, now husband, fellow doctor Heiko von der Leyen in 1986 – when her father was state premier of Lower Saxony

And her own leadership was plagued by further problems including equipment shortages which caused consternation among fellow NATO countries.

In 2019, a parliamentary report said fewer than half of Germany’s Eurofighter and Tornado jets had been ready for combat the previous year.

The military had to scrounge for enough night vision goggles, body armour and other equipment to be able to lead NATO’s rapid response troop in 2019.

Von der Leyen was also blamed for a ‘cost explosion’ in the refurbishment of a military training ship, which cost 10 times more than planned.

Nonetheless, she remained defence minister until 2019 when European Parliament elections took place – with the Commission presidency vacant at the end of Jean-Claude Juncker’s five-year term.

Von der Leyen was not a candidate at the elections, with the right putting forward Germany’s Manfred Weber and the left nominating Dutchman Frans Timmermans.

But neither of these candidates were accepted by EU leaders, undermining a system that was meant to give democratic legitimacy to the Commission chief.

Instead, von der Leyen’s name emerged nearly out of the blue as an alternative choice to head the Commission. 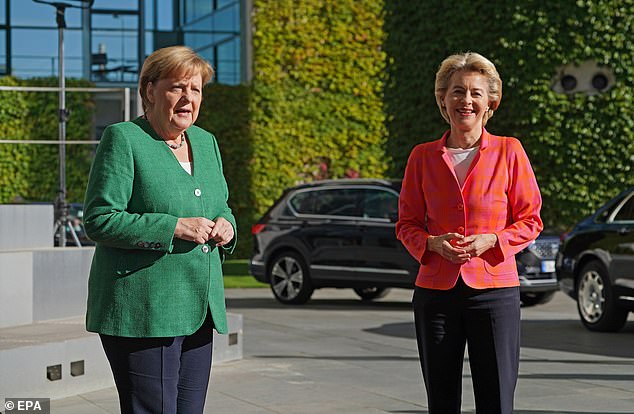 Merkel and von der Leyen, pictured at the chancellery in Berlin last year, were seen as close cabinet colleagues in Merkel’s various coalitions 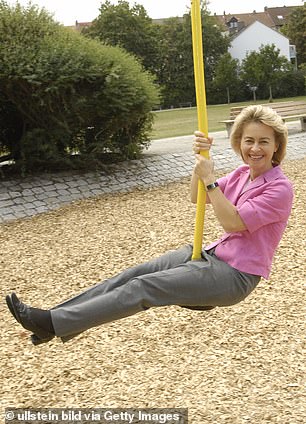 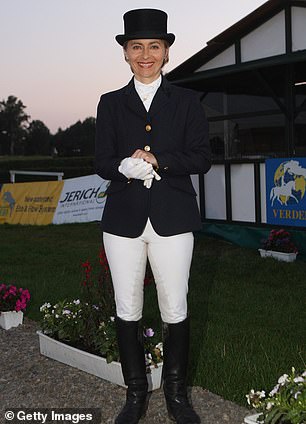 Von der Leyen, pictured on a swing and in equestrian gear when she was families minister, was seen as having helped to modernise the image of Merkel’s CDU party

While her nomination broke the stalemate in Brussels, it raised eyebrows in Germany given her patchy record as defence minister for the last six years.

Merkel’s junior coalition partners, the Social Democratic Party (SPD), opposed her appointment and published a paper calling her an ‘inadequate and inappropriate candidate’ to lead the Commission.

‘From the very beginning, she overestimated herself,’ the dossier said, adding that she had left the Bundeswehr in a ‘shabby state’.

Martin Schulz, a former SPD figurehead, said at the time: ‘Von der Leyen is our weakest minister. That’s apparently enough to be head of the Commission’.

The awkward coalition politics forced Merkel to abstain on a vote among European leaders to put von der Leyen’s name forward as president.

Days later, von der Leyen scraped home by 383 votes to 327 in a confirmation vote in Strasbourg, having needed 374 for the required majority.

Taking office in July 2019, she touted her background as the daughter of a European official, saying that ‘I come from a family that has a European history’.

She also called for closer military co-operation in the EU after Brexit – accusing Britain of having ‘consistently blocked everything that had Europe written on it’.

But she distanced herself from comments in 2011 in which she had spoken openly of creating a ‘United States of Europe’ which would work like America.

As Commission president, she was Brussels’s most visible face – along with Michel Barnier – during the tense Brexit negotiations with Boris Johnson last year.

But her greatest test has come with the pandemic, and the vaccine race which much of Europe now blames her for bungling.