Turkey’s President Recep Tayyip Erdogan has said there is ‘no such thing as LGBT’ after activists clashed with police during a month-long protest at an Istanbul university.

‘The LGBT, there is no such thing,’ Erdoğan said during a televised address to his ruling Justice and Development Party (AK) on Wednesday.

‘This country is… moral, and it will walk to the future with these values.’

Last week, activists hung a poster showing the Kaaba in Mecca, Islam’s holiest site, draped in a rainbow flag, outside the office of an Erdogan-appointed rector.

Erdogan gave the university’s top spot to former political candidate Melih Bulu, which is seen as undemocratic by the college’s students and teachers. They are demanding his resignation. 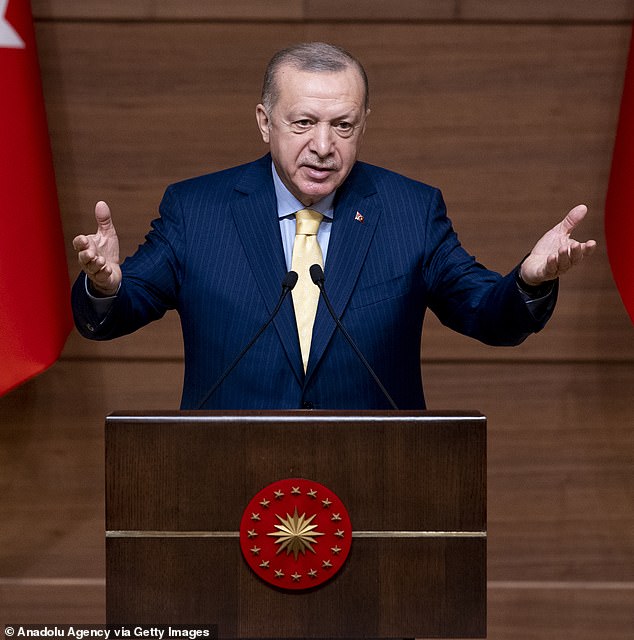 Erdogan called the protesters ‘terrorists’ during his speech, adding they will not be allowed to disrupt the country with their actions.

‘This country will not be run by terrorists. We will do whatever is needed to prevent this,’ Erdogan said, adding that the protesters lack Turkey’s ‘national and spiritual values’.

‘Are you students or terrorists trying to raid the rector’s room?’ he added. ‘This country will not again live a Gezi event in Taksim, will not allow it. We have not stood with terrorists and we will not.’

The unrest marks some of the largest demonstrations since 2013 when hundreds of thousands of people marched against government plans to build replica Ottoman barracks in Istanbul’s Gezi Park.

A violent eviction of a sit in protest, lead to 3.5million Turks taking to the streets in 5,000 rallies across the country.

Among their concerns were the erosion of the free press, expression, assembly and Erdogan’s Islamist government’s erosion of secularism.

Twenty-two people were killed and 8,000 injured during the demonstrations. 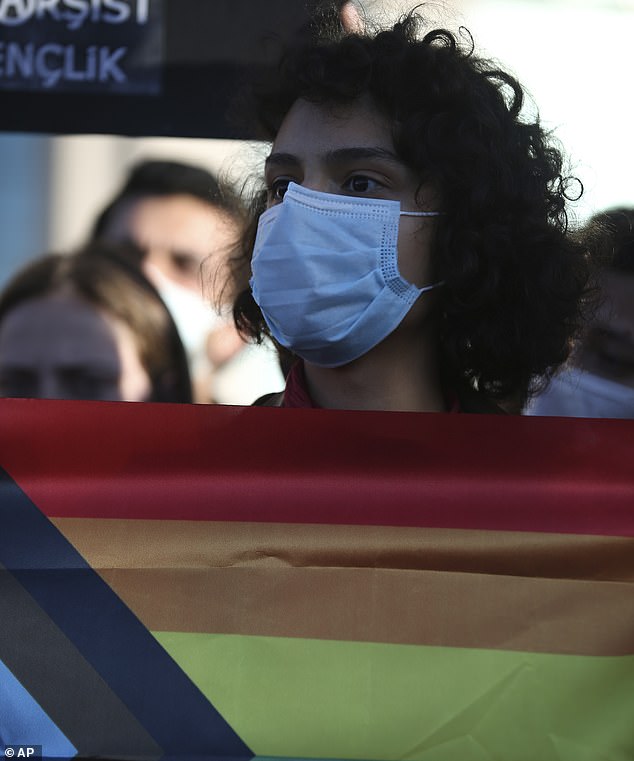 On Tuesday police launched tear gas and sprayed crowds of over 1,000 in Istanbul with rubber bullets.

Images from the scene showed protesters clashing with riot police and some with bloodied faces.

They are demanding the former AK party candidate resign, and the protests have spurred a nationwide debate over the ruling party’s reach, and led to separate protests in Ankara.

This week demonstrations turned violent, leading to clashes with police in the country’s two main cities, and the arrest of 300 students.

On Saturday Soylu wrote ‘four LGBT freaks’ were arrested for ‘inciting hatred’ with the poster of the Kaaba. 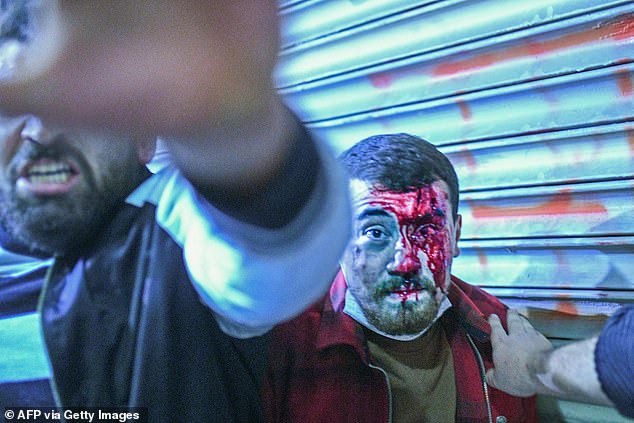 Price said, that freedom of expression, ‘even speech that some may find uncomfortable, is a critical component of vibrant functioning democracy.’

‘The United States….stands shoulder to shoulder with all those fighting for their fundamental democratic freedoms,’ he said.

Bulu, the protest’s focus, said he is ‘never thinking about resigning’.

Ankara Mayor Mansur Yavas urged Bulu in an open letter to ‘sacrifice’ his position instead of ‘academic peace, youth and our future’.

Bulu, who once applied to the AK Party to run for parliament, told broadcaster HaberTurk that the ‘crisis will be totally finished within six months.’

On Tuesday, academics again gathered on the Bogazici campus with their backs turned to the rector’s building in protest and chanted ‘Melih Bulu resign,’ carrying signs reading ‘159,’ the number of those detained on Monday. 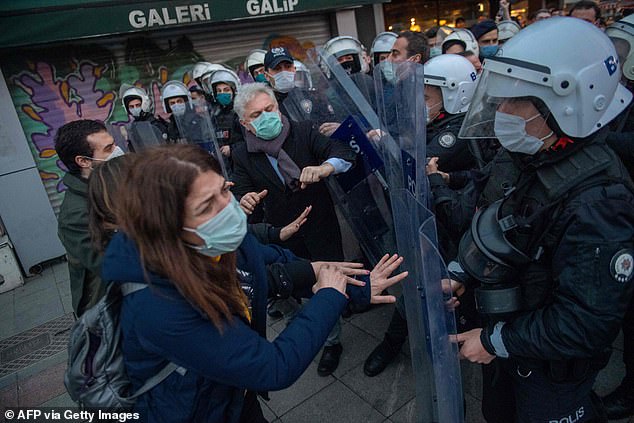 Protesters clash with riot officers during demonstrations in Istanbul on Tuesday

Furkan Dogramaci, 23, a Bogazici graduate last year, said a ‘lynching campaign’ against the LGBT community was launched to thwart the protest’s real aim.

The government response aimed at ‘dividing, separating us and ending this movement,’ he said.

University student Enes Gozukucuk, 23, who was among protestors on Monday when police detained 51 people, said the protests were against Bulu’s appointment not the government.

‘We could have solved these issues amongst ourselves in the school. There was no need for violence from government forces,’ he said.