President Donald Trump on Tuesday blasted out a conspiracy theory Tuesday claiming the 75-year-old man seen on video getting shoved to the ground by Buffalo police during a protest fell ‘harder than he was pushed’ and had connections to Antifa.

The tweet referenced a report on the right wing One America News Network with close-up, slowed footage of the incident while voice-over from a correspondent touts possible connections to Antifa, a group Trump has said wants to label as domestic terrorist organization.

The report claims that the incident – where 75-year-old protester Martin Gugino was shoved to the ground by police – ‘could be the result of a false flag provocation by far left group Antifa.’

It cites information that appeared on the Conservative Treehouse blog which identifies Gugino as a ‘well-known activist.’

Trump tweeted Tuesday morning: ‘Buffalo protester shoved by Police could be an ANTIFA provocateur. 75 year old Martin Gugino was pushed away after appearing to scan police communications in order to black out the equipment. @OANN.’ 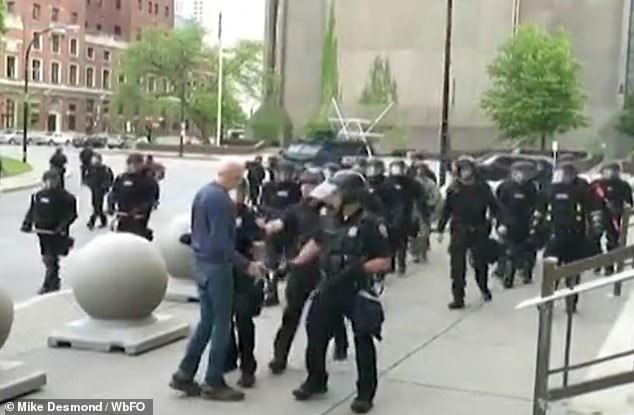 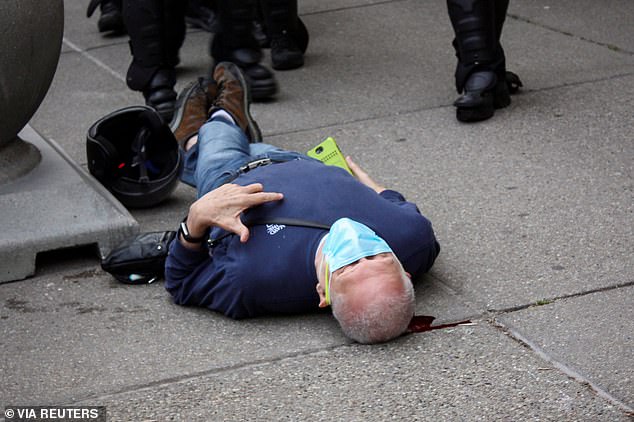 Martin Gugino, a longtime peace activist from Amherst, had been at a protest at Niagara Square near Buffalo City Hall when he was pushed. He hit his head on the ground causing it to bleed

The president added that he agreed with at least part of what was put forward by the broadcast on a network he regularly touts. ‘I watched, he fell harder than was pushed. Was aiming scanner. Could be a set up?’ Trump asked.

The OANN correspondent identifies himself as Kristian Rouz, who has been revealed to simultaneously be working for Kremlin-backed Sputnik news. The Daily Beast previously reported that Rouz was born in Siberia, graduated from Novosibirsk State University, and moved to the U.S. in 2017.

Gugino remains hospitalized in Buffalo, according to his attorney.

‘He is in serious but stable condition. Martin has acknowledged and sincerely appreciates the tremendous outpouring of support he has received nationwide. Martin and his family continue to request privacy as they focus on Martin’s health and recovery,’ lawyer Kelly Zarcone said, WGRZ reported.

Zarcone told CNN Tuesday: ‘No one from law enforcement has ever even suggested anything otherwise so we’re at a loss to understand why the president of the United States would make such a dark, dangerous and untrue accusation against him. Martin has always been a peaceful protester because he cares about today’s society.’

Two police officers who shoved him last week in an incident captured on dramatic video have pleaded not guilty to assault. Video of the incident shows Gugino bleeding on the pavement as a group of officers walk by.

Aaron Torgalski and Robert McCabe were charged with assault in the second degree Saturday morning. 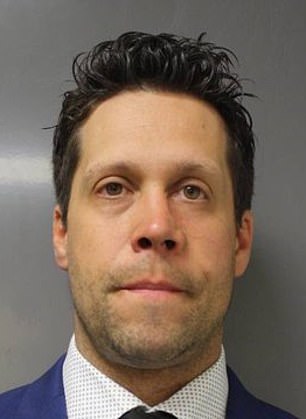 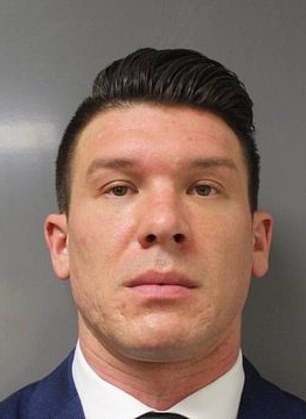 Aaron Torgalski (left) and Robert McCabe (right) pictured in their mugs. They were each charged with one count of assault in the second degree in a court hearing Saturday morning over the shocking incident that left peaceful protester Martin Gugino in a ‘serious condition’ in hospital 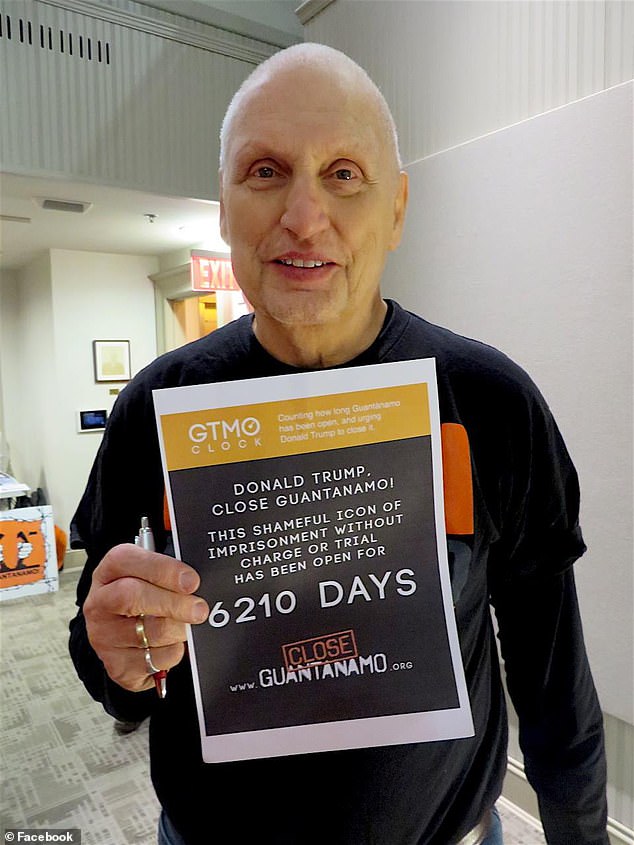 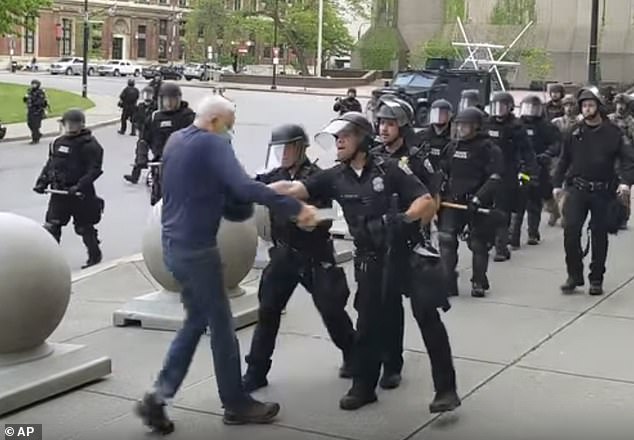 In this image from video provided by WBFO, a Buffalo police officer appears to shove a man who walked up to police Thursday, June 4, 2020, in Buffalo, N.Y. Video from WBFO shows the man appearing to hit his head on the pavement, with blood leaking out as officers walk past to clear Niagara Square. Buffalo police initially said in a statement that a person “was injured when he tripped & fell,” WIVB-TV reported, but Capt. Jeff Rinaldo later told the TV station that an internal affairs investigation was opened 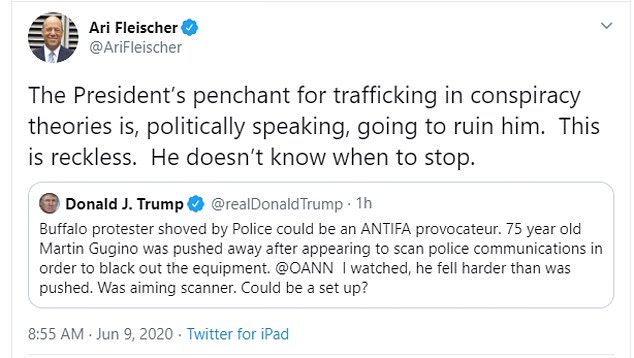 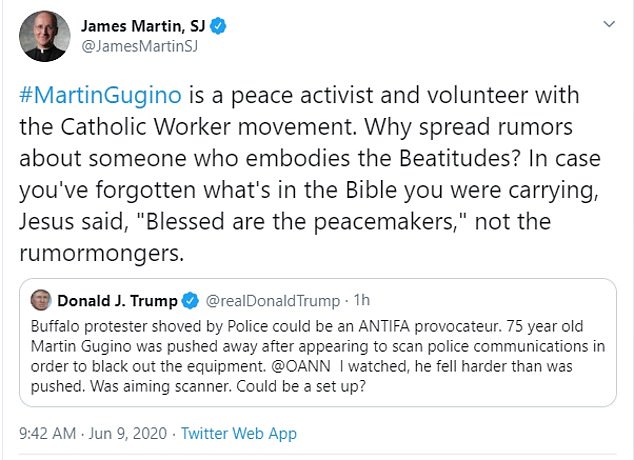 Buffalo Mayor Byron Brown said Gugino was an ‘agitator’ who tried to work up the crowd and had been asked to leave the area ‘numerous’ times.

The OANN report zeroed in on footage of the man waving his phone while coming in close contact with members of a Buffalo police unit during the protest.

All 57 officers on the Buffalo Police Department’s Emergency Response Team resigned from the squad on Friday in support of their colleagues who were suspended over the incident.

The report Trump tweeted says video ‘appear to show Gugino  using a police tracker on his phone trying to scan police communications during the protest.’ It describes it as an ‘old trick used by Antifa’ to locate police officers and plan violent activities’ and was ‘supposedly using the communication to black out police technologies.’