Trump leads Biden in North Carolina by 1.2% with 94% of the votes counted – but election officials say the results will not be known for another WEEK

President Donald Trump has declared victory in North Carolina – but election officials in the state said on Wednesday they did not expect vote totals reported by the state to change for more than a week.

State officials have been processing some 5.5 million ballots, but there are 117,000 outstanding mail-in ballots – many of which may not have been cast – and an undetermined number of provisional ballots still in the mix.

Trump currently holds a 1.2 percent lead over Joe Biden in the state with 94 per cent of the votes tallied.

A final result may not be known until next week at the latest given North Carolina is accepting mail-in ballots through November 12 – as long as they are postmarked by November 3.

Your browser does not support iframes.

Your browser does not support iframes.

‘With very few exceptions, North Carolina’s election results will not change until Nov. 12 or 13, when all mail-in ballots are received and counted by each county,’ Karen Brinson Bell, executive director of the state Board of Elections, told a news conference

So far, Biden is outperforming Trump when it comes to mail ballots.

Of the mail-in ballots, some of those voters could have voted in person on Election Day or not voted at all.

There are 15 electoral votes at stake in North Carolina.

Election results were partly delayed across the state on Tuesday night after the North Carolina State Board of Elections voted Tuesday to keep 10 polling places open beyond their initially scheduled closure because they opened late or had technical difficulties.

The extensions ranged between 17 and 45 minutes and matched the extra time it took to get them open.

The delays were at least partly due to issues with printers or other electronic equipment.

Trump, who is locked in a tight battle with Biden to secure the 270 electoral votes needed to win the presidency, prematurely claimed in the early hours of Wednesday that he had won the state. 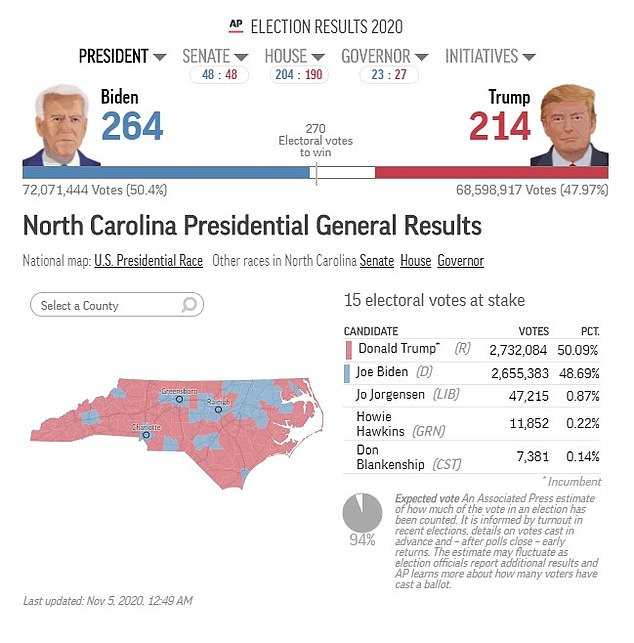 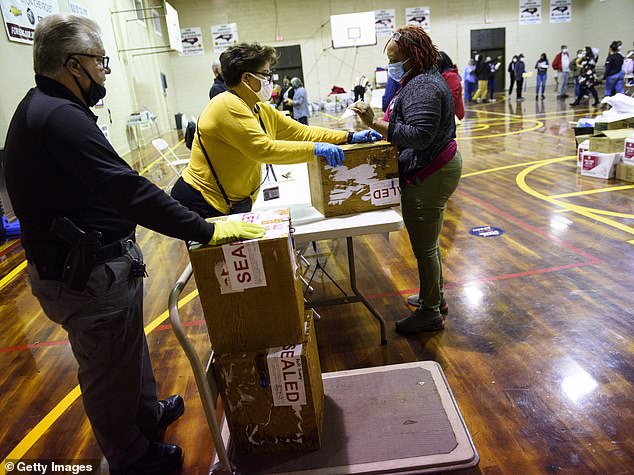 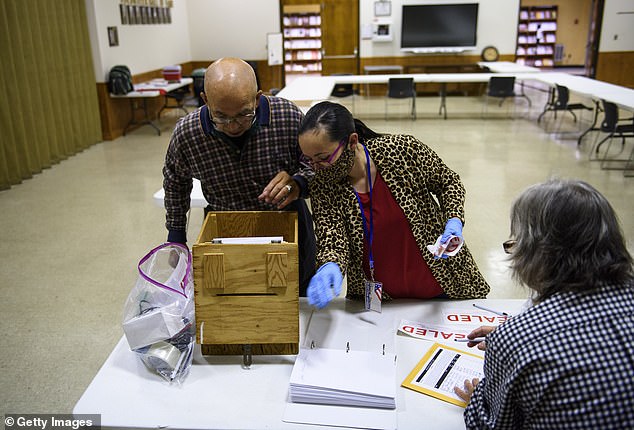 Volunteers verify the contents of a ballot box at the O.P. Owens Agricultural Center before bringing the information to across the Robeson County Board of Elections in Lumberton, North Carolina on Tuesday night

‘We’ve clearly won North Carolina, where we’re up 1.7 percent, 77,000 votes with only approximately 5 percent left. They can’t catch us,’ he said during an appearance at the White House.

Trump also said he planned to contest the US presidential election before the Supreme Court.

It was unclear, exactly, what legal action he might pursue.

At midday on Wednesday he took to Twitter to vent his frustration, writing: ‘They are finding Biden votes all over the place — in Pennsylvania, Wisconsin, and Michigan. So bad for our Country!’

He added: ‘They are working hard to make up 500,000 vote advantage in Pennsylvania disappear — ASAP. Likewise, Michigan and others!’

Biden campaigned heavily in North Carolina but Trump is still leading due to support in rural and suburban counties.

Biden is trying to become the first Democratic presidential candidate to win the state since Barack Obama in 2008.

The key presidential battleground also has a hotly contested US Senate race.

In the Senate race, Republican Senator Thom Tillis declared victory on Tuesday evening, but Democrat Cal Cunningham has not conceded. Tillis’ lead of 48.7% to 46.9% is considered too slim to call the race.