NSW has reported 390 new local cases, the highest daily COVID-19 case total since the beginning of the coronavirus pandemic.

Premier Gladys Berejiklian anticipates the trend of higher case numbers “will continue for at least the next few days”. 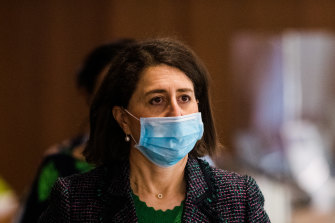 There were also two deaths recorded in the 24 hours to 8pm last night:

NSW Premier Gladys Berejiklian said Canterbury-Bankstown still has the highest number of cases of the local government areas but there has been stabilisation.

Blacktown and Mount Druitt remain areas of concern, she said. There were 25 new cases recorded in Dubbo and five in the Hunter region.

There were no new cases in Tamworth, Armidale and the Northern Rivers regions but Ms Berejiklian said those parts of regional NSW are “not out of the woods” yet given there are exposure sites in those areas.

On Friday NSW Health issued an alert to Year 12 students who attended Qudos Bank Arena for vaccination on Tuesday afternoon to be tested and isolate after someone who was at the vaccination hub tested positive.

In a message sent to students, authorities advised anyone who was at the hub between 2.40pm and 4.20pm on Tuesday to “get tested for COVID-19 as soon as possible and self-isolate until you receive a negative result.”

As cases continue to be detected in some parts of regional NSW, lockdown in the Hunter and New England regions has been extended by another week.

There are currently five confirmed cases in Dubbo and one in Walgett, with non-elective surgery postponed at the Base Hospital until August 16.

Deputy Premier John Barilaro flagged the possibility of a statewide lockdown and said “tougher” public health orders were being drafted.

The ACT entered seven-day lockdown from yesterday afternoon, with anyone in NSW who has been in the area since Thursday 5 August asked to stay at home and only leave their residence with a reasonable excuse, NSW Health said on Thursday night.

NSW Police Commissioner Mick Fuller is set to tighten rules around the COVID-19 singles bubble and people exercising as part of renewed push to slow the spread of the Delta strain as it slowly engulfs the state.

NSW Health has identified new venues of concern in Sydney’s west and inner west, Dubbo, Walgett and Byron Bay related to COVID-19 cases. Anyone at the below locations or buses in the relevant times is considered a close contact and must get tested and isolate for 14 days, regardless of the result.

Victoria recorded in the 24 hours to Friday with four of the cases still under investigation.