Toilet roll sales have gone through the roof on Amazon in the first two weeks of March following panic buying as concerns over coronavirus grow.

Sales for a specific 27-pack of 1,000-sheet toilet paper were up 944% compared to the same period in 2019, according to Guru Hariharan, CEO of CommerceIQ which helps brands sell on Amazon.

Meanwhile sales of many packaged goods, including cereal, aspirin, and batteries, more than doubled compared to a year ago. 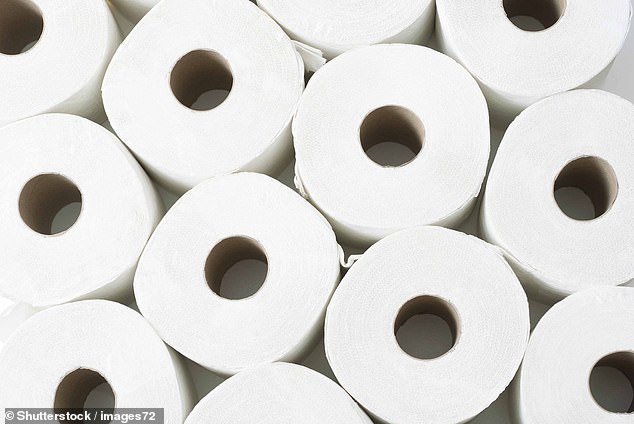 However, according to Amazon workers, demand has surged but staffing in some locations is down as much as half as some workers have also been staying home to avoid infection.

This surge in demand has prompted Amazon to make plans to hire 100,000 more staff, according to BuzzFeed.

But there are also fears that the response could create an internal public health problem as people are urged to practise social distancing.

Amazon’s surge in sales comes as online food deliveries in the UK are booked in to April as supermarkets warn they cannot ‘feed the nation’ alone and encourage families to help those in self-isolation.

It comes as elderly and vulnerable customers found yesterday that they could have to wait up to April for food and essentials because delivery slots have already been filled up until then. 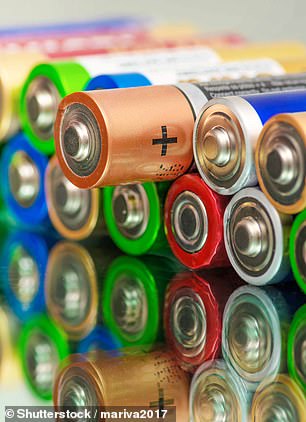 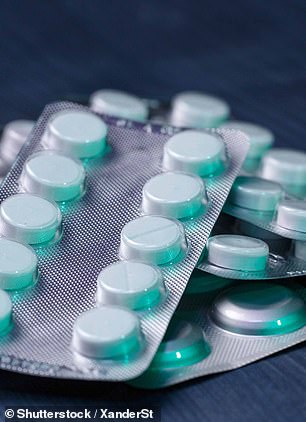 Meanwhile sales of many packaged goods, including cereal, aspirin, and batteries, more than doubled compared to a year ago 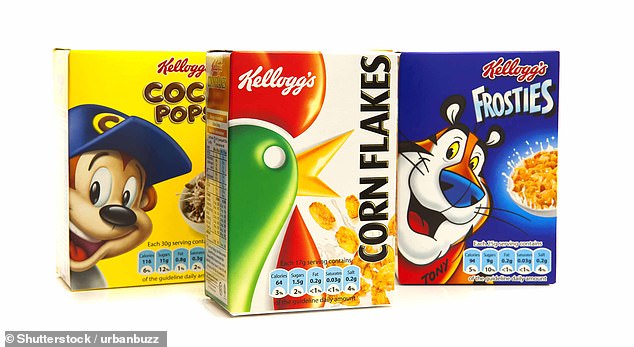 Demand for cereals bought through Amazon has soared 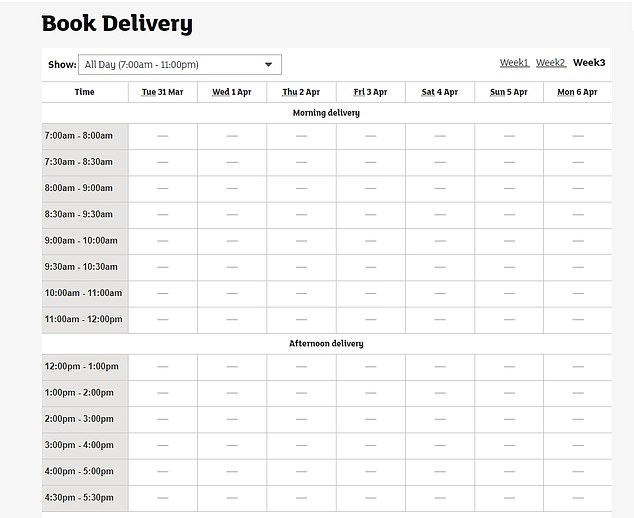 Online food deliveries are booked up for weeks as supermarkets warn they cannot ‘feed the nation’ alone and encourage families to help those in self-isolation. Pictured: A screenshot of Sainsbury’s unavailable delivery slots

As of Tuesday, Sainsbury’s have no delivery slots available before Monday April 6, with Morrisons only a few slots left on April 5. Asda doesn’t have slots available until Sunday March 29.

Shoppers logging on to Ocado on Tuesday morning were told they had an hour’s wait.

Senior industry leaders told The Telegraph that UK stores would ‘never have enough’ resources to reach every self-isolated person in Britain and encouraged people to help the vulnerable with their shopping.

It comes as the Nationwide Building Society and several supermarkets offer opening times for elderly shoppers only, in an attempt to stem the coronavirus crisis.

Yet, the government has now advised over-70s to self-isolate for three months and as such they will be unable to take advantage of the ‘silver hour’. 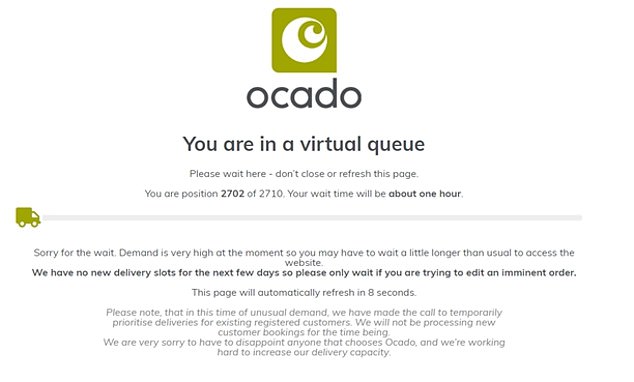 Online supermarket Ocado’s customers were left in an hour-long queue this morning. Pictured: A screenshot of the website

A senior industry source told the publication: ‘The reality is that neighbours and community groups will have to step in to deliver food. There’s no other way of doing it.

‘We’re confident we’ll have enough supplies, but getting them to the right people is an entirely different matter.’

Another source urged customers not to use desired delivery slots if they were physically able to shop in person.

Elisabeth Bennett, a wheelchairbound carer for her 95-year-old father, said yesterday that her next Sainsbury’s order would arrive mid-April at the earliest. 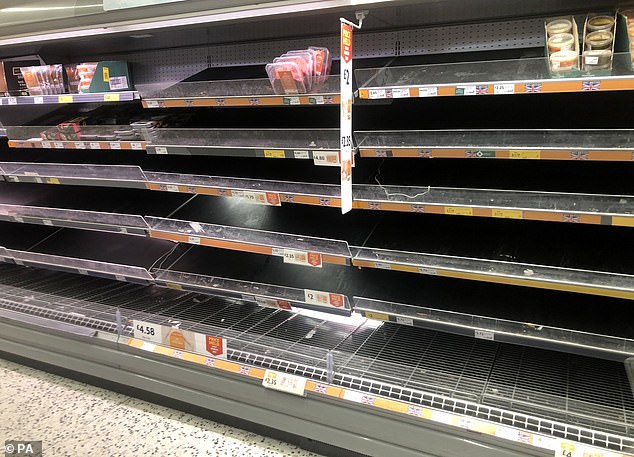 Empty shelves at a Morrisons supermarket in Whitley Bay, Northumberland, as panic buying continues across the UK

‘We are told not to stockpile, that there will be more supplies, then they cut us out,’ she said. ‘Normally, you can get a slot the next day, so three weeks or more is a huge problem.’

It comes after a chaotic weekend for supermarkets, which saw their shelves emptied of essential items such as toilet rolls, cleaning products, dried pasta and tinned food, after the virus outbreak was classified as a pandemic.

Supermarkets have urged customers not to panic buy to ensure everyone is adequately supplied.

The British Retail Consortium (BRC) said staff have been the victims of abuse in recent days, but retailers are working with the police to keep stores ‘running as smoothly as possible’.

Andrew Opie, director of food and sustainability at the BRC, said: ‘Even when circumstances are difficult, retailers are well versed in providing effective security measures.’ 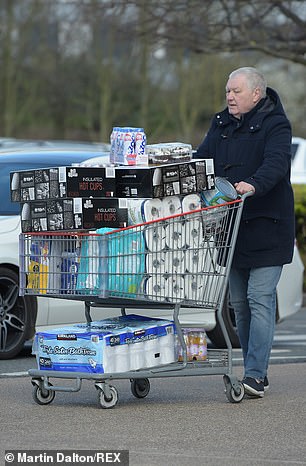 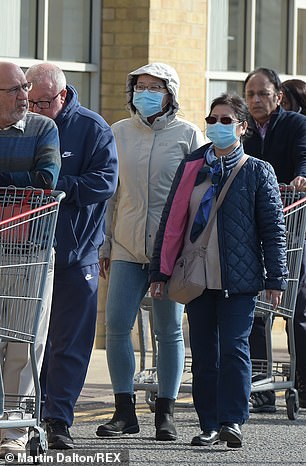 A man (pictured left) leaves the Costco in Lakeside, West Thurrock, Essex, with plenty of toilet roll, while other customers (right) queue up outside the store 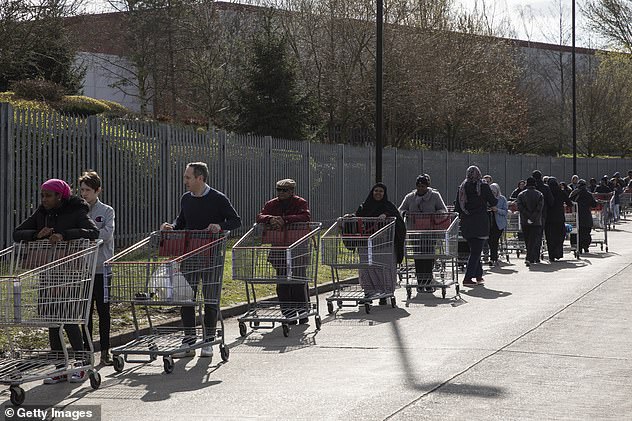 Worried shoppers form long queues ahead of the opening of a Costco wholesale store in Chingford, today in London

Sainsbury’s – which has a five-product limit on certain items – emailed millions of its customers to urge them not to stockpile and insisting there were enough supplies of food and essential items for ‘everyone’.

Chief executive Mike Coupe wrote: ‘There are gaps on shelves because of increased demand, but we have new stock arriving regularly and we’re doing our best to keep shelves stocked.’

He continued to urge families to stop hoarding products and added: ‘Please think before you buy and only buy what you and your family need.’

Meanwhile, Nationwide Building Society is also trialling new branch opening times during the coronavirus outbreak so that elderly and vulnerable people can manage their money in a safe environment within a dedicated hour each morning.

From Wednesday March 18, more than 100 branches across the UK will open from 8am, instead of the usual 9am, for people aged 70 and above and those with underlying health conditions.

Elsewhere, Lidl announced dedicated shopping hours for older customers and those more vulnerable, with all stores boasting prioritised queuing from 9 to 11am every day.

On Sunday, an Iceland store in Belfast announced it would reserve an hour each morning for only elderly customers.

Iceland told MailOnline that they are allowing their stores to make their own decisions on how best to meet the needs of their local communities, but can’t confirm plans for specific branches at the moment.

The reserved shopping time at the Kennedy Centre store, West Belfast, is set to start on Tuesday, and has received largely positive support online.

Supermarkets are also limiting the amount of essentials per person to help combat panic buying.