Nairobi: Seven months after they were dislodged by Ethiopia’s military, the former leaders of the country’s Tigray region claim to have regained control over the regional capital, marking what could be a significant – and unexpected – turning point in a deadly civil war.

In a statement, the Tigray People’s Liberation Front said Mekele was under its “complete control” again. It said it anticipated retaliation from the government and called on the city’s residents to rally behind the group.

The Ethiopian government of Prime Minister Abiy Ahmed unilaterally declared an immediate ceasefire earlier, claiming that it would last until the end of Tigray’s planting season in September. 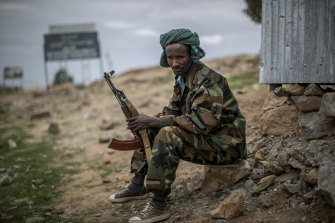 A fighter loyal to the Tigray People’s Liberation Front mans a guard post on the outskirts of the town of Hawzen, then-controlled by the group, in the Tigray region of northern Ethiopia in May.Credit:AP

“An unconditional, unilateral ceasefire has been declared starting from today, June 28,” read a statement published by state media.

An official in Tigray’s Addis Ababa-appointed interim government, speaking on the condition of anonymity to discuss the situation, said celebrations broke out after the announcement of regained control on Monday (Tuesday AEST).

He added that the interim government’s top leadership had all left Mekele.

A ceasefire had long been sought by humanitarian groups and Western governments. Tigrayan officials did not immediately or publicly respond to the cease-fire announcement.

The United Nations and humanitarian organisations have warned that nearly 1 million people could be facing famine conditions. Fighting, as well as alleged incidents of outright theft of humanitarian vehicles and cargo by combatants, have severely hindered aid delivery. On Saturday three Doctors Without Borders workers were murdered in an ambush in the region, their bodies dumped near their vehicle.

The Ethiopian government and Tigrayan forces traded blame for that attack.

UN Secretary General Antonio Guterres said that he had spoken with Abiy and was “hopeful an effective cessation of hostilities will take place.” 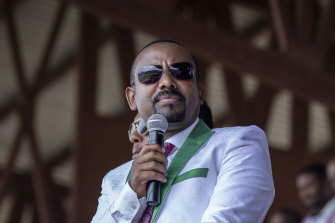 Ethiopian Prime Minister Abiy Ahmed speaks at a final campaign rally in the town of Jimma, Oromia, ahead of national elections earlier this month.Credit:AP

Last week, an Ethiopian air strike hit a bustling market in a town near Mekele, killing at least 60, according to the interim government official. The country’s military claimed that all the dead were rebel fighters, despite numerous reports of children being among the casualties.

On Monday, Ethiopian soldiers allegedly entered the offices of UNICEF in Mekele and dismantled a satellite communication device, according to the organisation’s top official. Agence France-Presse cited witness reports from Mekele of federal soldiers and police raiding banks and commandeering vehicles belonging to private citizens while fleeing the city ahead of the rebel advance.

Ethiopian troops have fought alongside ethnic militias and neighbouring Eritrea’s military. Tigray’s western portion, which also borders Sudan, has been under administration for months by officials from Ethiopia’s Amhara region.

While Abiy had claimed at the outset of the conflict in November that it would be brief and that Tigray’s rebellious leadership would be eliminated with surgical precision, it long ago became clear that a protracted battle for the region was unfolding. Tigray’s rebel leaders ran Ethiopia for decades as part of the regime that preceded Abiy’s.

Large-scale atrocities have accompanied the fighting, including allegations of door-to-door killings and rapes by Eritrean troops, massacres carried out by both Tigrayan and Amhara militias, and scores of extrajudicial killings by Ethiopian troops.

The Tigrayan militia, known as the Tigray Defence Forces, had been gaining momentum in moving back toward Mekele in recent weeks, according to UN security reports.

Tigray’s interim government leaders, who are ethnic Tigrayans but appointed by the federal government, quietly left the city last week, telling colleagues it was related to recently concluded voting in national elections – even though no voting took place in Tigray.

“A lot of young people, merchants, farmers have joined the TDF,” said the interim government official. “They feel that they are fighting for survival. They will fight forever, that’s for sure. It is now irreconcilable.”