Thousands across the globe have joined forces to pay homage to the the selfless healthcare workers across the world on International Nurses Day.

The annual event saw people across the world, including members of the British royal family, offer their tributes to the frontlines nurses helping fight the coronavirus pandemic grappling the countries across the globe.

The day also marked the 200th anniversary of the birth of the trailblazing nurse Florence Nightingale, who came to prominence during the Crimean War and went on to became the founder of modern medicine.

The moving scenes today, which come days after the NHS asked members of the public to ‘shine a light’ to mark the international event, saw people lighting candles inside their homes in honour of the frontline staff helping fight the pandemic.

In London, an image of Florence Nightingale, who was born in Florence, Italy, was projected on the Houses of Parliament in Westminster, while St Thomas’ Hospital, where Prime Minister Boris spent several days in the ICU last month with Covid-19, also lit its walls with the famous nurse alongside the words: ‘Nightingale’s 200th birthday’. 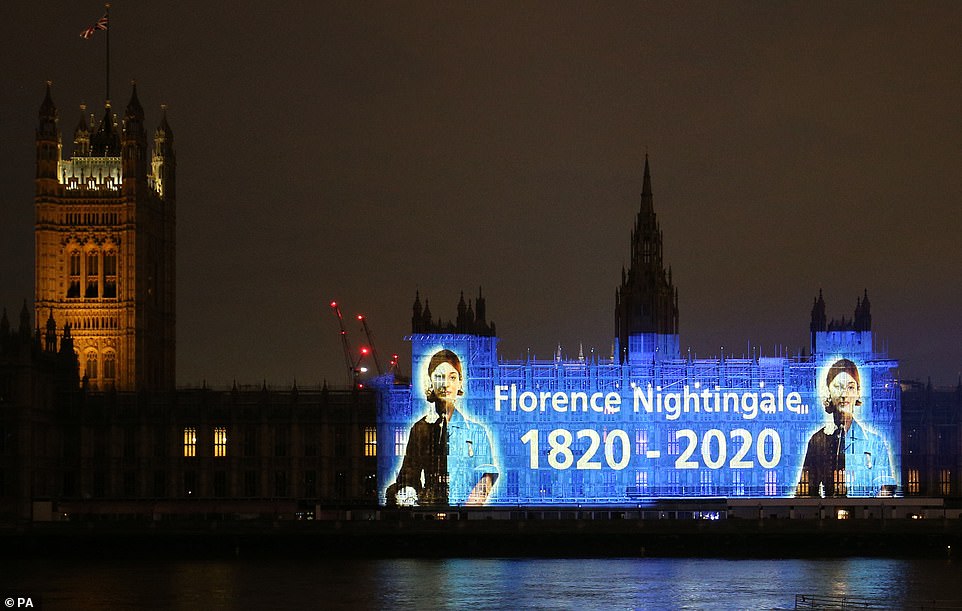 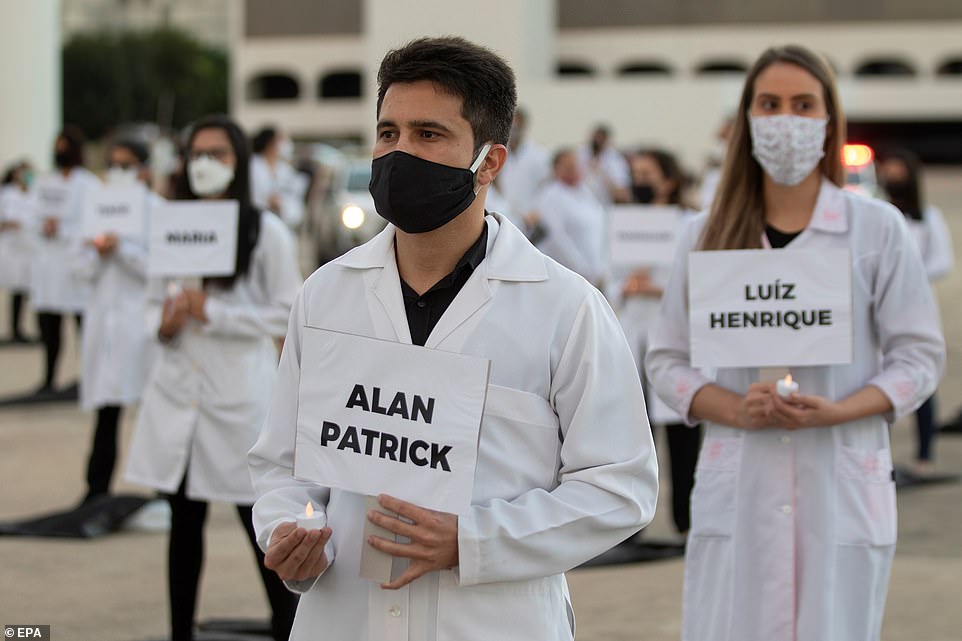 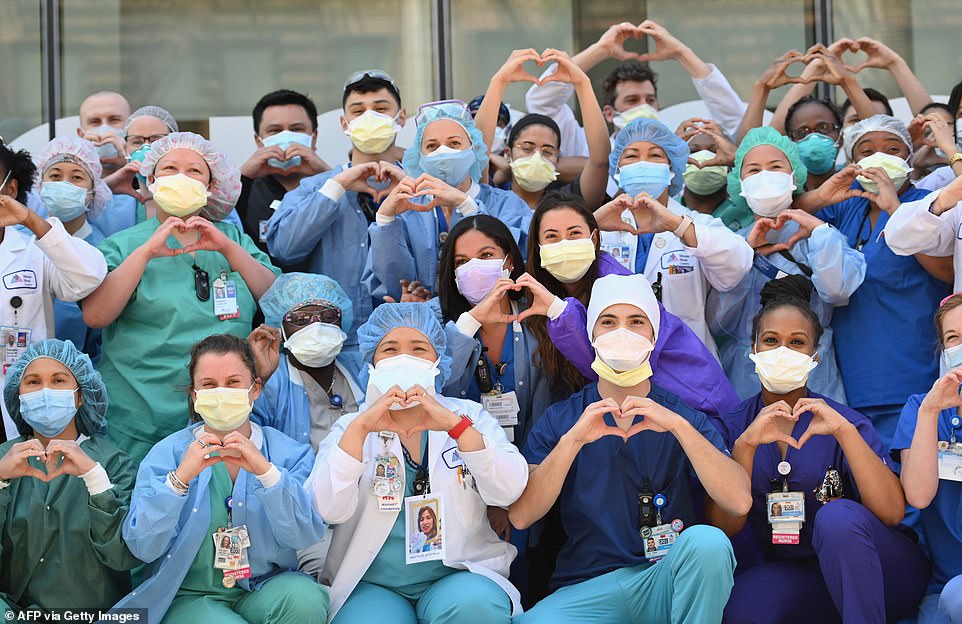 Healthcare workers at Mt. Sinai, Oueens, New York City, pose for a group photo and make heart gesture hearts in celebration of Nurse Week and International Nurses Day on May 12 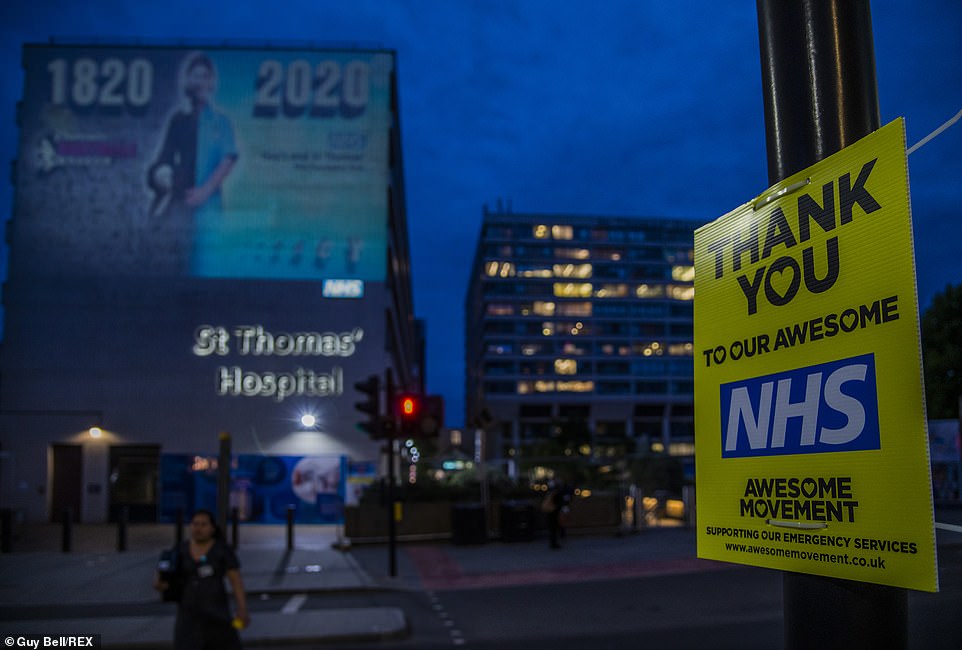 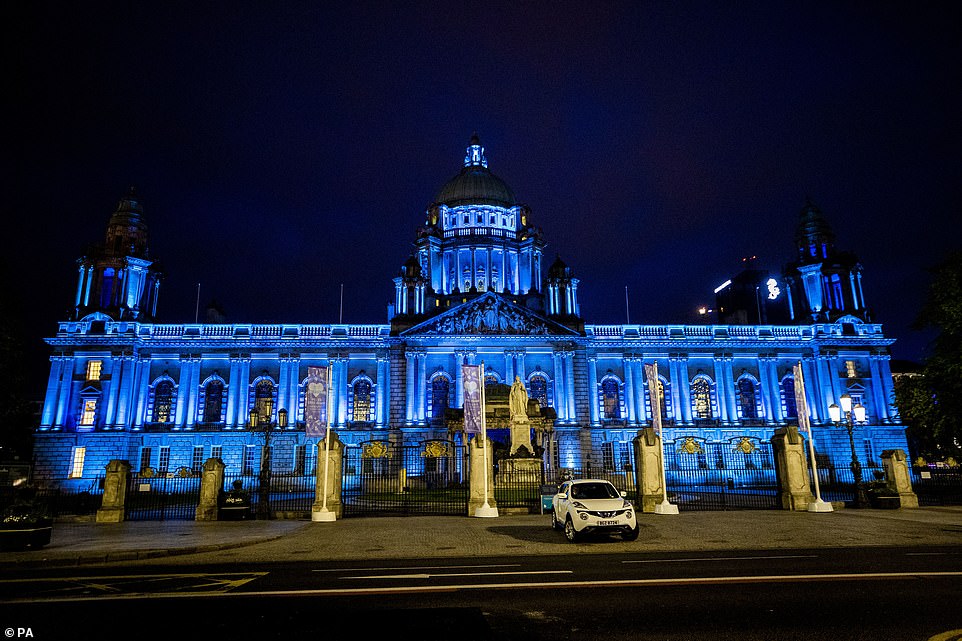 In Northern Ireland, Belfast City Hall was illuminated in blue to pay tribute to the nurses risking their lives on the frontline in the fight against the pandemic 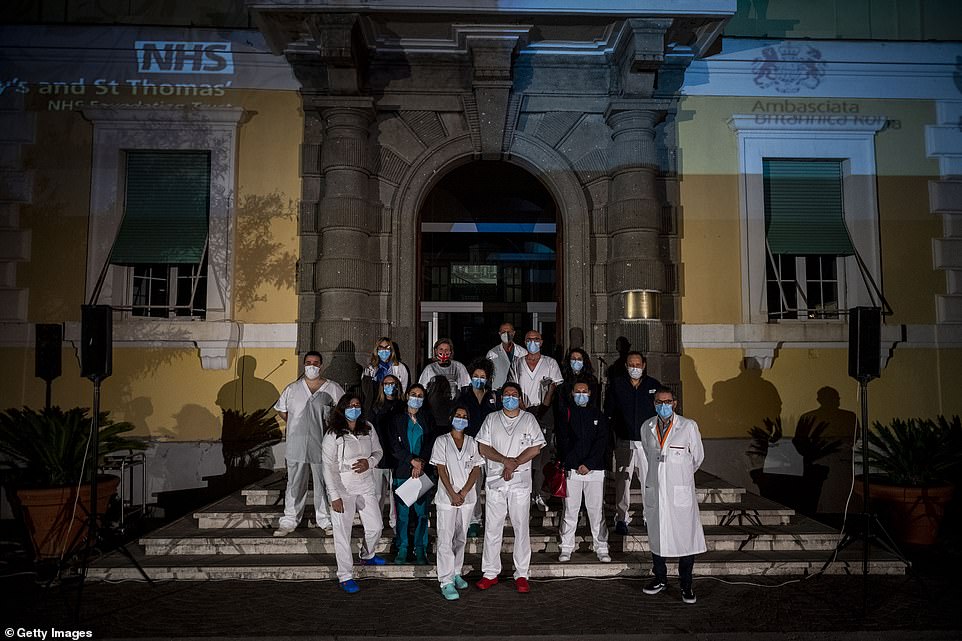 In Rome, Italy, healthcare workers stood outside to thank their fellow colleagues who were helping fight the coronavirus crisis

While in Northern Ireland, Belfast City Hall was lit blue in honour of the brave nurses who were helping fight the spread of the coronavirus.

Meanwhile in Italy, which was the first country to impose a nationwide lockdown, nurses took part in event that thanked healthcare workers across the country.

The country, which now has fewer than 1,000 patients in intensive care units, is now setting out steps to edge out of lockdown and enter ‘phase two’ of the lockdown.

In Brazil, nurses wearing white lab coats lay on the ground to pay tribute to their colleagues who had lost their lives while trying to fight the virus.

Earlier today the Speaker of the House of Commons gave his thanks to the ‘healthcare workers putting their own lives at risk to treat patients with Covid-19’.

Sir Lindsay Hoyle said: ‘It is an honour to have her image projected on to Parliament as part of our national appreciation for the NHS and everyone who works for it.’

His sentiments were echoed by the Health Secretary who said he learnt about the profession from his grandmother who was a nurse. 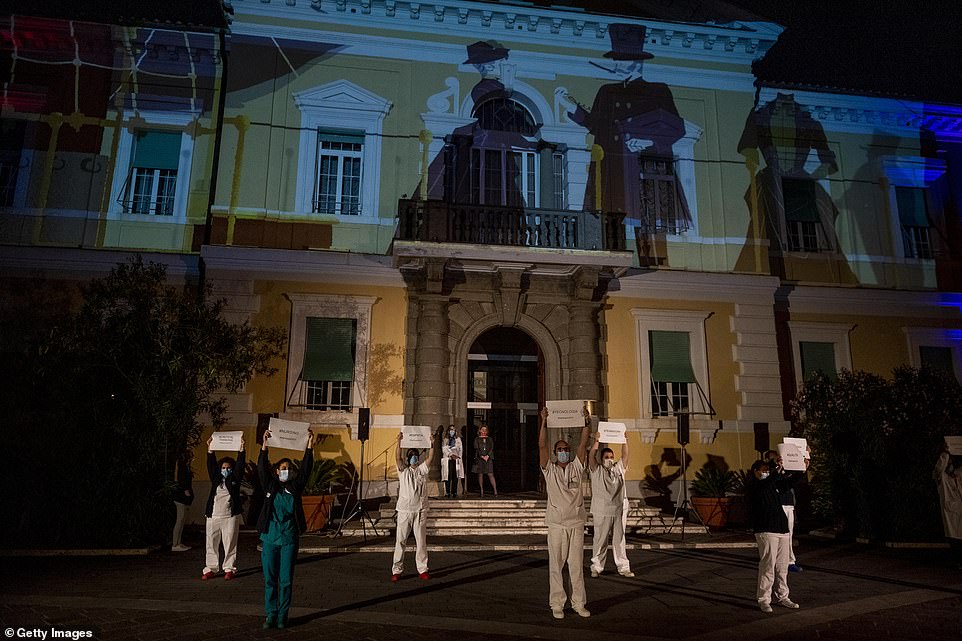 Nurses and healthcare workers  in Italy, which imposed a nation-wide lockdown in March, thanked frontline staff helping fight the crisis 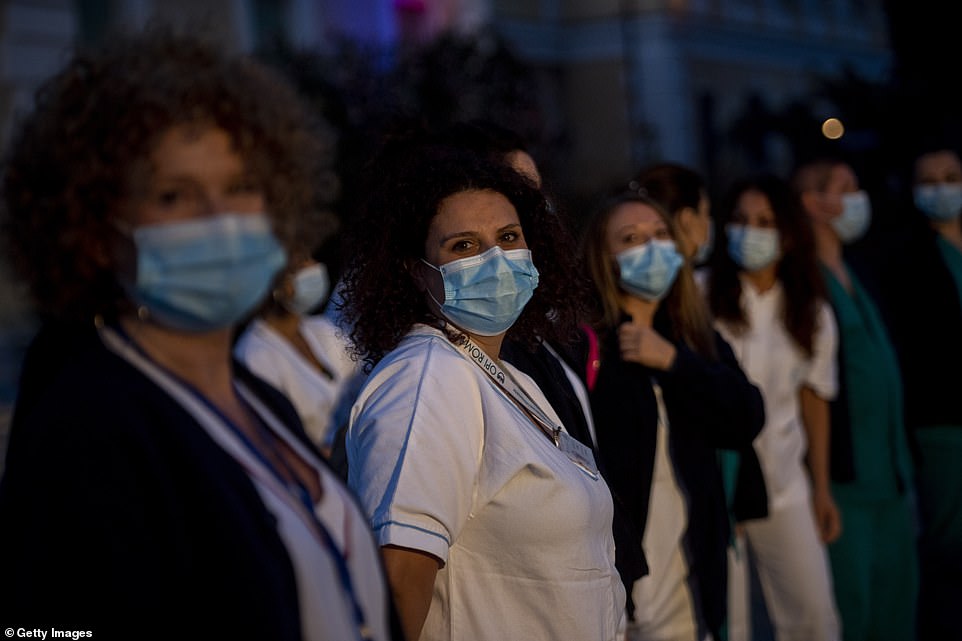 In Rome, Italy, nurses wear their face masks as they join forces for International Nurses Day and pay tribute to those who have los their lives 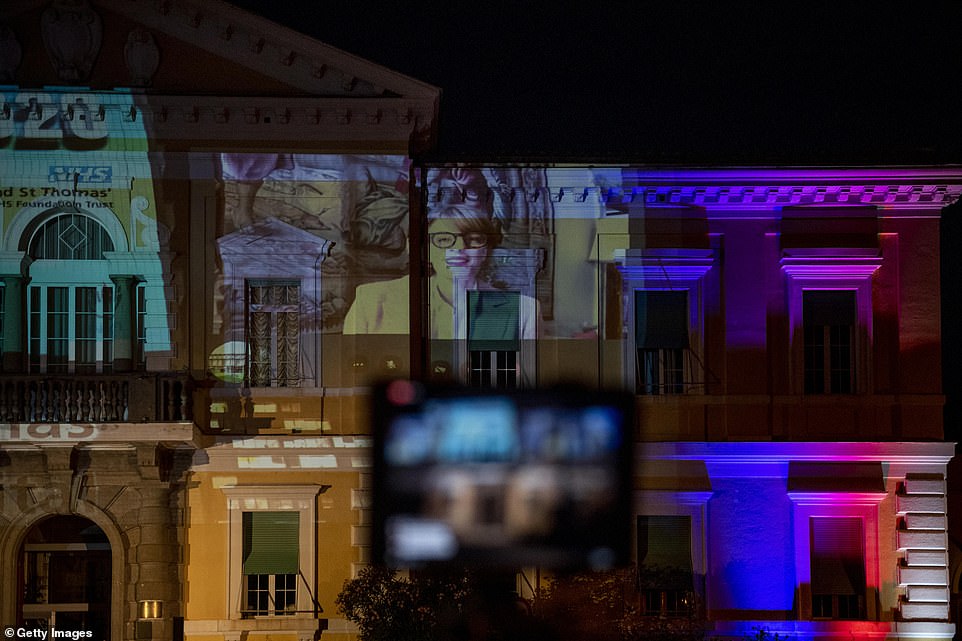 Jill Morris, British ambassador to Italy, spoke to healthcare workers in Italy as the country joined others around the world to mark the annual event 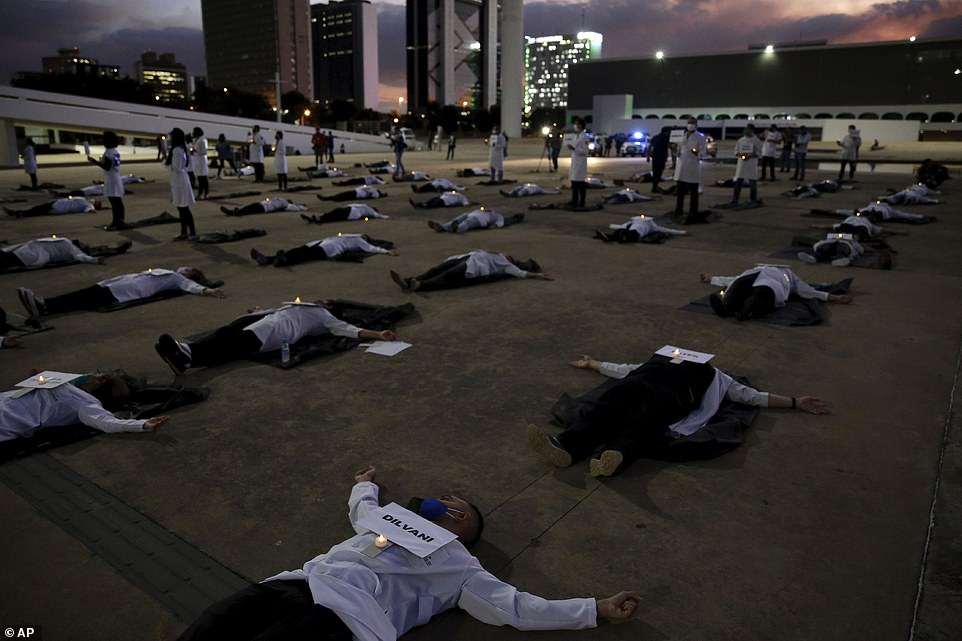 In Brazil, nurses in lab coats lay on the ground with lamps and the names of those who had lost their lives to the virus on them 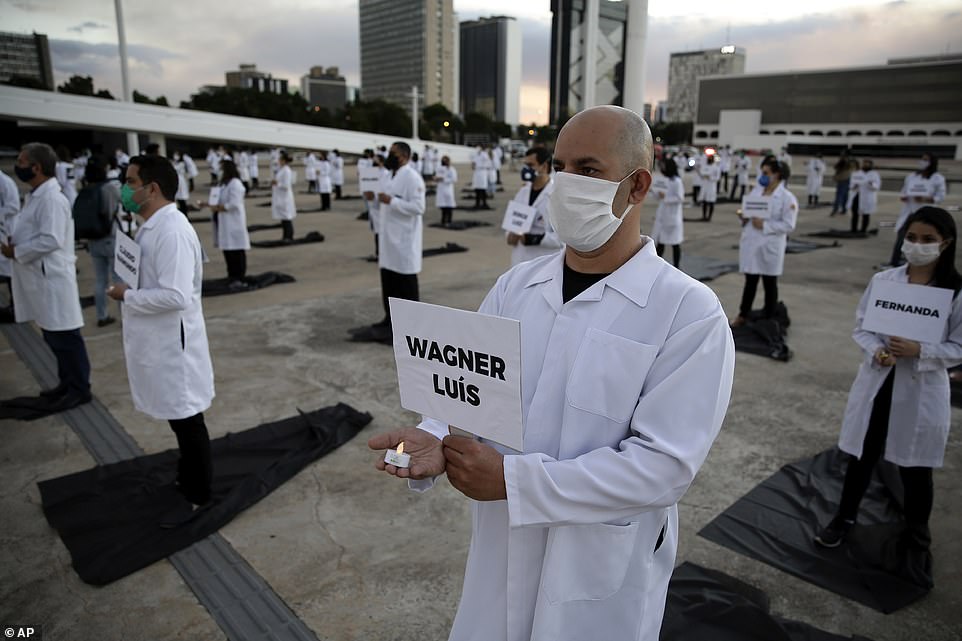 In a video posted on Twitter, Matt Hancock said: ‘Most of all I want to say thank you to all the nurses that we have in the NHS right across the UK for the work that you’re doing which is so compassionate, so hard, and so rewarding.’

Earlier on Tuesday, one hospital trust marked the anniversary by naming all of its nurses ‘nurse of the year’.

Gail Byrne, chief nursing officer at University Hospital Southampton, called nursing staff ‘all superheroes’ and said in a letter to staff: ‘We would normally be holding our nurses’ day celebrations and awards today, which we will do this at some point, but my chief nursing officer ‘nurse of the year’ award this year goes to all of you.’

Meanwhile members of the British royals family also joined forces in paying tribute to healthcare workers across the world.

In a video clip released on the Kensington Royal Instagram page today, the Queen could, 94, could be heard speaking with Professor Kathleen McCourt, the President of the Commonwealth Nurses and Midwives Federation and Fellow of the Royal College of Nursing, of which The Queen is Patron.

The royal called it ‘a rather important day’, saying: ‘Obviously nurses have had a very important part to play recently.’

The short audio clip of the Queen on the phone to Professor McCourt was followed by members of the royal family including Prince Charles, 71, Camilla, 72, Prince William, 37, and Princess Anne, 61, offering their thanks to nurses across the world.

Kate Middleton, 38, and the Countess of Wessex, 55, joined together to speak to nurses in seven different commonwealth countries, including Australia, India, Malawi, Sierra Leone, Bahamas, Cyprus and the UK.

While Prince Charles, who is currently isolating in Birkhall, Aberdeenshire, having recently recovered from coronavirus, provided a message for the video thanking nurses across the world. 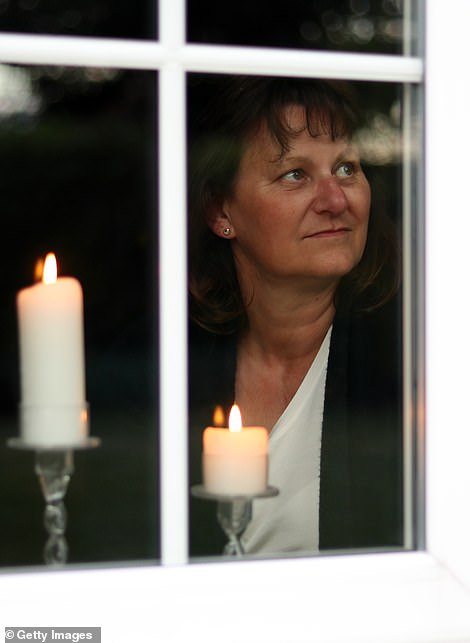 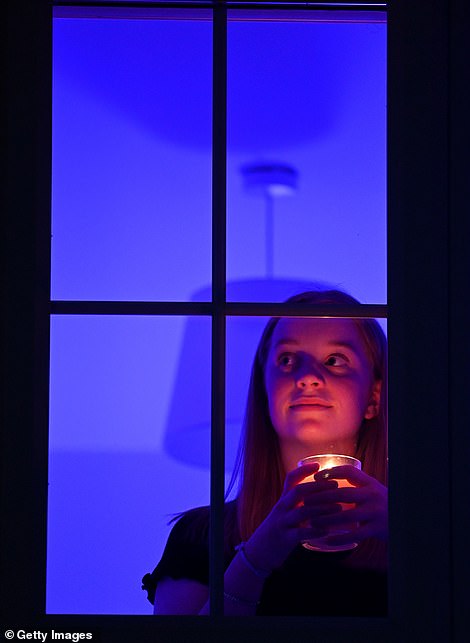 One woman was seen sitting by her window in Southampton, England, with candles by her window to celebrate the 200th birthday of Florence Nightingale on May 12 while in Brixworth, a young girl was seen holding a candle in her bedroom 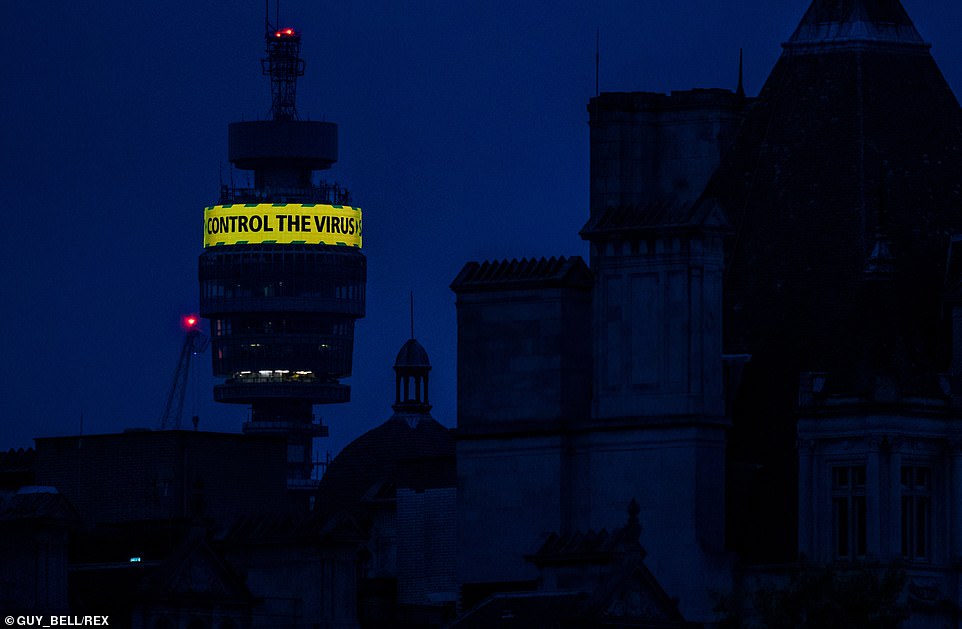 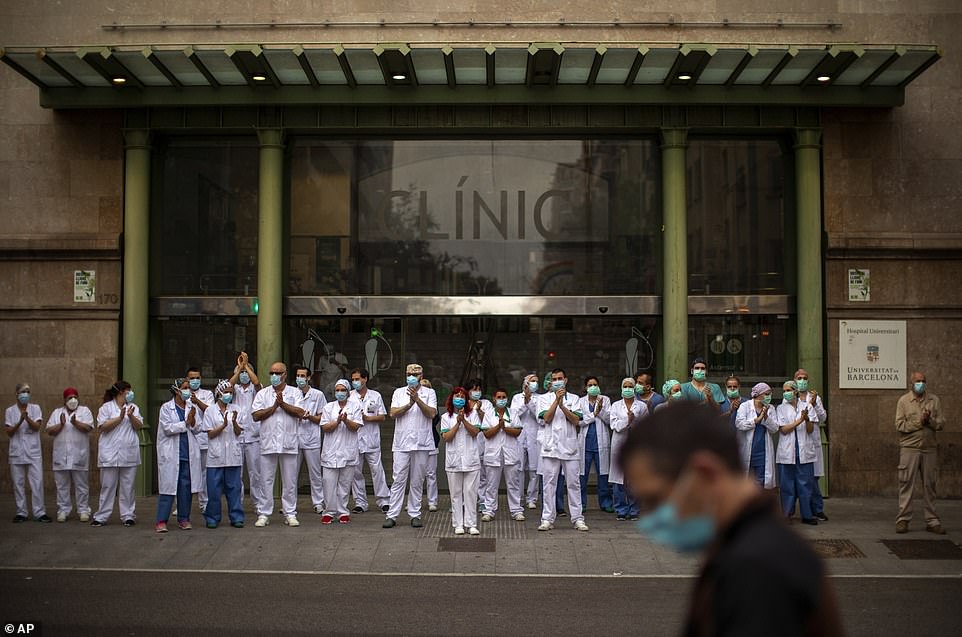 Healthcare workers stand stand in the street and applaud their fellow colleagues on International Nurses Day in Barcelona, Spain 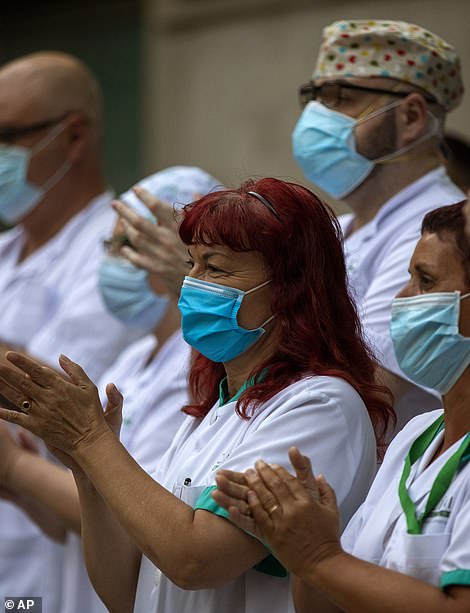 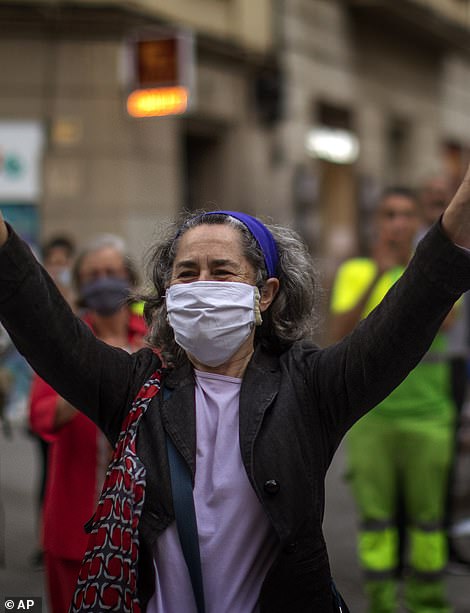 In Barcelona, Spain, healthcare workers (left) and members of the public (right) applaud the vital work being carries out by frontline staff 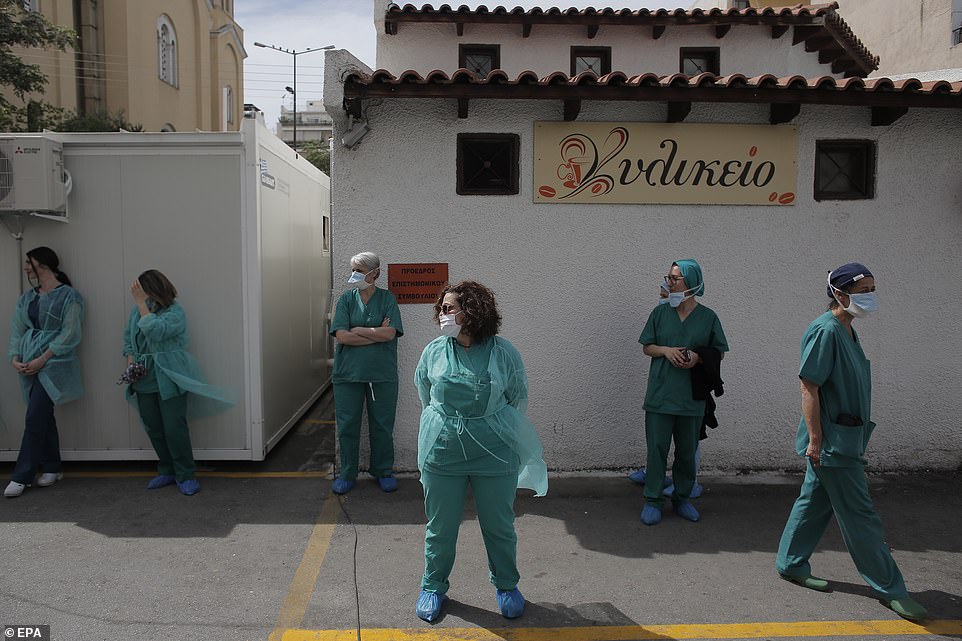 Meanwhile in  Athens, Greece, nurses and medical stuff at the hospital Metaxa  commemorate those helping fight the International Nurses Day 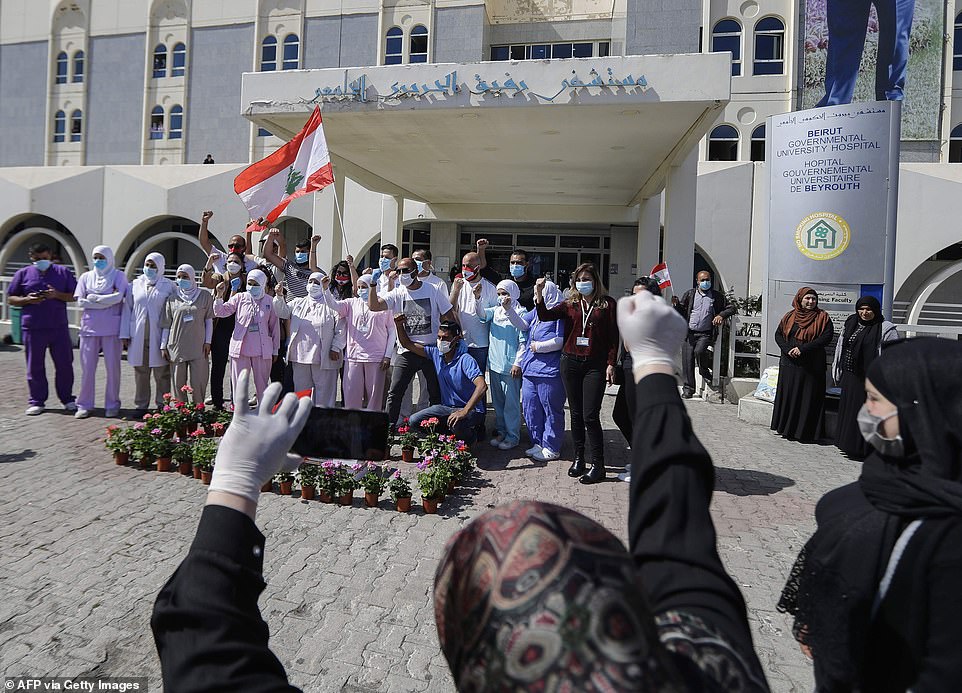 In Lebanon, nurses pose for a group photo outside the Rafik Hariri public hospital in  Beirut, in celebration of International Nurses Day 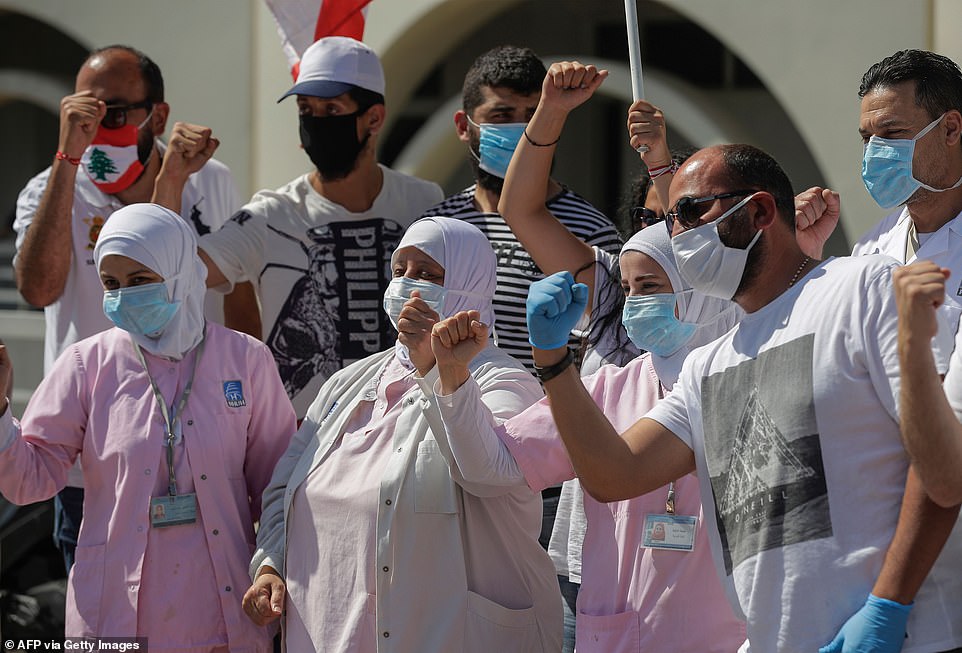 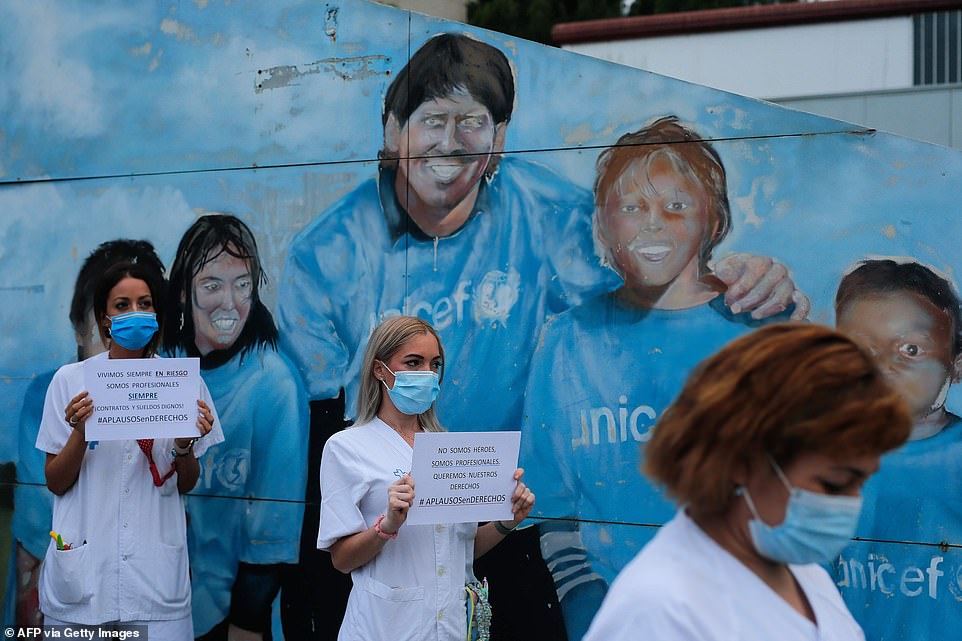 Healthcare workers stand with signs reading ‘We are not heroes, we are professionals, we want our rights’ in Barcelona

The moving scenes come as the NHS continues to fight the coronavirus crisis which has now claimed the lives of 32,692 across the nation.

Ruth May, chief nursing officer for England, said: ‘International Day of the Nurse is particularly special this year not just because we mark the 200th anniversary of Florence Nightingale’s birth, but because of the extraordinary work all those who have followed in her footsteps are doing in the fight against coronavirus.

‘I want to thank each and every one of our incredible nurses who are on the frontline in the battle against the greatest health emergency in NHS history. Their professionalism and skills are helping to save and rebuild countless lives.

‘It is a challenging but hugely rewarding career and I would urge anyone inspired by their example to sign up to join us and become a nurse.

‘I know how much the public’s support has buoyed my colleagues during this testing time. It would mean a great deal if people once again showed their gratitude by shining a light for nurses this Tuesday.’

Professor Greta Westwood, CEO of Florence Nightingale Foundation said: ‘Nurses have been on the frontline of the Covid-19 pandemic, providing expert care and support to patients and their families during these uncertain times.

‘Florence Nightingale, herself a trailblazer during her career, would have been proud at the way nurses have followed in her footsteps as pioneers and leaders in the fight against the pandemic. They are truly her legacy today.’

Andrea Sutcliffe CBE, Chief Executive and Registrar at the Nursing and Midwifery Council (NMC) said: ‘International Nurses Day is more important than ever as we recognise the enormous contribution existing and former professionals are making in caring for people through some of the most challenging moments of their lives during the Covid-19 pandemic.

‘2020, the International Year of the Nurse and Midwife, is shining a light on the dedication, skills and expertise of everyone on the NMC register in ways we hadn’t expected. They are the beating heart of our health and social care system, trusted and appreciated by the public and deserving of our admiration and respect.

‘I am so grateful and proud of our nurses, nursing associates and their colleagues. I hope this special day encourages even more nurses to join or return to what is a wonderful and rewarding career.’ 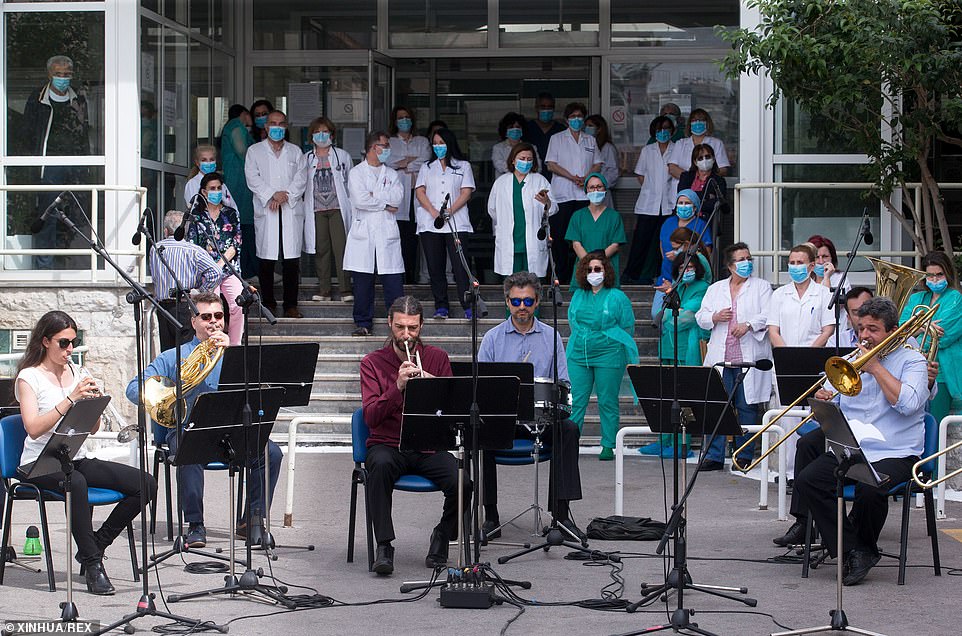 A group of musicians  perform for medical workers at Metaxa hospital in Athens, Greece, on International Nurses Day 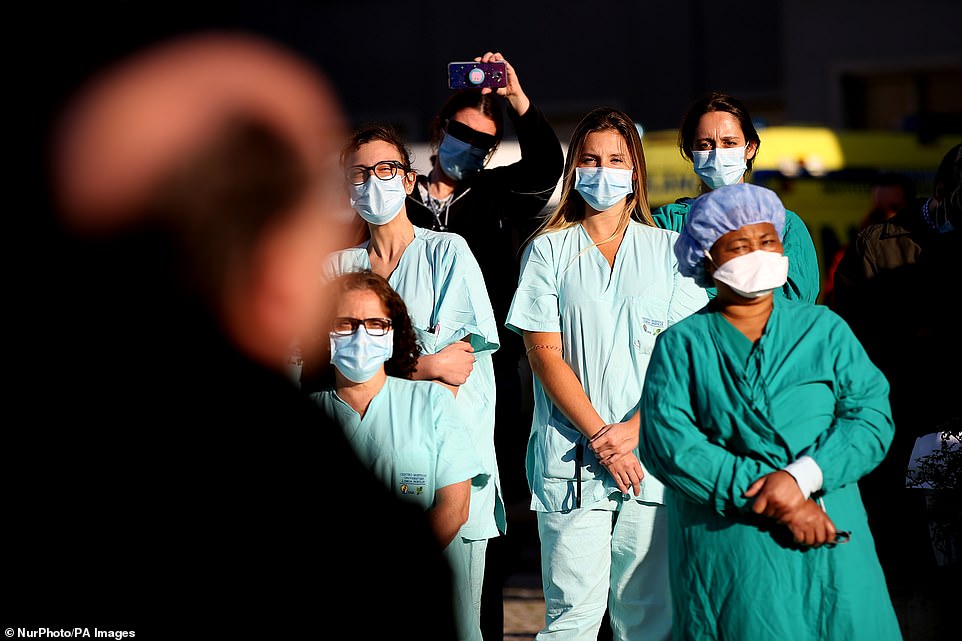 Nurses watch as they are serenade by a music group at Santa Maria Hospital in Lisbon, Portugal on International Nurses Day amid the coronavirus pandemic 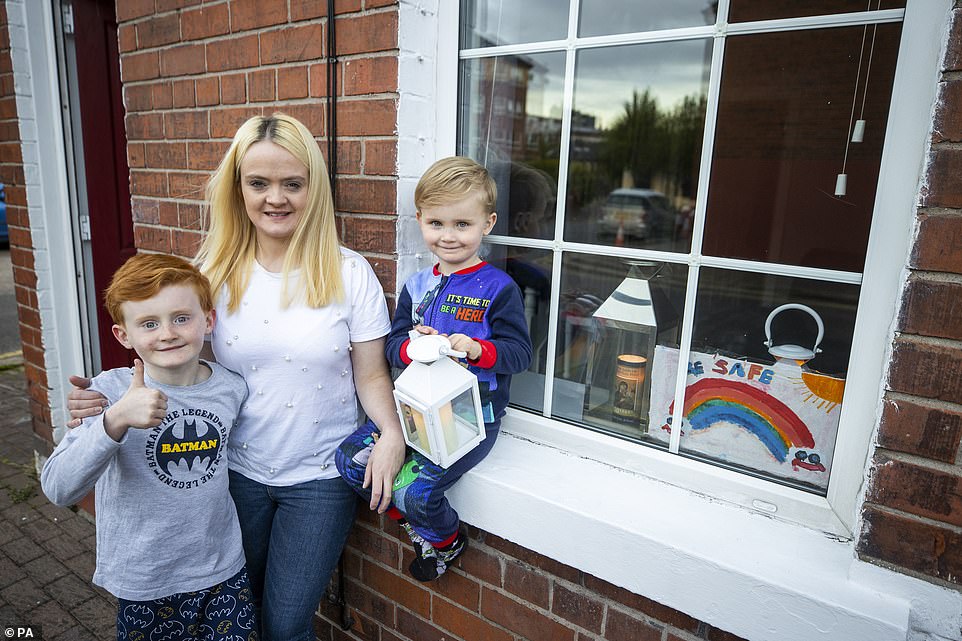 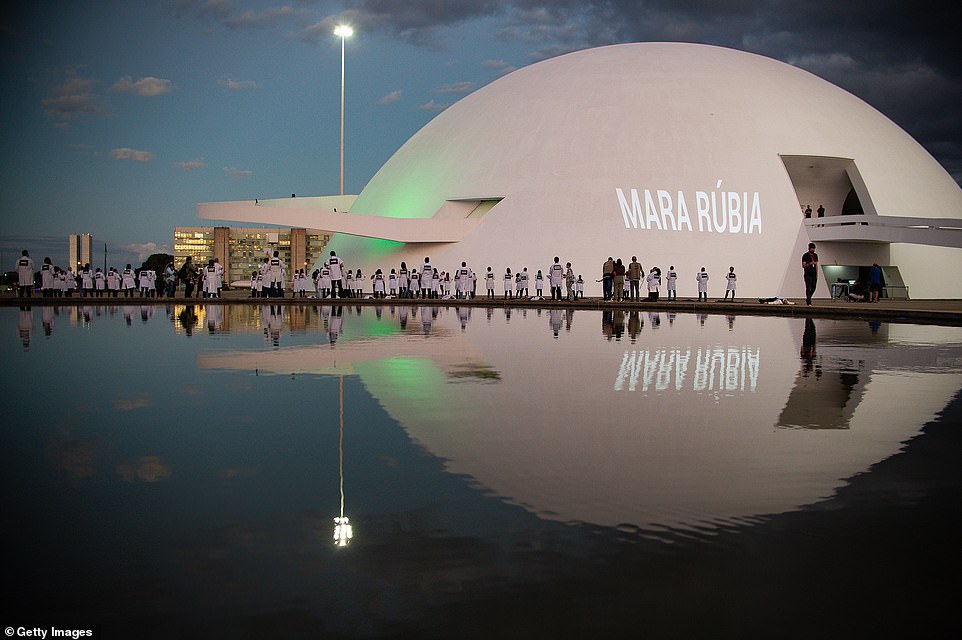 In Brazil, healthcare workers stood outside opay tribute to the 84 nurses who had died in the country while trying to control the spread of the virus 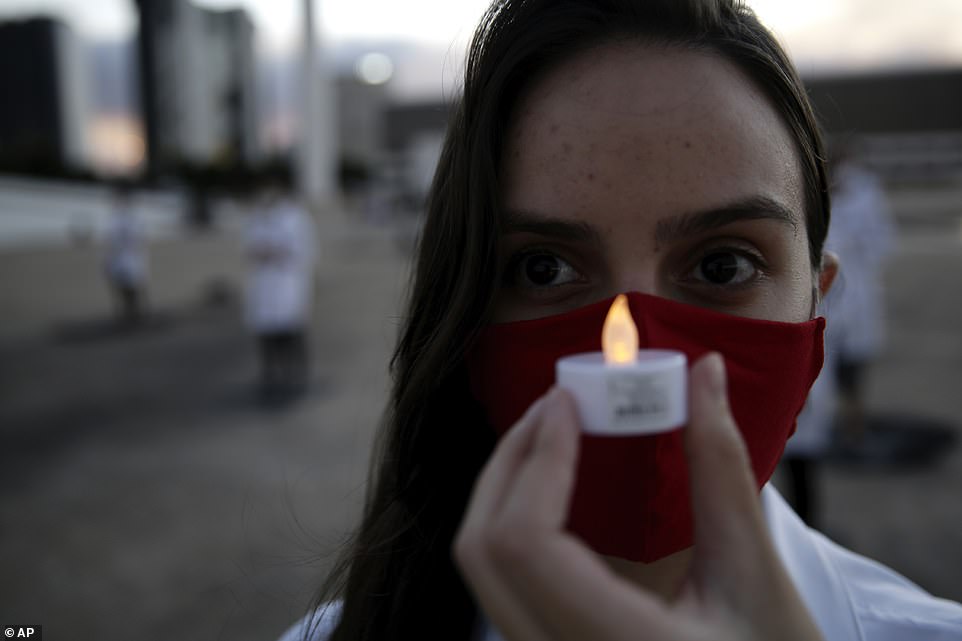 A nurse holds an artificial candle in tribute to her colleagues who have died while trying to fight the coronavirus pandemic, during a protest marking International Nurses Day in  Brazil 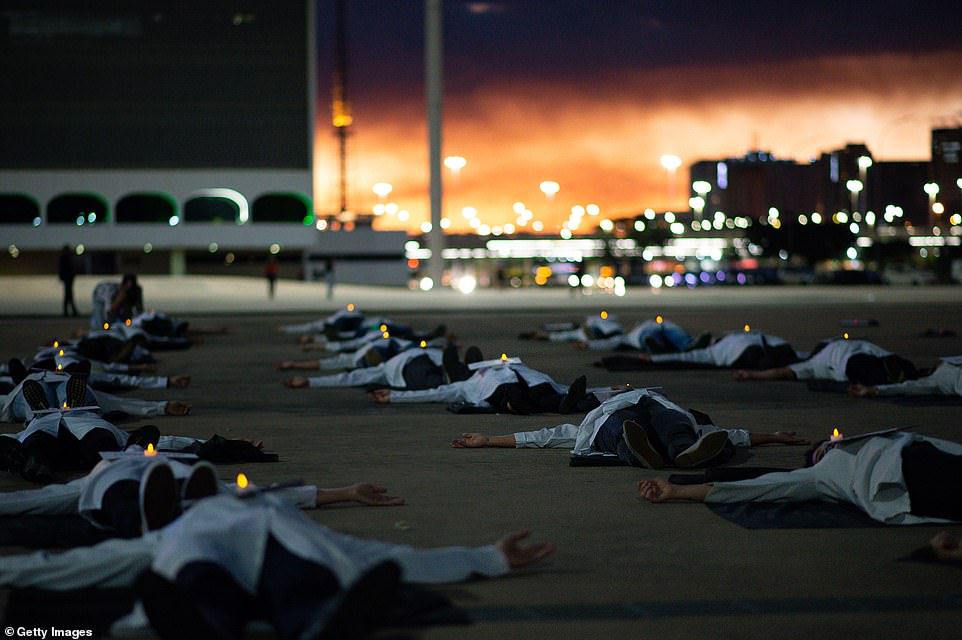 In Brazil, nurses in lab coats and masks lay on the back with artificial candles during a protest marking International Nurses Day 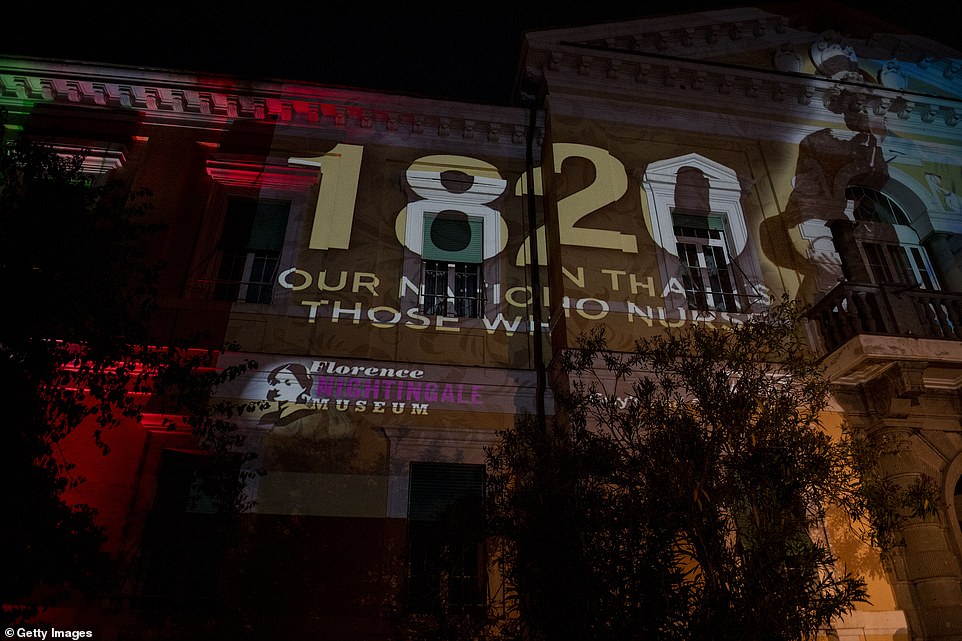 At the Florence Nightingale museum in Brazil, an image of the famous nurse, who was the founded of modern medicine, is projected on the building 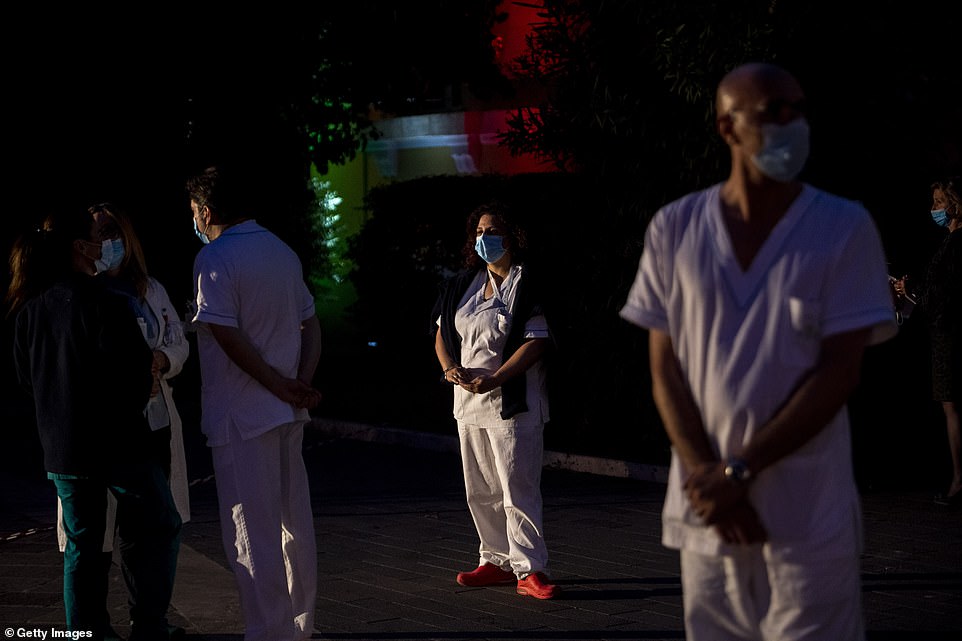 Nurses stand on the streets and mark International Nurses Day today, at the INMI Spallanzani Hospital, in Rome, Italy 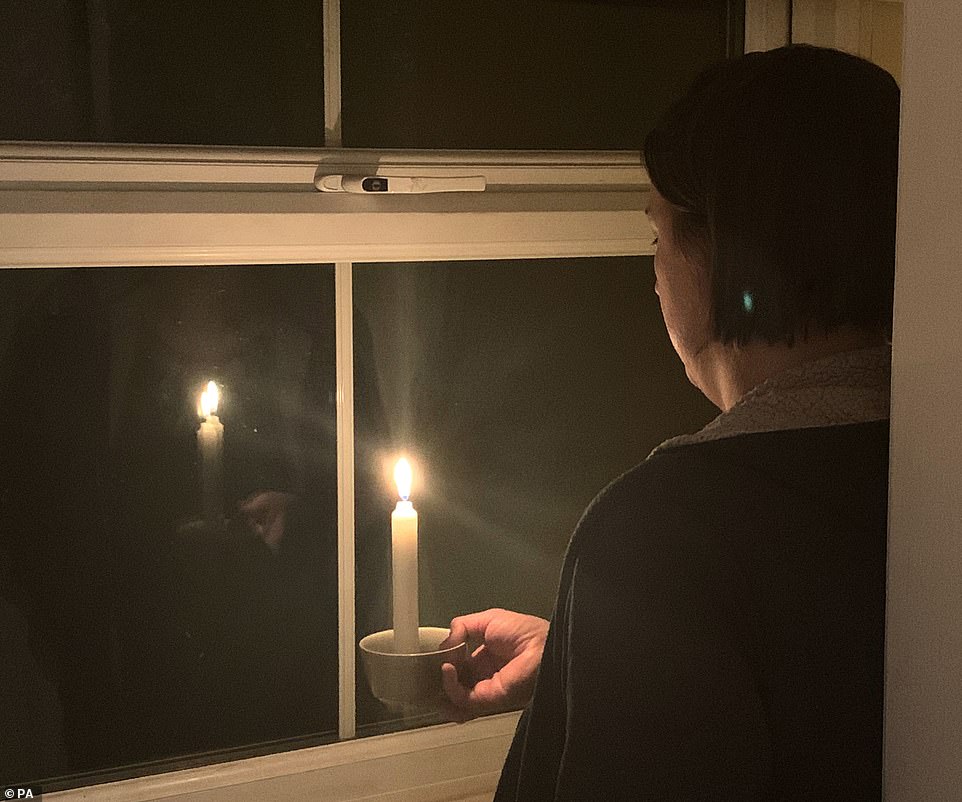