Accusing the Wombles of being racist is an insult to my mum’s memory: Elisabeth Beresford’s son hits out at right-on revamp of the classic show

Underground, overground, Wombling free, they taught a generation of British children to respect the environment long before Greta Thunberg was even born. Yet an attempt to update the Wombles for a new, politically correct era has led to an extraordinary row with the family of their creator, Elisabeth Beresford, with claims that a remake featuring ‘woke Wombles’ is a step too far.

Hollywood animators have been working on a major revamp of the 1970s BBC television series, with one source telling The Mail on Sunday that the original version was ‘sexist’.

Now the author’s son fears the furry recyclers of human rubbish will be drawn into the modern world of identity politics with the introduction of new and altered characters who may be gender-fluid or of different races. 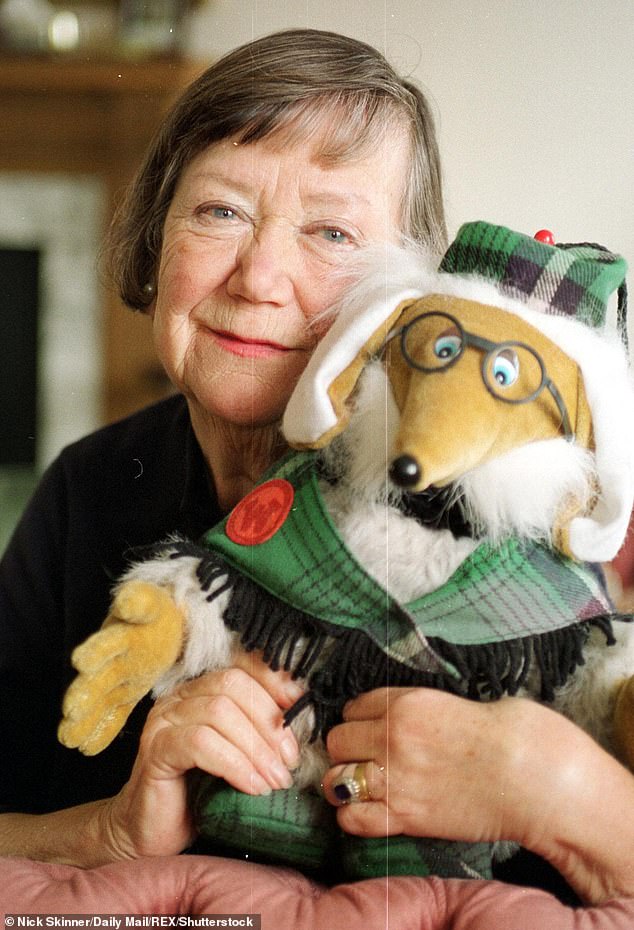 Pictured: new-look Wombles, feared by some to be politically correct and ‘woke’

‘It’s a fight for the soul of the Wombles,’ says 64-year-old Marcus Robertson, who was by his mother’s side the day she came up with the idea for the books. ‘I feel we’re being held hostage. We’ve never owned all the rights, but we’ve always had respect for the idea that the Wombles came from my mother’s head. Now that’s all gone.’

Beresford’s books were first published in 1968 as an attempt to rival the success of Paddington Bear, but it was only when the animated litter-pickers appeared on the BBC that characters including Wellington, Orinoco and Great Uncle Bulgaria really captured the public’s imagination. Famous for collecting rubbish and turning it to good use – often in the form of Heath Robinson-type contraptions – the Wombles even inspired a pop group of the same name and made hits such as Remember You’re A Womble and The Wombling Song by composer Mike Batt.

Yet today, Marcus believes the wishes of his late mother have been ignored by the British businessman who recently acquired control of the Wombles copyright and that the proposed makeover is a betrayal of her legacy.

‘My mother had a golden rule when it came to writing children’s books – there should be no sex, no religion, no politics, no drink, no drugs, no violence and no smoking,’ he says.

‘As far as the family is concerned, it should be a very simple story for children to enjoy, with no hidden messages other than the one that has always been there – about looking after their surroundings. Wombles are not humans. Sometimes I think that’s not understood.’

His mother dreamed up the Wombles on Boxing Day, 1967. She had taken Marcus and his sister Kate for a walk on Wimbledon Common in South-West London, leaving her husband, BBC tennis commentator Max Robertson, with his visiting parents at home. Marcus recalls: ‘My sister said, ‘Isn’t it lovely on Wombledon Common’ and my Mum said, ‘That’s it! The Wombles.’ She looked around to figure out what the Wombles were going to do and saw some rubbish. ‘They’re going to pick up rubbish,’ she said, and it went from there.

‘Originally she was going to name the characters after London Underground stations, but by the time she’d completed the book, they were named after places and features from around the world.’ 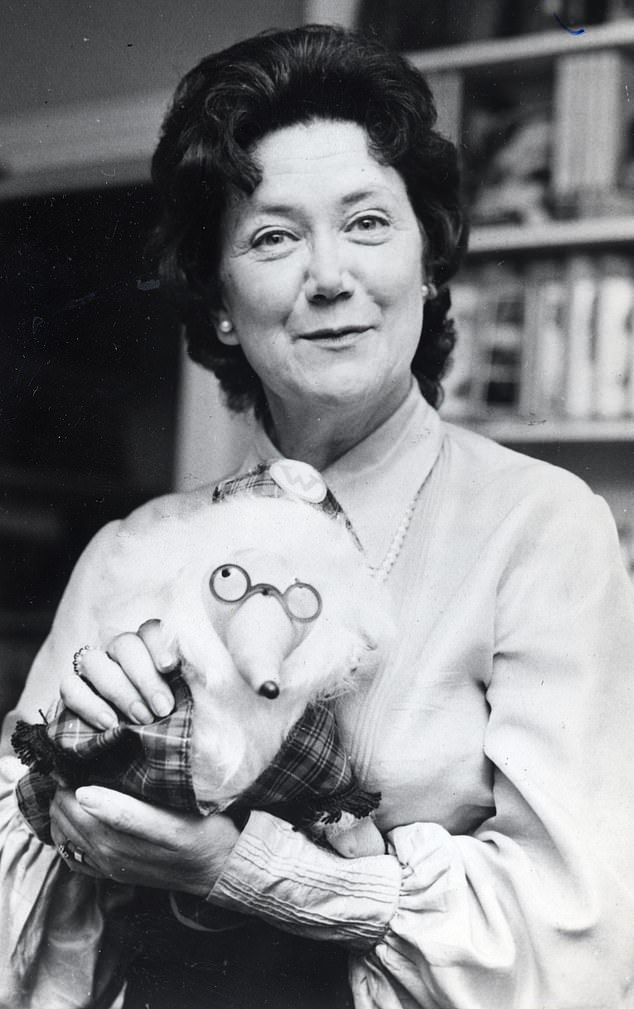 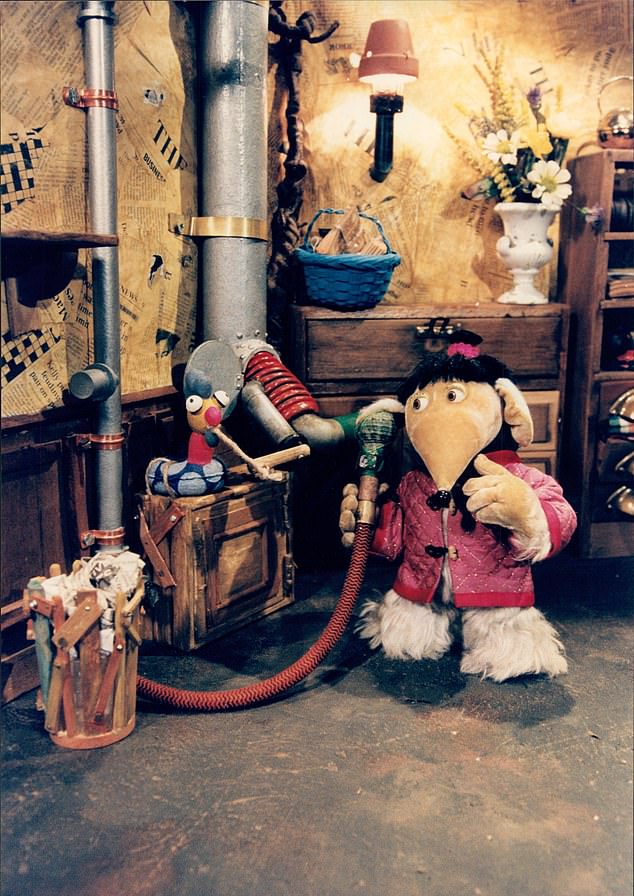 Hollywood animators have been working on a major revamp of the 1970s BBC television series, with one source telling The Mail on Sunday that the original version was ‘sexist’

The characters themselves were inspired by members of Beresford’s family. There was Orinoco, who was lazy and greedy, just like Marcus as a boy. Madame Cholet, the cook with a pinny and a mob cap, was based on Beresford’s mother, Beatrice. Great Uncle Bulgaria, head of the clan, was a version of her father-in-law. Tobermory, the gadget maker, was inspired by her brother, Aden, while excitable Bungo was based on tomboy Kate.

The music accompanying the TV series became as famous as the puppets, and Marcus has clear memories of the moment the theme tune was born. Aged 15, he was asleep in his room when he was woken by his parents, who were with a young man called Mike Batt.

‘They woke me up because the piano was in my room,’ Marcus recalls. ‘He played the song and it was so catchy. It was the first time anyone had heard it. Those are the sort of things you treasure.’

The original series, narrated by Bernard Cribbins, ran from 1973-75, since when the animation has proved popular around the world.

For most of that time, the rights were owned by Beresford’s family and by Batt, who held a controlling 85 per cent share.

And there the story might have remained but when Batt found himself in financial difficulty and filed for personal bankruptcy in September 2017, Craig Treharne bought his stake and decided to take the Wombles in a new direction.

Marcus says: ‘We’d had an agreement with Mike that we would get the opportunity to buy the rights back if anything went wrong. But before we knew it, Craig had bailed him out.’ Mr Treharne, 53, has been involved in numerous business ventures, including a company that makes steam rooms and saunas.

Marcus says they had several conversations about the future of the Wombles but he became increasingly dismayed with what Mr Treharne appeared to have in mind. 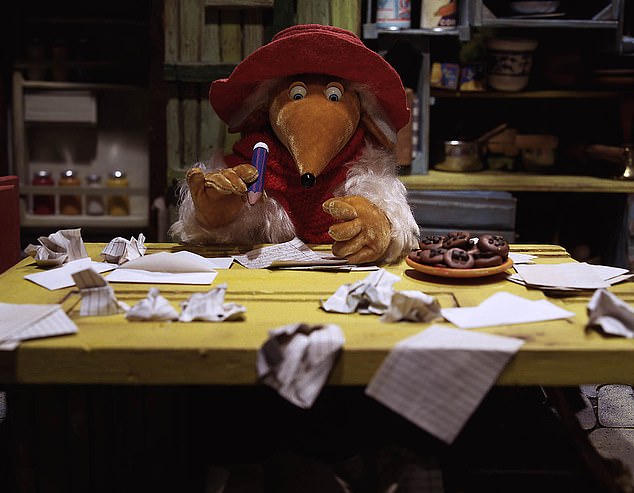 Pictured: Orinoco writing a letter in the kitchen with lots of cakes to hand 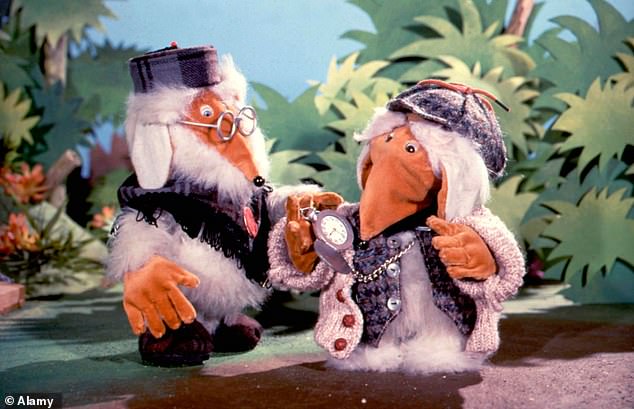 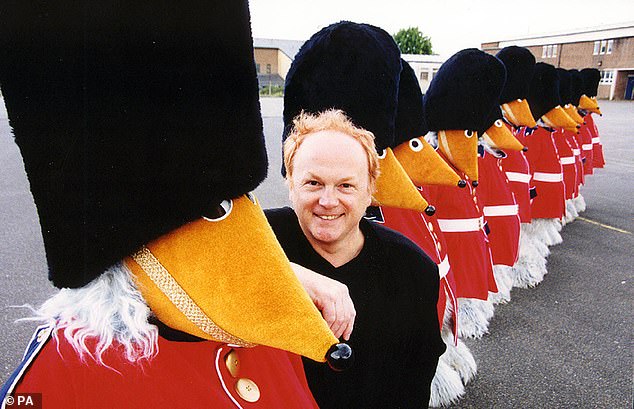 Pictured: Mike Batt, composer of the theme song, who here had assembled a Wombles guard of honour following a commission from organisers of the Queen Mother’s 100th birthday

‘There was talk of getting into sex and politics,’ he says, recalling one particular meeting in August 2018. ‘I recognise that the modern world is different, and I don’t have a problem with things being woke. But I don’t think children need to see that. It’s for four to seven-year-olds. Children just want something that captures their imagination. I’m not a creative writer but I still know how to think like a Womble.’

According to Marcus, Mr Treharne’s makeover would also include introducing Wombles of different cultural backgrounds. ‘Wombles have grey fur and orangey-brown faces,’ says Marcus, gesturing to a Great Uncle Bulgaria toy as evidence.

‘They’re not white. They’re not black. Wombles are Wombles. If you made a children’s television series about blackbirds, you wouldn’t create whitebirds, would you?’

Moreover, the precedents are worrying. In 1996, Beresford created Stepney, a ‘streetwise’ Womble from London’s East End in an attempt to mitigate the Wombles’ bourgeois reputation. The character appeared in a version of the series made by a Canadian company.

Marcus says: ‘The idea was that Stepney would represent people from more diverse parts of London and that he’d have dreadlocks.

‘But the company which owned the Canadian TV rights blacked him up, against Mum’s wishes.

‘As she feared, it got absolutely panned by the critics. They said it was like a ‘black-and-white minstrel Womble show’. It was dismissed as patronising.

‘I told Craig I don’t believe in black or white Wombles and neither did my mother, because Wombles are Wombles. We believe in the diversity of humans, but Wombles are not ethnic humans.’

Marcus says he was led to feel that his mother’s views had been racist. ‘Mum would be so hurt by that,’ he says. ‘It’s so insulting to her memory. And I feel like I’m batting for her on Earth.’

Beresford would later retire to Alderney in the Channel Islands. She died on Christmas Eve 2010, aged 84.

Marcus’s wife, Marianne, who was also at the 2018 meeting with Mr Treharne, says they felt ‘sneered at’ and adds: ‘I think Craig thought we were stuck in the past and that we had to evolve to make a commercial product. He didn’t say that in so many words, but the impression was that we didn’t understand current issues.

‘It was as if he thought we were stuck in a time warp and you have to evolve characters to make them relevant.’

Indeed, a source close to the new project told the Mail on Sunday: ‘The original Wombles came from a different era and some of the things they say could come across as sexist or not politically correct for today’s audience.

‘The idea is to make the new Wombles relatable.

‘The Wombles were ahead of their time in terms of recycling, and so the film-makers are taking that green theme and expanding on it.

‘They have been working on this project for a while. It keeps changing between whether it’s going to be a series, a film or both. I think they want to make it as green and PC as possible. This is a new Wombles for a new generation.’

Mr Treharne has already produced a short animated clip of the new-look Wombles and some of the redrawn characters can be seen on a Facebook site, although purists will be disconcerted to find that the famously pointy-nosed creatures now have mouths.

Whereas the original animations featured cuddly, slightly dishevelled puppets, the new characters are computer-generated and slick. Madame Cholet, with her lace apron, has been replaced by a beret-wearing Womble of apparently indeterminate gender.

Marcus says: ‘They asked for our opinion but after that we were cut out. I think it’ll go the same direction as Paddington Bear. And as you can imagine, it will be commercially successful.

‘We own 15 per cent of the business so we’d still make money from it, but that’s not the point. We want it to be done properly and for the people who are driving it forward to be sympathetic to the creative history. I don’t have a problem with them being successful if they were straight and consulted us. I’m not concerned about the possibility of a film – I’m concerned about the possibility of a film being done badly.’

For Marcus, this is more than just a minor disagreement over style.

‘The Wombles are made-up creatures, but to me they’re real. I’ve lived with them since I was ten.

‘I know it sounds ludicrous, but if I met one it wouldn’t shock me. I never felt like the real Christopher Robin, who hated his father’s Winnie-the-Pooh books. What an honour to be a Womble! I’ve never once wished this hadn’t happened – until now, sadly. I’m hating this now.’

He adds: ‘I feel like I’ve failed Mum in allowing it to get like this. I should have fought a lot earlier.

‘Now I need to retrieve the soul of the Wombles. I want to be able to walk past her ashes at a church in Alderney and say, “We’ve sorted it, Mum.”‘

Marcus has no veto on the new Wombles despite his 15 per cent holding. In an ideal world – maybe a Wombles’ world – he says he would buy back the company and use any money made from new ventures to set up a charitable Womble Foundation. But this, he accepts, is unlikely.

He adds: ‘It’s not necessarily about taking back control of the Wombles. The Wombles are based on honesty, transparency and good human values. That’s the way they got on. They had foibles, as we all do, but the idea of it becoming a money-machine for people who don’t understand the values of the Wombles is terrible.

‘I want someone who just gets it. You can’t teach that to someone.’

Lawyers for Mr Treharne declined to comment in detail on Marcus’s claims but said: ‘Mr Robertson’s views are not shared by Wombles Copyright Holdings Limited or the Wombles. WCHL and the Wombles believe in an inclusive and diverse world, where everybody should be treated equally.’