London: Prime Minister Boris Johnson used a whirlwind trip across Europe on Thursday (local time) to announce a boost in Britain’s military presence in the region as part of Western efforts to deter Russia from invading Ukraine.

Britain will send fighter jets and warships to Europe in addition to military assistance it has already sent to Ukraine. The UK will also put an additional 1000 troops on standby to respond to any humanitarian crisis that arises from conflict in eastern Ukraine. 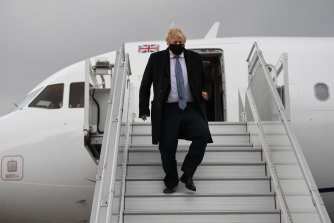 British Prime Minister Boris Johnson arrives in Warsaw ahead of talks with the Polish President on Thursday.Credit:Getty Images

In Moscow, the UK’s diplomatic efforts appeared to make little progress after Russia’s Foreign Minister Sergei Lavrov humiliated his British counterpart Liz Truss, saying to her face that talking to her was like the “deaf talking to the blind.”

Johnson, at NATO headquarters in Brussels said Europe was approaching its “most dangerous moment” in dealing with the Ukraine crisis. 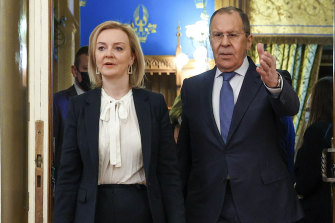 The UK’s Foreign Secretary Liz Truss was forced to deny she had been “mute” during a meeting with her Russian counterpart Sergey Lavrov.Credit:Russian Foreign Ministry Press Service via AP

“I honestly don’t think a decision has yet been taken [in the Kremlin],” he said. Our intelligence, I’m afraid to say, remains grim.

“This probably the most dangerous moment, I would say – in the course of the next few days – in what is the biggest security crisis that Europe has faced for decades and we’ve got to get it right.”

He said the West was “increasingly at one” on how to push back against Russian aggression. Johnson also congratulated Germany’s Chancellor Olaf Scholz on committing to a harder position on Nord Stream 2 – the gas pipeline that runs between Germany and Russia. The United States has said it would shut it down – potentially with sanctions – if Russian President Vladmir Putin moved into Ukraine.

NATO boss Jens Stoltenberg said that Russia had a choice and that if it chose confrontation “it would pay a high price.”

“The number of Russian forces is going up, the warning time for a possible attack is going down,” he said. “The UK is playing a leading role delivering militarily and diplomatically.”

Johnson then visited his Polish counterpart Mateusz Morawiecki in Warsaw. Poland, unlike Ukraine, is a member of NATO and the EU and shares a 535 kilometre-long border with Ukraine. It is the EU’s most-crossed border.

“Many politicians in Europe have sadly been woken up from their geopolitical nap,” Moraweicki was quoted as saying via an English translator.

“We were not napping, not myself and Boris, we were of the fact that there were threats that are very, very apparent, now the rest of the world needs to wake up.

“We will not be intimidated, we will work for peace, we will strengthen the eastern flank of NATO. Together with our allies we are both determined and unified.”

‘Should have been Britain, not France at the table’

But former British prime minister Sir John Major told the London think tank Institute for Government that Britain had lost its clout on the world stage and the ability to influence the global order, partly due to Johnson’s successful Brexit campaign.

“For example, the Foreign Secretary today is in Moscow meeting her counterpart – I welcome that,” he said.

“The Prime Minister has a brief conversation, I gather, with President Putin about Ukraine, but the President of France had a five-hour meeting across the desk – now that would, typically, have been us.

“It’s an illustration of how I do not think our weight in the international community is as strong as it was or as we would wish it to be.”

Truss, the British Foreign Secretary, received a frosty welcome Moscow when Russian counterpart Lavrov accused her of being “mute” during their meeting.

“I certainly wasn’t mute in our discussions earlier, I put forward the UK’s point of view on the current situation as well as seeking to deter Russia from an invasion of Ukraine,” Truss told a news conference in Moscow while standing alongside Lavrov.

with Reuters and AP