Long to reign over us: The Queen marks 25,000 days on the throne tomorrow after being crowned at 25 to become Britain’s longest-serving monarch aged 94

The Queen will have reigned for 25,000 days tomorrow, passing another milestone as the nation’s longest serving monarch.

Elizabeth II became sovereign on February 6, 1952 on the death of her father, King George VI, when she was 25.

And the 94-year-old is now less than two years away from celebrating her Platinum Jubilee – 70 years on the throne – in 2022.

The Queen has been a figure of continuity as her country changed through the 20th century, the Millennium and into the 21st century amid new technological and social advances and a succession of British governments.

During the seven decades of her reign, man has landed on the Moon, Britain got its first, then second, female prime minister, the internet was invented, and gay marriage was legalised in the UK.

The public has looked to the Queen in times of tragedy – the September 11 terror attacks, the London bombings, the death of Diana, Princess of Wales, and more recently during the coronavirus crisis.

As well as being the longest-reigning monarch in British history, the Queen is also the longest still-serving sovereign and wealthiest Queen in the world, and the oldest British monarch. 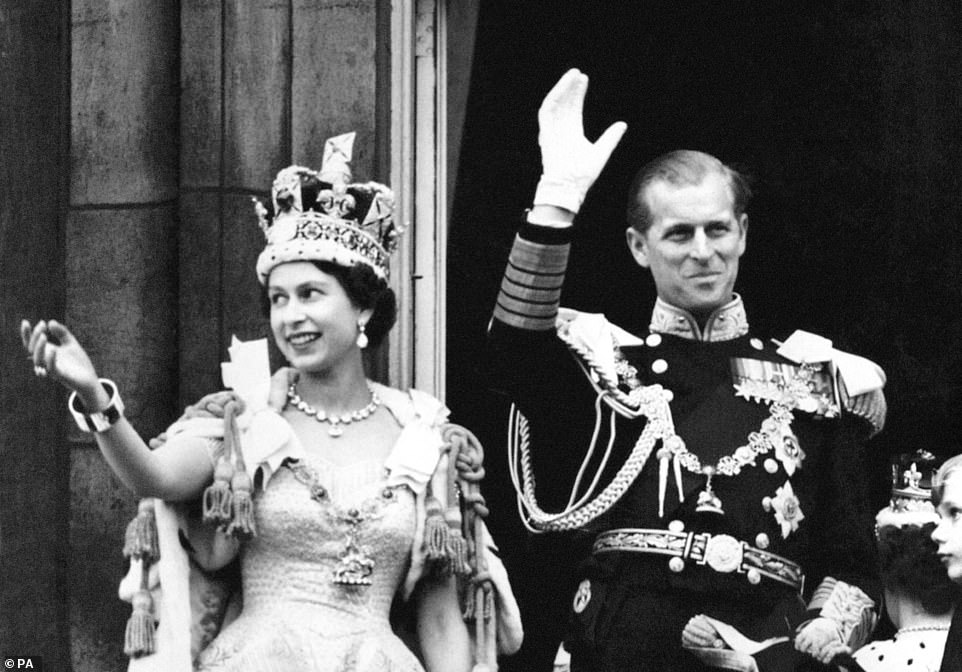 JUNE 2, 1953: The Queen wearing the Imperial State Crown and the Duke of Edinburgh in the uniform of Admiral of the Fleet wave from the balcony to the onlooking crowds around the gates of Buckingham Palace after her Coronation on June 2, 1953 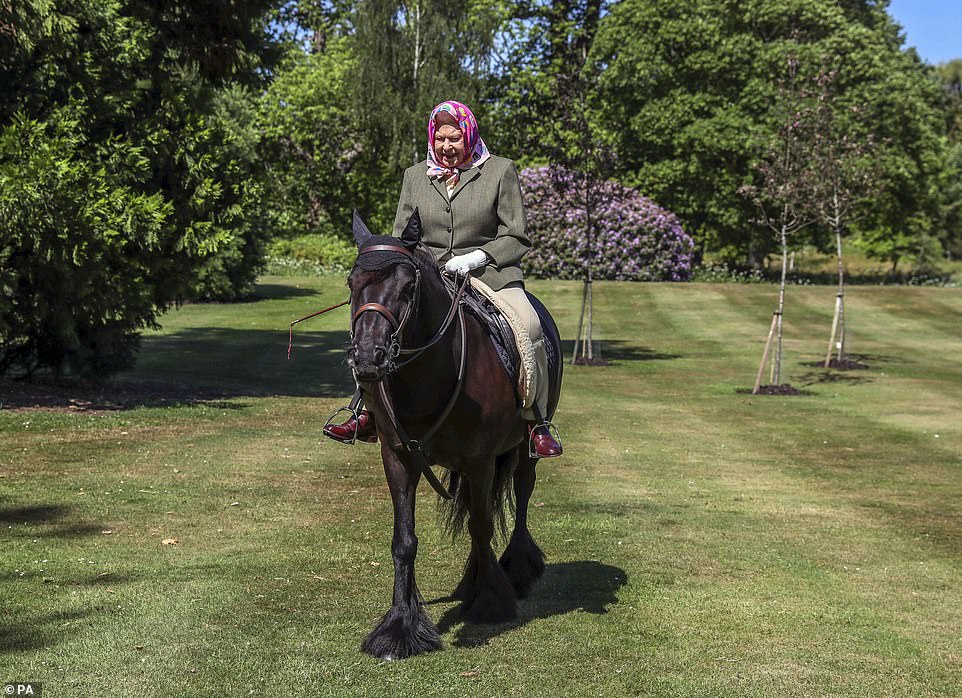 JUNE 1, 2020: Her Majesty riding Balmoral Fern, a 14-year-old Fell Pony, in Windsor Home Park. The Queen – the nation’s longest serving monarch – will have reigned for 25,000 days on Saturday. The 94-year-old continues to saddle up and ride around the grounds of her home 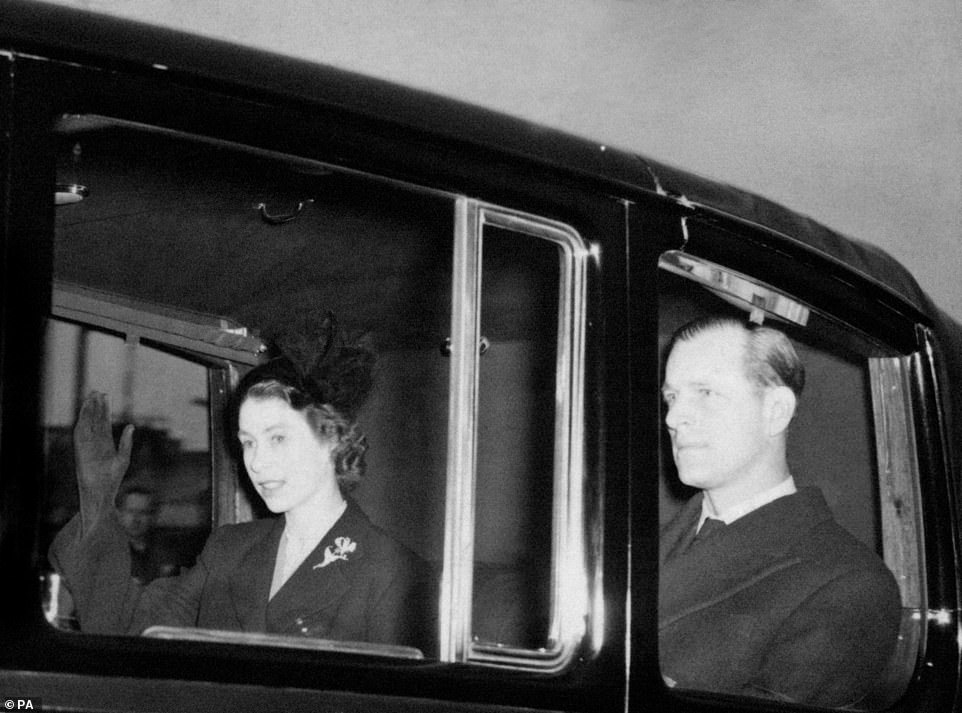 FEBRUARY 7, 1952: The Queen, then just 24, returning to Clarence House, London with the Duke of Edinburgh from London Airport, after the sudden death of her father, King George VI 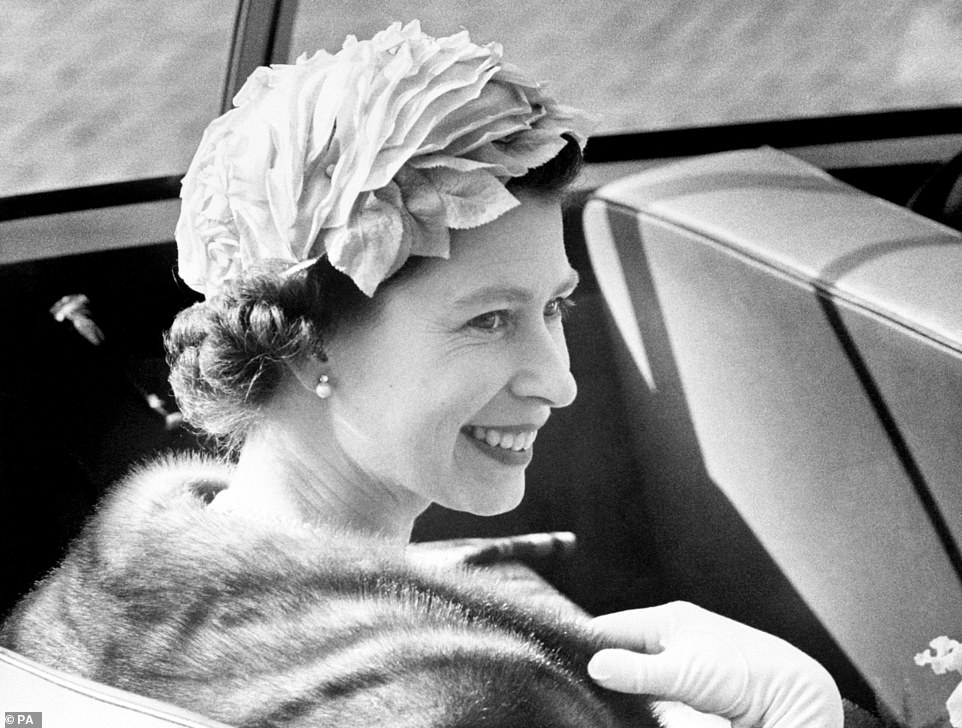 MAY 24, 1957: The Queen arriving at the Copenhagen Town Hall after driving from the Amalienborg Palace in an open car 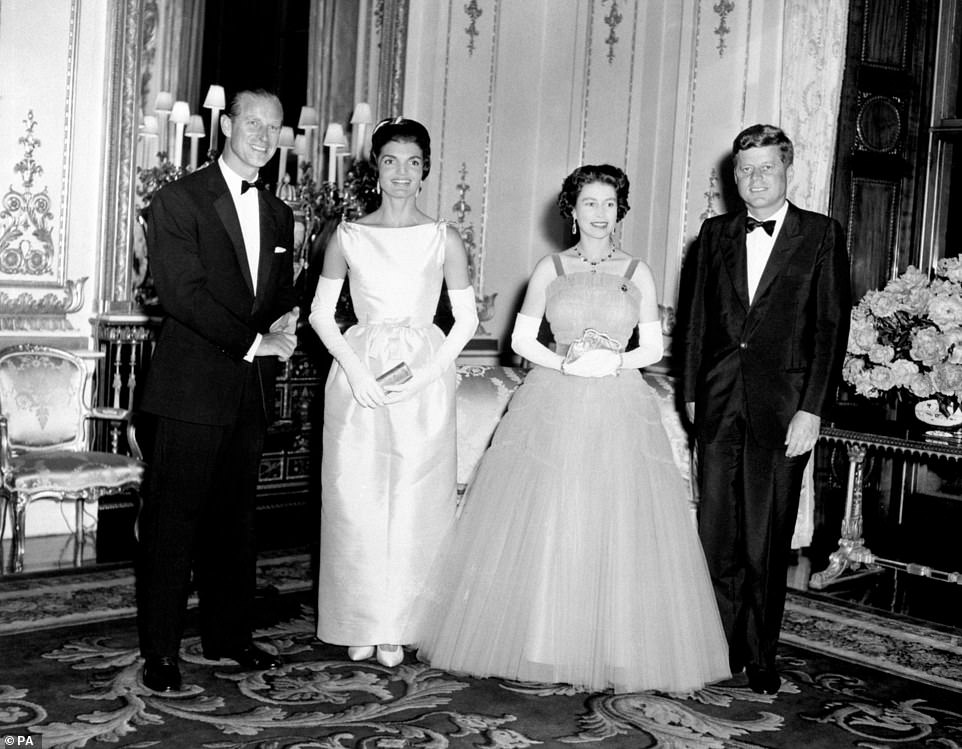 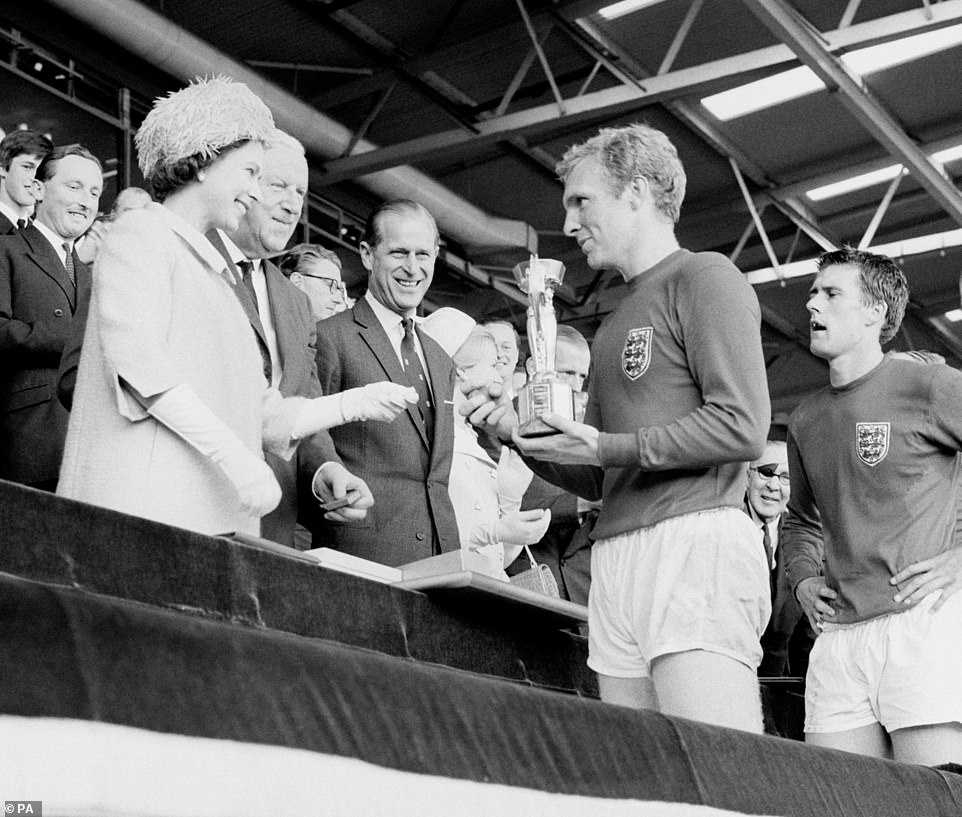 JULY 30, 1966: England captain Bobby Moore holding the Jules Rimet Trophy, after collecting it from the Queen following England’s win at the World Cup at Wembley, London 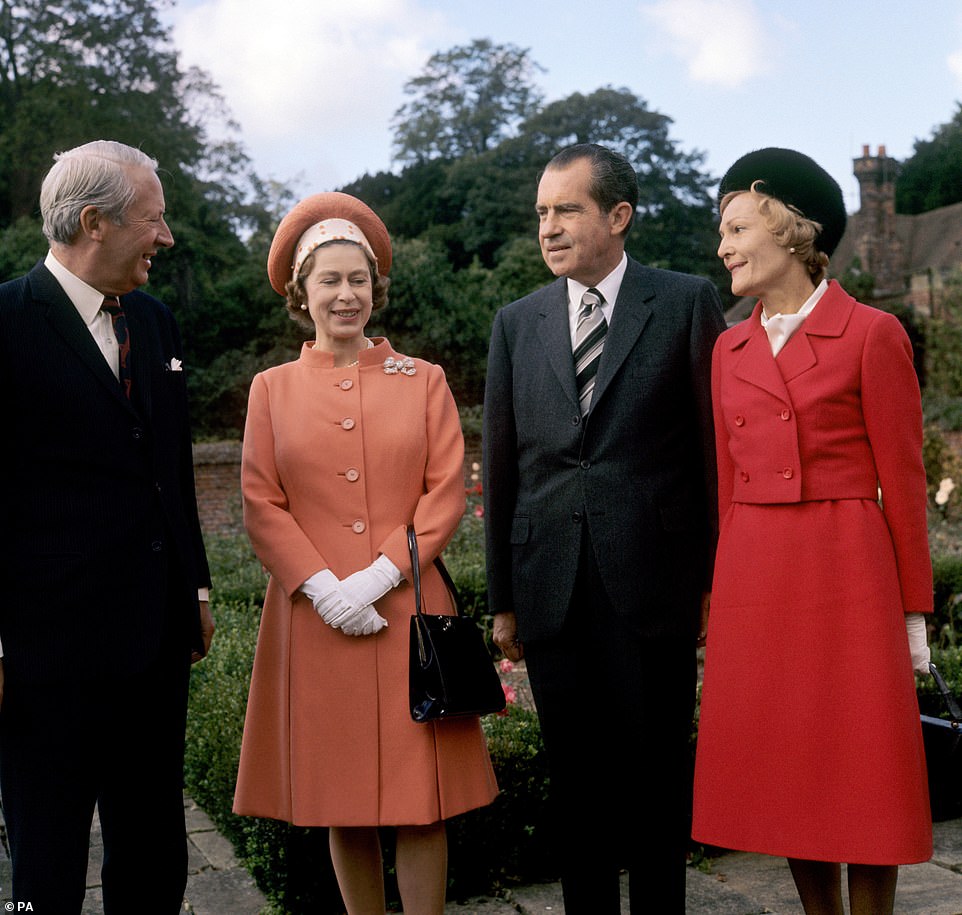 OCTOBER 3, 1970: Her Majesty with Prime Minister Edward Heath (left), American President Richard Nixon and his wife Pat Nixon at Chequers, the official country residence of the Prime Minister in Buckinghamshire 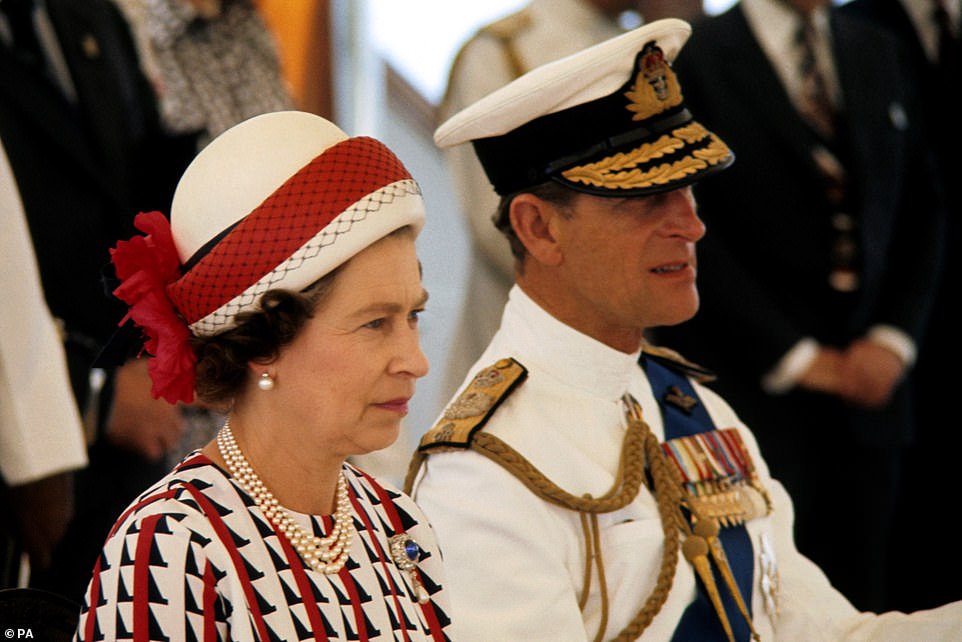 FEBRUARY 16, 1977: The Queen and the Duke of Edinburgh as they received a traditional Fijian welcome on board the Royal yacht Britannia on their arrival at Suva 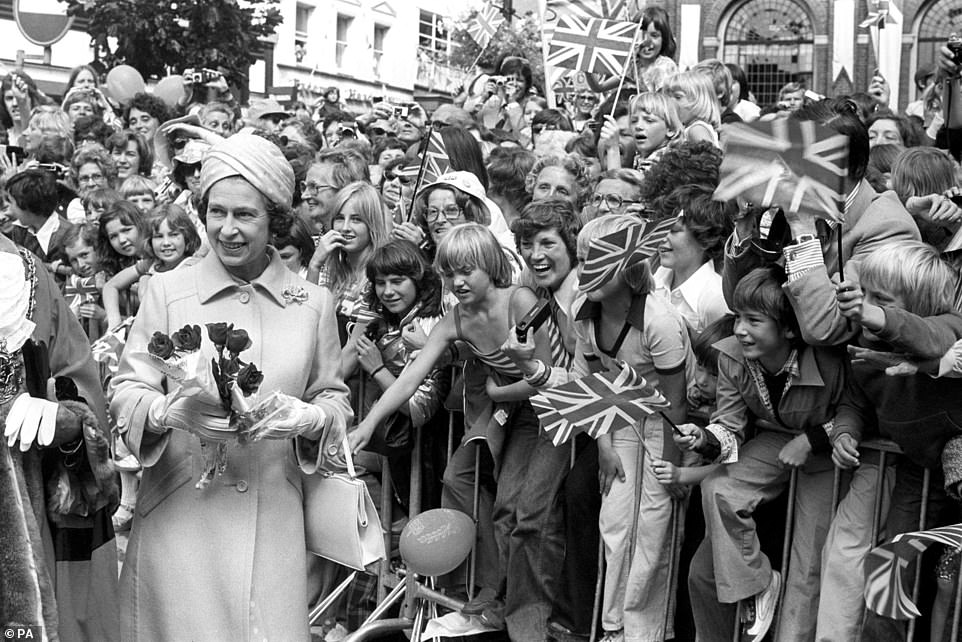 JULY 11, 1977: The Queen receiving flowers during a walkabout among the crowds in Ipswich, during her Silver Jubilee Tour of Britain 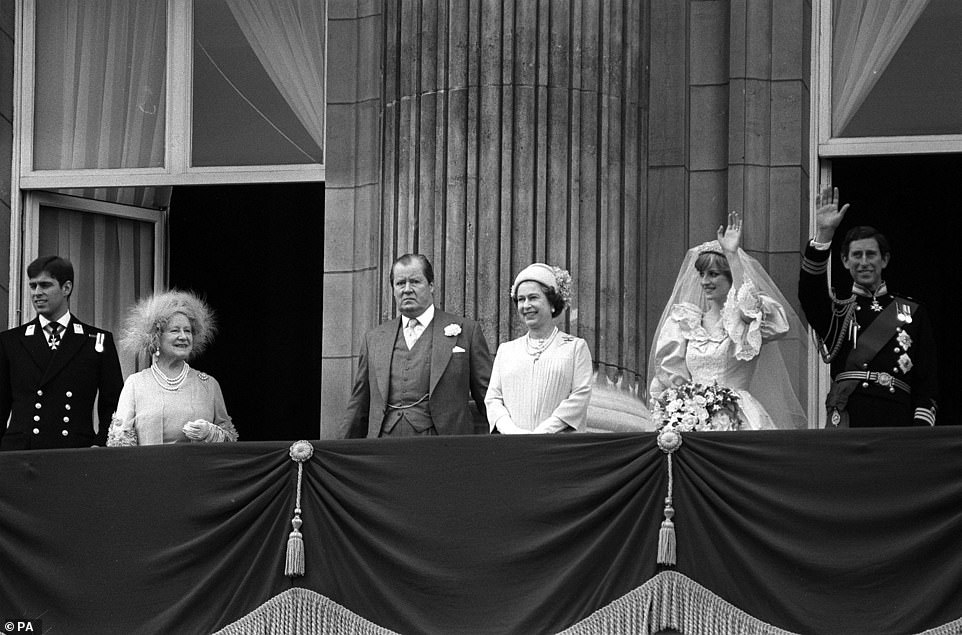 JULY 29, 1981: The Prince of Wales and Diana, Princess of Wales waving to the crowds outside Buckingham Palace from the balcony after their wedding at St Paul’s cathedral

When she became the country’s longest-serving monarch in 2015, she thanked the nation for its kind messages, but admitted that the royal record was, ‘not one to which I have ever aspired’.

‘Inevitably a long life can pass by many milestones. My own is no exception,’ she remarked.

The Queen will be at Windsor Castle with the Duke of Edinburgh and the ‘HMS Bubble’ of staff who have been running the couple’s reduced household.

But Her Majesty’s approach to having been on the throne for 25,000 days will undoubtedly be a matter-of-fact one, with the milestone unlikely to be on her radar. A Buckingham Palace spokesman said: ‘The Queen is spending the day privately.’

Pakal the Great is thought to have ascended to the throne at the age of 12- years-old and during his rule managed to expand Palenque’s power in the western Maya states.

The Mayan civilisation reached its peak between 250 and 900 AD, when it ruled large swathes of what is now southern Mexico, Guatemala, Belize and Honduras.

Meanwhile, just ahead of the British monarch is Johann II of Liechtenstein, who ruled from 1858 and 1929.

This is followed by Bhumibol Adulyadej of Thailand.

King Bhumibol reigned from 1946 until his death in October 2016 and was the world’s longest living reigning monarch before the Queen.

Holding on to the top spot is Louis XIV of France, with an impressive 72-year and 110-day reign.

Known as Louis the Great, the French monarch became King at the age of four following the death of his father Louis XIII, and ruled from 14 May 1643 to 1 September 1715.

The Queen, 94, has been seen riding at Windsor throughout lockdown and celebrated both her actual and official birthdays, as well as the Duke of Edinburgh turning 99.

The Queen said of the global Covid-19 pandemic: ‘While we have faced challenges before, this one is different.’

She also delivered two rare televised addresses to the nation just weeks apart during lockdown, reassuring the country that the virus would be overcome, telling those in isolation: ‘We will meet again.’

In another speech to mark the 75th anniversary of VE Day, she told how the message at the end of the war in Europe was ‘never give up, never despair’. 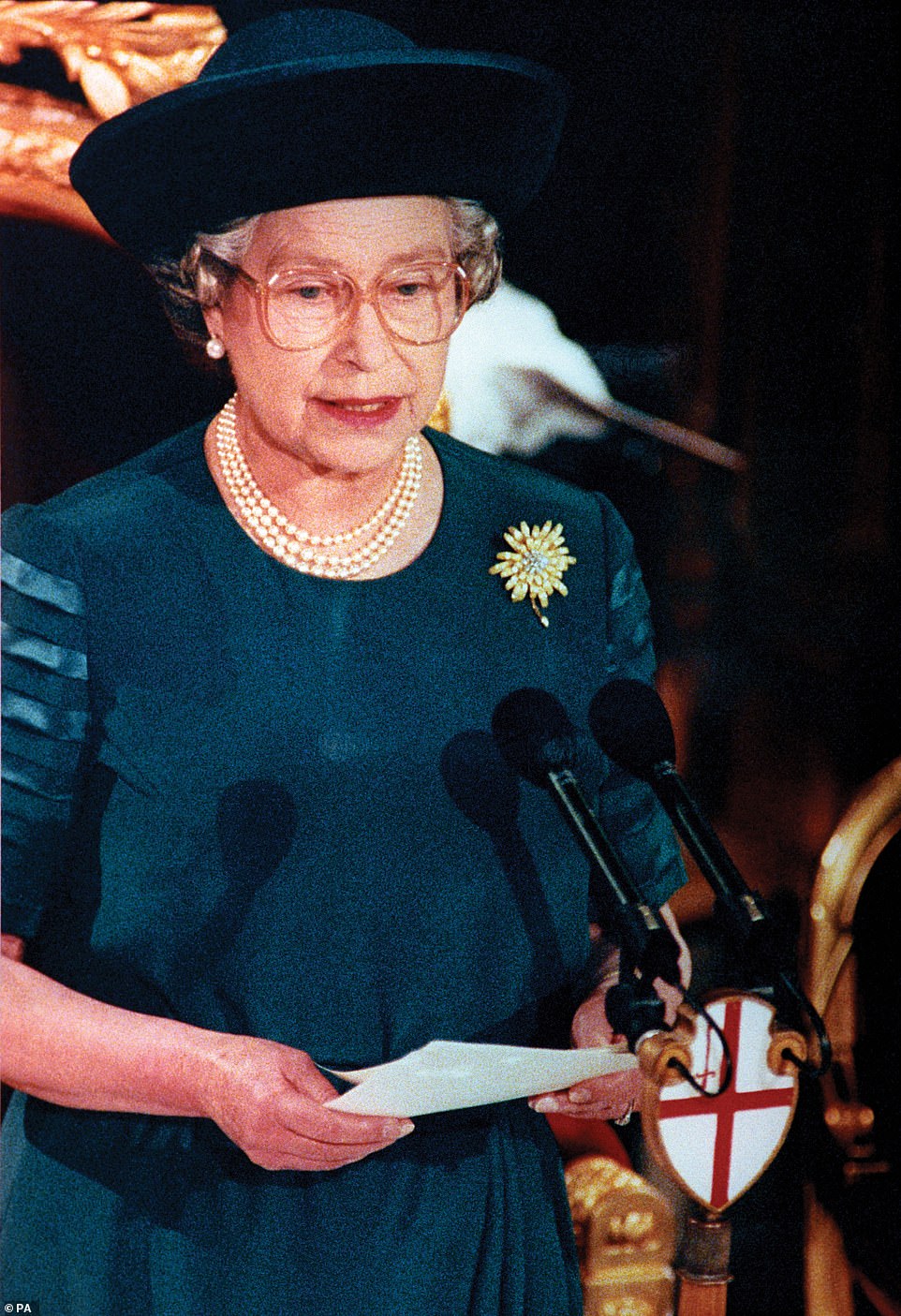 NOVEMBER 24, 1992: The Queen delivering her speech after a Guildhall luncheon to mark the 40th anniversary of her accession to the throne 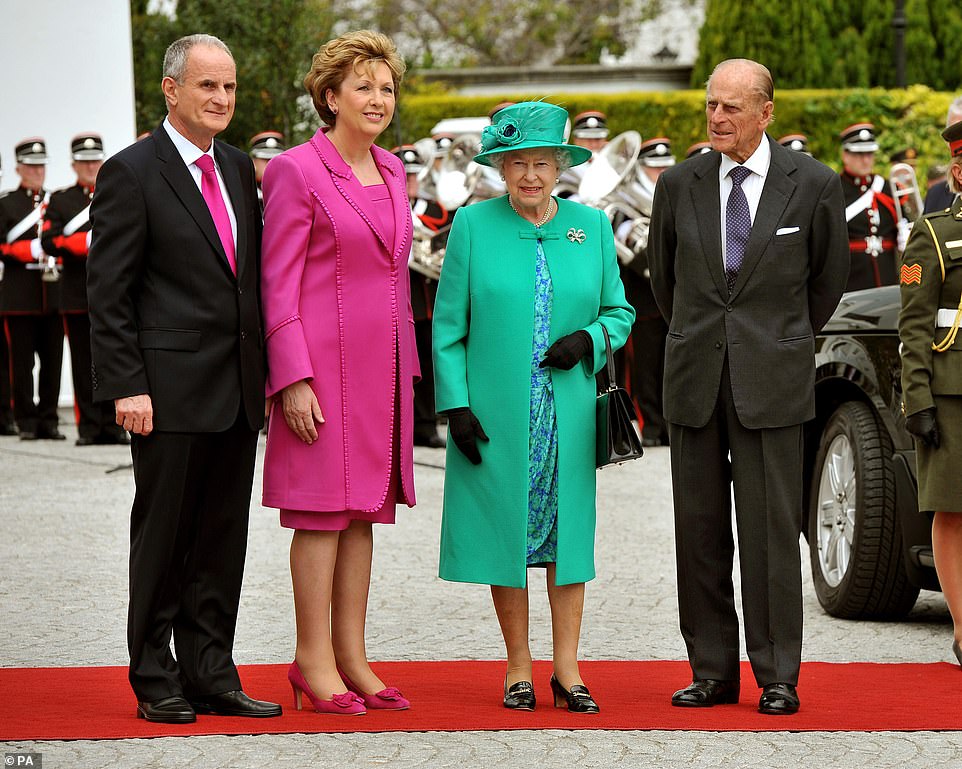 MAY 17, 2011: Her Majesty (second right) with Irish President Mary McAleese (second left) after arriving at Aras an Uachtarain (The Irish President’s official residence) in Phoenix Park, Dublin, Ireland, as Dr Martin McAleese (far left) and The Duke of Edinburgh (far right) look on 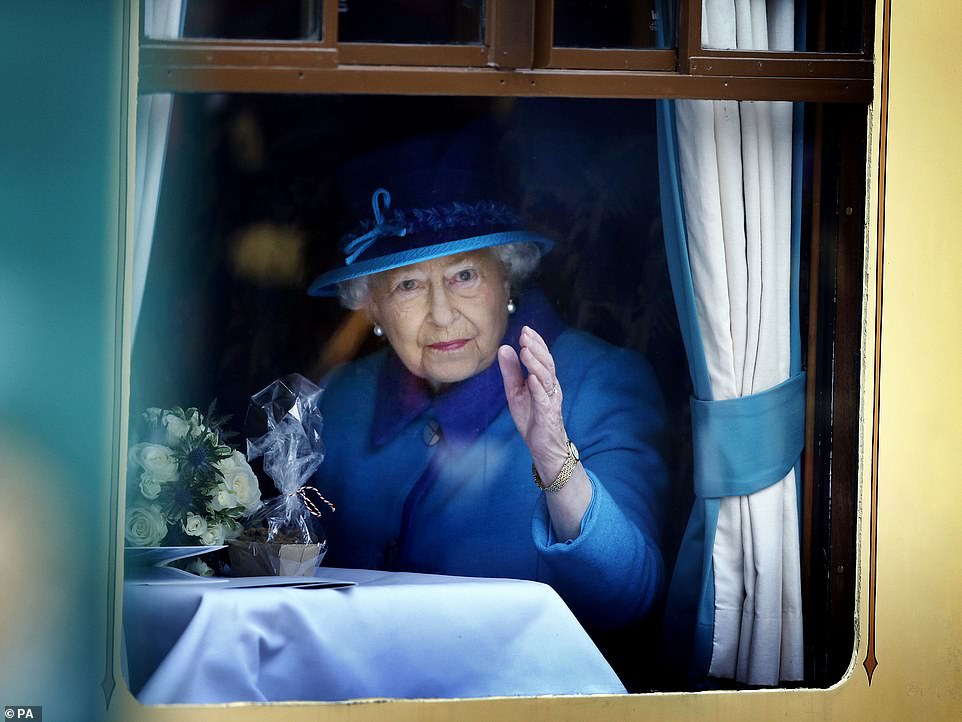 SEPTEMBER 9, 2015: The Queen pictured in 2015, on the day she became longest reigning monarch 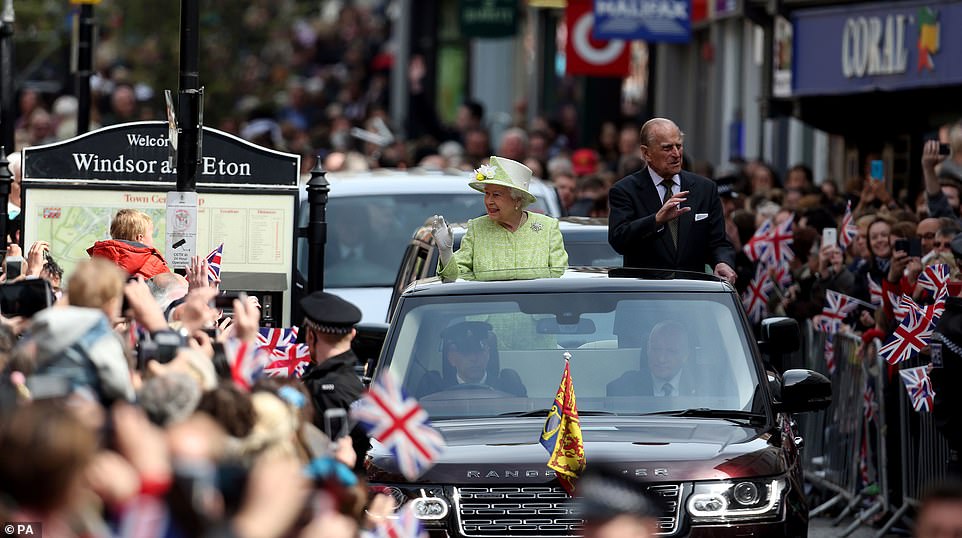 APRIL 21, 2016: The Queen and the Duke of Edinburgh riding an open top Range Rover in Windsor, Berkshire, as she celebrates her 90th birthday 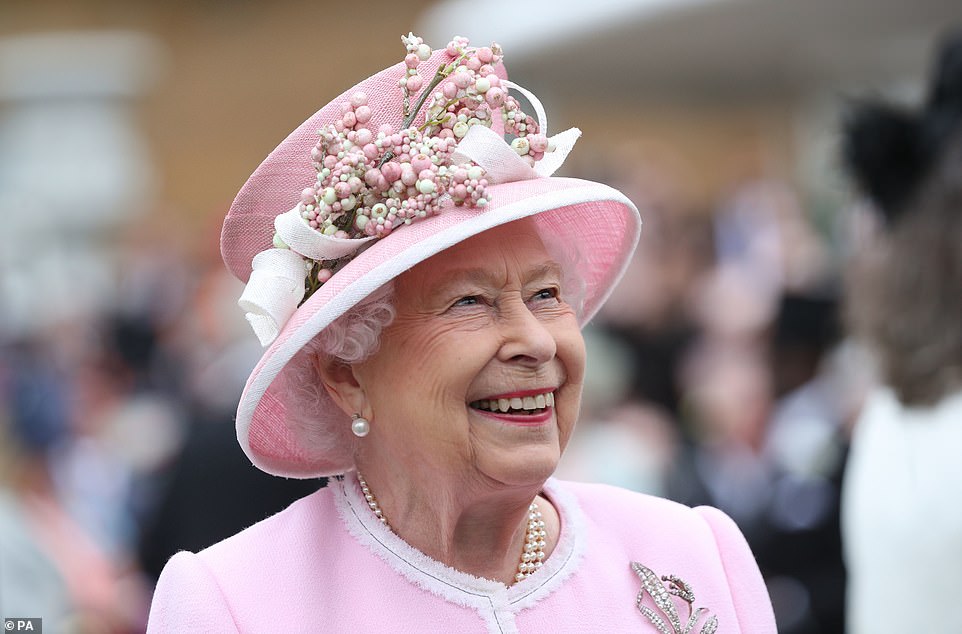 MAY 29, 2019: The Queen meeting guests during a Royal Garden Party at Buckingham Palace in London

From the Falklands War and Munich Air Crash to England winning the World Cup and Megxit: The milestones and events in the Queen’s long reign

As the Queen reaches 25,000 days on the throne, here are some of the events and milestones of her reign:

1955: Cyprus goes on strike against British rule. Sir Winston Churchill resigns as Prime Minister due to his failing health. The Warsaw Pact is signed by the Soviet Union and its Eastern Bloc allies. Princess Margaret calls off plans to marry Group Captain Peter Townsend.

1957: Prime Minister Harold Macmillan tells a Tory rally ‘most of our people have never had it so good’. The Treaty of Rome sets up the European Economic Community. Russians launch the Sputnik satellite, the first man-made object ever to leave the Earth’s atmosphere.

1959: The Mini car makes its first appearance and the first UK motorway, the M1, opens.

1962: US spaceman John Glenn orbits the Earth. The Cuban Missile crisis is resolved.

1976: James Callaghan replaces Wilson at No 10. One of the hottest summers on record. Concorde begins commercial flights.

1992: The Queen’s ‘annus horribilis’ – the Princess Royal and Captain Phillips divorce, the Waleses and the Yorks separate, Windsor Castle goes up in flames. Black Wednesday – the day Britain crashed out of the ERM. The break-up of Yugoslavia.

1993: Publication of the Prince of Wales’s intimate talk with Camilla Parker Bowles. The IRA bombs Warrington. Buckingham Palace opens to the public. Stephen Lawrence is stabbed to death in Eltham, south-east London.

1996: The Duke and Duchess of York divorce. The Prince and Princess of Wales divorce. Mid-air crash in India kills more than 350. Fire in Channel Tunnel. Ban on exports of British beef amid BSE crisis.

2001: September 11 terrorist attacks. Foot-and-mouth outbreak in UK. First space tourist. Britain joins the US in strikes against the Taliban in Afghanistan.

2003: Britain and the US go to war against Saddam Hussein’s Iraq.

2008: Jury return a verdict of unlawful killing in the inquest into the death of Diana, Princess of Wales. The UK enters a recession following the financial crisis. Barack Obama is elected to become the first black US president.

2012: The Queen marks her Diamond Jubilee. London 2012 Olympics. The Duke and Duchess of Cambridge announce they are expecting a baby.

2016: Shooting at gay nightclub in Orlando. Queen celebrates her 90th birthday. British astronaut Tim Peake returns to Earth after a six-month mission on the ISS. The UK votes for Brexit in referendum on the EU. Theresa May becomes Prime Minister. The Queen becomes the world’s longest-reigning, still-serving monarch after the death of the king of Thailand.

2020: Megxit – Harry and Meghan quit royal life. Brexit – the UK leaves the EU. Coronavirus outbreak. Lockdown in the UK. Black Lives Matter protests follow the death of George Floyd in the US.