ROBERT HARDMAN: The most fitting of fly-pasts marks VE Day – and it’s the Mail that made the Spitfire tour of the skies possible

For 370 miles, from the South Coast to the South Midlands and back, they came out in their (socially distant) thousands to cheer the ultimate VE Day pick-me-up: A Spitfire paying tribute to the wartime generation – via Dame Vera Lynn’s garden and Colonel Tom’s back lawn.

Despite the lockdown, towns and villages all over the country were doing their best to recreate the carnival atmosphere of 1945 yesterday. And for one special band of veterans, there was a spectacular – and in some cases very emotional – tribute overhead.

Although all general aviation remains out of bounds during the pandemic, the Daily Mail was granted an exemption by Transport Secretary Grant Shapps yesterday. We wanted to fly a Spitfire over at least one care home, one NHS hospital and as many veterans as we could in between. 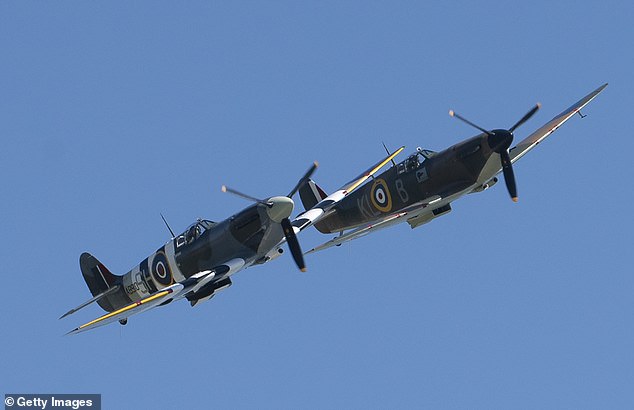 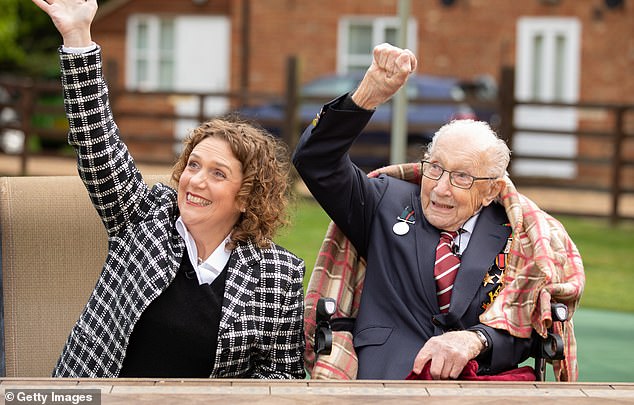 The fly-over passed the garden of Colonel Tom Moore, who cheered on with his daughter

Having asked for your nominations, our ‘Salute The Heroes’ flypast managed to pack in a good swathe of the countryside and ensure many gallant ex-servicemen and women felt the thanks of an eternally grateful nation.

‘What a fabulous day. Absolutely wonderful,’ said Michael de Burgh, 96, late of the 9th Lancers. ‘I don’t know why so much fuss is made over me.’ He had spent the day remembering friends who never came home and Reg Hunt, the recently-deceased comrade who pulled him from the wreckage of a burning tank and saved his life.

Not only had his family nominated him for a flypast but a local Forties-style trio had kindly agreed to perform a concert in his West Sussex garden. As they serenaded Mr de Burgh with their wartime numbers, our Spitfire appeared right on cue – and there was barely a dry eye in the entire village of Duncton.

Now known by its call sign, ‘G-ILDA’, the Mk IX Spitfire ended service as ‘SM520’ in 1944 and is now based at Goodwood, home of the Boultbee Flight Academy which donated yesterday’s flight as a tribute to both the veterans and those who look after them. Hence the ‘Thank You NHS’ signs which the pilot, Matt Jones, had affixed to the aircraft.

The hospital which received the most nominations for the flypast was the Queen Victoria in East Grinstead, West Sussex, former home of the ‘Guinea Pigs’, those brave airmen with horrific burns who underwent the pioneering plastic surgery of the great Sir Archibald McIndoe. 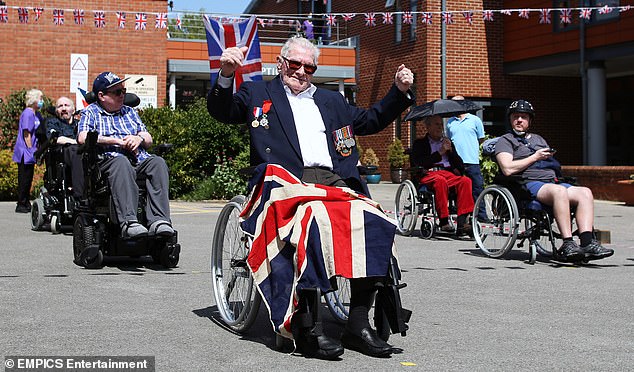 Veterans, including Len Gibbon (centre), 96, sat outside the Care for Veterans site in Worthing, Sussex, to watch the spectacle

There patients and medical staff waved flags while much of the town turned out in their gardens. Margaret Cook, 89, a former librarian at the hospital, had decked out her whole home in red, white and blue in tribute to her late father (who served in both world wars).

Gemma Farley, the hospital’s HR manager, said her grandfather, Ronald Farley, was especially thrilled with the flypast – which took place on his 95th birthday.

At the northern tip of our route in Bedfordshire was Colonel Tom Moore, the 100-year-old Royal Armoured Corps war veteran whose sponsored walk around his own garden has galvanised the entire country into donating £33million to NHS charities. He was out in the garden with his family, waving excitedly as G-ILDA swooped over his garden.

‘I’m one of the few who remember seeing Spitfires flying in anger so it’s lovely to see them flying in peace,’ he said afterwards, adding that VE Day brought back mixed memories. Having just returned from war in the Far East to train tank crews, he was ready to rejoin his comrades in the jungle. ‘We were still fighting an enemy with no morals and no fear of death.’

Down in Barming, Kent, the whole bunting-festooned street had turned out to toast Normandy veteran George Batts as the Spitfire came over his home. ‘I’m just so emotional that all this has been done for me,’ said the former Royal Engineer who has devoted years to the campaign for the Normandy Memorial now taking shape above the D-Day beaches.

One person who has seen many a Spitfire in her time is Dame Vera Lynn. Yet the sight and sound had lost none of its magic as G-ILDA came in low and circled round her home near Ditchling, East Sussex, where she was watching excitedly with her daughter, son-in-law and carers. ‘That brings back so many memories,’ she said afterwards. 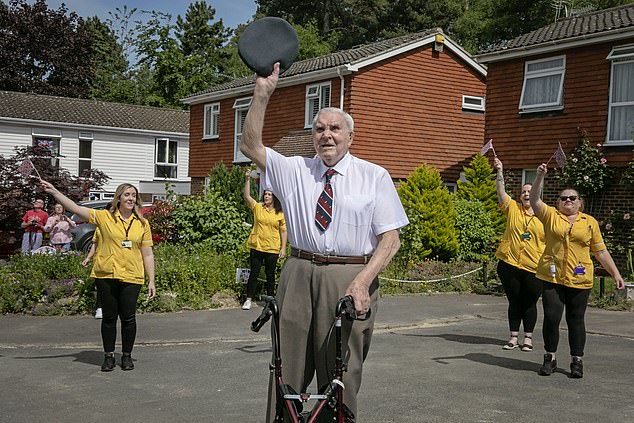 Sqn Ldr Stanley Booker, 98, waves his hat as the spitfire passes his home in Bracknell

G-ILDA also managed to include the Blind Veterans UK home in Ovingdean, East Sussex, as well as doing three flypasts at our designated care home, Care For Veterans in Worthing, West Sussex, before returning to base.

The Worthing flight was particularly poignant for Care For Veterans resident Len Gibbon, who learned the war was over in Europe when a Spitfire pilot landed and shouted the news.

That was the last time Mr Gibbon, 96, saw one – until yesterday, thanks to the Daily Mail. He described the moment as ‘really special’, adding: ‘I’m here surrounded by wonderful people, on a sunny day, with a Spitfire flypast… now I just need my whisky!’

The home’s chief executive Andy Neaves said: ‘Thank you to all the Mail readers who nominated us. That recognition is fabulous, not just for residents but for staff too.’

Pilot Matt Jones, who was part of the team which flew the first round-the-world Spitfire last year, was delighted with the flypast. ‘I’ve had some wonderful moments in my career, including flying with two Battle of Britain aces,’ he said. ‘But that has to be right up there as one of the greatest honours.’