Aged just 16, Ro Allen was pushed to the ground in a church in Melbourne’s eastern suburbs, held down and had “the full exorcism” performed on them in an attempt to rid them of their queerness.

“Four men laying their hands on me, speaking in tongues, doing an exorcism. It was horrific,” says Victoria’s new Equal Opportunity and Human Rights commissioner. “I remember it being hours, but I’m sure it wasn’t that long.” 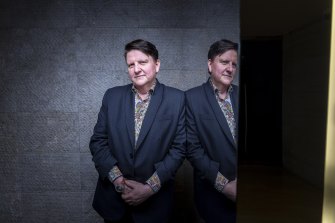 If you had told Allen then that they would one day help shape laws to protect the rights of 16-year-olds like their younger self – and now be a protector of other groups who continue to experience rights violations – “I would have said you were mad”.

“I can feel it in the back of my throat talking about it; there are so many LGBTIQ+ people who aren’t here any more because of conversion practices,” says Allen, who has known people lost to suicide after experiencing such “therapy”.

Their religious ordeal was far from the only time Allen, who is non-binary and the first high-profile public appointee to use they/them pronouns, has experienced first-hand what it can be like to be marginalised in Victoria.

After moving to Shepparton as a youth worker in their 20s and starting a group for same-sex attracted young people, Allen was physically abused and taunted. “I was beaten up, my car was graffitied, I had lemons thrown on my roof,” said Allen, 49.

Following an appearance on regional TV as the new youth worker in town: “Five queer kids came to see me the next week, it was like a had a tattoo on my head. They said ‘can you start a group?’”

Having done so, the backlash was fierce. It included receiving a card at the Violet Town home she shares with partner, Kaye Bradshaw, telling them their baby daughter, Alex (now 13) was a “devil child”.

That network of regional support centres became the Victorian Youth Affairs council, and the family now splits its time between Violet Town and Melbourne, allowing Allen to pursue the advocacy career that put them in the state’s top human rights role earlier this year. 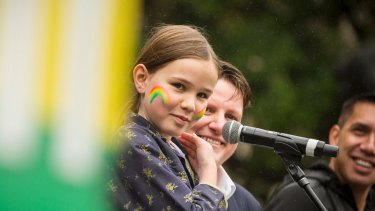 Ro Allen’s daughter, Alex, speaks out in support of the “Yes” vote at an Equal Love rally in 2017.Credit:Chris Hopkins

Allen says the job’s appeal was enhanced because human rights had become a flashpoint during the pandemic, with Indigenous, trans and disabled people’s rights pushed to the top of public consciousness – in part through debate about access and inclusion to vaccination among other services.

“Why wouldn’t you want this job right now? It’s the perfect storm: people are talking about their human rights, which gives you leverage to make change. What attracted me was the intersectionality – we have a lot of commissioners, seniors, gender equality, LGBTIQ. I saw this role as the kind of glue.

“You can be Aboriginal and have a disability, or be queer, we can look at a lot of these things at the same time, it’s not a choice. I came out of the LGBTIQ space, and that is an attribute that is in all those communities, we’re Aboriginal, multicultural, people with disabilities, rural and regional.

“The next step for me was how do I take that [intersection of factors] to a bigger platform,” Allen said.

I don’t know why toilets [and who is allowed in female ones] send people into hysterics. Every toilet at home is a gender-shared toilet.

Employing more women of colour at the commission is already a priority for Allen, who acknowledges that coloured women, Aboriginal women and women with disabilities still do not enjoy the same privileges as white women.

“There’s [ongoing] white privilege. Until we acknowledge that, we don’t have equality; there’s the bamboo ceiling all these other ceilings. We need to check ourselves,” they said.

It bothers Allen that human rights complaints from Aboriginal people are “really low”, because it might indicate a perception the system does not deliver tangible results for them. Allen, wants to be as engaged as possible in the development of a treaty with Indigenous Victorians.

They also want to reduce continuing “demonisation” of transgender people. Having spent six years in their previous role trying to answer the question of why trans people still experience so much stigma, “I didn’t come up with an adequate answer”.

“It is very similar to the way gay and lesbian people were demonised 40 or 50 years ago; until you met one or had a relative or someone in the family come out as gay or lesbian,” Allen said.

Stereotypes, especially around bathroom use, remain a problem.

“I don’t know why toilets [and who is allowed in female ones] send people into hysterics,” Allen said.

“Every toilet at home is a gender-shared toilet … [but discrimination about using them] is something you confront every day as a non-binary person.”

Allen was once hit with a handbag by an older woman in a ladies’ toilet who assumed they were a man. They were born biologically female, but do not correct those who mis-pronoun them and are sometimes called “he” or “she” right through meetings – “people can pronoun me as they see me”.

Allen is in favour of “single-cell, all-gender, all-ability” toilets to which anyone can have access. They want them closed in, wall-to-floor, to stop cameras being stuck under cubicles, which is a problem for trans people.

“People say, ‘Oh trans people are going to attack me in the toilets’, [but] often it’s trans people getting attacked,” said Allen. Single-cell, all outward-facing toilets would suit everyone, though some men may not like them “because they may have to queue in a way they haven’t had to – there probably will be pushback.

“But this is a human need, we just need to get it done.”

As Victoria continues its nation-leading progress in the field of universal human rights, Allen’s early experience remains a driver.

“I’ve come to this job through lived experiences of discrimination; you experience it, and you go one way or another,” they said.

“Either you suppress and it forget about it, or you turn into an activist, and look where I ended up.”

Fascinating answers to perplexing questions delivered to your inbox every week. Sign up to get our new Explainer newsletter here.