Singapore: Thailand’s royal family has intervened to prop up the country’s sluggish COVID-19 vaccine rollout, signing off on a parallel procurement drive that has taken even the country’s health minister by surprise.

A royal order signed by Princess Chulabhorn, the sister of King Maha Vajiralongkorn, will allow a Bangkok medical facility that carries her name to begin importing alternative vaccines for distribution until the government of Prime Minister Prayut Chan-o-cha has enough to achieve its lofty ambition of inoculating 70 per cent of its 69 million people by year’s end.

King Maha Vajiralongkorn owns the company which is producing the AstraZeneca vaccine in Thailand.Credit:Getty Images

It is not the only intervention of the monarchy in the vaccine effort in Thailand, where total cases of the virus have more than quadrupled in the past two months and the death toll has climbed from less than 100 to more than 900.

Siam Bioscience, a company owned by the king’s Crown Property Bureau, is manufacturing the local supply of the Oxford/AstraZeneca on which the government is relying heavily.

But with fewer than 1 million people, mostly frontline workers, having been fully vaccinated so far, the royal-endorsed move to top up supply with doses from China’s state-owned Sinopharm highlights the failures in Thailand’s controversial response to the pandemic this year.

The vaccines from Sinopharm, which was on Friday given approval for emergency use by the Thai Food and Drug Administration, will be accessed and purchased and paid directly by the Chulabhorn Royal Academy, of which the princess is president. 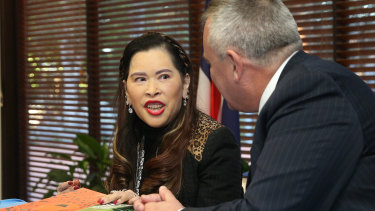 Health Minister Anutin Charnvirakul had been unaware of the royal order until it was announced. “But if it is a benefit to the country, we are ready,” he said.

Even taking into account the government’s shortcomings, the royal intervention is straight out of the monarchy’s playbook, according to Greg Raymond, a Thailand expert at the Australian National University.

“It really plays to the script of civilian politicians being hopelessly incompetent and that the monarchy is required from time to time to take things into their own hands,” he said. 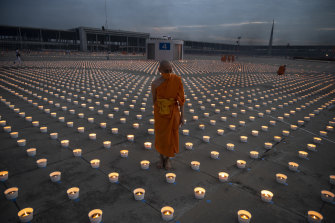 Buddhist novice monks light 180,000 candles during Vesak Day celebration at Wat Phra Dhammakaya temple on the outskirts of Bankok on Wednesday. Devotees had to attend the ceremony via Zoom this year because of COVID-19.Credit:Getty Images

With its overcrowded prisons in particular inundated with COVID-19, Thai authorities have faced accusations of complacency with its vaccine planning. Unlike most of its neighbours in south-east Asia, Thailand didn’t join the global vaccine scheme known as COVAX, explaining later that as a middle-income country it would have had to pay for the doses and couldn’t rely on them to arrive as quickly as those bought directly from the manufacturer.

Prayut’s government has promised a mass vaccination drive would kick off on June 7 when it has said the first 6 million of 61 million locally made AstraZeneca doses will be ready.

It has been under fire, though, not only for the slow speed of the delivery but for the choice of vaccines themselves. 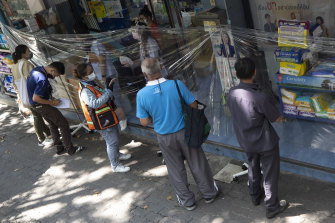 Customers order medicines through a protective plastic sheet at a pharmacy in Bangkok on Thursday.Credit:AP

Former prime ministerial candidate Thanathorn Juangroongruangkit was an early critic of the government’s preparedness to vaccinate the population, questioning the dependence on the royal-owned Siam Bioscience. That wasn’t received well, leading him to be charged in March under lese-majeste law, the royal defamation legislation that has been invoked against dozens of pro-democracy campaigners in the past year and carries a jail sentence of 15 years.

While short supply is troubling the majority of countries across south-east Asia polls also warn of hesitancy among the public about the vaccines sourced by the government – the Sinovac Biotech imported from China as well as AstraZeneca.

Thitinan Pongsudhirak, a political scientist at Chulalongkorn University in Bangkok, said this week Thailand had blown an opportunity to restore its reputation on the world stage with its vaccine management.

“Why don’t we have more vaccine options in sufficient quantities?” he said on Twitter. “Everyone wants the best vaccine.”

For the middle class and wealthy that may be achievable, with Thai tour companies beginning to offer packages to travel from to the United States to be vaccinated, starting from 75,000 baht ($3100). But for most that is out of their range.

The only other fast track to the jab has been living in Phuket. While Thailand limps along with one of the lowest vaccination rates in the region, the holiday island is being prioritised in the name of tourism under the government’s so-called “sandbox” model.

Phuket Governor Narong Woonciew says 50 per cent of residents have received both shots, keeping alive hopes of it reopening to foreign tourists on July 1.