Former Seattle City Council candidate Ari Hoffman on the efforts by elected officials to cut police funding amid the spike in homicides.&nbsp;

A Texas mother and her boyfriend have been arrested and charged in the murder of the woman’s 8-year-old son.

The Irving Police Department arrested Leslie Curtis, 29, and her boyfriend Codie McCrory, 30, on Friday after they were dispatched to an unconscious person call and found the boy, Delmor Best-Curtis, lying on a bed “unresponsive” at the Magnuson Hotel, authorities said in a press release.

“Officers quickly observed bruising, cuts, burns and bite marks all over the victim’s body,” an affidavit obtained by Fox News states. “The victim had blood on his head, facial swelling and an obviously broken arm.”

Curtis and McCrory, who had been in a relationship for less than a year, abused the boy for at least 10 days. The couple was living at the hotel, and Delmor was not attending school, police said in the press release.

“There are evil people in this world,” Irving Police Officer Robert Reeves said, according to Fox 4 KDFW Dallas-Forth Worth. “And this is some of the side effects of them being around children of what happens.”

He added that police could “tell he was choked before because there were fingernail marks around the neck.”

“Some of them are so graphic, it’s kind of disgusting to even talk about them,” Reeves said.

McCrory pushed the 8-year-old twice, causing him to hit his head twice. He was knocked unconscious by the second time, Reeves told reporters, according to Fox 4. 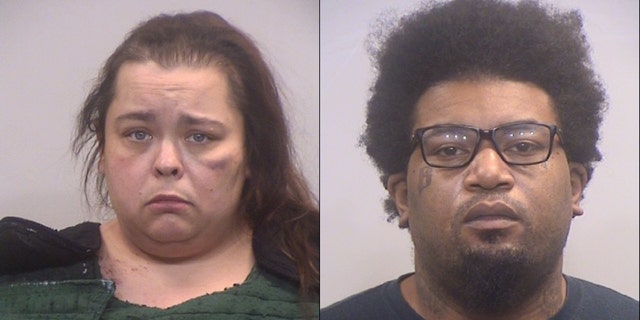 McCrory tried to put the boy “in the shower to get him to wake back up, but that was unsuccessful,” Reeves said.

Curtis accused McCrory of abusing her, as well, according to the affidavit, which describes Curtis as having “a black right eye and significant bruising to the left side of her face.”

“Curtis had seen the defendant kick the victim in the head on more than one occasion,” the affidavit states.