A prominent Melbourne solicitor accused of sexually assaulting a teenage girl has been found guilty of contempt of court for changing the locks at his Queen Street legal practice to stop a manager appointed by the Victorian Legal Services Board taking control of his firm.

Glenn Thexton, 42, who was suspended from practising in October because of the assault allegations, will avoid prison after his 30-day custodial sentence for contempt was fully suspended.

The Supreme Court of Victoria found that Thexton had deliberately obstructed attempts by the manager – a partner from law firm Thomson Geer – to access the practice, after he paid the locksmith and authorised the job to proceed. 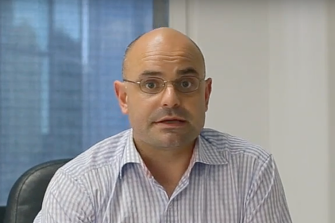 Barrister Nicole Papaleo, who represented the Victorian Legal Services Board, said Thexton’s conduct was “an example of one of the most serious forms of contempt”, which warranted a custodial sentence.

Ms Papaleo said Thexton had compromised his clients, inconvenienced the court and defied the authority of the Victorian Legal Services Board.

“He was, or is, a lawyer who is familiar with the higher standards imposed upon him,” Ms Papaleo said.

Thexton, who has delivered furniture since his practicing certificate was suspended last year, told the court he had no criminal history and an unblemished professional record since becoming a lawyer in 2003.

He claimed it was disproportionate for the board to seek a custodial sentence.

Justice Cameron Macaulay sentenced Thexton to 30 days in prison, wholly suspended, before ordering him to pay 75 per cent of legal costs.

In October last year, the Victorian Legal Services Board filed an injunction in the Supreme Court to prevent Thexton from providing any legal services, after he was charged with one count of sexual assault.

Police allege he groped a 17-year-old girl outside a kebab shop on King Street in September 2019, with the matter due to be next heard in the Melbourne Magistrates Court in January next year.

At the time, Thexton disputed the charge, saying he was moving past the teen in a stairway and that any contact amounted to a “glance” rather than a grabbing motion as police allege.

He also claimed to be the subject of a broader conspiracy by Victoria Police, which he said had targeted him “because I know too much”.

He said the reason the Legal Services Board sought to suspend his licence was because of various disagreements he’s had with the government, including his work on the case of a convicted murderer, one of the men responsible for the 1986 bombing of the Russell Street police headquarters.

At the time, Thexton told the court Nolch graffitied the memorial as a “political statement” because he believed feminists had “hijacked” Ms Dixon’s death and turned it into a women’s rights issue.

After Nolch wrote a Google review blaming Thexton and his firm for what he viewed as poor legal representation, Thexton filed a defamation action against him in the County Court in February 2019.