London: A super-trawler that banned from fishing in Australian waters is being investigated after reportedly dumping more than 100,000 dead fish in the Atlantic Ocean.

The Dutch-owned trawler FV Margiris – the world’s second-largest fishing vessel – spilled its catch after its net ruptured, according to the industry group that represents the vessel’s owner. 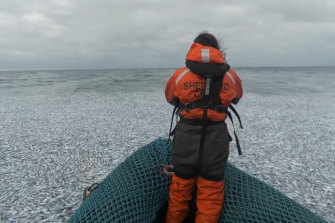 Sea Shepherd estimated the super-trawler left as many as 100,000 dead fish.Credit:Sea Shepherd

In a statement, the Pelagic Freezer-Trawler Association (PFA) said the spill occurred “involuntarily” on Thursday and was a “very rare occurrence”.

But French authorities have opened an investigation after an environmental group disputed this account, saying it was an illegal discharge.

Annick Girardin, France’s maritime minister, called the images of the dead fish “shocking”, and has asked the country’s national fishing surveillance authority to launch an inquiry.

The vessel, which is 14 times larger than UK fishing boats, was banned from Australian waters for two years in 2012 due to concerns about its effect on local stocks. It was later accused of plundering fish from the sea around Britain before Brexit. 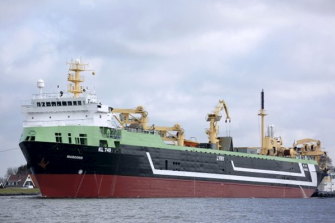 The French arm of the campaign group Sea Shepherd first published images of Margiris’ spill, showing the ocean’s surface covered by a dense layer of blue whiting – a sub-species of cod used to mass-produce fish fingers, fish oil and meal.

Sea Shepherd France said it did not believe the incident was accidental, but rather an attempt by the trawler to discharge a type of fish that it did not want to process. It is a practice known as discharging bycatch, which is banned under EU fishing rules.

The Margiris, which is 142 metres long with a net 594 metres in length and 200 metres wide, dwarfs most fishing boats.

The Margiris can take in more than 250 tons of fish a day.

In 2019 the Magiris was fishing off the Sussex coasts in waters designated as a bass hatchery, which are overfished. The UK’s Marine Management Organisation boarded the vessel but found no infringement of fishing regulations.

Greenpeace protesters say they confronted the Margiris – previously known as Abel Tasman – in West Africa in 2012 and in the Netherlands and Australia in 2013. The campaign resulted in it being banned from Australian waters.

Data by marinetraffic.com on Friday showed the vessel was still engaged in fishing activities off France’s coast.

The fish discharged on Thursday would be deducted from the Margiris’ quota, PFA said.

“The Margiris has implemented drastic measures to prevent similar accidents in the future,” it said, without saying what they were.