A cruise ship carrying 2,000 passengers was greeted by angry protesters who threw stones and screamed at the crew as they tried to dock in Reunion Island because they thought the ship was infected with coronavirus.

Police were forced to use tear gas to end the ugly clash which saw 30 locals from the French Republic, east of Madagascar, gather as the Sun Princess docked on March 1.

Protesters were concerned people on board could be carrying coronavirus after it docked in Thailand in early February.

The group refused to let passengers, who are mostly from Australia and New Zealand, disembark the ship, and threw bottles and rocks at security who tried to usher people past the dock.

They were eventually stopped by police, who used tear gas to get the group under control. 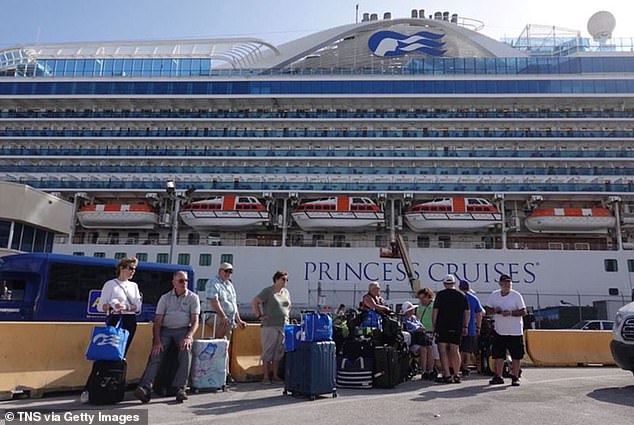 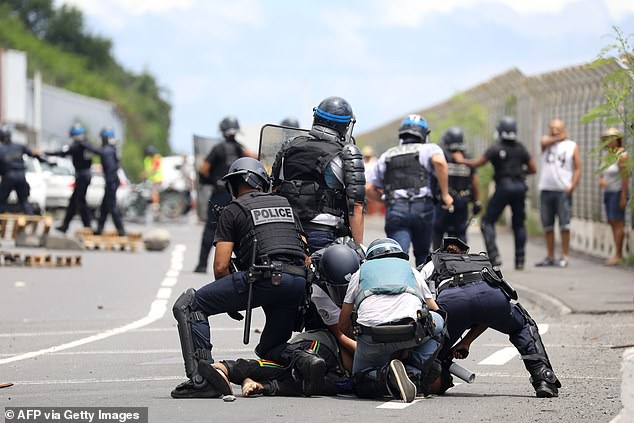 French police officers arrest a demonstrator in Le Port on March 1, 2020, as people protest against the arrival of the passengers of the Sun Princess cruise ship

There have been no confirmed – or suspected – cases on board the ship and passengers were furious at the treatment they received, one couple told NZHerald.

Rod Pascoe, 67, and his wife embarked on the seven week trip of a lifetime on January 20, leaving Fremantle in Western Australia for a round-trip to Singapore, Thailand, the Seychelles, Tanzania, Madagascar, South Africa and Reunion Island.

On February 13, the ship was refused entry to Madagascar for the same reason.

The cruiseliner had recently docked in Thailand and authorities were concerned passengers would still be within the 14 day incubation period for the disease. 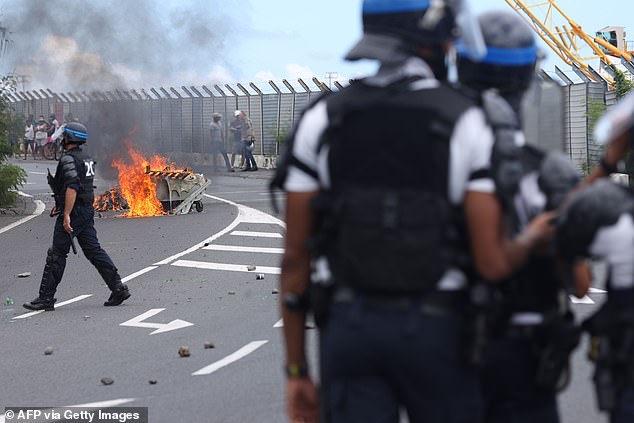 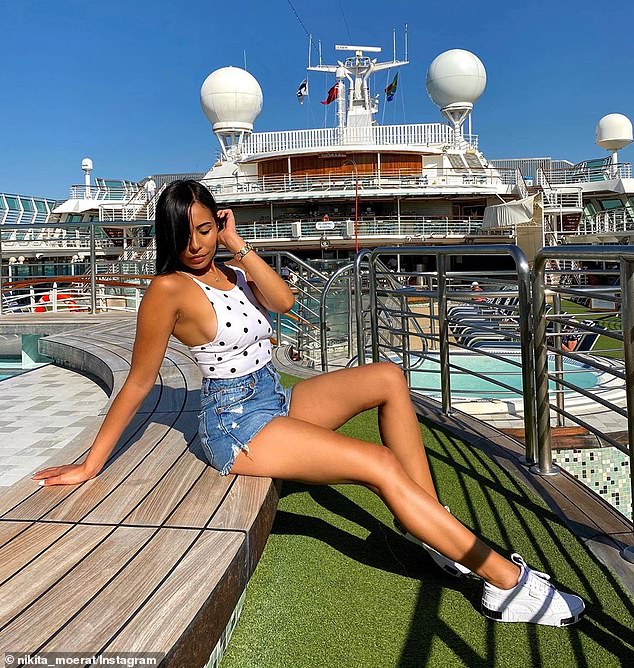 More than 30 days has passed since the stopover in Thailand. Passengers believe there was no reason for the reception they received when they arrived in the Pointe des Gallets port on Sunday morning.

About 300 passengers were still able to visit the island because they left through a different exit.

But Mr Pascoe, who is from New Zealand, said everybody on board was rattled by the experience.

‘Some passengers were very distressed and others absolutely steaming, fuming when they got back,’ Mr Pascoe said.

‘People feared for their safety.’

So far, more than 88,000 people have been infected with the disease across 60 countries. 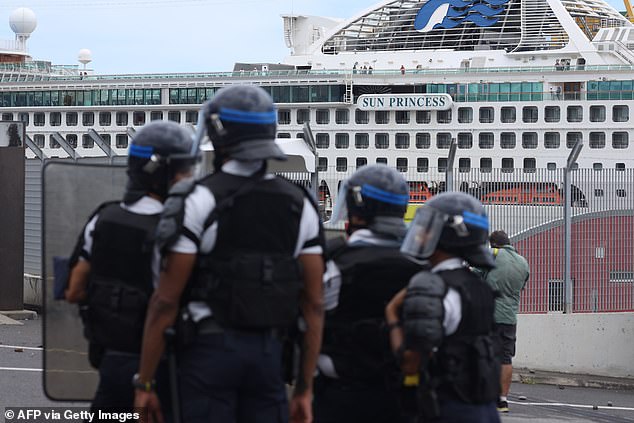 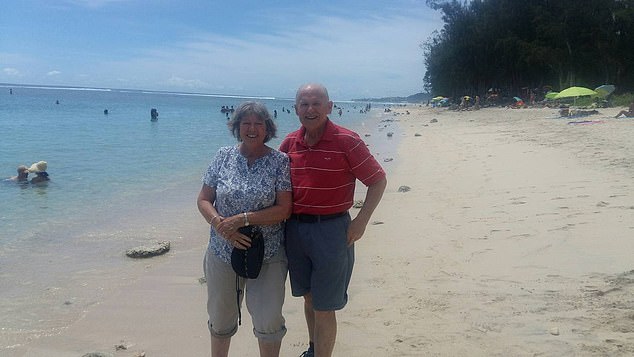 Rod Pascoe, 67, and his wife (pictured together) embarked on the seven week trip of a lifetime on January 20, leaving Fremantle in Western Australia for a round-trip to Singapore, Thailand, the Seychelles, Tanzania, Madagascar, South Africa and Reunion Island 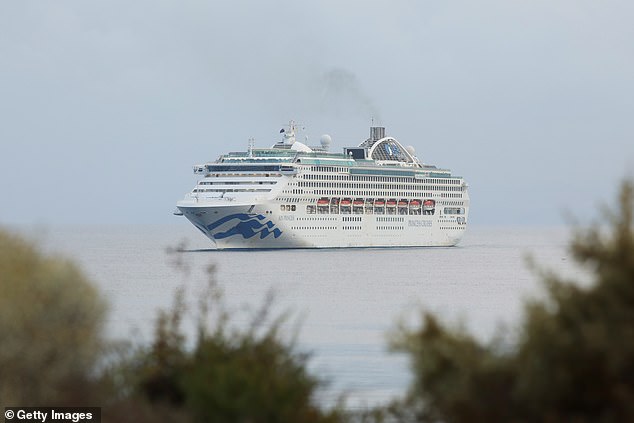 The death toll soared to 2,995 overnight.

Last month, passengers aboard the Diamond Princess cruise ship were quarantined in Japan following an outbreak on board.

More than 700 people on the ship caught the disease, including seven who have since died.

On Sunday, a 78-year-old man from Western Australia became the first Australian – and seventh passenger – to succumb to coronavirus.

Reunion Island hasn’t reported any confirmed cases of the disease among the 900,000 strong population, but concerns are mounting as global authorities warn of a potential pandemic.

Yannis Latchimy, a protester at the demonstration, told local media he simply wanted passengers to undergo thorough testing before mingling with his people.

‘Of course we are not against the arrival of tourists, they are necessary for the development of our economy. We just want to be sure that there is no risk of the coronavirus propagating,’ he said. 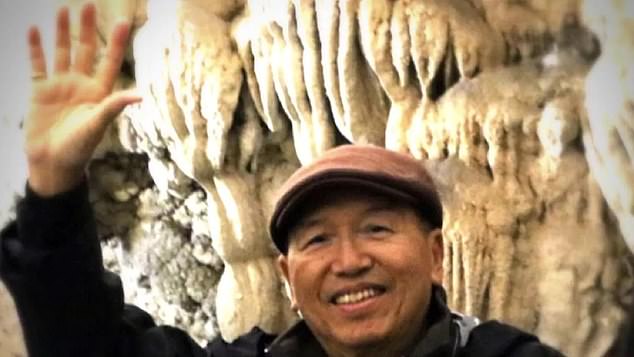 Travel agent and industry ‘legend’ James Kwan, 78, is Australia’s first fatality as a result of the coronavirus 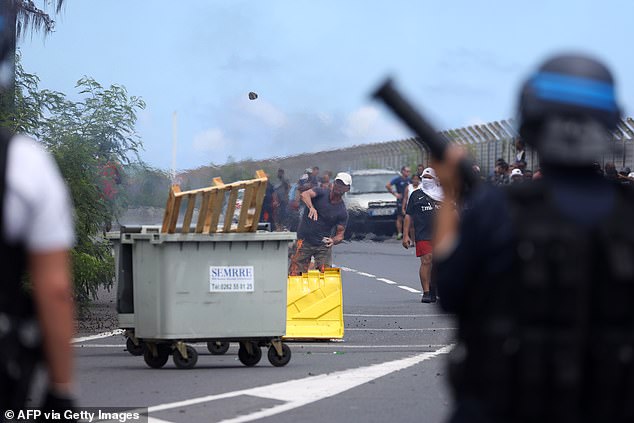 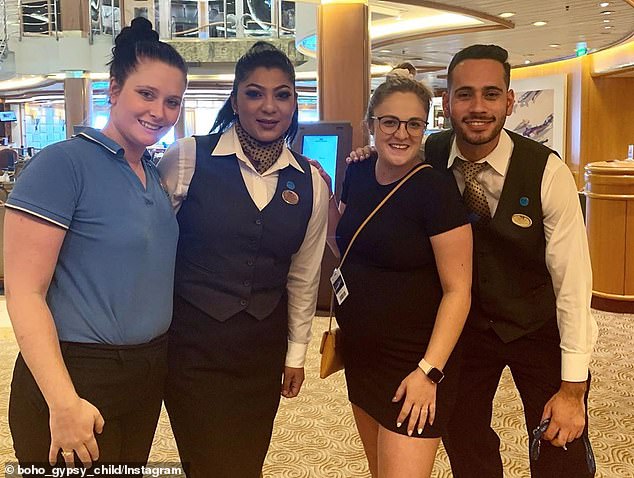 On board the ship, nobody is sick and there have been no concerns over coronavirus. (Pictured: passengers and staff on board the Sun Princess)

‘We don’t know if these people are sick, they were not tested. It is very dangerous.’

An employee of the regional health authority was also stationed at the port to offer face masks and coronavirus information packets to people disembarking the ship.

None of the tourists took the leaflets, locals reported.

The next stop for the cruise was supposed to be Mauritius, and the captain planned to travel there early after the treatment they received at Reunion Island.

But the local government withdrew permissions for the ship to dock there overnight, too.

Now they will begin the trip back to Fremantle, where the ship is scheduled to arrive on March 10. 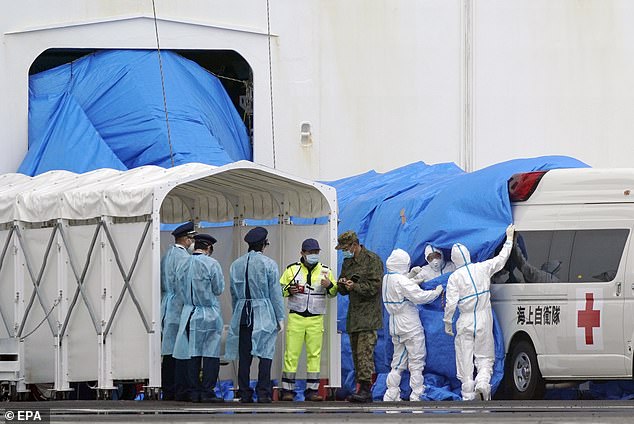 Three men aged 43, 53, and 35 who had recently travelled to China contracted the disease.

Two flew in from Wuhan while the other arrived in Sydney from Shenzhen, south China.

They were treated in isolation at Westmead Hospital.

A 21-year-old woman is identified as the fourth person to test positive for the illness in NSW.

The woman, a student at UNSW, flew into Sydney International Airport on flight MU749 on January 23 and presented to the emergency department 24 hours later after developing flu-like symptoms.

A man in his 40s is confirmed as the fifth coronavirus case in the state and a woman in her 50s as the sixth. Both returned to Sydney from Iran.

A Chinese national aged in his 50s becomes the first confirmed case of the coronavirus in Australia.

The man flew to Melbourne on China Southern flight CZ321 from Wuhan via Guangzhou on January 19.

He was quarantined at Monash Hospital in Clayton in Melbourne’s east.

A Victorian man in his 60s is diagnosed with the coronavirus.

He became unwell on January 23 – two days after returning from the Chinese city of Wuhan, the epicentre of the outbreak.

The man was confirmed as positive on January 29 and was subsequently seen by doctors at the Monash Medical Centre.

A woman in her 40s is found to have coronavirus.

She was visiting from China and mostly spent time with her family.

She is being treated at Royal Melbourne Hospital.

A woman in her 20s in Melbourne is found to have the virus.

Victorian man confirmed to have coronavirus after the 78-year-old was evacuated to Melbourne from a Darwin quarantine centre.

It is confirmed a young Victorian woman has tested positive for coronavirus after flying from Malaysia to Melbourne via Indonesia.

Queensland confirms its first case after a 44-year-old Chinese national was diagnosed with the virus. He is being treated at Gold Coast University Hospital.

A 42-year-old Chinese woman who was travelling in the same Wuhan tour group as the 44-year-old man tests positive. She is in Gold Coast University Hospital in stable condition.

An eight-year-old boy was diagnosed with coronavirus. He is also from the tour group where the other Queensland cases came from.

A 37-year-old man, who was a member of a group of nine Chinese tourists in quarantine on the Gold Coast, also tested positive.

A 37-year-old woman was diagnosed with coronavirus from the same travel group that flew to Queensland from Melbourne on January 27.

Two Queensland women, aged 54 and 55, tested positive for COVID-19 and will be flown to Brisbane for further treatment.

A 57-year-old woman from Queensland also tested positive for the virus.

A 63-year-old woman was confirmed to have the virus after returning to the Gold Coast from Iran.

A Chinese couple in their 60s who arrived in Adelaide from Wuhan to visit relatives are confirmed to have coronavirus.

A 24-year-old woman from South Australia was transferred to Royal Adelaide Hospital.

A 78-year-old man from Western Australia was transferred to Sir Charles Gairdner Hospital in Perth. On February 28, he was taken into intensive care in a ‘serious’ condition.

The elderly man died in the early hours of the morning from the virus at Sir Charles Gairdner Hospital.

Of the cases in Australia, eight contracted the disease on the Diamond Princess cruise ship, which had gone into quarantine in the Japanese port of Yokohama.

They tested positive for the coronavirus after arriving at the Manigurr-ma Village Howard Springs facility in Darwin, and are now being treated in their home states.