Scotland on a knife edge: Nicola Sturgeon’s hopes of a Holyrood majority ‘are slipping away’ as election eve poll finds SNP faces LOSING seats and a majority of Scots want to stay in the UK – but other surveys say she could get MORE MSPs

Nicola Sturgeon’s SNP could miss out on an overall majority at Holyrood in Thursday’s elections amid a surge in support for the union in Scotland, a new poll suggested today.

A poll by Savanta suggests the First Minister could lose four seats to fall six seats short of control of the Scottish Parliament.

The same firm also found a majority of support for remaining in the Union if there was a second Scottish independence referendum.

Falling short of the 65 MSPs required for an outright majority would leave Ms Sturgeon needing another coalition with the pro-independence Greens and show how a bitter row with former boss Alex Salmond has hit the party’s ambitions.

However the news was tempered by more polls in Scotland today which suggest the SNP could achieve a narrow majority.

Both YouGov and Survation have an outright SNP majority, by three seats and just one seat respectively.

It sets the stage for a dramatic vote on Thursday that will set the direction of travel in Scottish politics for the next five years.

However the polls are a blow for Mr Salmond. Only YouGov show his new Alba Party picking up any seats, and it predicts just a single one from the list vote. 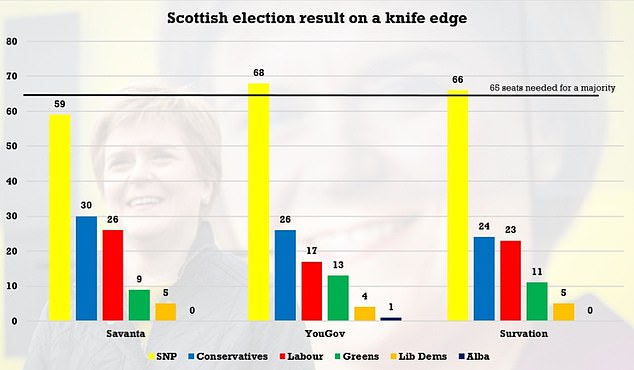 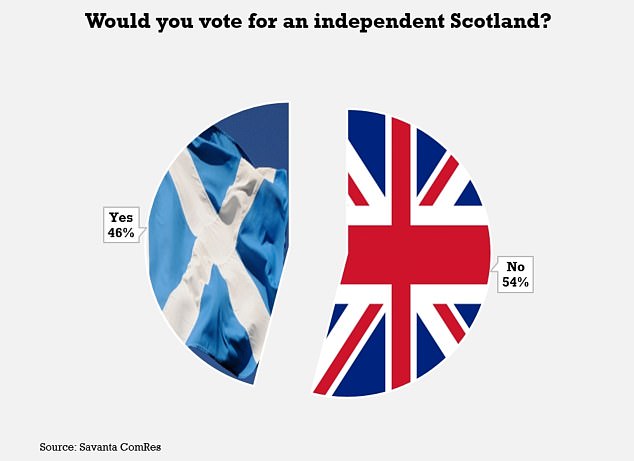 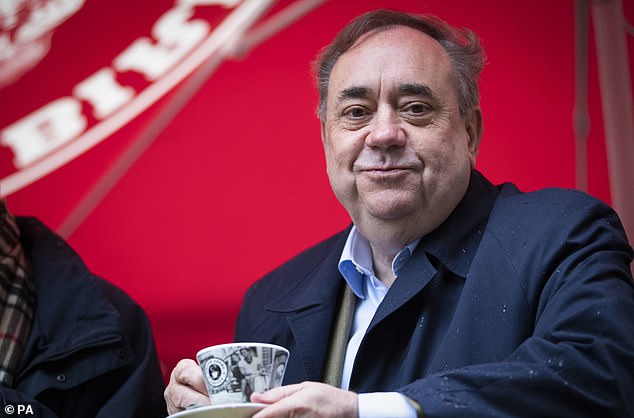 The polls are a blow for Mr Salmond. Only YouGov show his new Alba Party picking up any seats, and it predicts just a single one from the list vote.

How does the Holyrood election work?

On May 6 Scots will be electing 129 MSPs for Holyrood.

But unlike at Westminster, there is a form of proportional representation to decide who gets the seats.

There are two routes for MSPs to be elected, with each voter having two ballots to cast.

Specific ‘constituency’ MSPs are returned to represent the 73 constituencies in Scotland.

Those are ‘first past the post’ contests, the same as Westminster elections.

The second ballot is used to elect 56 ‘list’ members.

Each of the eight Parliamentary regions returns seven MSPs.

But in this instance, voters back parties rather than candidates.

The parties are then allocated a number of ‘list’ MSPs on the basis of their support – and they have a list of candidates by priority to take the seats.

The aim is to make the result more proportional.

However, there would still be a pro-independence majority in the Scottish Parliament as the Scottish Greens are projected to return nine MSPs, three more than in 2016, with 9 per cent of the list vote.

The poll found support for Scottish independence is split, with 50 per cent saying they would vote No if a referendum were held tomorrow, 42 per cent Yes and the remaining 8 per cent said they do not know.

When those who are undecided are excluded, support for the union is at 54 per cent and backing for independence at 46 per cent.

According to the poll, the Scottish Lib Dems will secure 8 per cent of the constituency and 6 per cent of the list vote which would see them return five MSPs, no change on 2016.

Alex Salmond’s Alba Party would return no MSPs, according to the poll of 1,001 Scottish adults aged 18 or over which was carried out between April 30 and May 4.

It comes after a survey for The Times, published on Tuesday evening, suggested the SNP is set for a four-seat majority.

The final study by YouGov for The Times of 1,144 Scots, released just hours before the last televised debate, put the SNP on 52 per cent in the constituency and 38 per cent on the regional list, and suggests the Scottish Greens will take 13 per cent of the regional vote.

It also found 45 per cent of people would vote Yes in a referendum on Scottish independence while 55 per cent would vote No, when undecided voters are excluded. 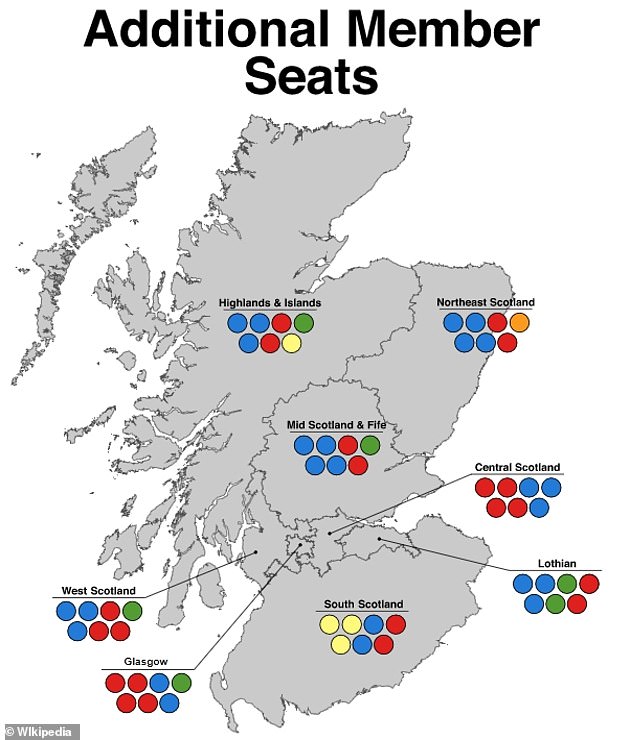 Scotland operates a version of proportional representation, and Alba is only standing ‘list’ – or ‘additional’ MSP – candidates rather than running in the first-past-the-post constituency contests that could have inflicted more serious damage to the nationalists. Pollsters say that means it is more likely to hurt opposition parties, who typically end up with most of the list seats. The chart shows the result from the last Holyrood election in 2016

Modelling by polling expert Professor Sir John Curtice has the SNP on 68 seats, a majority of four, while the Greens will take 13 seats, more than double their current haul of five.

A seat for Mr Salmond’s party would see Eva Comrie take her place in Holyrood among 81 other independence-supporting MSPs.

The Scottish Tories, according to the poll, are set to win 26 seats, down five from the last election, but will retain a tight hold on second place as Labour could drop to 17 seats – losing seven.

Meanwhile a poll for The Courier, by Survation, projects the SNP will return 66 MSPs and the Scottish Conservatives 24.

The Survation poll was based on responses from 1,008 adults in Scotland and was carried out between April 30 and May 4.

Commenting on The Times poll, SNP depute leader Keith Brown said the outcome of the election is on a “knife-edge”.

He said: “Anything less than both votes for the SNP risks leaving Scotland’s future in the hands of Boris Johnson and the Tories instead of the safe hands of Nicola Sturgeon.”