It’s behind you! Hilarious moment an inquisitive ostrich upstages Spanish politician during a TV interview – but he is too busy talking to notice

Hilarious footage shows an ostrich curiously lingering behind a Spanish politician who does not notice the bird and keeps delivering his speech.

The video shows Miguel Angel Revilla, the President of Cantabria in northern Spain, speaking at a press conference for the reopening of Cabarceno Natural Park zoo when an ostrich appears behind him.

The inquisitive bird opens and closes its beak as it looks fascinated at all the people gathered for the press conference. 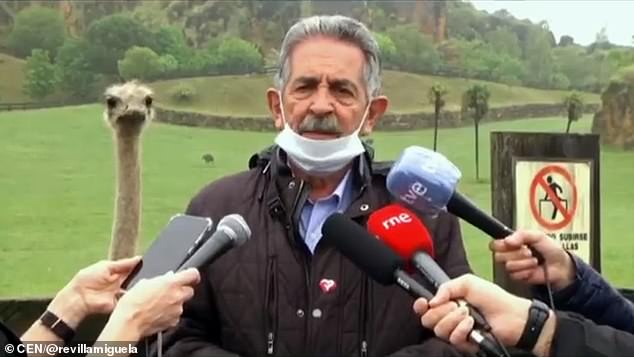 Oblivious to the ostrich Mr Revilla keeps talking seriously about the reopening of the park being one of the next steps to restoring the economy.

He tells Spanish reporters: ‘The pandemic is controlled.’

The regional president saw the funny side and posted a photo of the ostrich with a picture of Homer Simpson in an uncannily similar situation.

He captioned the photo: ‘The Simpsons already predicted it.’ 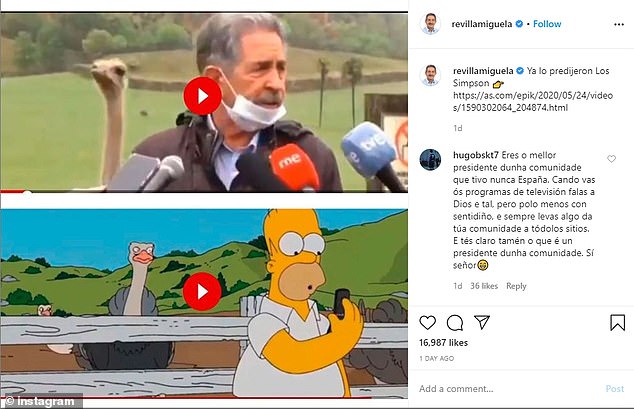 After the regional president saw the video he posted a picture of with a similar scene from the Simpsons and captioned it: The Simpsons already predicted it

The video was shared on social media and trended in Spain with 674,000 views.

Becario Tuiter said: ‘Am I the only one worried the animal will hit him with its beak?’

Jesus Cardiel commented: ‘I think the ostrich wants to give her opinion too about the situation she is going through.’

Spain has 235,772 confirmed coronavirus cases and a death toll of 28,752, according to the latest figures from Johns Hopkins Coronavirus Resource Centre.