‘We have docking’: SpaceX Dragon capsule safely arrives at the ISS in historic moment for human spaceflight

SpaceX delivered two astronauts to the International Space Station (ISS) for NASA on Sunday, following up a historic liftoff with an equally smooth docking in yet another first for Elon Musk’s company.

With test pilots Doug Hurley and Bob Behnken poised to take over manual control if necessary, the SpaceX Dragon capsule pulled up to the station and docked automatically, no assistance needed.

‘Soft capture,’ the moment when the spacecraft makes first contact and starts latching with the target vehicle, occurred at 10.16am ET

It was followed a few minutes later by ‘hard capture’ when an airtight seal was completed.

‘We copy docking is complete,’ said a member of the crew. ‘It’s been a real honor to be a small part of this nine year endeavor since the last time a United States spaceship has docked with the International Space Station.’

It was the first time a privately built and owned spacecraft carried astronauts to the orbiting lab in its nearly 20 years. 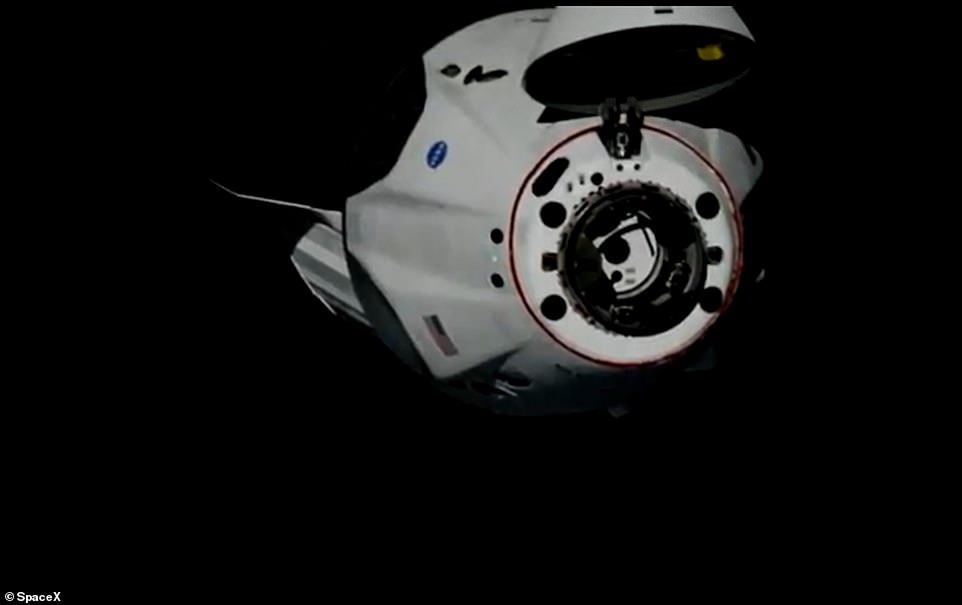 The SpaceX Dragon capsule pulled up to the station and docked automatically, no assistance needed 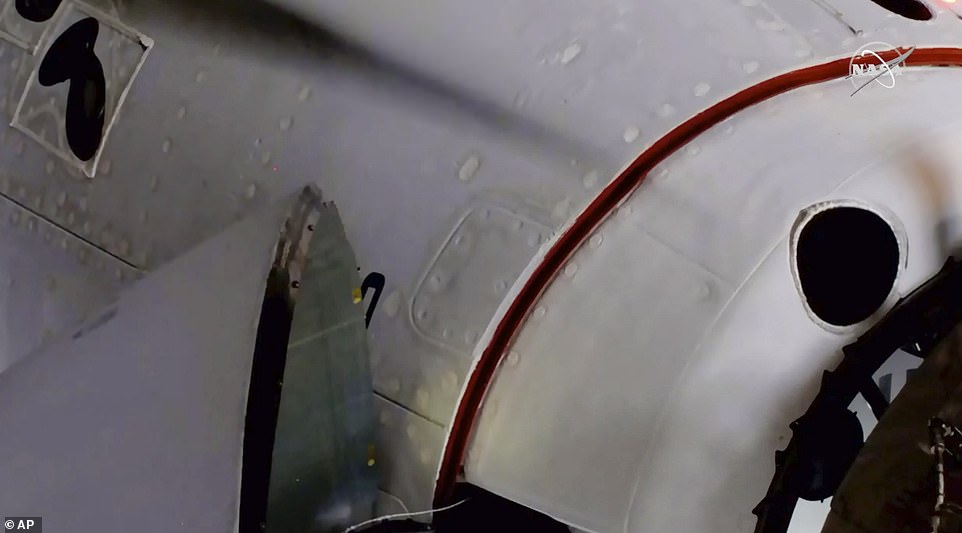 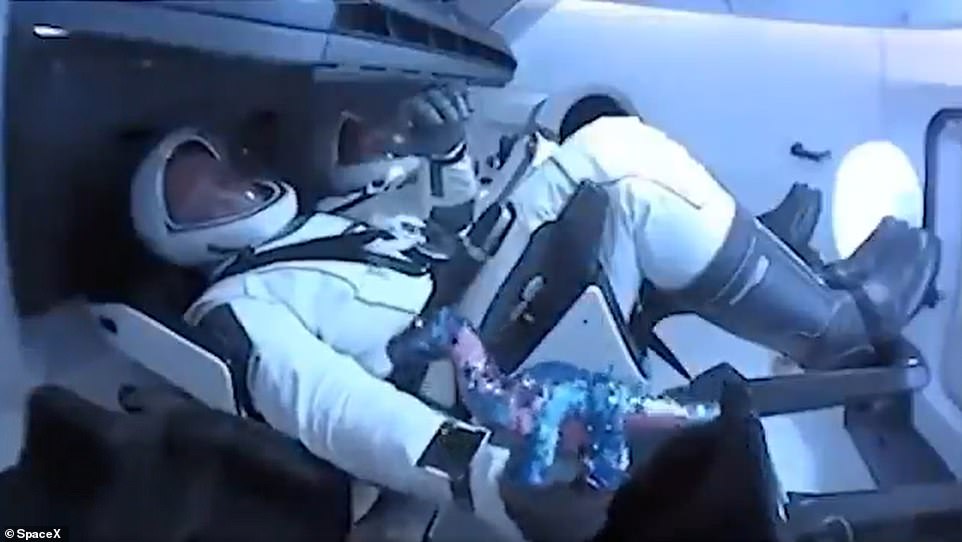 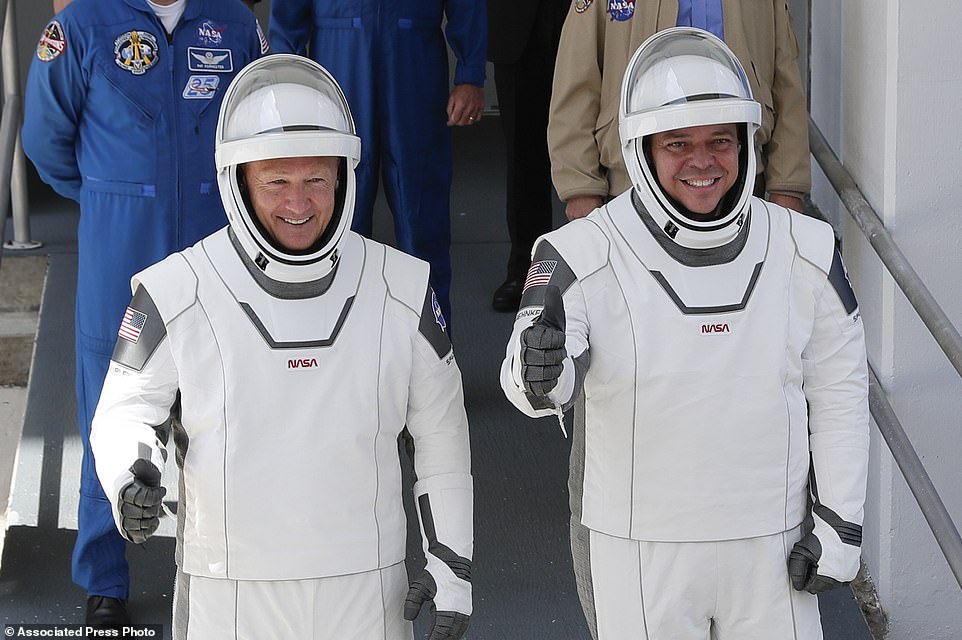 Hurley (left) and Behnken (right) walk out of the Neil A. Armstrong Operations and Checkout Building on their way to Pad 39-A, at the Kennedy Space Center in Cape Canaveral, Florida, on Saturday

Next, the vestibule between the Dragon and the ISS will be pressurized and the hatch will then be opened, in about an hour.

NASA considers this the opening volley in a business revolution encircling Earth and eventually stretching to the moon and Mars.

The docking occurred just 19 hours after a SpaceX Falcon 9 rocket blasted off Saturday afternoon from Kennedy Space Center, the nation´s first astronaut launch to orbit from home soil in nearly a decade.

Thousands jammed surrounding beaches, bridges and towns to watch as SpaceX became the world´s first private company to send astronauts into orbit, and ended a nine-year launch drought for NASA.

A few hours before docking, the Dragon riders reported that the capsule was performing beautifully. Just in case, they slipped back into their pressurized launch suits and helmets for the rendezvous.

The three space station residents kept cameras trained on the incoming capsule for the benefit of flight controllers at SpaceX headquarters in Hawthorne, California, and NASA´s Johnson Space Center in Houston.

Gleaming white in the sunlight, the Dragon was easily visible from a few miles out, its nose cone open and exposing its docking hook as well as a blinking light. The capsule loomed ever larger on live NASA TV as it closed the gap.

Hurley and Behnken took over the controls and did a little piloting less than a couple hundred meters out as part of the test flight, before putting it back into automatic for the final approach. Hurley said the capsule handled ‘really well, very crisp’. 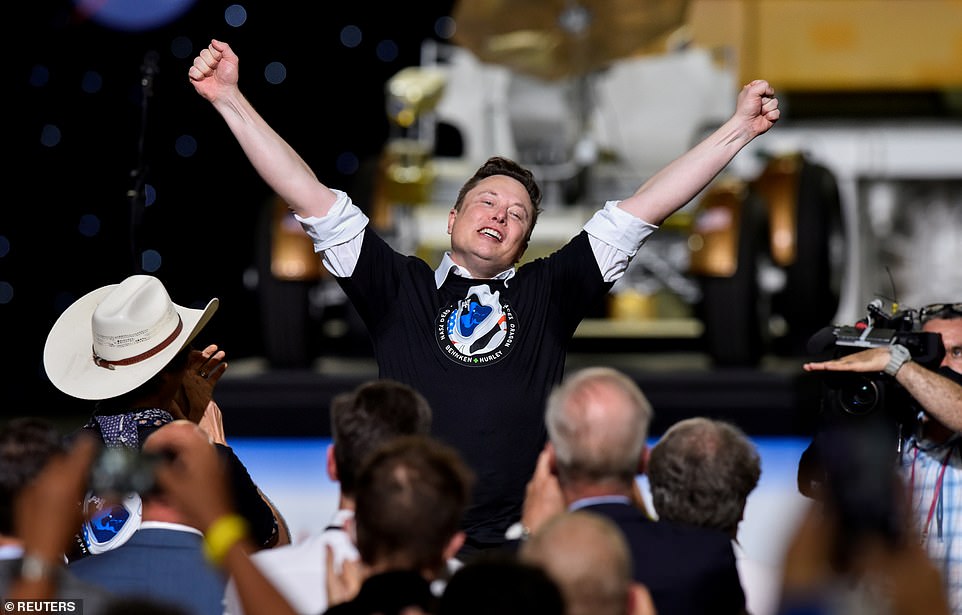 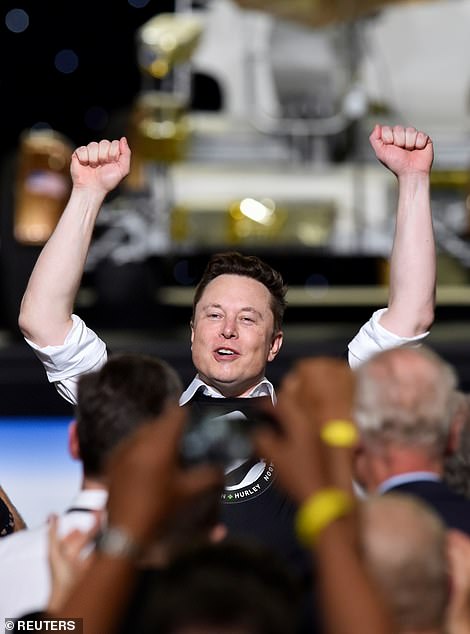 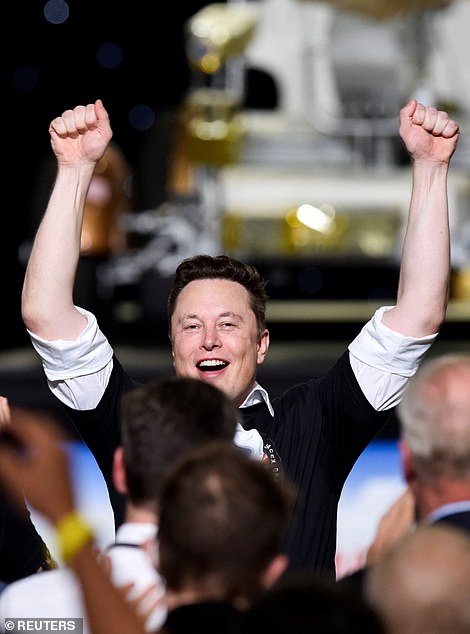 Speaking yesterday, Musk (pictured celebrating) said the mission is the ‘first step on a journey that would see humans become a multi-planetary species’ 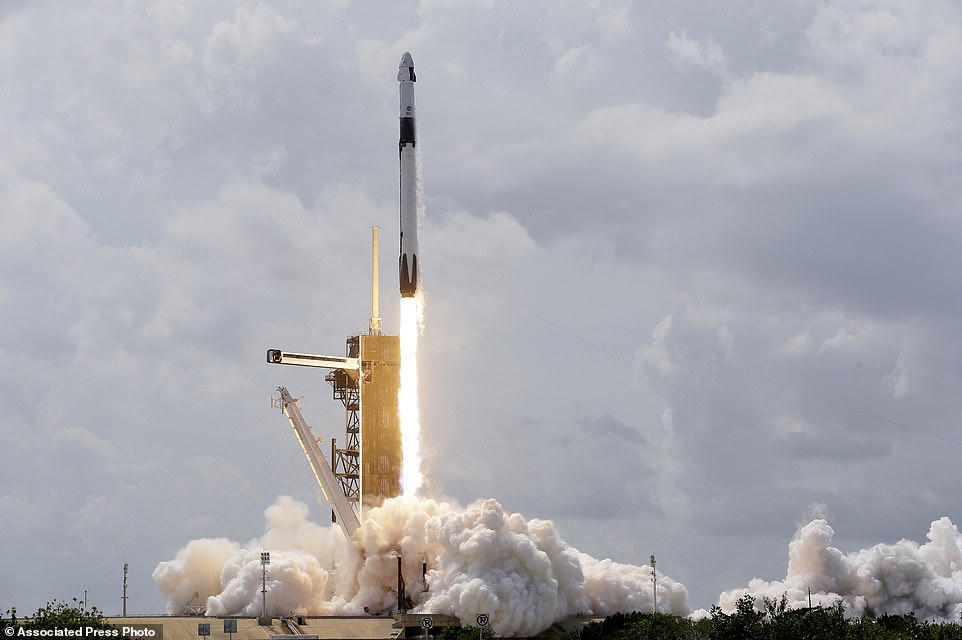 The SpaceX Falcon 9, with NASA astronauts Hurley and Behnken in the Crew Dragon capsule, lifts off from Pad 39-A at the Kennedy Space Center on Saturday 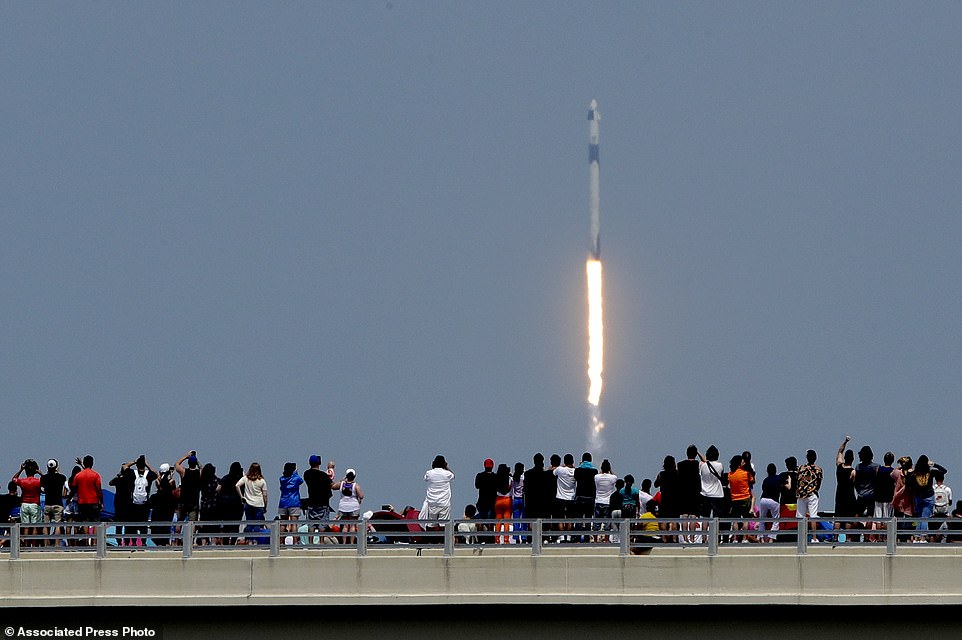 Spectators watch from a bridge in Titusville, Florida, as SpaceX Falcon 9 lifts off with Hurley and Behnken in the Dragon crew capsule

SpaceX and NASA officials had held off on any celebrations until after Sunday morning´s docking – and possibly not until the two astronauts are back on Earth sometime this summer.

NASA has yet to decide how long Hurley and Behnken will spend at the space station, somewhere between one and four months.

While they’re there, the Dragon test pilots will join the one US and two Russian station residents in performing experiments and possibly spacewalks to install fresh station batteries.

In a show-and-tell earlier Sunday, the astronauts gave a quick tour of the Dragon´s sparkling clean insides, quite spacious for a capsule. They said the liftoff was pretty bumpy and dynamic, nothing the simulators could have mimicked.

The blue sequined dinosaur accompanying them – their young sons´ toy, named Tremor – was also in good shape, Behnken assured viewers. Tremor was going to join Earthy, a plush globe delivered to the space station on last year´s test flight of a crew-less crew Dragon. Behnken said both toys would return to Earth with them at mission´s end.

An old-style capsule splashdown is planned. After liftoff, Musk told reporters that the capsule’s return will be more dangerous in some ways than its launch.

Even so, getting the two astronauts safely to orbit and then the space station had everyone breathing huge sighs of relief.

As always, Musk was looking ahead. ‘This is hopefully the first step on a journey toward a civilization on Mars,’ he said Saturday evening.