Somali hotel siege that left 20 dead ends after more than 30 hours: Security forces rescue 106 hostages from inside Mogadishu’s Hayat after it was stormed by Islamists linked to al-Qaeda

Somali authorities have rescued 106 hostages and ended a deadly attack on a hotel in the capital in which at least 20 people were gunned down by Islamic militants.

It took Somali forces more than 30 hours to contain the gunmen who stormed Mogadishu’s Hayat Hotel on Friday evening in an assault that started with loud explosions.

On Sunday morning, the area surrounding the hotel was quiet and the roads blocked by a heavy security presence as emergency workers and bomb disposal experts sought to clear the premises of any explosives and remove rubble.

The hotel building sustained heavy damage during the gunfight between Somali forces and the militants, causing some parts of it to collapse and leaving many people frantic for their loved ones who were inside when the attack began.

Police commissioner Abdi Hassan Mohamed Hijar told reporters on Sunday that ‘106 people including children and women’ were rescued by security forces during the siege which ended around midnight.

As bullets and flames ripped through the hotel, security forces searched the property to bring civilians to safety, including three young children who hid inside a toilet.

‘The casualties mostly happened in the early hours of the attack, after that security forces spent time rescuing people individually and room by room,’ Hijar said.

Police have not yet given a detailed explanation of how the attack unfolded, and it remains unclear how many gunmen entered the hotel. 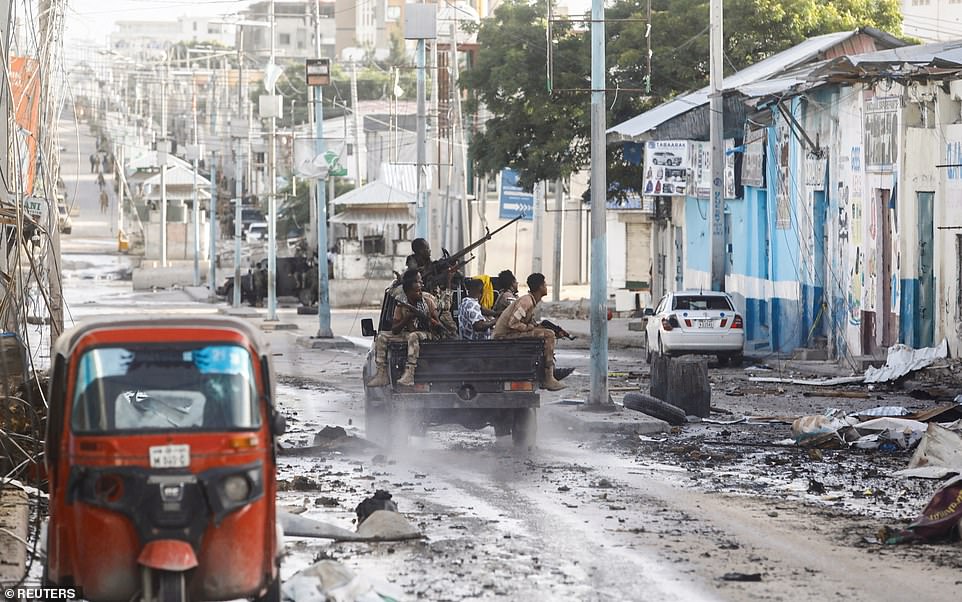 Armed security officials are pictured driving past part of the Hayat hotel, where terrorists barricaded themselves in an hours-long siege that saw 20 killed last night and today 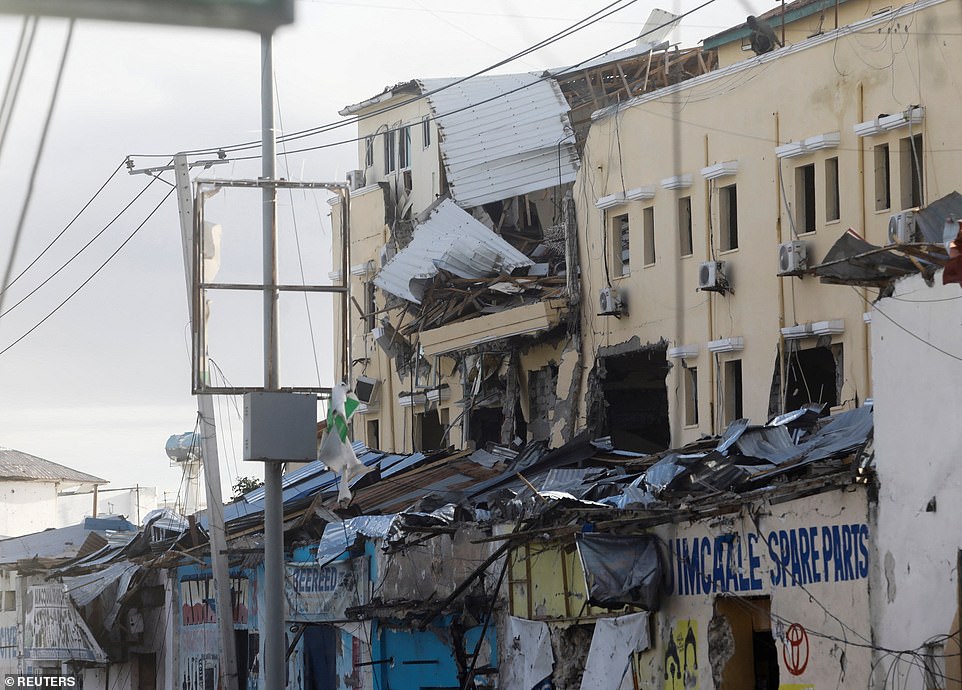 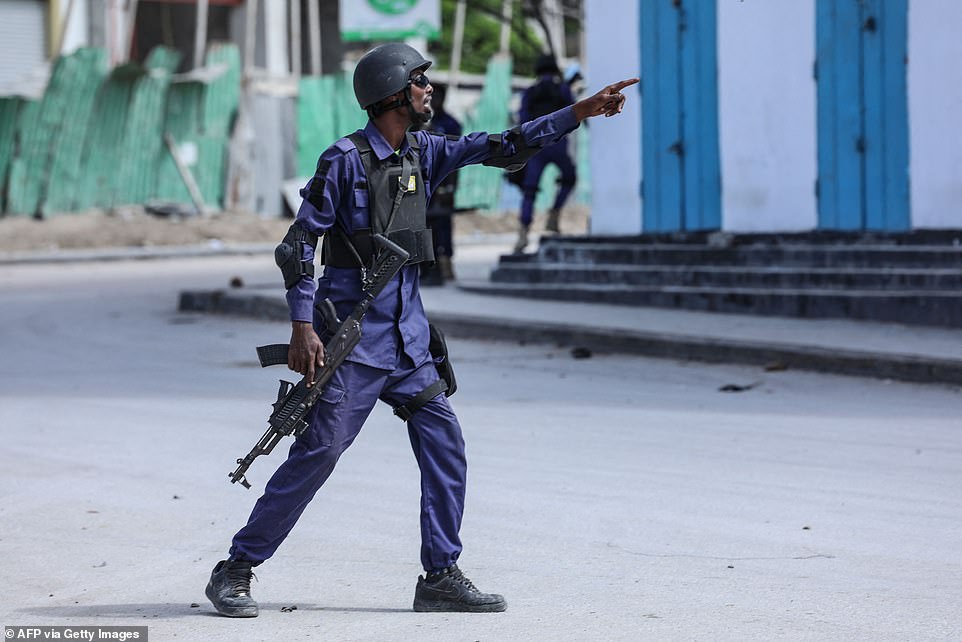 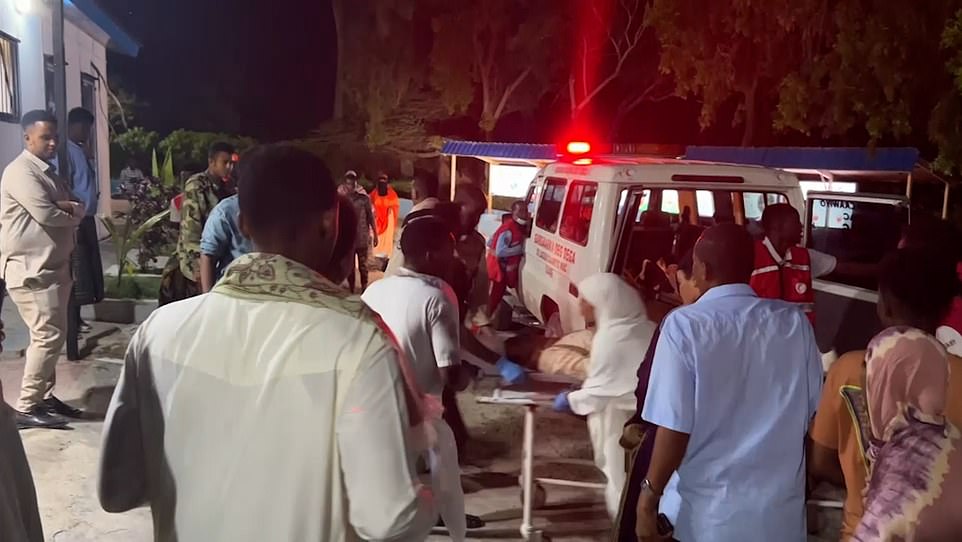 Al-Shabaab translates as ‘The Youth’ in Arabic. They first appeared as a radical youth wing of Somalia’s since disbanded Union of Islamic Courts – which was ousted from Mogadishu by Ethiopian forces in 2006.

Foreign jihadists are said to have travelled to the east African nation to join Al-Shabaab, which has approximately 7,000 to 9,000 troops.

The terror group has links to Al-Qaeda and is proscribed by both the US and UK.

While most Somalis are Sufis, Al-Shabaab supports the strict Wahhabi version of Islam inspired by Saudi Arabia.

It has enforced a strict version of Sharia Law in the areas it controls, including stoning to death women accused of adultery.

Businessman Muktar Adan, whose brother was inside the hotel when the attack started, told AFP he was waiting for permission to enter the premises and look for his sibling.

‘My brother was inside the hotel the last time we heard from him, but his phone is switched off now and we don’t know what to expect,’ he said.

Said Nurow, who heard the attack unfold, said he was very worried about his friend who was a guest at the property.

‘I hope… (he) is alive, he stayed in the hotel according to the last information we got from his sister,’ he told AFP, describing the mood as ‘tense’.

The Islamic extremist group al-Shabab, which has ties with al-Qaida, claimed responsibility for the attack, the latest of its frequent attempts to strike places visited by government officials.

The attack on the hotel is the first major terror incident in Mogadishu since Somalia’s new leader, Hassan Sheikh Mohamud, took over in May.

UN Secretary-General Antonio Guterres condemned the attack, according to a spokesman’s statement that said the UN supports the people of Somalia ‘in their fight against terrorism and their march towards peace’.

Al-Shabaab has been waging a deadly insurgency for 15 years against the fragile government in the Horn of Africa nation.

The director of Mogadishu’s main trauma hospital, Mohamed Abdirahman Jama, said the facility was treating at least 40 people wounded in the hotel attack and a separate mortar strike on another area of the capital.

Dozens of people gathered outside the four-storey hotel to discover the fate of loved ones.

‘We have been looking for a relative of mine who was trapped inside the hotel, she was confirmed dead together with six other people, two of them I know,’ said an anxious Muudey Ali. 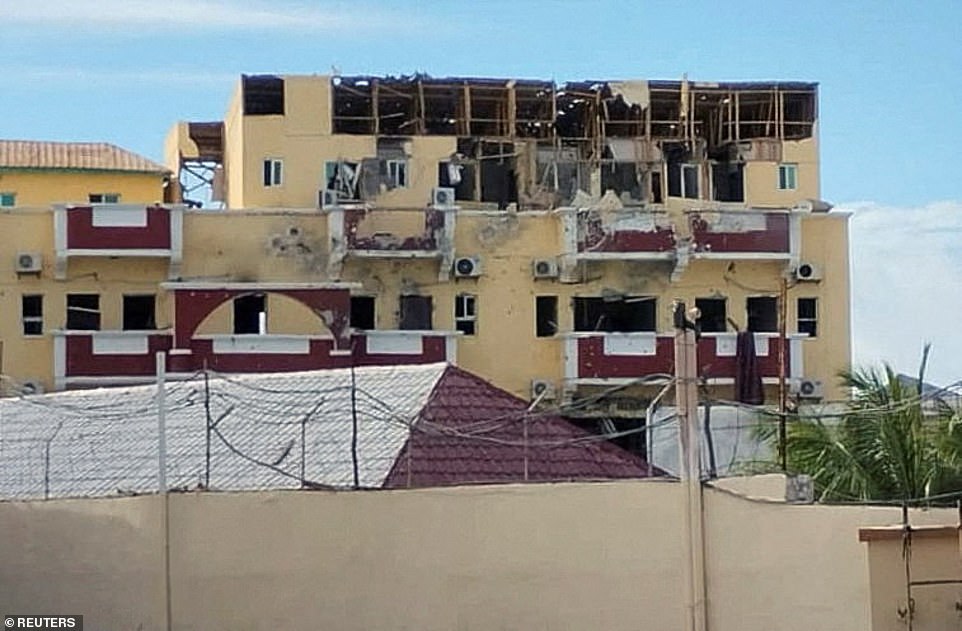 Fighters from the Al-Qaeda-linked Al-Shabaab stormed the Hayat Hotel in Mogadishu yesterday evening in a hail of gunfire and bomb blasts, trapping scores of people 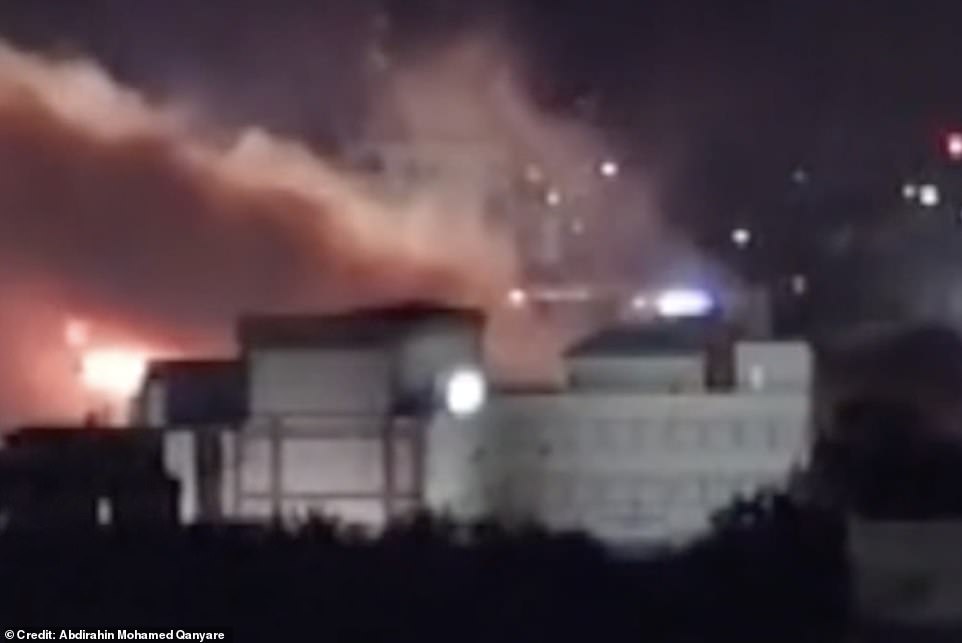 The East Africa group IGAD and Turkey, which has a military base in Somalia, both issued strong condemnations of the attack.

‘Among those critically wounded are a newlywed bride and her groom and a family of three children, a mother and their father,’ he said.

There was no immediate claim for that attack. 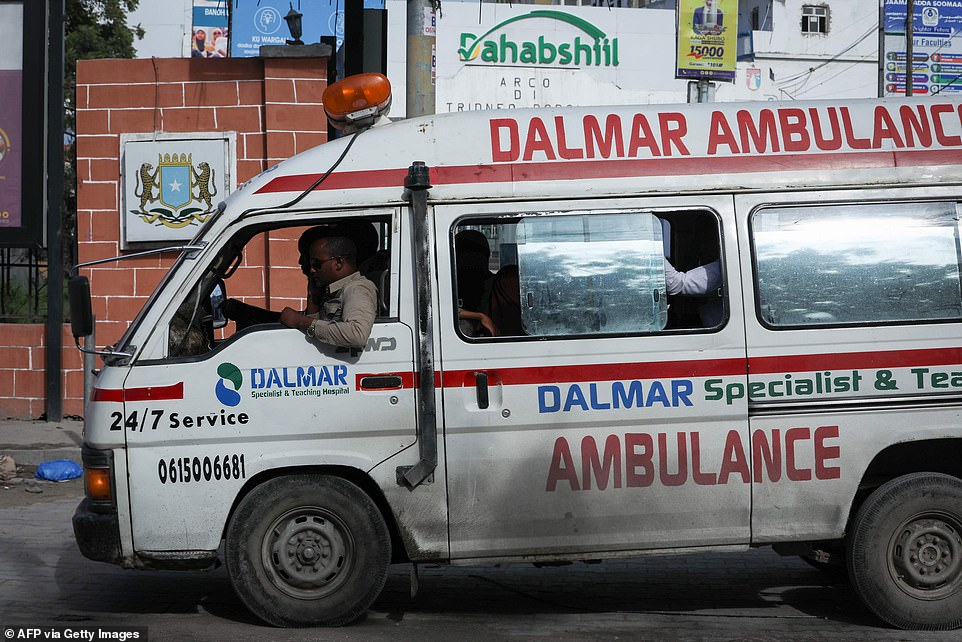 Police spokesman Abdifatah Adan Hassan had told reporters Friday the initial blast was caused by a suicide bomber who forced his way into the hotel with other gunmen.

Al-Shabaab claimed responsibility in a brief statement on a pro-Shabaab website, saying its fighters were carrying out ‘random shooting’ inside the hotel.

Its spokesman Abdiaziz Abu-Musab told the group’s Andalus radio Saturday that its forces were still in control of the building and that they had ‘inflicted heavy casualties’.

Al-Shabaab fighters have carried out several attacks in Somalia since Mohamud took office and have also launched strikes on the Ethiopia border, raising concerns about a possible new strategy.

Earlier this week, the United States announced its forces had killed 13 Al-Shabaab operatives in an air strike, the latest since US President Joe Biden ordered the re-establishment of a US troop presence in Somalia, reversing a decision by his predecessor Donald Trump. 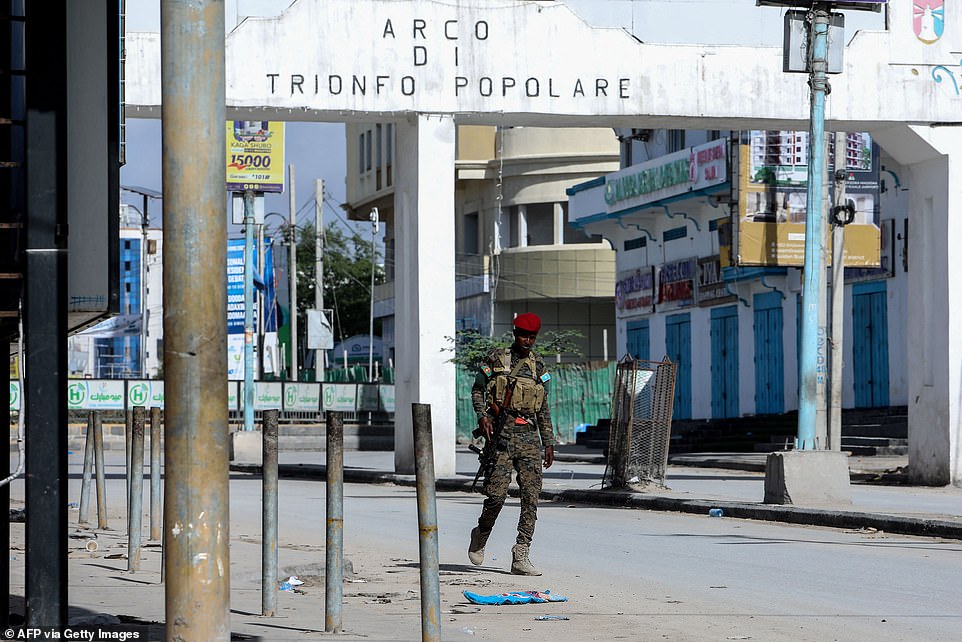 Mohamud said last month that ending the jihadist insurrection required more than a military approach, but that his government would negotiate with the group only when the time was right.

Al-Shabaab was driven out of the capital in 2011 by an African Union force, but it still controls swathes of countryside and continues to launch deadly strikes on political, civilian and military targets, with popular hotels and restaurants often hit.

Robow, 53, defected from Al-Shabaab in 2017, with the US government at one point offering a $5 million bounty for his capture.

Somalia has been mired in chaos since the fall of president Siad Barre’s military regime in 1991.

His ouster was followed by a civil war and the ascendancy of Al-Shabaab.

The deadliest attack occurred in October 2017 when a truck packed with explosives blew up in a bustling commercial district of Mogadishu, killing 512 people.

As well as the insurgency, Somalia is also in the grip of a devastating drought that has driven one million people from their homes and left the country in the shadow of famine, according to the United Nations.