Chocolates and other sweets could be slapped with a ‘sin tax’ under the Government’s latest obesity drive, it was revealed today.

Ministers are considering taxing them in the same way that sugary fizzy drinks are levied as a ‘nuclear deterrent’ if other measures unveiled by Boris Johnson today are unsuccessful.

It has led to Britons’ consumption of sugar in drinks dropping by more than a teaspoon per person each day, a major study revealed in January.

The idea is being explored, although Downing Street would prefer manufacturers to instead take a lead in developing healthier products, the Telegraph reported.

The Government is considering a ban on pre-watershed junk food adverts as well as a blanket online ban.

However, one Tory MP broke ranks today to question whether some aspects of the plan would be successful.

But he tweeted: ‘The sugary drinks tax did get companies to reformulate their products … but there is no evidence I’m aware of which shows that this (fall) in sugar has reduced obesity.

‘What’s important for weight loss is not individual items but someone’s overall diet. So I’m sceptical that ad bans and restrictions on offers will make much, if any, difference.’

It came as Mr Johnson today launched the Government’s new anti-obesity drive., admitting he was ‘too fat’ when he was hospitalised with coronavirus.

He said that since his recovery from the deadly illness he has focused on getting fitter by going on morning runs with his dog Dilyn.

He is urging the nation to follow his lead, insisting the Government’s ‘better health strategy’ will help people to ‘bring their weight down’ and better protect the NHS. 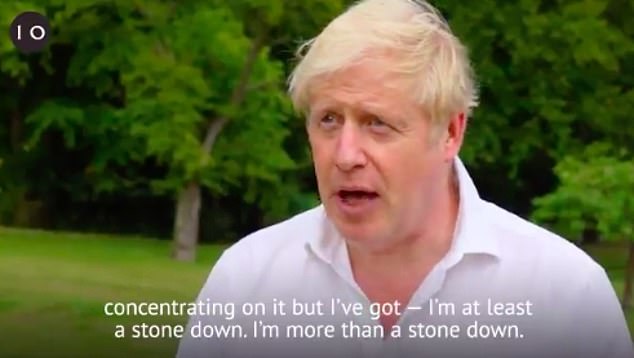 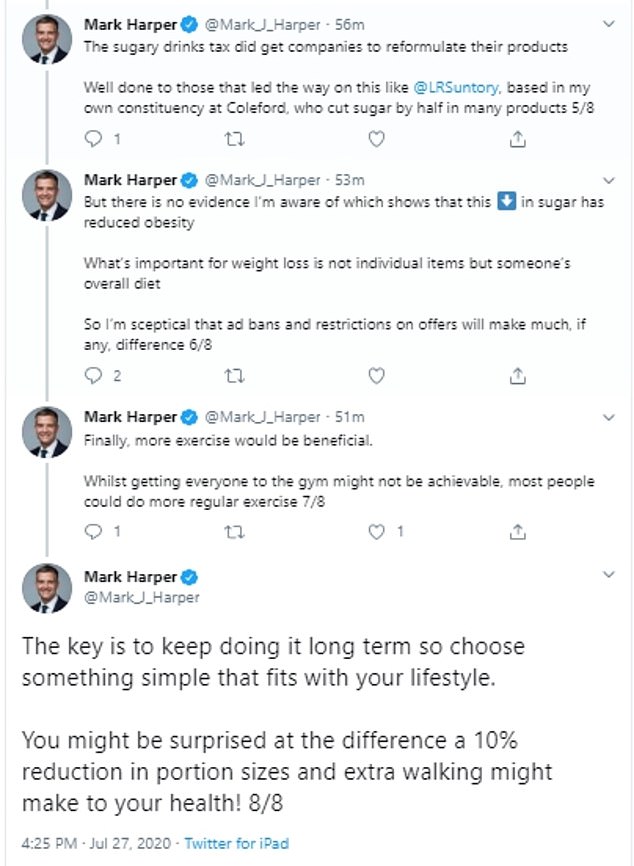 Former chief whip and leadership outsider Mark Harper tweeted: ‘The sugary drinks tax did get companies to reformulate their products … but there is no evidence I’m aware of which shows that this (fall) in sugar has reduced obesity’ 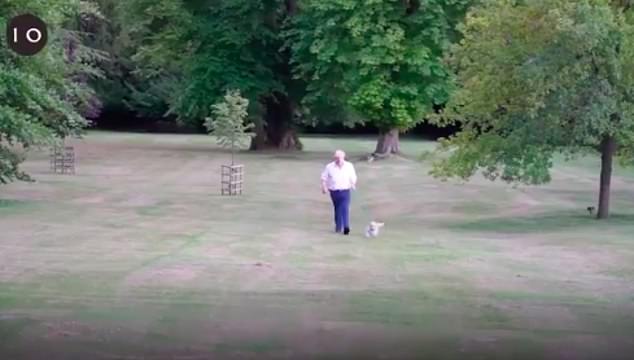 What is in Boris Johnson’s new anti-obesity strategy?

Stores will be barred from pushing ‘buy one, get one free’ promotions on unhealthy products as the Government looks to reduce the temptation to snack.

Supermarket managers will also be banned from placing confectionery in tempting locations, such as store entrances and beside checkouts, and will instead be encouraged to offer more discounts on fruit and vegetables.

The Prime Minister’s strategy will put an end to junk food adverts on television and online before the 9pm watershed in a bid to shield youngsters at a time when their food preferences are being set.

The Government will also hold a consultation into whether the planned internet advertising restrictions could be wider reaching, with a total ban on advertising food high in fat, sugar or salt an option under consideration.

Ministers will introduce new legislation forcing restaurants and takeaways with more than 250 employees to add calorie labels to their menus to assist diners in making more informed choices.

The Department of Health said a consultation would follow before the end of the year to help decide whether the same type of calorie labelling on alcohol should be required.

To help people lose the pounds, NHS weight management services will be expanding, with more smartphone apps rolled out with the purpose of improving lifestyle and overall health.

GPs will be encouraged to prescribe exercise and other social activities to help people keep fit, with cycling pilots in the poorest areas set to provide bikes to entice people into upping their activity levels.

A consultation – the third associated with the strategy – will gather evidence on how the current ‘traffic light’ labelling system on food packets is being used by consumers and industry, while comparing it to other international examples.

The labelling is used to highlight the fat content and other barometers of how healthy a product is to help shoppers understand what is in the food they buy.

However, he insisted ministers will not be ‘excessively bossy or nannying’ in telling people what to do.

The Prime Minister’s comments came as Health Secretary Matt Hancock said if overweight adults were to lose five pounds in weight it could save the NHS £100 million.

The UK is the second fattest country in Europe with two-thirds of adults above a healthy weight, according to Government data, and one in three children aged 10 to 11 are overweight or obese.

The Government’s new anti-obesity strategy, launched today, spells the end of confectionery displays at store checkouts and a ban on adverts for foods high in fat, sugar and salt on TV before 9pm.

Deals such as ‘buy one get one free’ on unhealthy foods will also be banned, while alcoholic drinks could soon have to list their calorie content.

Placing sugary and fatty items in prominent locations in stores will be stopped, including at checkouts and entrances, and online.

Instead, shops will be encouraged to promote healthier choices and offer more discounts on healthy food such as fruit and vegetables.

The Government will also hold a consultation on whether the ban on online adverts for foods high in salt, sugar and fat should apply at all times of the day.

Mr Johnson said in a video posted on Twitter to mark the launch of the strategy that ‘like many people I struggle with my weight’ and he had ‘always wanted to lose weight for ages and ages’.

‘But since I have recovered from coronavirus I have been steadily building up my fitness,’ he said.

‘I don’t want to make any excessive claims because I have only just started concentrating on it but I am more than a stone down.

‘When I went into ICU, when I was really ill, I was way overweight. I am only about five foot ten and I was too fat.

‘I start the day by going for a run with the dog – quite a gentle run but actually getting faster and faster now as I get fitter.

‘The great thing about going for a run at the beginning of the day is that nothing could be worse for the rest of the day.

‘If you really go in hard, if you really take some exercise at the beginning, the rest of the day will be a breeze.’

Mr Johnson said the ‘number one’ benefit of losing weight is that you ‘feel much better’ and feel ‘more full of energy’.

He continued: ‘The other thing obviously is if you can get your weight down a bit and protect your health you will also be protecting the NHS.

‘Gyms are great but you don’t need to have a gym. There are amazing things on your phone these days, amazing apps, fantastic trainers that you can watch on YouTube.

‘What we are doing now with our better health strategy is just trying to help people a little bit to bring their weight down – not in an excessively bossy or nannying way, I hope.

‘We want this one really to be sympathetic to people, to understand the difficulties that people face with their weight, the struggles that everybody faces, that many, many people face, to lose weight and just to be helpful.’

Mr Johnson was noticeably thinner in the weeks after his battle with coronavirus which had seen the PM admitted to hospital on April 5 and discharged on April 12.

He wrote in 2018 about feeling ‘ashamed’ during a visit to the doctor when he was asked about his diet and he recounted ‘late-night binges of chorizo and cheese’.

Mr Hancock echoed a similar sentiment to the PM, writing in The Telegraph: ‘If everyone who is overweight lost five pounds it could save the NHS over £100 million over the next five years.

‘And more importantly, given the link between obesity and coronavirus, losing weight could be lifesaving.’

But Tam Fry, chairman of the National Obesity Forum, said the Government’s plans were ‘not enough to see an end to the national emergency that obesity is’.

‘Her 49 recommendations, taken together, did have a fighting chance of doing what the doctor ordered but Johnson’s meagre list falls woefully short,’ he said.

The Government’s strategy was welcomed by TV chef Jamie Oliver who has campaigned to tackle child obesity for 20 years. He said the measures were a ‘huge step in the right direction’ but the ‘devil will be in the detail’. 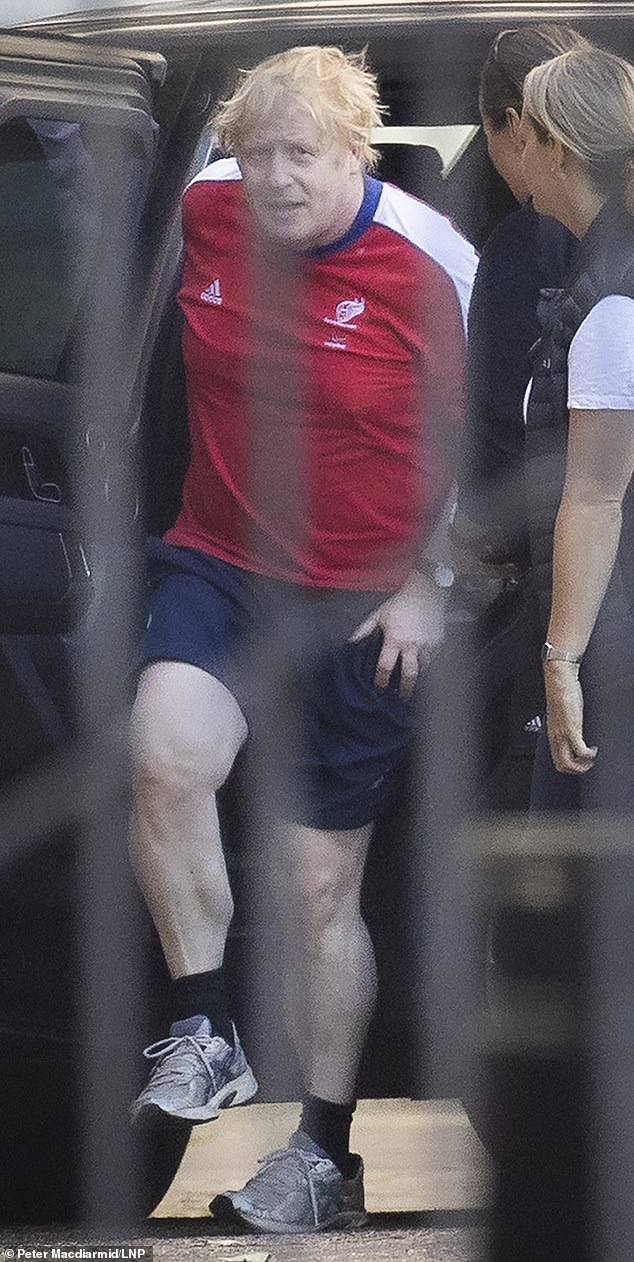 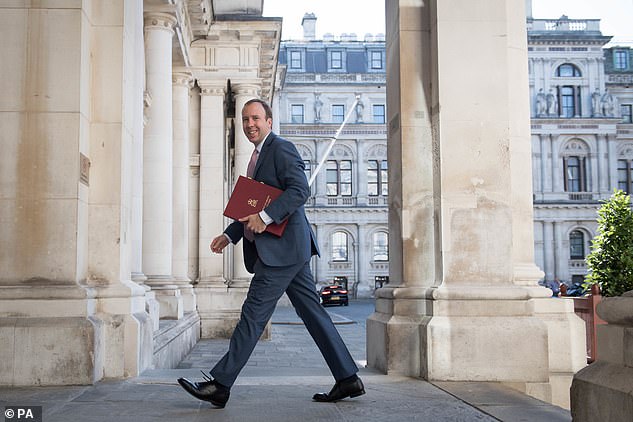 Chris Askew, chief executive at charity Diabetes UK, said the coronavirus pandemic had ‘brought into sharp focus the vast human cost we pay as a result of our unhealthy environment’.

Welcoming the Government’s strategy, he urged ‘swift action’, adding: ‘We need to stop putting profits before our nation’s health.’

When it comes to calorie labelling, new laws will require large restaurants, cafes and takeaways with more than 250 employees to add calorie labels to the food they sell.

A new campaign to help people lose weight, get active and eat better after Covid-19 is also being pushed out as a ‘wake-up call’ to the nation.

This will include more self-care apps and online tools and accelerating the NHS Diabetes Prevention Programme.

From next year, doctors will be offered financial incentives to ensure those who are obese are supported to lose weight, such as prescriptions for exercise and bike rides.

GP practice staff will also have the opportunity to become ‘healthy weight coaches’ though training delivered by Public Health England.

The highly interventionist approach marks a U-turn for Mr Johnson, who until recently has been a vocal opponent of ‘sin taxes’ and perceived ‘nannying’ by the state.