The man allegedly seen in viral video stealing a garbage bag full of items as he rode a bike through a San Francisco Walgreens location was nabbed over the weekend – while he was “clearing shelves” at a different drug store, officials have announced.

Jean Lugo-Romero was arrested around 8:30 a.m. Saturday after officers spotted him entering a store on Haight Street, San Francisco Police Department said in a recent press release. At the time, police officers who recognized him followed Lugo-Romero, 40, into the drug store “to find him clearing shelves of cosmetics and placing the merchandise into a duffel bag,” SFPD said.

After arresting him, officers determined the stolen goods were collectively worth approximately $978, police said.

“Officers had been looking for Lugo-Romero in connection with numerous investigations,” police said. “Lugo-Romero was suspected of committing thefts from merchants in the Northern and Mission Districts and was recently caught on camera during a brazen shoplifting incident during which he placed merchandise into a bag and rode a bicycle out of the store.”

Police said they were able to link him to six prior shoplifting incidents from May 29 through June 17. Five of the six previous thefts took place at the same Walgreens location at 300 Gough Street, police said. 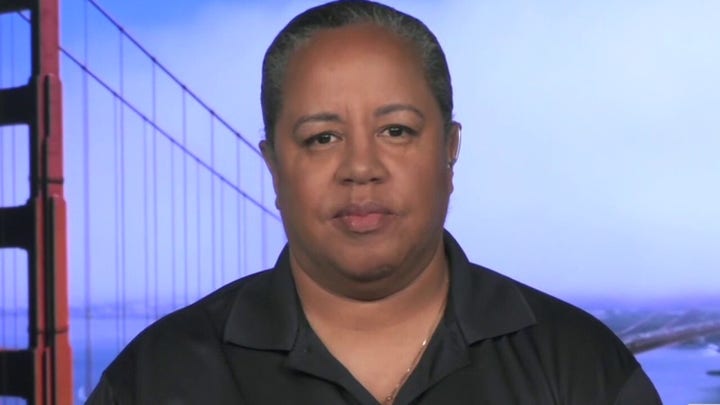 In all, Lugo-Romero was charged with several counts of attempted grand theft, entering a business with intent to commit theft, loss under $950, possession of narcotics paraphernalia, robbery, burglary and petty theft. He also had a warrant for failure to appear on a prior theft case, according to authorities.

He was booked in San Francisco County Jail, police said.

Viral video from last week showed the man riding a bike through a San Francisco Walgreens store hauling apparently stolen goods as he zipped his way past shoppers, including a security guard who was filming the incident on his cell phone, before he left out the door. The footage was captured by local KGO-TV reporter Lyanne Melendez and garnered thousands of likes and comments.

A spokesperson for Walgreens told Fox News at the time that the video depicts a crime that was reported to police.

“Unfortunately, this is another example of blatant retail theft, which is an ongoing problem for several retailers in San Francisco,” the spokesperson said.

And San Francisco County District Attorney Chesa Boudin’s Proposition 47 made any nonviolent theft of items collectively worth $950 a misdemeanor, decreasing the penalties for such crimes.

When asked if Boudin’s office would be filing charges against the suspect, a spokesperson told Fox News they were reviewing the case and would make a decision by the end of the day on Tuesday.

“No business should have to tolerate this kind of brazen crime.  Local businesses are the backbone of our community,” said the spokesperson, Rachel Marshall, in an email. “These crimes are profitable because of the vast criminal network behind them, which our office is dismantling.”

Marshall said the office had created “an ongoing retail theft taskforce” and was “pushing to launch a specialized property crime victim advocacy program.”

She added: “We are working with multiple law enforcement agencies to disrupt and deter organized retail theft, which so far has led to the recovery of over $8 million in stolen merchandise.”