‘So his 16-bathroom home isn’t privilege?’ Royal expert blasts ‘victim’ Prince Harry after he tells Dax Shepard’s podcast ‘you may start in one place but can change over time’

Prince Harry was today blasted by a royal expert for being ‘the victim again’ after saying that he was born into extraordinary privilege – before hinting that he believes this has changed since he quit royal life with Meghan Markle last year.

The Duke of Sussex revealed that when he and Meghan first started dating they ‘pretended they didn’t know each other’ in a supermarket to hide their relationship.

In a wide-ranging interview he also admitted to hating royal life so much he wanted to quit in his 20s and that Meghan has concluded: ‘You don’t need to be a princess.’

Harry also said of privilege: ‘I truly believe you can move along the spectrum as well, wherever you were born you may start in one place but that will change over time’.

He told Dax Shepard’s ‘Armchair Expert’ show that the couple tried to stay ‘incognito’ during his wife’s first trip to stay with him in London in 2016, where he lived at Kensington Palace, texting items for their shopping list from across food aisles.

Harry also compared his life as a mixture of The Truman Show – when Jim Carrey’s character discovers his life is a TV show – and being an animal at the zoo.

‘Reveals he and Meg pretended not to know each other in a supermarket and that although he was born into privilege now believes “you may start in one place but you can change in time”. So his 16-bathroom home isn’t privilege.’

Ms Levin was referring to the couple’s £11million mansion in Montecito, California, where they have been living since last summer as after stepping down as senior royals at the start of last year.

During the podcast, the Duke also said: ‘If Oprah is at one end, I am on the other based on my privilege and upbringing. And Oprah’s at the opposite end, then every single one of us is somewhere along there.

‘By the way I truly believe you can move along the spectrum as well – wherever you were born you may start in one place but that will change overtime.’ 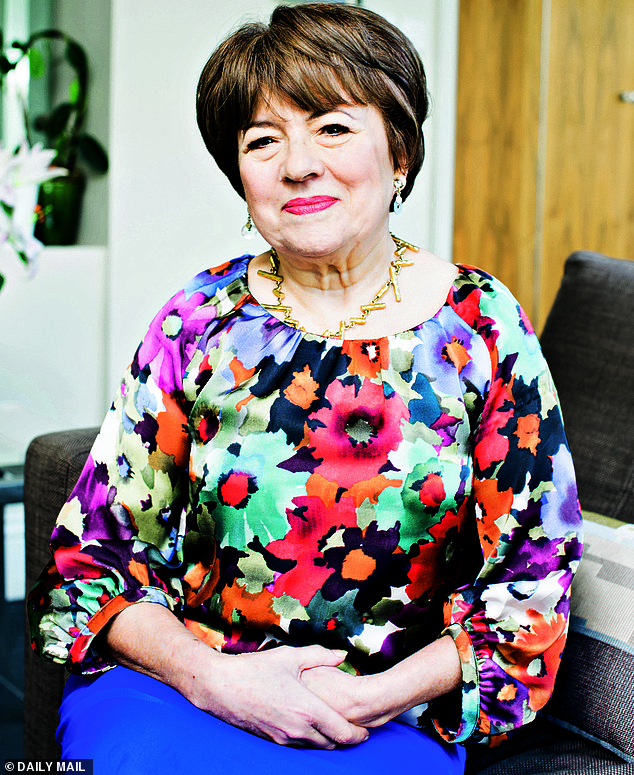 Royal author Angela Levin, who wrote the 2018 book Harry: Conversations with the Prince

During the 90-minute interview Mr Shepard, who is married to Frozen star Kristen Bell and spoke about his own addiction to smoking crack, asked him if he had done ‘mundane things’, such as going to the supermarket.

He said: ‘The first time Meghan and I met up for her to come and stay with me, we met up in a supermarket in London, pretending we didn’t know each other, texting each other from the other side of the aisles.

‘There’s people looking at me, giving me all these weird looks, and coming up to me and saying ‘hi’. I texted her saying ‘is this the right one’, and she said ‘no you want parchment paper’, and I’m like ‘where’s the parchment paper?!’.

He added: ‘I had baseball cap on, looking down at the floor, trying to stay incognito. It’s amazing how much chewing gum you see, it’s a mess’.

Harry did not say which supermarket he visited but in November 2016, Meghan was spotted leaving a Whole Foods store in West London, just a few hundred yards from Kensington Palace.

Harry was also a regular, although the high-end food shop is unlikely to have much chewing gum stuck to its floors.

When asked if he felt ‘in a cage’ while in royal duties, he said: ‘It’s the job right? Grin and bear it. Get on with it. I was in my early twenties and I was thinking I don’t want this job, I don’t want to be here.

‘I don’t want to be doing this. Look what it did to my mum, how am I ever going to settle down and have a wife and family when I know it’s going to happen again’.

He added: ‘I’ve seen behind the curtain, I’ve seen the business model and seen how this whole thing works and I don’t want to be part of this’, before revealing he had therapy after meeting Meghan, which ‘burst’ a bubble and he decided to ‘stop complaining’.