Cruise giant Royal Caribbean has lost its bid to block an Australian family from taking legal action against it in the United States over the disastrous 2019 trip to New Zealand’s White Island, where a volcanic eruption killed 22 people including 14 Australians.

The Federal Court of Australia has cleared the way for Marie Browitt and her daughter Stephanie to sue the international cruise operator where its headquarters are located in Miami. 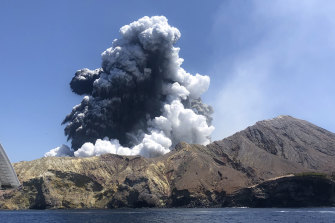 The eruption at White Island as seen from a tourist boat.Credit:Lillani Hopkins

Stephanie Browitt was hiking on White Island, or Whakaari, on December 9, 2019, with a group of tourists from the Ovation of the Seas ship including her father Paul and 21-year-old sister Krystal when the volcano erupted.

All three sustained horrific injuries from the volcano’s exploding cloud of molten rock and ash. Krystal died that day, while Paul died in hospital in Melbourne a month later.

Another 12 Australians were among the 22 killed in the disaster, while 25 people were injured.

Marie, who did not join her family on the excursion is now Stephanie’s full-time carer after her surviving daughter suffered third-degree burns to 70 per cent of her body, lost her fingers, and was hospitalised for six months including an initial two-week coma.

The two surviving Browitt women commenced legal action against the Liberian-registered Royal Caribbean Cruises Ltd in December 2020, alleging the company contracted with White Island Tours for the disastrous excursion, causing loss and damages suffered as a result of certain “acts and omissions”.

Within two weeks of the lawsuit being filed in the US, Royal Caribbean sought to restrain the Browitts from pursuing legal action in Florida, arguing that under the terms of their contract, any disputes would be subject to the exclusive jurisdiction of NSW courts.

That claim was dismissed in the Federal Court on Friday.

Justice Angus Stewart SC noted in his judgment that there are no parallel proceedings underway in Australia, and as Royal Caribbean is headquartered in Florida where the omissions and acts are alleged to have occurred, “the pursuit of the Florida proceeding is entirely legitimate and in no sense unconscionable”.

He acknowledged that the Browitts “enjoy certain legitimate juridical advantages” in taking legal action in the US, including higher damages.

In an Instagram post earlier this month, Stephanie Browitt vowed to continue to fight, alongside her mother, for her dead father and sister.

“When times get tough and I struggle, I remind myself that we’re doing this for you both. You both deserved better and you both should be here with mum and I,” she wrote.

“I love you dad and Krystal so very much and mum and I will continue to fight every day for you.”