If Robert Doyle is genuinely ashamed and sorry for what he did, he should pick up the phone, call the number given to him by detectives from the Victoria Police sexual crimes squad and agree to answer their questions.

For three years, Melbourne’s longest-serving lord mayor used his fragile mental health to shield himself from the women he accosted. 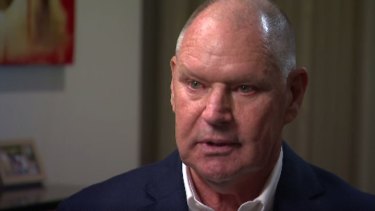 former Melbourne mayor Robert Doyle  appearing on 3AW, tearfully apologising for the hurt his actions caused – but admitting he had not contacted his victims to offer them a apology.

When an inquiry established by the City of Melbourne asked Doyle to answer allegations made by Kharla Williams that he assaulted her at a Melbourne Health dinner, Doyle was too sick to respond.

When a parallel inquiry established by Melbourne Health asked Doyle to respond to the same allegations, the former Liberal Party leader cited the same excuse.

In his first media interview since The Age exposed the Town Hall sex scandal in late 2017, Doyle told Radio 3AW’s Neil Mitchell that his actions caused people anguish and pain. He described his conduct as reprehensible.

A tearful Doyle said he was speaking from the heart, that he saw how ugly he had been and that, like a Robbie Williams song, he was trying to be a better man.

When this could have made a difference to Kharla Williams, former City of Melbourne councillors Tessa Sullivan and Cathy Oke and other women he may have manhandled or harassed during his lengthy time in public life, Doyle offered nothing.

Nothing beyond the blanket denials repeatedly issued by his lawyer.

Even in his belated moment of mea culpa with Mitchell, Doyle made no admission that the allegations against him were true; only that he was sorry for the hurt he had caused.

There is no question that Doyle faced a real and potentially life-threatening mental health crisis. Throughout 2018 he spent lengthy periods in hospital. In his darkest moments, he thought about killing himself.

Beneath the weight of scandal, his marriage collapsed and personal finances came under significant strain.

Yet, the scale of Doyle’s self-inflicted demise and the sleaziness of his behaviour was matched only by the cynicism of his response.

This cynicism peaked when, at the same time he was too sick to instruct his lawyers to respond to the City of Melbourne inquiry led by Ian Freckelton QC, Doyle initiated Supreme Court proceedings challenging the validity of that same inquiry.

Doyle’s legal manoeuvres achieved their desired result, causing the City of Melbourne to delay the completion of the Freckelton inquiry and release of his findings into the Williams allegations.

Both the City of Melbourne and Melbourne Health inquiries upheld allegations of sexual misconduct against Doyle but the time it took to reach and publish these findings had an enormous impact on Williams.

She fronted a City of Melbourne council meeting in the hope of forcing a resolution to what had become a protracted and distressing saga. When that failed, she lodged a complaint with Victoria Police.

One of these was a woman Doyle allegedly accosted at a corporate function when he was opposition leader. She told The Age: “The question is really whether Robert Doyle is sincere in his own heart. I think he is feeling more sorry for himself than the people he has truly impacted.”

The other woman was a 15-year-old student at Geelong College when Doyle was an English teacher.

None of the allegations were formally put to Doyle. When police last year sought to interview Doyle he declined, again citing ill health. Victoria Police subsequently decided not to press charges following advice from the Office of Public Prosecutions.

So why has Doyle decided to talk publicly about it now?

Perhaps he sees it as a step towards rehabilitation. Perhaps, with all inquiries into his lecherous behaviour now finalised, he can speak out without fear of further consequences.

Whatever his reasons, one thing seems clear. Throughout this entire episode, Doyle’s principle concern has been Robert Doyle, not the women he groped.