The RNLI is having to delay other rescue work because of the number of migrants it is now picking up in the Channel, it was claimed today.

It came as some supporters stopped giving cash because lifeboats are heading into French waters to pick up migrants and the charity has been spending millions of pounds abroad including buying burkinis for children in Africa and funding nursery places in Bangladesh.

Some withdrawing their support even compared it to the left-leaning National Trust, where irate members campaigned to oust its ‘worthless wokes’ leadership team after a series of controversial policies.

Britain’s lifeboat service has been accused of becoming a ‘taxi service for people traffickers’ after it was revealed teams were going into French waters to pick up refugees in dinghies.

One lifeboat expert working regularly in the Channel told MailOnline today: ‘I’ve had a few RNLI crew tell me about them refusing to help boaters as they are too busy carrying people ashore’. The RNLI has been asked to comment.

It came at a time when the number of lives lost in British water during the recent heatwave hit 13, including several children. 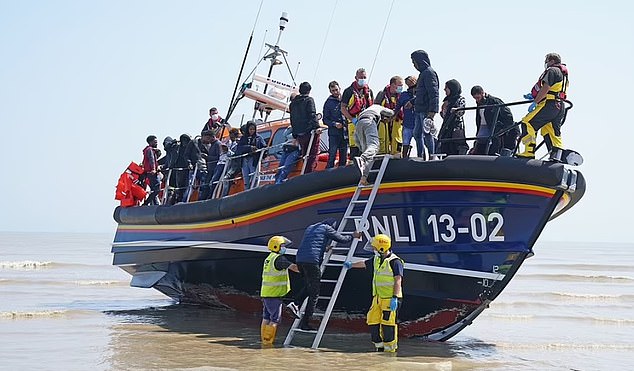 A group of people thought to be migrants crossing from France come ashore from the local lifeboat at Dungeness in Kent (pictured last month), after being picked up from a small boat in the Channel 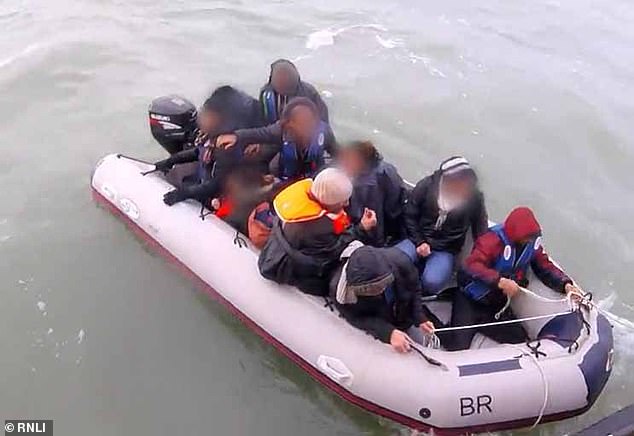 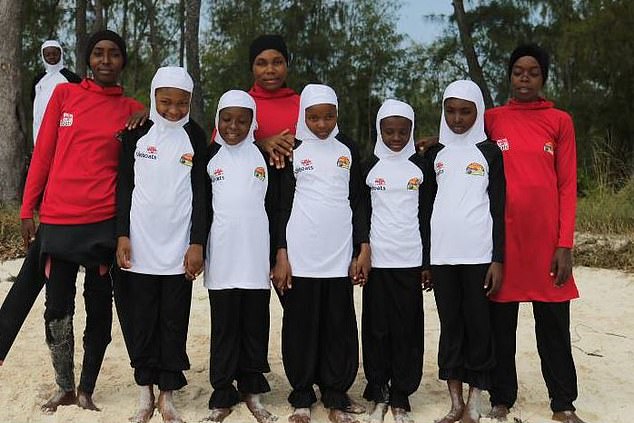 The Mail on Sunday reported in 2019 how the RNLI is spending millions on projects abroad, including buying burkinis for Muslim women in Tanzania 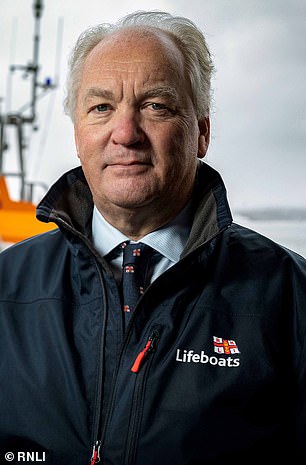 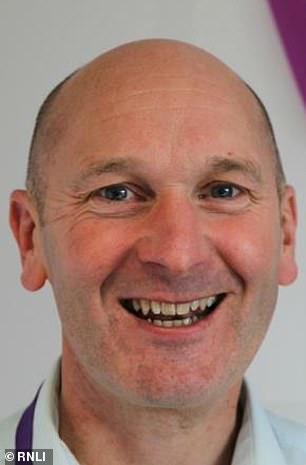 The RNLI, founded in 1824, has been accused of becoming obsessed with political correctness in recent years, leading to resignations among volunteers. Parallels have also been drawn with the National Trust, where members successfully plotted to oust the charity’s chairman over his ‘woke’ agenda. 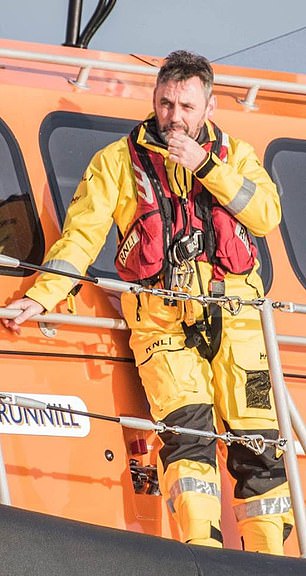 War veteran Antony Kelly, who was a coxswain on the RNLI’s Skegness lifeboat, quit and claimed that the charity is in a ‘downward spiral’

Britain’s lifeboat service sends around two per cent of all donations outside of the UK on a wide number of projects in Africa and Asia including buying burkinis for Muslim women in Africa and setting up creches in south Asia.

In 2019 the RNLI brought in Dr Philip Goodwin, a green charity boss, to drive the British charity’s work abroad saying their initiatives and money will target the world’s poorest countries because they account for 90% of drowning deaths.

The RNLI declined to comment on accusations they were acting as a ‘taxi service’, and denied that their recent Twitter campaign defending their migrants policy was to raise cash.

Jayne George, RNLI Fundraising Marketing and Media Director: ‘We are overwhelmed with the huge level of support we have received from our amazing supporters in the last couple of days.

‘Our supporters’ kindness means so much to us, without them we could not save lives at sea, every one is a lifesaver.

‘We know that this is a polarising issue and people have strong opinions on the subject. Sadly, a small number of supporters have contacted us to withdraw their support.’

Previously it emerged donations were being spent on swimsuits for devout Muslim women in Tanzania and on funding creches in Bangladesh which the RNLI claims helps to prevent drownings overseas. 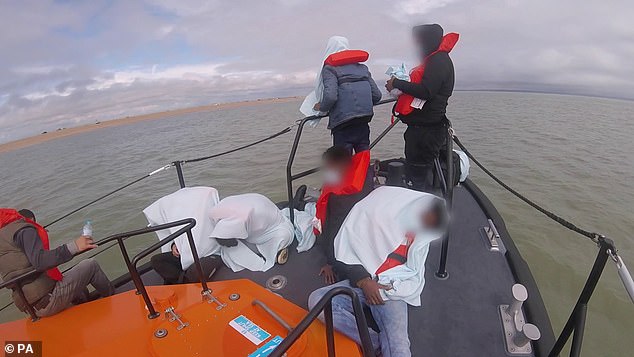 One expert told MailOnline that he had been told that some RNLI volunteers have been unable to help boaters ‘as they are too busy carrying people ashore’.

But the charity’s £189,000-a-year chief executive Mark Dowie warned just before the pandemic that it was ‘facing some major challenges’ after making a loss of £6.3 million, and announcing 135 job cuts.

The entire crew at St Helier, Jersey, resigned after the coxswain was sacked following a dispute over a launch.

The coxswain at Arbroath was sacked after failing to prevent a prank in which a crewman bared his buttocks. And two crewmen from Whitby, North Yorkshire, were dismissed last summer after tea mugs were found decorated with ‘inappropriate material of a sexual nature’.

The charity also came under fire after advertising for a £42,000-a-year ‘safeguarding officer’ to promote ‘health, safety and wellbeing’.

The RNLI has talked about trying to ‘influence policy-makers and partners’ and lobbying the United Nations to reduce deaths at sea.

It has a ‘national team of health, safety and environment advisers’, and a ‘diversity leadership group’ tasked with promoting the ‘International Day Against Homophobia’. 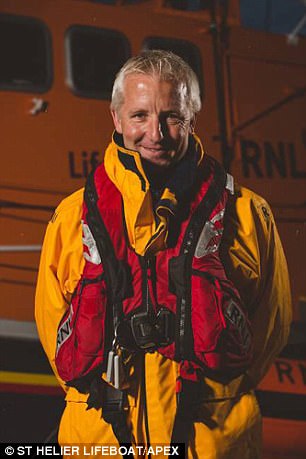 The entire crew of an RNLI station in Jersey quit after coxswain Andy Hibbs, 50, was allegedly ‘bullied into resignation’

The RNLI used to limit its operations to the UK and Ireland but its Charity Commission registration now lists areas covered as the British Isles, Tanzania and Bangladesh.

The charity said two per cent of its income went on overseas projects and this did not have an impact on its domestic rescue services. Its Panje Project in Tanzania sends trainers to teach swimming in areas where drowning rates are high.

Its work includes giving out burkinis – costumes with a head covering, long-sleeved tunic and trousers to protect the modesty of Muslim women.

Providing free creche places in Bangladesh stops children playing by rivers and reduces a child’s risk of drowning by 82 per cent, the charity added.

And the Isle of Man Government is giving £57,855 to support the RNLI’s work in Bangladesh where it has a project teaching children to swim.

In 2016, the charity announced it was providing training to Greek, German, Dutch and Swedish organisations to help save migrants crossing from Turkey to Greece.

A spokesman claimed the RNLI’s founder, Sir William Hillary, had said its work on drowning prevention should be extended to ‘the most remote quarters of the globe’.

Britain’s lifeboat service has been inundated with donations after it emerged that crews were facing abuse for saving migrants.

The RNLI received more than £200,000 in 24 hours online, up from about £7,000 on a typical day, as the public showed its appreciation for the Channel rescue operations. 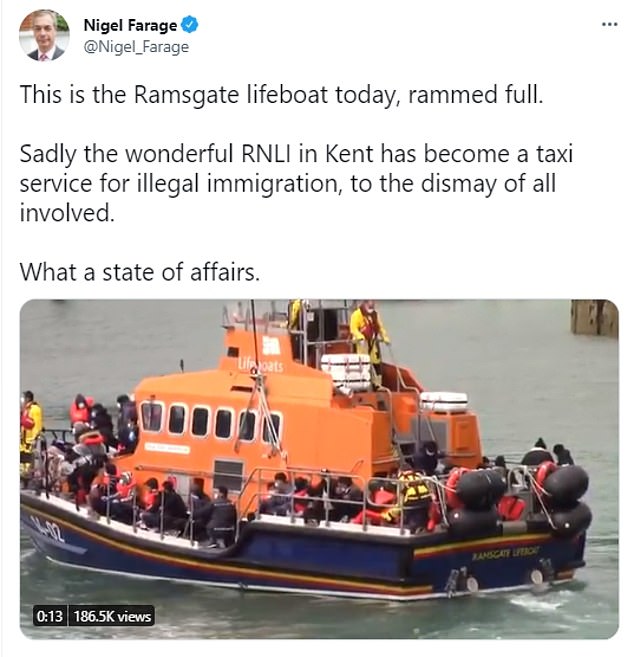 Nigel Farage has said: ‘Sadly the wonderful RNLI in Kent has become a taxi service for illegal immigration, to the dismay of all involved.’

And there was a surge in people looking at volunteering opportunities on the charity’s website.

The outpouring in support was backed by senior politicians with Downing Street praising the RNLI’s ‘vital work to protect people’s lives at sea’.

The story of the RNLI saving lives at sea: 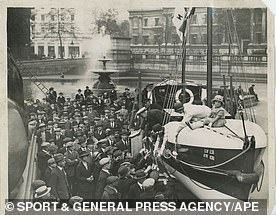 The Lifeboat Day Centenary in Trafalgar Square, London, in 1924 (pictured)

The charity’s philosophy is to provide a lifesaving service using volunteers wherever possible.

1880 – The Zetland, built in 1802, was retired. The oldest surviving lifeboat in the world saved more than 500 lives and has been preserved at Redcar, North Yorkshire

Foreign Secretary Dominic Raab said: ‘They’ve got this great heart and soul to them and they do an amazing job and I think they operate obviously within the legal rules and that’s part of this country. We’re a big-hearted country.’ However he added that the UK wanted to ‘come down as hard as is humanly possible’ on the criminal gangs launching small boats from France to the UK, with a record 9,000 making the perilous journey already this year.

Controversy over the RNLI’s role in rescuing migrants began when former UKIP leader Nigel Farage wrote online earlier this month: ‘Sadly the wonderful RNLI in Kent has become a taxi service for illegal immigration, to the dismay of all involved.’

Then at the weekend the RNLI’s Tower lifeboat crew tweeted: ‘We are shocked and saddened to report some of our volunteer crew were verbally assaulted due to their role when reporting for duty tonight.’

One volunteer told the BBC how his team had once been confronted by an ‘angry mob’ shouting ‘go back to France’ as they brought rescued migrants ashore, while another said they had seen a ‘drunken yob’ throw a beer can at women and children.

On Wednesday, the charity’s chief executive Mark Dowie spoke out in defence of the operations, sparking the surge in donations.

He said: ‘All decent people will see this as humanitarian work of the highest order.

‘Our crews should not have to put up with some of the abuse they received.’ He went on: ‘Our volunteers get out of bed in the middle of the night, leave their employment, leave their families, and go out and do this because they believe in doing the right thing.’ RNLI fundraising director Jayne George said yesterday [thurs] that the charity, founded in 1824, had been ‘overwhelmed’ by the huge level of support it had received.

However she admitted: ‘We know that this is a polarising issue and people have strong opinions on the subject.

‘Sadly, a small number of supporters have contacted us to withdraw their support.’ Mr Farage insisted he did not want to pick a fight with the RNLI but had spoken to lifeboat crew and local residents who were unhappy at the situation.

He said on GB News: ‘All I can tell you is a very, very large number of people in our coastal communities are deeply disquieted by what’s going on.’