High school principals successfully pushed the Andrews government to delay the return to the classroom in term four by one week, to minimise the risk of a COVID-19 case robbing any year 12 students of their last chance to sit the General Achievement Test. 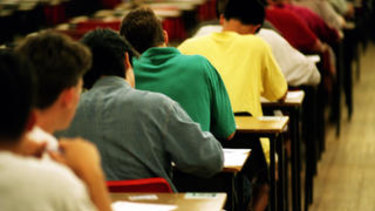 Year 12 students will return to the classroom for one day on October 7 to sit the GAT.

The test, called the GAT, will be taken on October 7 – almost four months later than originally scheduled – with year 12 students due to break from remote learning for one day to take the test at school.

Term four begins on October 5, but the Victorian Association of State Secondary Principals lobbied the government to delay any staggered return to face-to-face learning until week two, for fear that an unplanned shutdown would force the test’s cancellation.

Association president Sue Bell said the significant delay in sitting the GAT this year due to the pandemic had left no room in the school calendar to reschedule the test without clashing with VCE exams.

“If the GAT doesn’t happen, there is almost no point for students to sit exams; we’ve got to have GAT as a moderating influence,” Ms Bell said.

A Department of Education spokesman confirmed remote learning would continue in the first week of term four statewide to avoid the risk of an infection sabotaging the GAT at any school.

“In the first week of term four, remote learning will continue for all students,” the spokesman said.

“This reduces any risk of a school closure during the first week, which would place at risk the capacity of VCE students to complete the GAT.”

The GAT is a three-hour test of each student’s general knowledge and skills in written communication, maths, science, technology, the arts and humanities, comprised of 70 multiple choice questions and two written pieces.

It is normally used to check that students’ VCE external and school-based assessments have been fairly and accurately assessed.

For years it has been a running joke among many VCE students, as it generally has no direct bearing on year 12 results.

Some students have put more effort into slipping that year’s “GATchphrase” into the test than studying for it (references to children’s classic Cat in the Hat and Eagles ruckman Nic Naitanui are two past examples).

But year 12 students are being urged to study for the test this year, because the results could carry added weight in assessing a student’s case for special consideration due to COVID-19.

For the first time, some non-government schools have arranged practice GATs for year 12 students, as well as tips and advice on how to blitz the test.

Brighton Grammar told parents it was clear that the GAT would take on extra importance this year as students’ study scores are adjusted to account for educational disadvantage due to COVID-19.

“The GAT will be a key measure for VCAA to use to make this adjustment, so ensuring our boys optimise their performance is even more important this year,” Brighton Grammar’s head of VCE programs, Amy Atchison, wrote.

The Victorian Association of State Secondary Principals has also sent state schools material to assist students with the GAT.

“The GAT is going to be more important than in previous times, and sometimes having a practice go is a calming influence,” Ms Bell said.

“In the past, sometimes students haven't taken it very seriously. This is about saying it’s a good idea to take it seriously this year.”