Now Mississippi residents are urged to shower with their MOUTHS CLOSED: 150,000 in Jackson are warned to only use brown water to bathe in as officials rush to fix the busted treatment plant

The water situation in Jackson, Mississippi has become so desperate that residents of the city have been told to shower with their mouths shut.

Since July, Jackson’s residents have been boiling their water after cloudy water was spotted close to the main treatment plant in the city, O.B. Curtis. Shortly after that, the plant’s pumps failed forcing O.B. Curtis to use back-up pumps.

After the nearby Pearl River flooded, the plant had to be shut down.

On Wednesday, Craig told the public to not ‘open your mouth while you’re in the shower.’ Additionally, Craig also said that animals should kept away from water that has not been boiled for at least a minute.

The city, with its population of 150,000, is the largest city in Mississippi.

In addition to technical problems, the city’s water treatment facilities are also undergoing a staff shortage. 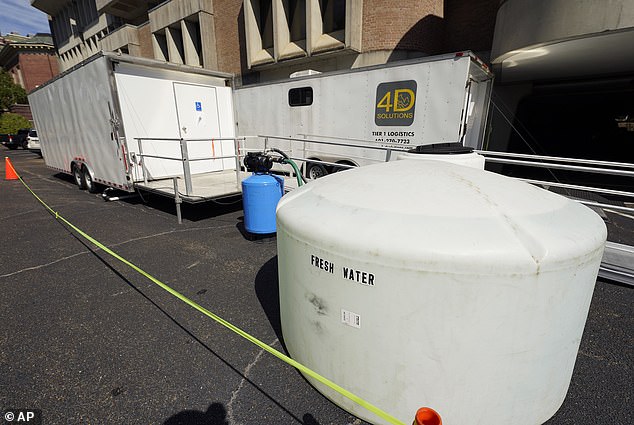 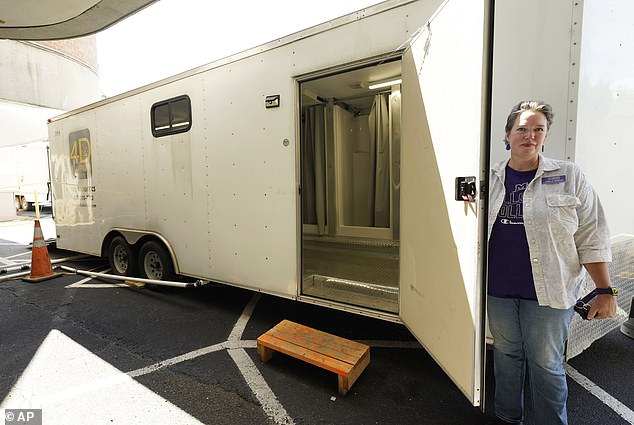 Additionally, Craig also said that animals should kept away from water that has not been boiled for at least a minute 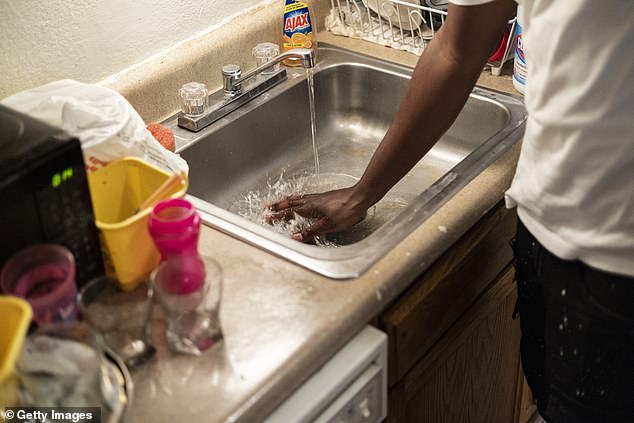 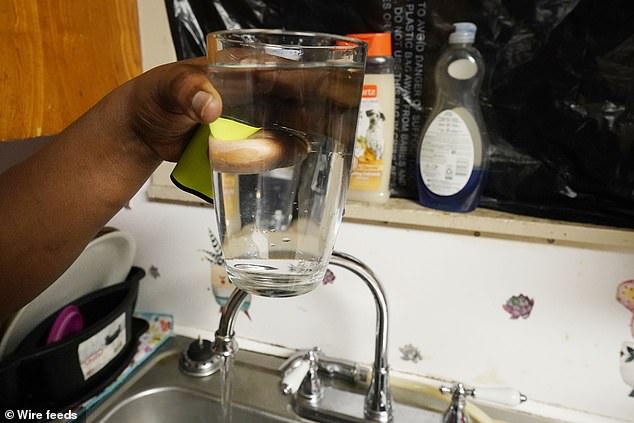 Sharon Epps, who lives in a rental home in the Queens neighborhood of Jackson, Miss., holds a glass of tap water taken from her kitchen faucet, Aug. 17, 2022 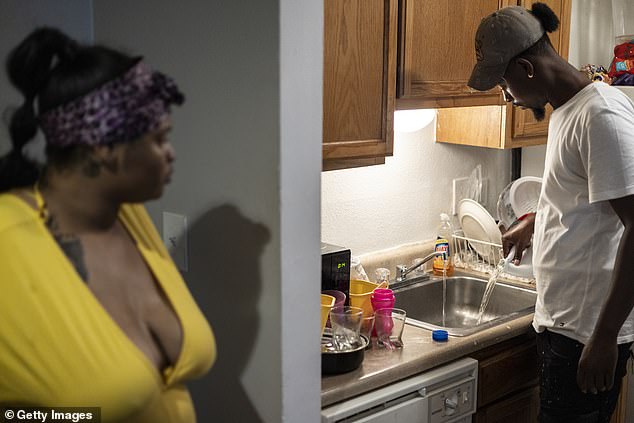 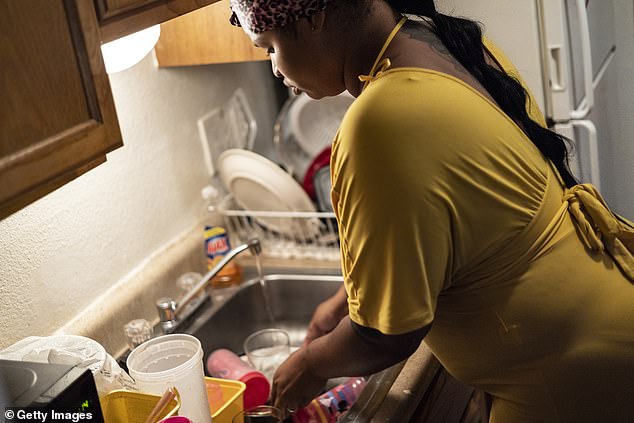 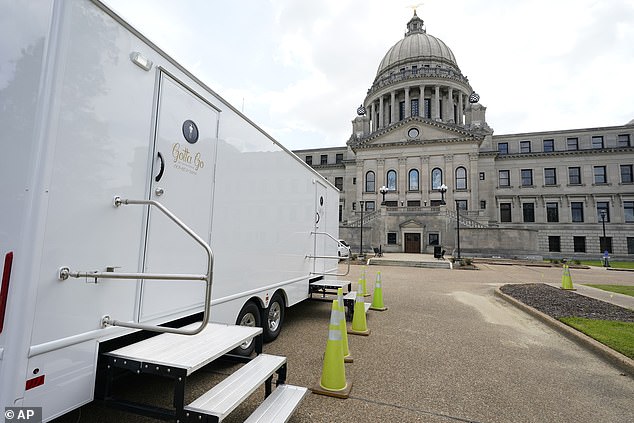 For at least the third time in a dozen years, portable toilets are parked outside the ornate Mississippi Capitol because Jackson’s water system is in such crisis

For at least the third time in a dozen years, portable toilets are parked outside the ornate Mississippi Capitol because Jackson’s water system is in such crisis.

The big ‘Gotta Go’ trailer is just one example of the city’s desperation. Many homes, businesses and government offices have had little or no running water this week, forcing people to wait in long lines for bottled water to drink or to flush toilets.

The scenes testify to the near collapse of a water system that residents could not trust even in the best of times. The failure to provide such an essential service reflects decades of government dysfunction, population change and decaying infrastructure. It has also fueled a political battle in which largely white GOP state lawmakers have shown little interest in helping a mostly Black city run by Democrats.

‘We´re on a budget, and we have to go buy water all the time. All the time,’ said Mary Huard, whose child has been forced to shift to online schooling because in-person classes were called off due to weak water pressure.

Even before the pressure dropped, Jackson’s system was fragile, and officials had warned for years that widespread loss of service was possible. A cold snap in 2021 froze pipes and left tens of thousands of people without running water. Similar problems happened again early this year, on a smaller scale.

The crisis deepened after heavy rain last week flooded the Pearl River and exacerbated trouble at the main water-treatment plant during the weekend.

The National Weather Service said the Pearl River had crested at about 35.4 feet. That is short of the major flood stage level of 36 feet.

Public schools in the city announced Monday night that they would be indefinitely transitioning to virtual learning as the water shortages persists, according to Mississippi today.

The lines for water formed at churches, fire stations, community centers and outside big-box stores.

Outside a high school, volunteers used a pump connected to a tanker to distribute water to people who showed up with whatever empty containers they could find. One woman brought a truck bed full of empty paint buckets. A school maintenance worker hauled away a garbage container with water sloshing over the sides. 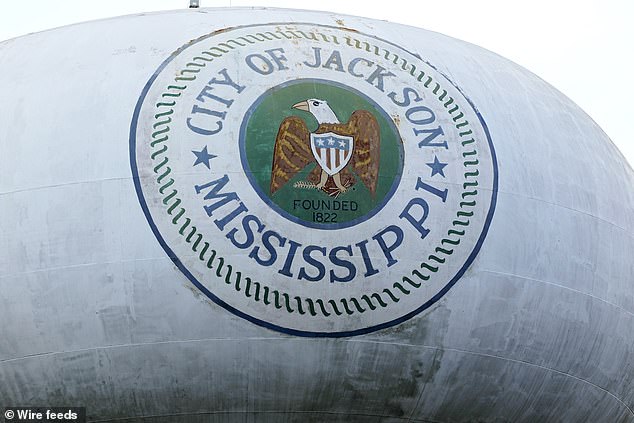 The city, with its population of 150,000, is the largest city in Mississippi 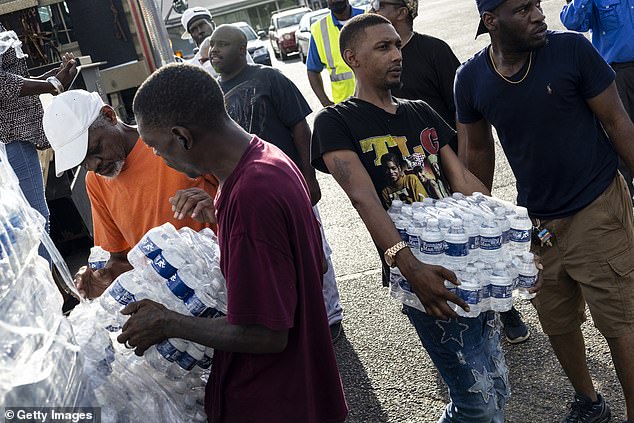 The lines for water formed at churches, fire stations, community centers and outside big-box stores 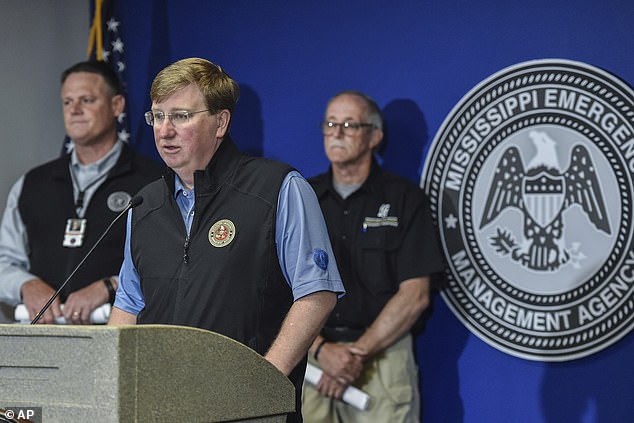 When Gov. Tate Reeves and President Joe Biden declared the situation an emergency, residents had already been advised for a month to boil their water before doing everything from brushing teeth to boiling pasta.

President Biden’s administration on Thursday said it will consider all options in responding to the water crisis in the majority-Black city.

‘We are going to continue to work with the state and local government officials to explore, I can tell you, all options to ensure that the people of Jackson have the access — to your point — to clean, safe drinking water,’ White House spokesperson Karine Jean-Pierre told reporters.

That ability has been limited by a shrinking tax base that resulted from white flight, which began about a decade after public schools were integrated in 1970.

Speaking to the media on Thursday, Lumumba said: ‘We made some positive gains within the system. We are encouraged.’

On Wednesday, a temporary pump was installed that is intended to bring four million gallons of water to residents.

In the past half-century, the racial composition of Jackson has also changed. Once majority white, it is now more than 80% Black. The suburbs encircling Jackson are generally whiter and more prosperous and have newer infrastructure.

The mostly white, Republican-dominated Mississippi Legislature has been reluctant to offer assistance, even though the problems have disrupted daily life in the Capitol where lawmakers work for at least a few months every year. 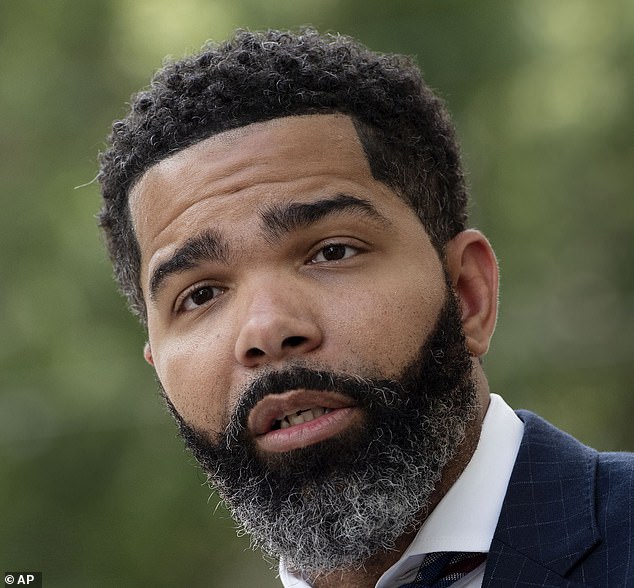 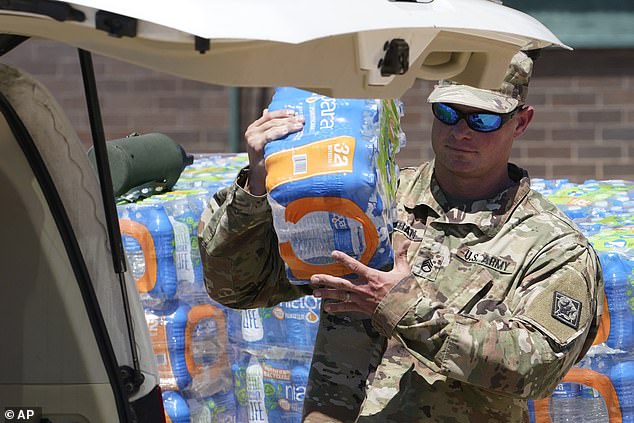 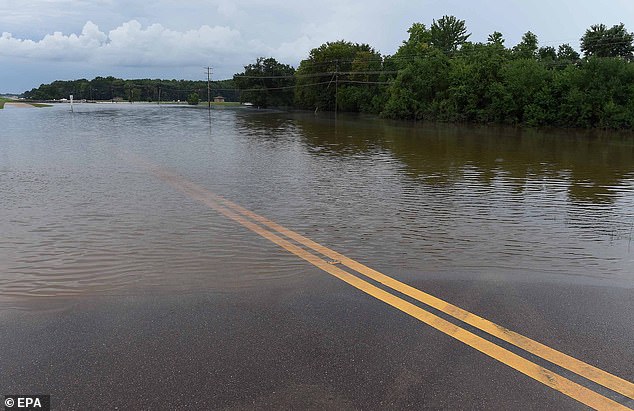 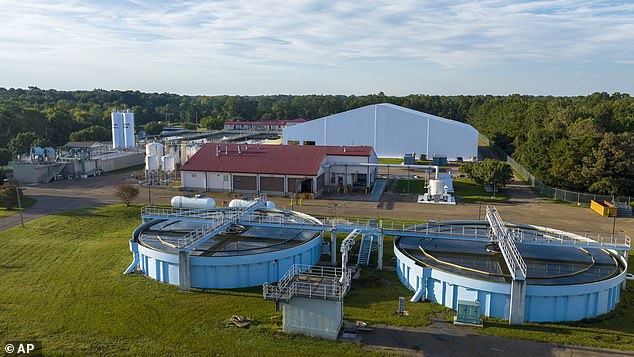 This is an aerial view of of the City of Jackson’s O.B. Curtis Water Plant in Ridgeland, Mississippi

The Democratic mayor and the Republican governor rarely speak to each other. And when Reeves held a news conference Monday to announce a state of emergency, Lumumba was nowhere to be seen. Reeves said he did not invite the mayor.

They held separate news conferences again Tuesday and Wednesday, although Lumumba insisted they are working as a team. By Thursday, the two finally appeared together.

Reeves frequently criticizes Jackson for its crime rate and has said the city’s water problems stem from shoddy management.

‘I know that the team at the state Department of Health as well as the EPA has been working tirelessly since 2016 trying to convince the city to come into compliance with the orders that have been put forth. They were generally unsuccessful at that,’ Reeves said Monday.

Cecil Brown is a Democrat who represented part of Jackson in the Mississippi House for 16 years before serving on the state Public Service Commission. He urged city, state and congressional leaders to work together.

‘If you don´t like each other, it´s OK, let´s say, ‘If we can´t work together, let´s put our staff together,’ Brown said in an interview Thursday.

The governor has blocked some efforts to alleviate the water woes. After the city hired a private contractor to handle water billing, some customers went months without receiving bills, while others skipped payments.

In 2020, Reeves vetoed legislation that would have let Jackson forgive at least a portion of the unpaid water bills for poor people.

Lumumba has complained that Mississippi, a state with almost a 40% Black population, is often overlooked by national Democrats and taken for granted by Republicans.

Criticism about the Jackson water debacle is not strictly partisan.

U.S. Rep. Bennie Thompson, a Democrat whose district includes most of Jackson, said in mid-August that Jackson leaders had not provided specific proposals for improvements.

‘The city fathers and mothers will have to step up, produce that plan that we can begin to sell from Jackson to Washington,’ Thompson told television station WJTV.

An infrastructure bill signed into law last year by Biden is designed to address problems like Jackson’s, but it’s unclear how much of that money the Mississippi capital will receive.

At the same time, Mississippi is slashing taxes. This year, Reeves signed the state’s largest-ever tax cut, which will reduce revenue by an estimated $185 million the first year and $525 million the final year.

The governor argued that cutting the income tax would ‘lead to more wealth for all Mississippians,’ even as one of the poorest states in the nation struggles to support schools and rural hospitals.

Reeves has not said whether he will call a special session of the Legislature before January to consider aid for Jackson. Any proposals will face opposition from some Republicans who say the state should not rescue Jackson from its predicament.

But Republican state Sen. Brice Wiggins of Pascagoula, along the Gulf Coast, said he is willing to help if the aid includes an accountability plan.

‘The state `bailing out´ the city after what appears to be decades long neglect & failed leadership violates my sense of accountability & conservative principles,’ Wiggins wrote on Twitter. He added that he remembers government aid after Hurricane Katrina.

‘In the end, it´s about the safety of Jackson´s citizens & its economic viability,’ Wiggins said.

Even when Jackson is not under a boil-water notice, Sharon Epps said she buys bottled water for her family because she doesn’t trust the tap water. She said her landlord replaced a broken line that spewed raw sewage into the back yard.

‘When you can´t use the bathroom like you want to, and it´s floating in your back yard, that´s the saddest part about it. And then you can´t sit out in the back yard because it smells so bad,’ Epps said. ‘It´s a disaster, baby.’