Empty pubs, deserted shops and a change in attitude: The reality of life under Tier 2 lockdown is revealed as nine million Londoners prepare for new restrictions from Saturday

Birmingham residents have revealed the reality of life under Tier 2 lockdown, as nine million Londoners prepare for the new restrictions to come into force on Saturday.

Boris Johnson divided the country into ‘medium’, ‘high’ or ‘very high’ alert sectors this week after after a 9.3 per cent increase in coronavirus cases on the previous week.

Liverpool was immediately put into Tier 3, the highest level, with Manchester, Newcastle and Birmingham among cities being ranked as Tier 2, or ‘high’ risk. 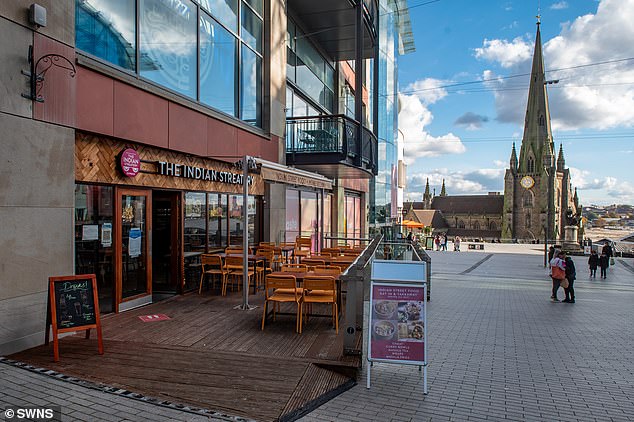 Tier 1 restrictions, which the majority of England have been placed under, are believed to mirror the rules currently in place across the country.

It includes the rule of six, a 10pm curfew, group sport to be played outdoors only and a maximum of 15 guests at wedding ceremonies.

Under Tier 2 restrictions, households are also banned from meeting indoors, even in hospitality venues.

Two households are allowed to socialise outdoors but must stay within the six-person limit and adhere to social distancing.

Draconian Tier 3 regulations have seen restaurants close at 10pm, pubs and bars being ordered to close and households have been banned from mixing indoors or outdoors.

Locals are advised to only leave their areas for essential travel, including work and education, and overnight stays outside of ‘high’ risk areas are banned.

Birmingham residents have now revealed what life is like under Tier 2 lockdown as Londoners prepare for the new restrictions from Saturday.

Locals have said that the West Midlands city has become extremely ‘quiet’ since the regulations came into force on Wednesday, with fewer people going into shops and pubs.

Jordan Hoffman, 44, said that although he is not fazed by commuting under the new regulations, he has an issue with people who do not ‘know how to wear a mask’. 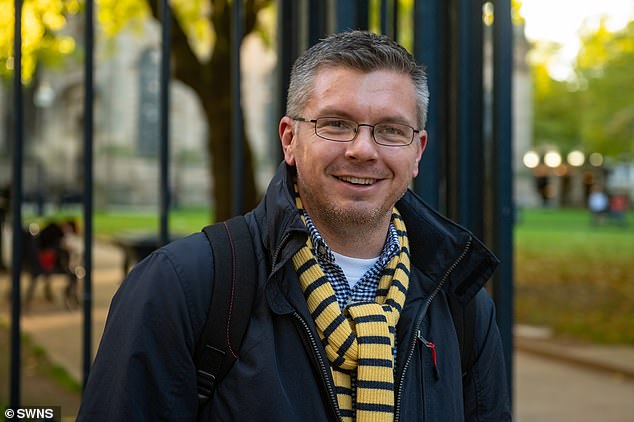 Jordan Hoffman, 44, said although he does not have a problem with commuting in Birmingham, he does have an issue with those who do not know ‘how to wear a mask’

The art gallery manager, who lives in Stratford-upon-Avon, said: ‘I think with the new system, whatever needs to be done should be done.

‘I have been lucky with my work situation and home, as I don’t have kids, it doesn’t have a huge impact on my lifestyle.

‘I know it puts a strain on the hospitality sector and as long as there is support to the affected industries then I am for it.

‘I commuted in today and I just feel like I should get on with it. The trains have been pretty steady and much-reduced traffic from pre lockdown.

‘Everyone is keeping space but some people don’t know how to wear a mask which I have a bit of an issue with.

‘I don’t have any issues with commuting I think we have to retain that sense of normality.’

Mr Hoffman, who is from Atlanta, Georgia, had a holiday booked to head back to the United States but was not able to go.

He has now ‘tentatively’ booked flights for November with the understanding that he will have to quarantine when he returns.

He added: ‘That extra time has been factored into my leave allowance. Fingers crossed we will still be able to go but it will probably be until next year we can go anywhere fun.’

But Birmingham residents have been left divided about travelling amid the new regulations, with some saying they would rather wait until it is ‘absolutely safe to do so’. 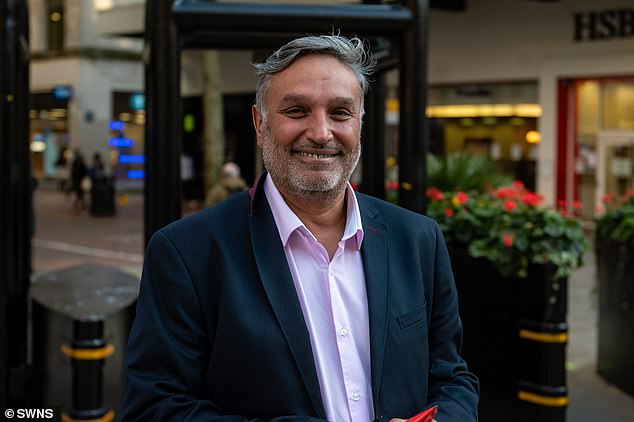 Birmingham residents have been left divided over travel amid the new restrictions, with Abid Mughal, 53, saying there is ‘no chance’ he would book a holiday at the moment

Under Tier 2 regulations, residents are not banned from travelling to a Tier 1 area, but are advised to minimise the number of journeys they make.

The Government has also advised people not to travel to and from higher tier areas unless it is an essential journey, including care responsibilities, work and education.

But many people are still wondering what the new three-tier lockdown system will mean for October half-term holidays as the alert zones are constantly under review.

Abid Mughal, 53, from Sheldon, Birmingham, said that there is ‘no chance’ he would book a holiday for his family at the moment.

Speaking about the current restrictions, he said he used to travel a lot working as an IT consultant but can no longer go to Wales and Scotland, among other destinations.

He added: ‘I used to go to Banbury, Telford, Oxford through work. London is a big no-no now. Tubes and train stations are still the same.

‘With my family, I would say no to travelling now. Unless it is absolutely safe to do so.

‘People I know in London are leaving at 3pm just to miss the tube rush. Euston train station is packed too.

‘We haven’t booked any holidays. Summer holidays are out the window. We didn’t go anywhere this year. The barbecue came in handy.

‘I wouldn’t book a holiday at the moment. No chance.’

The father-of-two said that Birmingham was a ‘ghost town’ six months ago during the UK’s nationwide lockdown, describing the deserted streets as ‘terrifying’. 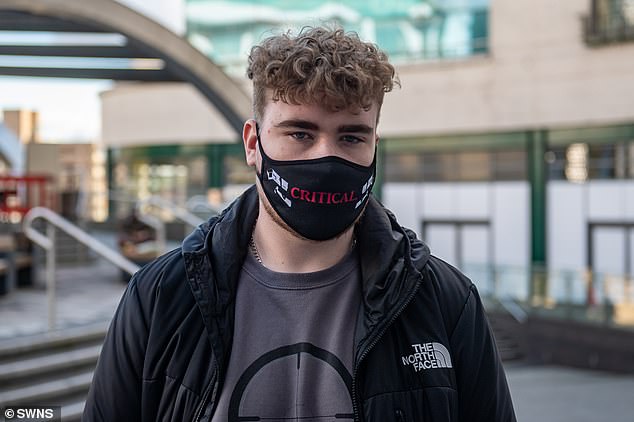 Eighteen-year-old Joshua Orughcon-Powell, who owns a clothing brand, described the West Midlands city as ‘quieter’ under the new Tier 2 restrictions

Speaking about the new regulations, he said: ‘I don’t think the new system has sunk in yet or the fact we are in lockdown again for that matter.

‘Being in Tier 2, people seem to be starting to realise how bad the situation is.

‘I am back in five days a week and I can see the change in attitude. I can walk into a shop and people won’t have masks on.

‘People are handling the goods and just putting them back. You think – that’s a perishable item and someone will eat that.

‘My son is off for two weeks as someone at his school has coronavirus so it is tough. If you look around the city centre today, it is quite busy.’

But Joshua Orughcon-Powell, who owns a clothing brand, described the West Midlands city as ‘quieter’ under the new Tier 2 restrictions.

The eighteen-year-old, from Dudley, West Midlands, said: ‘I was a bit anxious coming in today since it was upgraded to Tier 2.

‘I’m not going to lie it did cross my mind not to come due to coronavirus rising in Birmingham.

‘I have got more comfortable with it the more I have been here and been in shops though, to be honest. 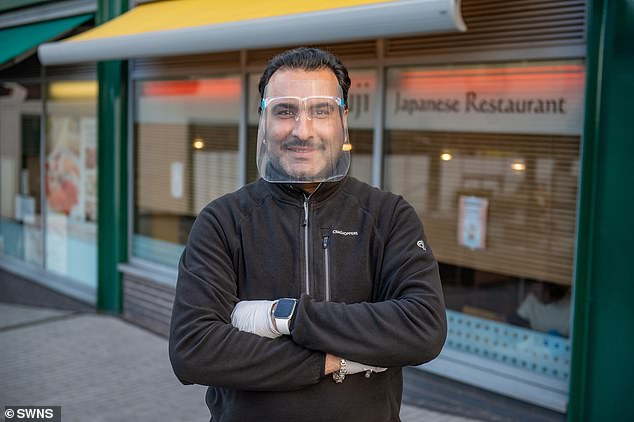 Sanjay Kumar, 45, said that there has been a feeling of ‘unease’ across the city since the Tier 2 restrictions came into force on Wednesday

‘There aren’t as many people in town today it feels like so that helps. It has been alright.

‘I think it is right the city was pushed up to Tier 2 though. If anything it has made it quieter.’

He said that he was worried the city would be ‘heaving’ and social distancing would be ignored, but instead every shop, pub and cafe had ‘hand sanitiser’ available.

He added: ‘I am wearing a mask indoors and outdoors too. I didn’t have any travel plans but I would want to go on holiday.

‘A lot of places seem to be slowly getting there with how to tackle the crisis.’

Another resident has said that there has been a feeling of ‘unease’ since the city was pushed into Tier 2.

Birmingham resident Sanjay Kumar, 45, also said that he believes the Prime Minister is doing ‘good work’ during the pandemic.

Mr Kumar, a shop assistant at St Martin’s News, said: ‘It is a challenging time for everyone.

‘A lot has happened since the pandemic hit the UK in March and I have suffered myself.

‘There is a feeling of unease in the city since it was upgraded to Tier 2.

‘I think Mr Johnson is doing very good work. It is a difficult situation especially having to juggle Brexit too.

‘He has a very hard job on his hands but I think he is doing all he can. 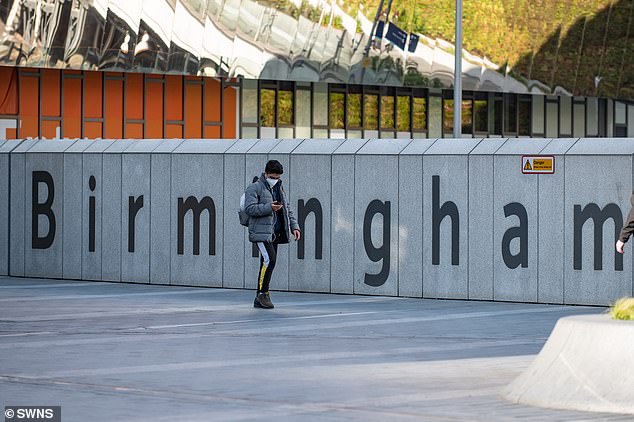 Nine-million residents in London are preparing to join Birmingham (pictured, city centre on October 15) under tougher Tier 2 restrictions from 0.01am on Saturday

‘It is very quiet today for example. There are fewer people coming into the shop and the footfall is down.

‘I don’t travel much and don’t leave Birmingham that much so I can’t say about moving between different areas.

‘I haven’t had any holidays but I would quite like to book one if allowed. Now seems a good time. I wouldn’t be put off.’

The new lockdown measures will be subjected to a four-week ‘sunset clause’ after which they will need to be renewed.

London, Essex, Elmbridge, Barrow-in-Furness, York, North East Derbyshire, Chesterfield and Erewash will move to the tougher Tier 2 restrictions from 0.01am on Saturday.

But there are fears that Birmingham could join Liverpool and become a Tier 3 area as the Tier 2 lockdowns are being kept under constant review.