Vladimir Putin’s armed forces and police have been slammed as sexist for ‘ridiculous and absurd’ beauty contests held to commemorate International Women’s Day.

One such parade organised by the Russian Black Sea fleet labels women sailors ‘military persons of the weaker sex’.

Another pageant called ‘Beauty of the Airborne Forces’ has been staged by the country’s paratroopers in Tula. 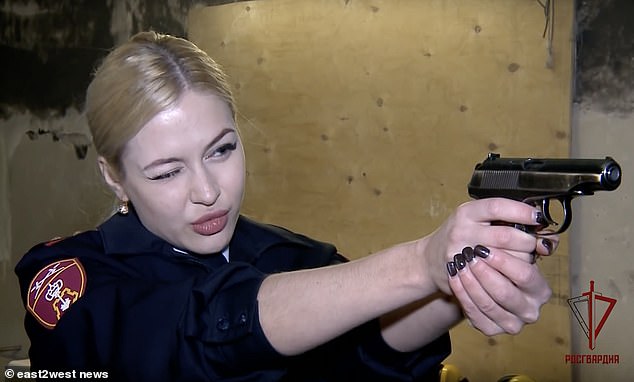 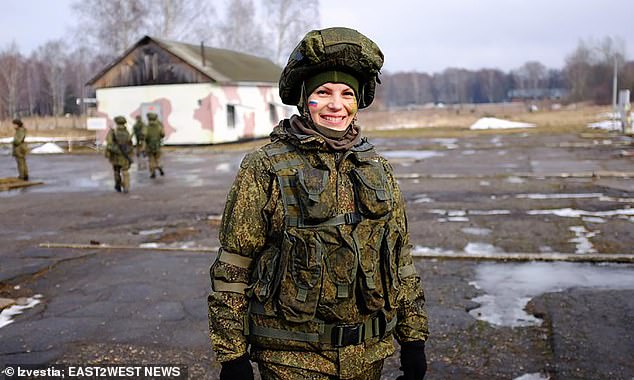 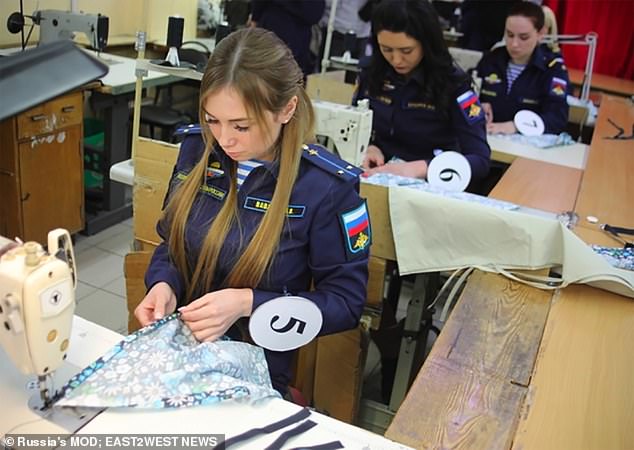 Female paratroopers, pictured, were also put through a sewing contest on the day 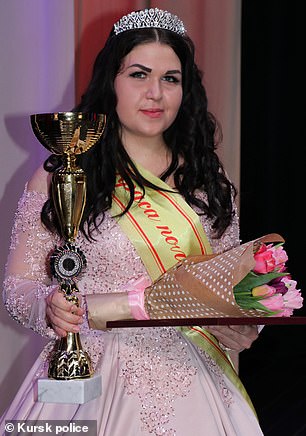 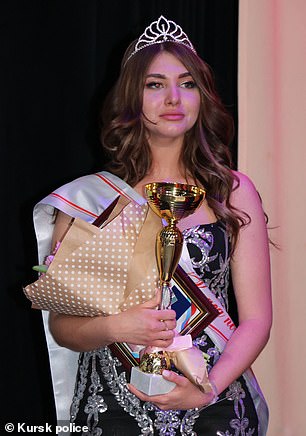 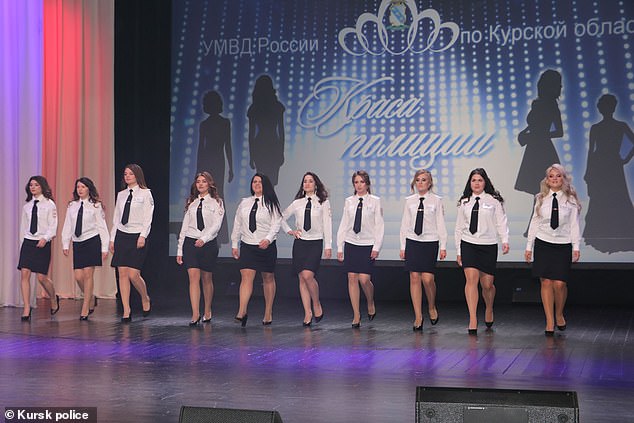 ‘In the course of the contest girls will take part in several trials in which they will demonstrate their beauty, aesthetic excellence, intelligence, (along with) moral and spiritual properties,’ explains the official description.

‘In the course of trials, girls will show their skills in cooking and serving in a Magic Chef contest.’

Female paratroopers are also put through a ‘couturier contest’ in which they ‘demonstrate their sewing skills’.

Critic Anastasia Krasilnikova of Megabitch Telegram channel, said: ‘The winner will be presented with, can you imagine? A diadem.’

The Russian missile forces – in charge of the country’s nuclear arsenal – also have a beauty contest.

Women participants must ‘show their skills and experience in tactical, special, technical, and firing’ as well as ‘physical training’. 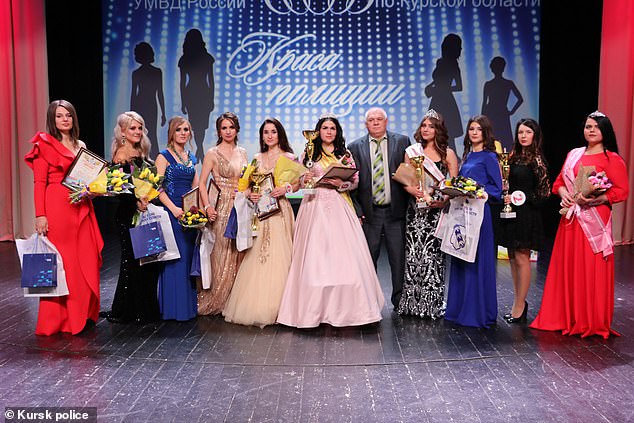 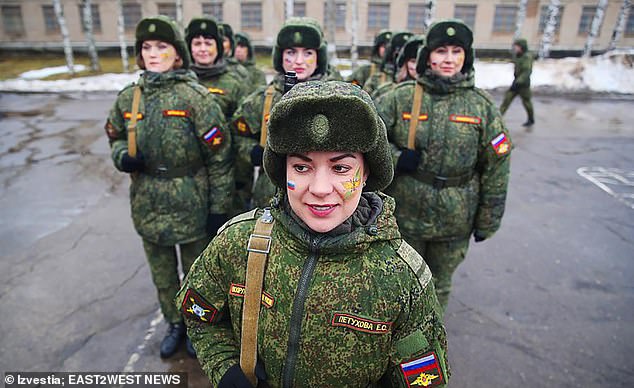 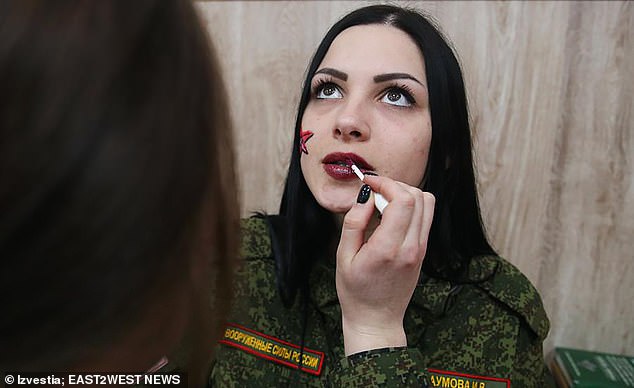 Women participants must ‘show their skills and experience in tactical, special, technical, and firing’ as well as ‘physical training’

In addition, ‘special attention is paid to cooking’, according to the rules.

Here the female troops ‘should show their talents and make at least three low-calorie meals with a basic set of products’.

Police forces around Russia are also holding beauty contests ahead of or on 8 March, one of the most important public holidays in the calendar in this country.

In Kursk, the winner was of the ‘Police Beauty Contest’ was declared as junior sergeant Irina Khodyrevskaya, with the runner-up Lieutenant Kristina Novikova, a detective.

Only policewoman aged under 30 could enter.

The result unleashed a barrage of sexist abuse and vitriol against the victor who was criticised online for her ‘non-standard appearance’ compared with second placed policewoman. 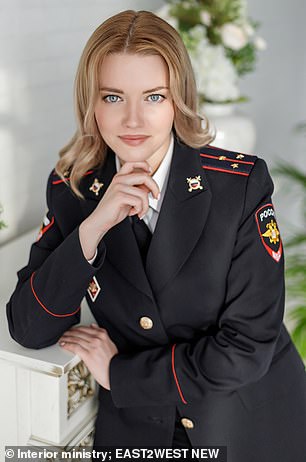 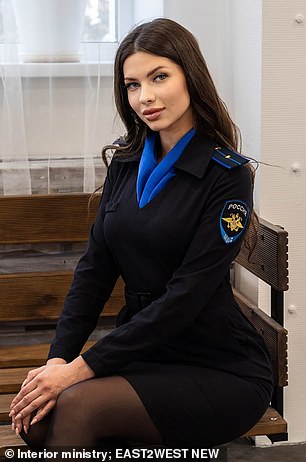 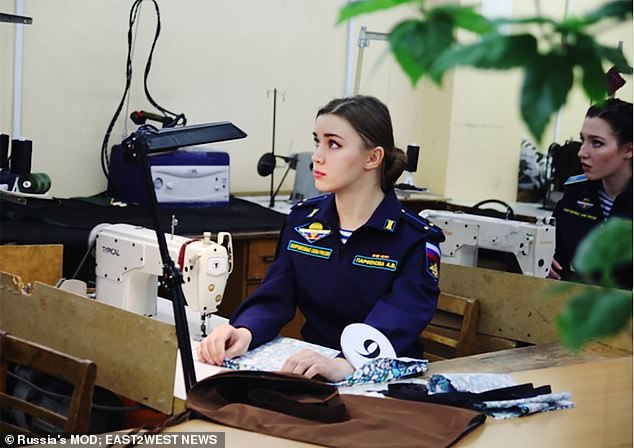 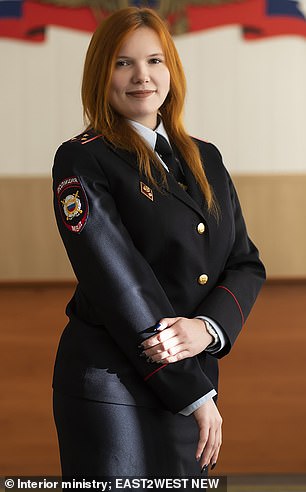 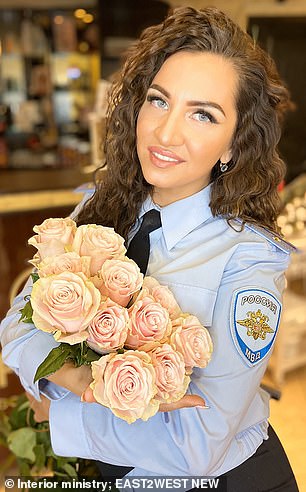 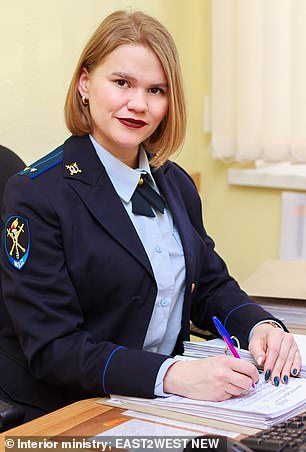 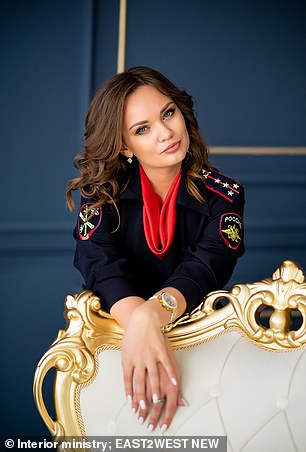 Abusive social media comments claimed the ‘jury was drunk’ in selecting her – and that ‘her father must be a police general’.

A police spokesperson defended the selection saying: ‘The girls were awarded points for well-aimed hits from a Makarov pistol, performing strength exercises, methods of detention, knowledge of the law, and first aid.

‘All these are part of the police officer’s profession.

‘In order to make it interesting for the participants to compete, the organisers came up with various other creative tasks.’

Khodyrevskaya – a patrol officer who rides a police horse – was the clear winner, said the judges, in a contest which also involved parading in evening gowns.

Policewoman participants were required to pose in uniform ahead of voting to find the most glamorous cop. 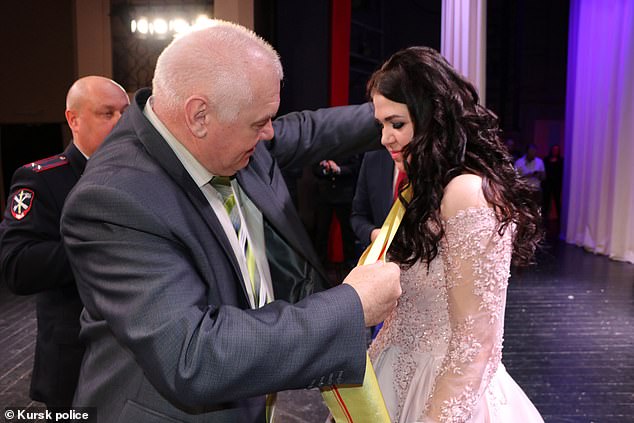 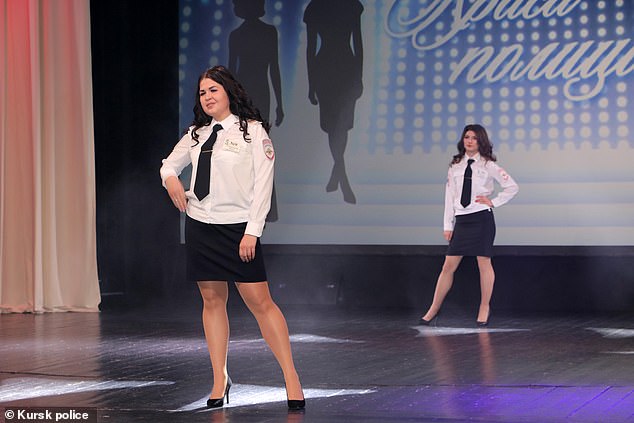 Ms Khodyreva competes in the catwalk section in Kursk, which is on the Ukrainian border 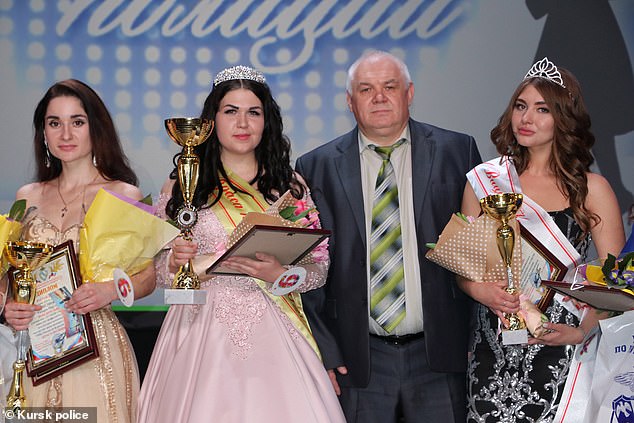 In another such pageant, a 31-year-old mother of one Anna Khramtsova last year beat 1,000-plus entrants to win a Russian National Guard contest, a force which reports directly to Kremlin strongman Putin.

‘I find it all incredibly ridiculous and absurd,’ said Krasilnikova.

‘Even women who are paid to defend our country and who professionally use weapons must ‘be beautiful’ and prove to someone that they can sew and make low carb meals.

‘Male service personnel do not have this kind of contest.

‘We live in a fascinating society where women can be in the army, yet they have to continue to delight someone’s eye and stomach – and be knowledgeable in mastering sewing tools.

‘This is nothing but sexism.’ 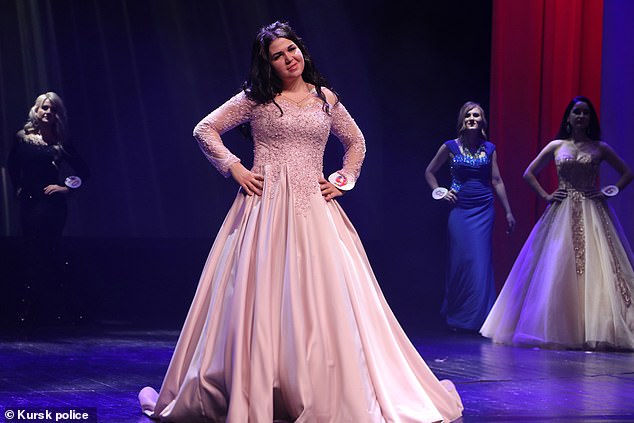 Russian Ms Khodyreva wearing a pink dress during the competition 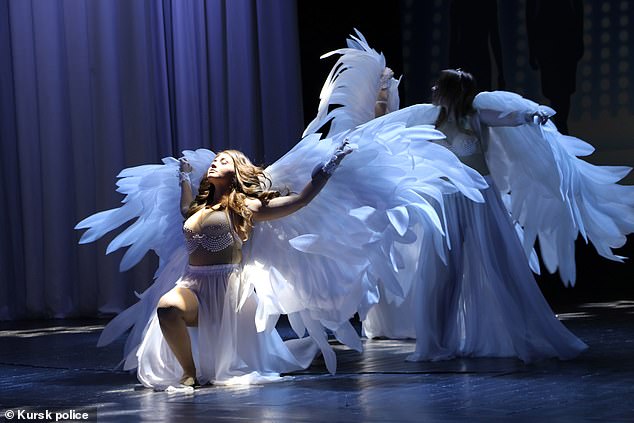 While accepting her award Khramtsova, a gun-toting ensign, openly acknowledged sexism in the 340,000-strong force.

She said: ‘I do get to hear those old jokes about blondes in service.

‘But I ignore them – and just serve stylishly.’

She is from a military and law enforcement family, with her father in the army and police for 30 years and her mother also in uniform.

‘I am proud to continue the dynasty,’ said Anna, from Yekaterinburg, revealing she had previously served in the police and has a law degree.

Showing her shooting skills, she said: ‘Most important is to pull the gun out calmly, to aim and breathe out.’

She chose her black manicure colour to match her gun, she said.

An unnamed male colleague said of the junior officer: ‘First of all she is a member of the National Guard team, and only then a woman.

‘Of course she looks after herself, uses makeup and checks how she looks in the mirror.’